Age of Empires II: Definitive Edition is a remastered edition of the real-time strategy video game called Age of Empires II which was released back in 1999. The Definitive Edition offers an original AoE II experience enriched with multiple features and additions that make the game much more enjoyable to play in the modern times, as players are now more demanding than they were when AoE II was originally released. These include the 4K support, an in-game zoom option, a set of useful built-in mods and mod support, online matchmaking features, and more. The game was developed by Forgotten Empires, Wicked Witch Software, and Tantalus Media, and it’s released in November 2019 by Xbox Game Studios.

The game does not have a strict story, but it comes with several different campaigns, and each of them focuses on a different civilization. Campaigns consist of a series of scenarios that are based on historical or mythical events, and they also feature cinematic cutscenes. You will be able to follow Celts, Mongols, Huns, Aztecs, and more, including four completely new civilizations that were made exclusive to the Definitive Edition as a part of The Last Khans content expansion.

The core gameplay in Age of Empires 2 Definitive Edition didn’t change too much when compared to the original AoE II game. It’s still a good old real-time strategy game, where you need to send workers to gather resources, build your base, recruit an army, make research, and use the technological advantage to surprise and wipe out your enemies. 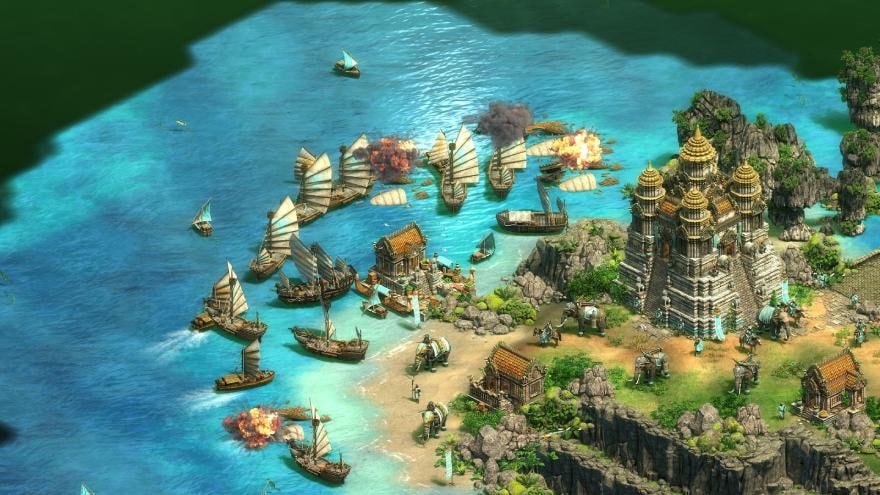 There are, however, certain changes and improvements, that especially the returning players should be aware of. These include balance changes based on the community feedback, simultaneous research and unit build queues, and an ability to auto-reset fish traps. There are also certain useful built-in mods available out-of-the-box, such as the grid mode and small tress, which is very convenient.

It’s also worth mentioning an introduction of a new AI, which, unlike the old one, does not resort to simple cheating. Now it’s fair and just plays smart, providing a much greater challenge for those who enjoy a single-player experience or those who wish to improve their skills before trying to play against other people online.

The game offers single-player scenarios and campaigns, as well as multiplayer skirmishes that can be competitively played online with other people. Definitive Edition comes with some important improvements in multiplayer, namely matchmaking features, integrated leaderboard and ladder, and support for crossplay between Steam and the Microsoft Store, allowing players to play together no matter the platform.

According to the pre-release reviews, the Definitive Edition of Age of Empires 2 is going to meet or even exceed critics’ expectations. Reviewers mostly agreed that the strongest point of the Definitive Edition is the introduction of certain new features and quality of life additions without sacrificing the spirit of the original game. This means it is still a good old AoE II game, but it much better fits the modern times now.

Warning! This game is region locked can NOT be activated in United Arab Emirates.
System requirements