In Colt Express, you take on the role of a bandit trying to rob a train ... by accident at the same time as other bandits. Your goal is to collect as much wealth as possible before others grab it. The game lasts 5 Rounds. Each Round has 2 phases:

Phase 1: Planning! Each player plays 2 to 5 cards in one pile, face down or face down, depending on the round. Instead of playing a card, a player may draw 3 cards from his deck.

Phase 2: Heist! Cards are played in the order in which they are placed, with the risk of failure to implement the plans. It is not always possible to predict opponents' moves and remember what happened by yourself ...!

The game takes place on a three-dimensional model of a train, where bandits can move between carriages, run on roofs, fight other bandits, shoot them, rob passengers or move the sheriff. The train has as many cars as there are people playing, each car is full of passengers, and you have jewels, suitcases and bags with valuable contents. 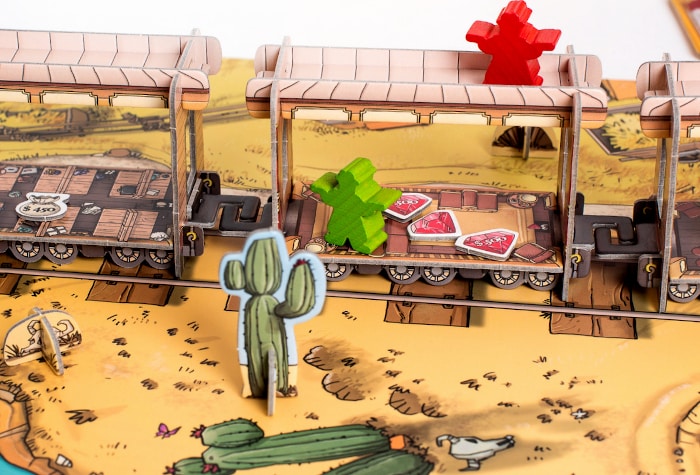 As the game progresses, the events during the game will be determined by the round cards, which will indicate how many action cards will be played. In addition, they also contain icons of special events, which show whether we are going through tunnels (then we play the card facedown, which can cause even more confusion), whether the train accelerates or brakes (we move the characters on the roof back or forward), maybe indicate that the passengers will revolt by starting a fight with the bandits, or the sheriff will start shooting the characters on the roof, etc.

The game ends after 5 Rounds, then each player adds up the value of the Loot tokens collected on his Character card and a prize is awarded to the Best Gunslinger. It is awarded to the player or players who fired the most shells during the game.

The game has won the prestigious Spiel des Jahres 2015 award.