Death Stranding is an action game developed by Kojima Productions and published by Sony Interactive Entertainment and 505 Games. It’s the first game made by Hideo Kojima after his highly public separation from Konami. Death Stranding’s story is set in an open world, post-apocalyptic environment, where the player character Sam works as a deliveryman.  The gameplay include delivering cargo to various places on the map, fending off monstrous creatures as well as bandits inhabiting the vast wastelands of former the United States. The game, similarly to Metal Gear Gear Solid V, features asynchronous multiplayer, where participants can leave supplies and messages for each other in the game world. Death Stranding received positive reviews from the critics, who praised the games scale, design, graphics, voice acting, and soundtrack. 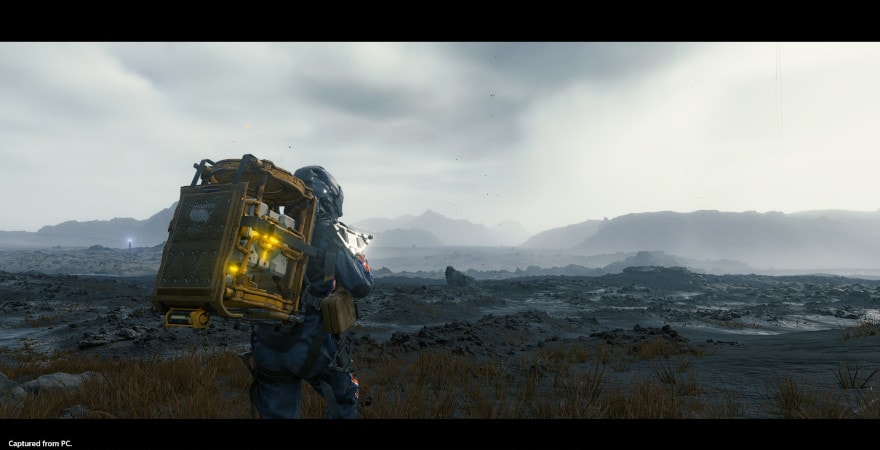 Gameplay unlike any others

Death Stranding is a third-person perspective action game, where the player controls their character in an open world environment. The protagonist, Sam, is a deliveryman, transporting various cargo across the post-apocalyptic landscapes of the USA, earning money and reputation for his job as a deliveryman.

Delivering transports is an essential part of gameplay mechanics. The player has to consider several factors before making a run to his destination. For example, the weight and packaging of the cargo might influence Sam’s navigation of the area. After a successful run, Sam’s performance is evaluated and points awarded for the completion of the task can be spent on upgrading statistics, like the amount of weight the character can carry or the stability of the cargo.

By delivering cargo to various cities on the map, Sam expands the Chiral Network, which provides the means of contact across vast territories. Expanding the Chiral Network gives the player access to maps and blueprints, with which they can create useful structures, like bridges and generators. The Network is also the basis for the online functionality featured in DS.  The Network allows players to interact with each other within the game world.

Death Stranding features intriguing fighting mechanics. The main enemies of the game are bandits of the MULE group and BTs – “beached things”, creatures visible only to some. These creatures cause the bodies of their victims to explode, creating “Voidouts”. Sam is a person known as “Repatriate”: upon death, he can return to life by swimming from the Beach – a place on the edge of life and death.

The combat mechanics in DS are similar to those in other TPP games. The player has an arsenal of different types of weapons at their disposal, from handguns to a rocket launcher. A special weapon called Anti-BT gun can also be used. This non-lethal handgun draws blood from special packs and uses it as ammunition to paralyze the beached things. If Sam doesn’t have any blood packs left, the gun will draw blood from his body. The player can also use grenades and melee weapons. 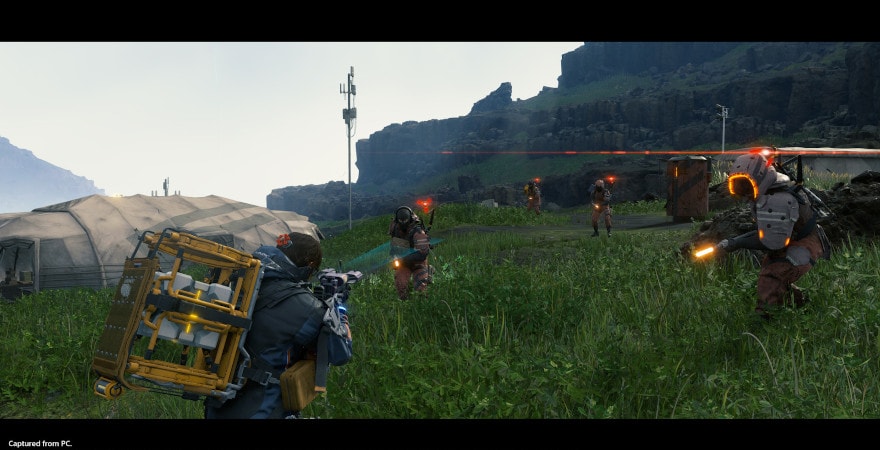 Story of a savior

The story takes place in the post-apocalyptic United States of America. Due to the emergence of BTs, the human population has been decimated. The survivors live in colonies known as KNOTs, with the wastelands between them controlled by MULE, a band of thieves and murderers. Only Porters, equipped with Bridge Babies and armed to the teeth, are able to travel between the KNOTs, delivering supplies and performing other odd jobs.

One of such porters is Sam, working for the Bridges company, belonging to his family. Sam Porter Bridges (Norman Reedus) is tasked by his dying mother to help restore the civilization in the US. Reluctantly, Sam agrees, and together with BB-28, a Bridge Baby, he embarks on a supply run to connect all the scattered colonies within one network, planting the seed for the rebirth of the old world. Along the way, he will encounter various people, friends old and new, as well as Clifford (Mads Mikkelsen), a man with whom he will create an adversarial relationship.

Death Stranding was received favorably by the critics. Reviewers praised the story of the game, the performances of actors portraying the characters – with special mentions of Reedus, Mikkelsen and Lea Seydoux, as well as the unsettling soundtrack of the game. Writing of the mechanics, critics noted the innovative mechanics and gameplay features, which separated DS from other games currently available on the market.  All in all, Hideo Kojima’s opus was considered a worthy piece in his artistic portfolio.