Mario Kart 8 Deluxe is a kart racing game for Nintendo Switch released in 2014 as an enhanced port of the standard MK8 from the Wii U. In this game, you choose one of the many available characters from the biggest roster yet, and then pick your kart and start racing in one of the classic or battle modes. You can play it against the AI or with your friends as well as through the internet with other kart racing enthusiasts.

In this game, your goal is to win kart races or get as close to the first place as possible and at the same time, halt other players from doing so by using various power-ups from boxes placed on the tracks. Before starting the race, you choose your character from an extensive roster of previous Mario, as well as other game series like The Legends of Zelda.

Additionally, you choose your vehicle, which can be created from different parts unlocked during the game and each part gives you different statistics such as acceleration or handling. You can play Mario Kart with up to 12 players online or via the local multiplayer mode. You can even use voice chat but only with the people from your friend list. 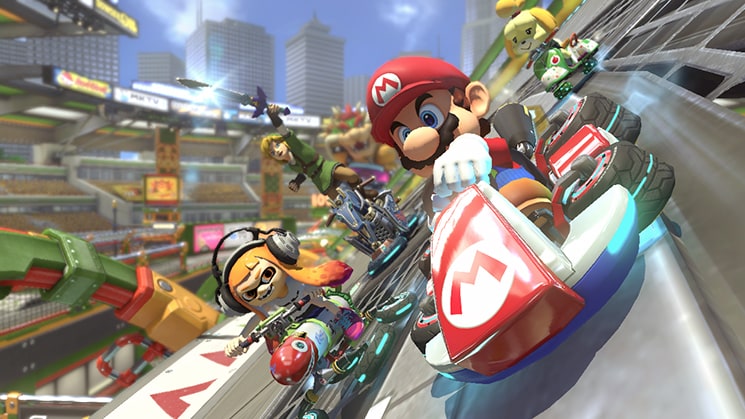 For the features reserved specifically for Mario Kart 8, you can try out anti-gravity racing and feel the difference in the view as some parts of these tracks allow you to drive on the ceilings and walls. New characters that were added in this edition of the game include Pink Gold Peach, Koopalings and Baby Rosalina.

As for the new items that are going to help you to push your opponents far away you now have: the Boomerang Flower, the Super Horn which can be used to attack nearby opponents or as a shield to defend yourself from the incoming attacks even from the Spiny Shell! The Piranha Plant attacks nearby opponents and the Crazy Eight allows you to choose from the eight different powers.

In the Deluxe version, you can find characters that were unavailable to play in Mario Kart 8 without buying them separately, but here, these characters are playable from the very beginning. Characters can now hold two items at a time to use the right one when the time comes. Additionally, the game presents players with two assisting functions smart-steering and auto-accelerate, which make it easier for the beginner players to stay on the track and keep control over the kart.

Enjoy the Battle Mode exclusively enhanced for the Deluxe version, now in the style of an arena battle. You can take part in a number of different styles of the arena, such as the classic Balloon Battle or Renegade Roundup which plays like a game of the cops and robbers. During the game, the player on the lead is marked by a crown worn by their character. You also have the combat log on the bottom of the screen thanks to which you can see who hit whom. 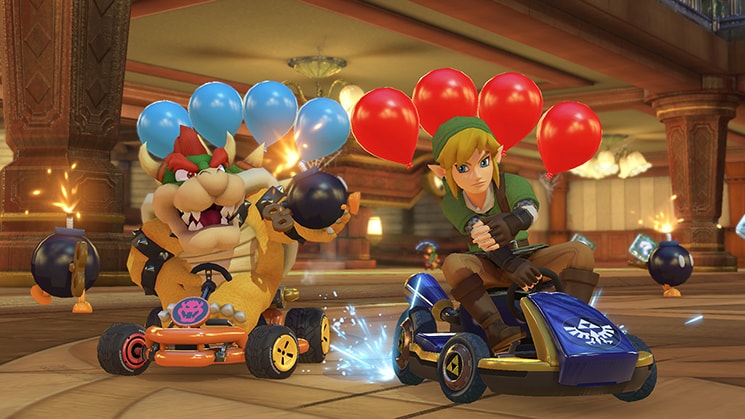 MK8 Deluxe received universal acclaim with players and critics praising the enhanced experience of the original Wii U release. This version of the game proved an excellent combination with the portable nature of the Nintendo Switch console granting it the title of one of the best-selling games in a number of countries.