Drone Swarm is a tactical real-time strategy game developed by stillalive studios and published by Astragon Entertainment. The player controls a captain of a ship able to deploy thousands of combat drones. Their task is to find a new hospitable planet after the Earth is destroyed in an alien attack. The gameplay focuses on the player strategically using the drones to overcome their enemies and defend themselves from their attacks.

Drone Swarm was met with positive critical reception, with the reviewers praising the title's mechanics and visuals.

DS offers the players a unique gameplay experience. Controlling the swarm is very intuitive - the machines can be used either defensively or to attack the enemy units. All this is done with a click of a mouse. The game, however, is by no means easy. The player will encounter different enemy types and travel through dangerous environments. Upgrading their defenses and attack power will be crucial to survival in the depths of space. 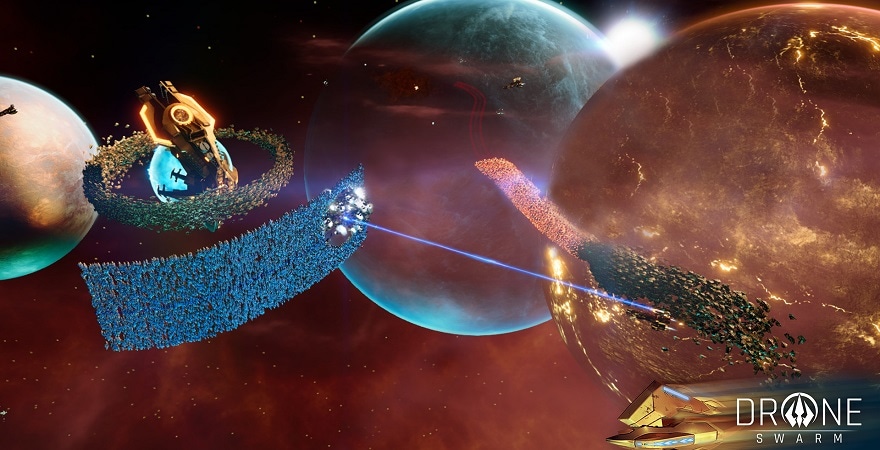 Aside from the drones, the player can control their mothership. This powerful vessel can also be upgraded with various weapons to provide additional firepower to the players' drone attacks.

In the early 22nd century, the Earth was decimated by the attack of an alien race, who used drones to lay waste to humankind. Those who survived managed to use repel the attack with the help of powerful individuals possessing psionic abilities. They were able to control the drones and turn them against their masters. The invasion was thwarted, but the Earth could no longer sustain life. The psionics were sent into space to locate a new, habitable planet. Armed with an army of drones and a powerful mothership, they brave the vast universe in search of humanity's new home.

Drone Swarm was met with a positive critical reception. The game was praised for its gameplay mechanics, especially for the creative use of drones. The gameplay was considered one of the most fun elements of the game. The reviewers also noted the visual side as a positive.