Fall Guys: Ultimate Knockout is a great new way of having fun during the craziest parties. The gameplay is based on the battle royale mechanics, which means that the last-man-standing rule applies to the mini-games included.

The candy-like style of this party game is full of colors and the funny sounds which accompany the players’ struggle for the victory in the most unusual mini-games ever. The mini-games are chosen randomly when the players join the room. The group of the contestants go from one mini-game to another, while reducing their number by those who get eliminated in the process. 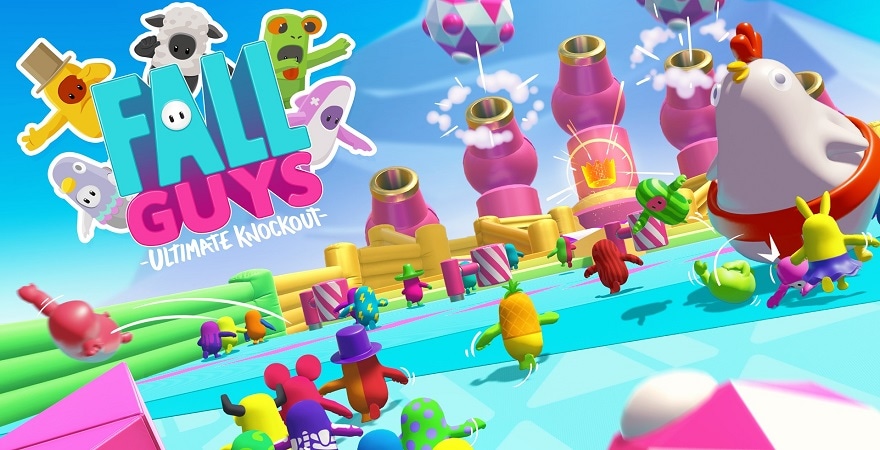 The mini-games featured in Fall Guys: Ultimate Knockdown mostly involves a lot of running, jumping, dashing and other ways to move your jellybean-like character in order to beat your rivals.

To name just a few examples, Jump Showdown, Roll Out, Egg Scramble, Block Party, The Whirlygig. Without going into great detail, generally speaking, the mini-games in Fall Guys gets easily classified among three groups: racing, survival, and team-based matches. Each of the mini-game differs in terms of the gameplay and the factors it requires from the players. Some will depend more on the actual skills in maneuvering those funny jellybeans, while some others will be more of pure luck – but, what is most important here, each and every single mini-game in Fall Guys is full of funny moments to enjoy.

Most mini-games include various obstacles in forms of lowering gates, rotating pillars and platforms and other things that can easily make the players’ jellybeans fall (which is tantamount to a failure). The fast-paced gameplay requires the players to move fast in order to avoid elimination.

For winning the matches the players get the in-game currency called “Kudos”. Those are points that can be spent on customizing players’ avatars. There are plenty of options and costumes to choose from.

The game also features the premium currency (the “Crowns”) which can be bought through the micro-transactions. It grants access to a great number of cosmetic items.

Another thing is that among all of those costumes the players can also find such outfits that resemble some well-known pop-cultural icons, such as Gordon Freeman from Half-Life 2.