Created by Ubisoft Montreal and released on March 27, 2018, Far Cry® 5 is the fifth installment of the best-selling cycle of first-person shooter (fps) video games. The game, like the previous parts, impresses with great graphics and an unusual soundtrack, in which we have both popular songs known from radio stations and original compositions.

The game diagram itself is quite simple. The player is introduced to a completely new area called Hope County, which offers great views characteristic for the American state. He has a mission to do, and only from him depends on how he deals with it. He will be helped by new, deadly weapons and vehicles, thanks to which he will be able to traverse the wild forests, lakes, and pastures with no problems. An interesting novelty in the game which is worth mentioning, is the lack of towers and a mini-map. From now on, to find the way, the player must use skills what only shows that the creators are focusing on has more and more realism. 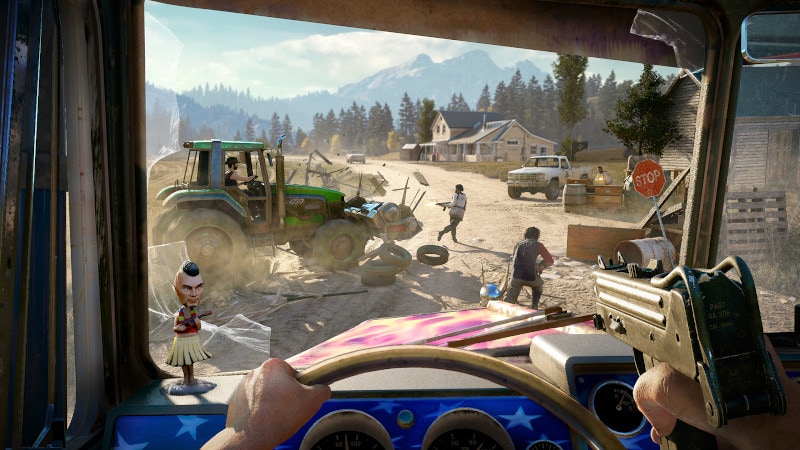 Similarly to the previous parts of the series in Far Cry 5, the action is presented from the first person's perspective. At the very beginning, the player creates a character. He can choose both his appearance and gender. Then, thanks to the experience gained in the game, he can develop special, very useful skills of his character, which will help him in an open fight with opponents, as well as those focused on silent elimination of opponents. Interesting in Far Cry 5 is also the fact that the game can be completed not only alone but also in the company of the other player. The cooperation mode (co-op) introduced by the creators covers the entire campaign and all side activities.

Action Far Cry 5 takes place in the fictional Hope County located in the US state of Montana. There, the player takes on the role of a policeman or a policewoman whose task is to discover and destroy a fanatical religious cult. At the head of the sect stands Joseph Seed, in a ruthless manner dealing with those whom he considers being enemies. However, before the player deals with him, he must liberate the three main regions of Hope County, management by two brothers and the half-sister of the main antagonist. Of course, it should be added that the protagonist does not only work alone and can always count on the help of characters encountered during the game, such as sniper Grace Armstrong, pilot Nick Rye, helicopter pilot Adelaide Drubman, and known from previous parts Hurk Drubman Jr.

The Far Cry 5 for PC received positive reviews. First of all, the players have been liked the open world that the game offers and the presence of many enemies and allies. For the vast majority, the main advantage was the great freedom in attacking opponents and powerful explosions against the backdrop of majestic nature. The players were also approvingly rated many other elements of the game such as a big map, immersive missions, fantastic music, the possibility to search abandoned houses in the woods, and factories, as well as the presence of a charismatic, intelligent antihero. Additionally, according to reviewers, on appreciation deserve also references to American culture and stereotypes, as well as a system for acquiring tasks from independent people, which has been improved compared to previous parts of the series.

Warning! Product is region locked and CAN be activated and played in Europe
Languages