It goes without saying that Razer is one of the best gaming gear company in the industry. Winners of several awards, including Techspot’s Outstanding Product Award for their Deathadder Elite gaming mouse, the Razer brand has become a staple of quality among the gamers around the world. Razer Basilisk continues in the line of choice products. This mouse is outfitted with state-of-the-art technologies which make the gaming experience even better. With features like Dpi clutch, wheel tensioning and HyperShift, Razer Basilisk FPS Gaming Mouse sets an entirely new standard of hardware for gamers.

One of the chief features of Razer Basilisk FPS Gaming Mouse is the Dpi clutch, resting right under the user’s thumb. This special button changes the dpi with one flick. In short, the clutch will allow players to increase the dpi for fast-paced gaming, which requires high sensitivity and reaction speed, and lower it when the player needs more focused movements, for example, in precise aiming scenarios. Hence it was dubbed the “sniper mode” toggle. The clutch is very easy to use:  it responds to the lightest touch and it’s positioning near the thumb rest makes it a perfect addition to the usual set of mouse buttons. 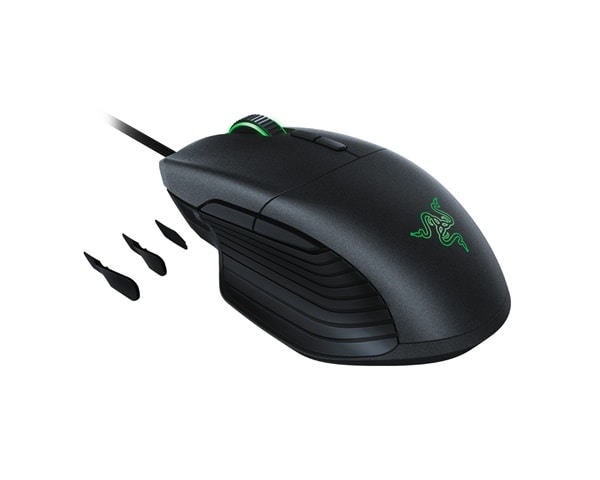 During intense battle scenarios, mastery of the scroll wheel is imperative. However, sometimes the wheel’s sensitivity can work against the player, be that during weapon select or other actions. Razer Basilisk FPS Gaming Mouse comes outfitted with a dial that allows the player to change the sensitivity of the scrolling wheel. You can set the resistance to your preferable level and enjoy precise scrolling

Last but most certainly not the least of Razer Basilisk’s excellent features is HyperShift. It allows the user to program an additional set of commands to already programmed buttons. HyperShift is a feature that is very easy to use. First, the player programs one of the mouse buttons to enable HyperShift, then they program them with the second set of commands. It is a very helpful feature, which allows the player to contain many of the actions only to the mouse. Like many other Razer’s devices, Basilisk FPS Gaming Mouse received near-universal acclaim. Reviewers praised slick design, comfortable grip and the number of programmable buttons. The features of Basilisk were likewise praised for their intuitiveness and applications. Special mention in that area went to Dpi Clutch and HyperShift. Reviewers pointed out that the latter, while still being niche, could prove to useful in matches. Another feature praised by critics was the DPI, which could go up to 16 000.

With G2A.COM, Razer Basilisk FPS Gaming Mouse, a truly quintessential gear, can be yours at a very attractive price. If you’re looking for something else, or want to buy a matching keyboard and headset for your Razer Basilisk mouse, you can use G2A.COMs browser to find them.