Taking place in an ingenious universe, Iron Harvest introduces the player the realities of the 1920s Europe, enriched by characteristic Steampunk technologies. The world designed by Jakub Różalski drew the attention of many RTS enthusiasts, making Iron Harvest one of the most anticipated titles.

Find yourself in the new order

Turning the corner after the WWI, Europe rises in a new reality, being divided between three major empires—Saxony, Polania Republic and Rusviet. Reflecting the contemporary countries of Germany, Poland and Russia, each of the powerhouses has its own characteristics. Defeated in the First World War, Saxony persistently tries to rebuild its position. Polania, being largely a rural country, has its interest in maintaining the beneficial status quo in Europe. Rusviet, struggles with internal problems.

Grigori Rasputin’s revolution reaps its harvest, gradually weakening the position of Tzar Nicolai. Standing before huge challenges, Europe will need some really knowledgeable leaders, able to carry it through the turbulent times. Will you be one of them? Test your military and economic expertise in one of the most compelling contemporary strategic games.

Inspired by Company of Heroes or Men of War, Iron Harvest’s gameplay constitutes all the features of a well-designed real-time strategy. Being a feast for all tactic-maniacs, it gives the player a total control over diverse units, including various infantry divisions, as well as steampunk mechs. 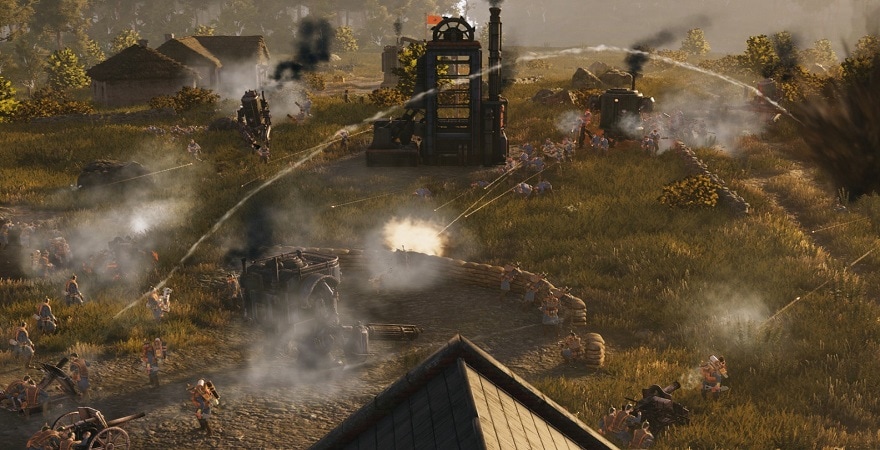 Apart from that, each of the factions has its own special character providing unique strategic possibilities. The game takes the player onto large, open maps, each forcing the player to adopt a thoughtful strategy. This includes not only properly directing the units, but also reacting skillfully to the dynamically changing, destructible environment. All the characters, as well as the machines have been carefully designed, reflecting well the unique climate of the interwar times.

Drawing upon the best titles in the genre, Iron Harvest features a comprehensive campaign mode that can be played both solo and in co-operation, where the players control half of the army. The developers prepared over 20 missions divided into 3 campaigns. Check out also the multiple single battles you can play against AI. Discover special scenarios concealing unique, rewarding challenges. Of course the game could not call itself a strategy without the classic multiplayer gameplay.

Diversified and well-balanced, the game will provide long-lasting entertainment, supporting both more and less experienced players with various tasks and bonuses, adequate to their game experience.