Ever wanted to command a small squad to prove your worth on the battlefield? Or maybe leading an entire army sounds more exciting to you? And what about ruling whole nations, watching them grow more powerful over decades, up to the point where conquering the world is at your fingertips? That’s exactly why strategy games were invented – to allow you to put your strategy skills to test, no matter the scale of the conflict.

Strategy games can be very different, though usually it’s all about war and utilizing unique abilities of commanded units to exploit vulnerabilities in enemy defenses. Strategies require careful planning and knowing units through and through. For example, in a medieval strategy, you wouldn’t usually want to send your cavalry charge the pikemen because it would result in heavy loses for your unit and minimal loses for the enemy. Strategizing in these games is often a matter of choosing the right counter for each encounter.

The scale of the battle may be different, depending on a game. Some titles let you command a simple squad consisting of just a few soldiers, while others may allow you to lead twenty thousand-men armies to battle. The goal is usually the same, however – to use your resources and manpower the best you can and force your opponent to waste theirs, just like you would in a game of chess.

Sword against sword, gun against gun. Small scale, large scale, real-time, turn-based. Base building, no base building. Medieval. Modern times. Future. Strategies indeed come in a variety of types and shapes, and this is a great thing – this way everyone can find a game to enjoy. Without further ado, let’s take a look at some of the best strategy PC games to play in 2019.

Total War series brought us multiple phenomenal strategies over the past 20 years – entire franchise already counts over 10 different games. Total War: Three Kingdoms is the most recent member of the family and focuses on the so-called Three Kingdoms period, rough times for Chinese history.

The ultimate goal of the game is to conquer all rivals and unite China under your banner. It’s worth noting that the game features two separate game modes – and one of them is romanticized version of the story, where your heroes possess unnatural strength, equal to the power of a small army. The game also introduces a nice little addition in the form of duels, allowing generals to engage in showy one-on-one combat.

Turn-based strategy
One of the games that many players were waiting for, Total War: Three Kingdoms is the twelve standalone main game in the Total War video game franchise. The series returns...

It would be hard to find a strategy fan who didn’t hear about Europa Universalis – a game so complicated it could take hundreds of hours to learn to play effectively, yet very rewarding when you finally grasp the basics.

As a ruler of the chosen nation, you need to take care of its diplomacy and economy, as well as maintain an adequate army to ensure the safety of your own people. Enter alliances, make trades, declare wars, spread religion – conquer the world and claim it. Unlike most strategies, Europa Universalis IV focuses on the real-world history allowing us not only to become the head of historically accurate medieval kingdoms but also experience some of the most influential historical events like War of Roses.

Grand strategy
Take control of a nation and reshape history for good or ill. Conquer provinces, establish diplomatic deals, and bring forth an era of rapid economic growth. Can you handle managing...

Another title from Paradox, though it shares some similarities with Europa Universalis IV, it is, in fact, a completely different game with different mechanics and which puts emphasis on different aspects of the gameplay.

It’s more newbie-friendly, but saying it’s an easy game would be a huge over-interpretation. Instead of focusing on a nation, Crusader Kings II revolves around the royal family. Your main concern is to ensure there is always an heir to the throne ready to take over because the game will end if the ruling family leaves no descendants. Genetics system and trait inheriting are interesting additions, forcing you to think twice before deciding for a marriage.

RPG
The best dynasty simulator in the history of gaming. Crusader Kings 2 is a grand strategy developed by kings of the genre: Paradox. Instead of broad kingdom control, CK2 put...

Sid Meier’s Civilization VI, similarly to the previous games from the franchise, lets you become the ruler of one of many famous civilizations to lead it through ages, develop it and make it prosper. It won’t be an easy task, because your nation is not the only one with ambitions to become the most influential power on Earth. 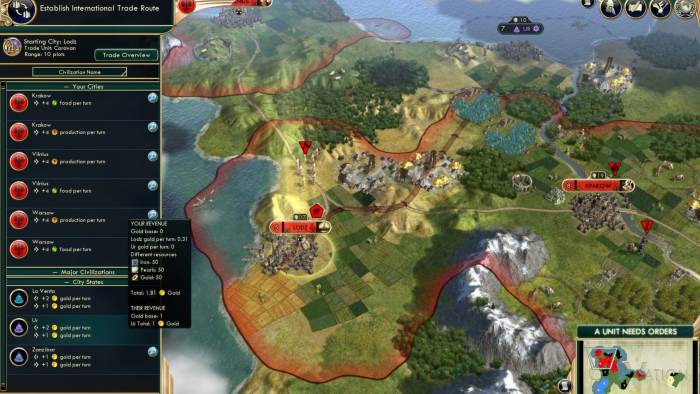 There are multiple ways to achieve this goal, not just a military one. Depending on the chosen nation you may want to focus on developing new technologies or propagating religion instead, which will allow to meet Science or Religion victory conditions, respectively. What makes the game quite different from other turn-based strategies is the fact it takes place on the hexed map.

Now that was unexpected, right? But unnecessarily – designing a large and well-functioning city indeed requires a lot of planning and strategizing, so the game fits the list perfectly. Cities: Skylines is probably the most successful game of its genre since SimCity 4 which was released back in 2003.

Here you will be able to both plan the city and manage it. Build roads, designate housing and industry areas, provide the city with electricity and water, give citizens access to schools and universities, build police stations and fire departments, take care of the public transport and watch your city grow. The amount of content available is overwhelming and a solid bang for your buck. If you find the title interesting, you may also want to try one of its multiple expansion packs, each adding even more functionalities to the base game.

City-builder
Colossal Order has been dealing with cities for a while now but from the transportation perspective. This is their attempt at SimCity like game and it’s almost perfect. It allows...

Now let’s take a trip into the sci-fi future, where Terrans, Zerg, and Protoss species are fighting each other for dominance. This is the game we usually think of when talking about strategies – opposing factions start the battle in a different part of the map and soon the fight for resources begins. 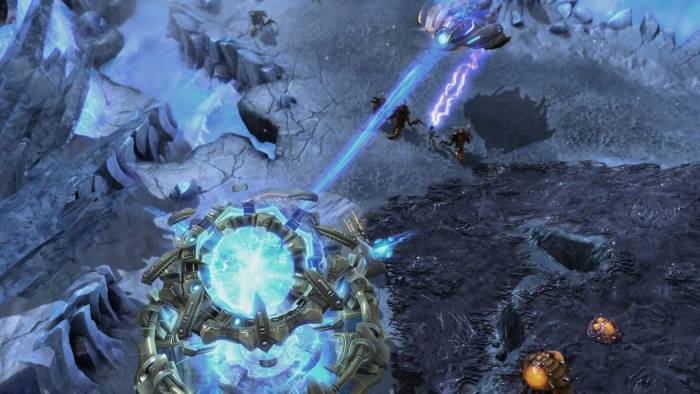 Your goal is to quickly develop your own base, recruit troops and swarm the enemy. Each of the playable factions is different and has its own unique units you need to utilize in order to achieve victory. This is what makes the game more interesting – part of the fun is learning how to play each faction effectively.

While we’re at the fantasy side of strategies it would be unwise to not to mention the Total War: WARHAMMER 2. That’s because large scale conflicts that include magical creatures, giant monsters and other beings from the Warhammer universe are not seen often in games. 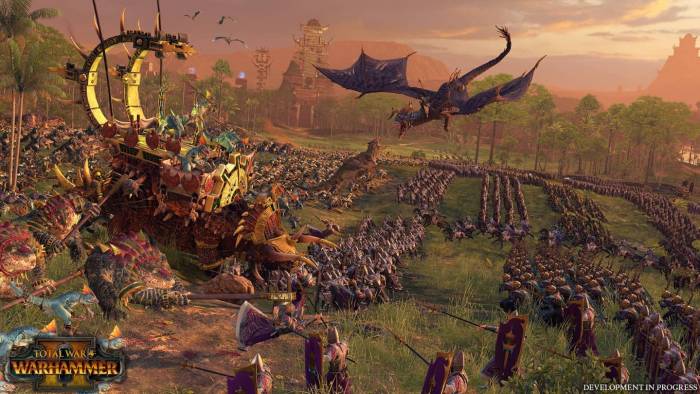 And by large we mean really large, like Total War large. Similarly to other games from the franchise, the game consists of two main parts. You will spend most of the time on the grand map in the turn-based mode, where you will be able to manage your empire, take care of diplomacy, recruit armies and declare attacks. And then the second part kicks in, as each declared attack can be resolved on the battlefield, where you will be able to control your few thousands-men army in a real-time battle.

If you are interested in a traditional RTS with base building and army recruiting but set during the Second World War period, then there’s hardly a better choice than Company of Heroes 2. The game allows you to play either Allies (the Soviet Union, US Forces, or British Forces) or Axis (Wehrmacht Ostheer or Oberkomando West).

Needless to say, each faction plays differently and allows to use different tactics in order to defeat the opponent. It’s worth mentioning the destructible environment and the fact that units can gain experience on the battlefield to increase their battle effectiveness. Also, the game still lives and you shouldn’t have trouble finding a quick online match.

This one allows you to follow the story from the first game. The core of the gameplay lies in the campaign mode, during which you will be able to develop your research complex and manage your squad of soldiers specialized in fighting the aliens. 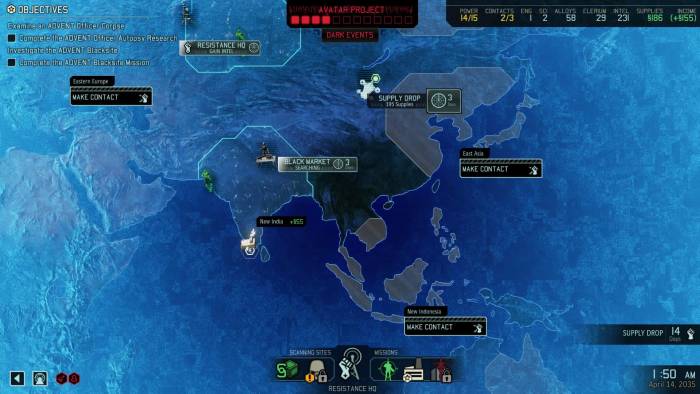 For each battle, you will be able to send up to six soldiers. During encounter you will issue orders in a turn-based manner – this includes moving the soldiers from one point to another, taking cover, throwing grenades or shooting at enemies. Successful battles reward your soldiers experience you can use to enhance their skills. Between battles, you will be able to extend your base and research new useful technologies and weapons to later use against invaders.

The king of old-school RTS games returned after almost 15 years in a new, refreshed, high definition version. It is the same amazing game it was back in 1999 but tweaked to fit the contemporary reality of bigger screens working at higher resolutions. 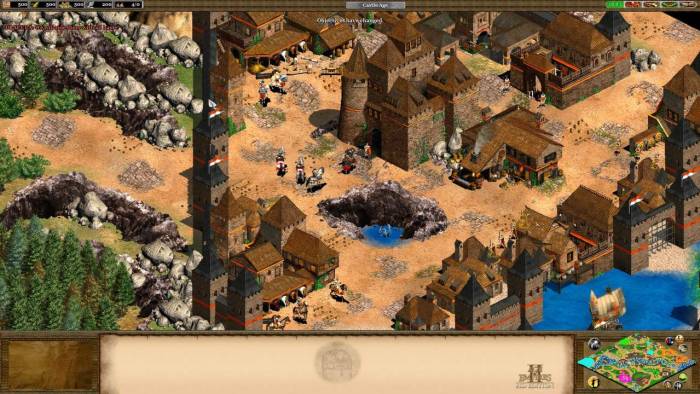 However, it would be simply a lie to say there’s nothing new besides the updated graphics. Age of Empires II: HD Edition supports Steam multiplayer, Steam Workshop for user-created content, and have 3 new expansion packs, including The Forgotten, which is based on a fan-made creation. Expansions add more content to the base game, but they also make important balance changes for existing units.

Strategies come in many different flavors. Depending on what you’re looking for, there are tons of exciting titles to choose from. We probably missed a few other great games, but it would be simply impossible to list them all in order to make everyone happy. If you’re a fan of large-scale battles, then any Total War game could easily make its way into your game library. For Second World War fans there’s Company of Heroes 2, and if battling is not your cup of tea, then there’s always a peaceful path in the form of Cities: Skylines to follow.