Assassin’s Creed Origins and Assassin’s Creed Odyssey were nothing short of a revolution for the series about an ongoing conflict between the Assassin Brotherhood and Templar Order. Not only did both games push the historical setting further into the past, but they also took the players by surprise with a complete gaming overhaul.

Instead of focusing on stealth and parry-based combat, the games moved into the realm of thoroughbred action-RPGs, filled with mechanics like leveling up the character, gaining new skills, and upgrading the character’s gear. The features merely touched upon in the last “traditional” Assassin’s Creed – Syndicate – became the forefront of this new, reinvented path for the series. But, following the series tradition, the features introduced in one installment were upgraded in the next. So the question that we will try to answer today is – which is better: an epic quest for vengeance in ancient Egypt or a mythological cruise on the Aegean Sea? You can find out about it in our full breakdown of both games, which will hopefully put an end to the “Assassin’s Creed Odyssey vs Origins” debate. 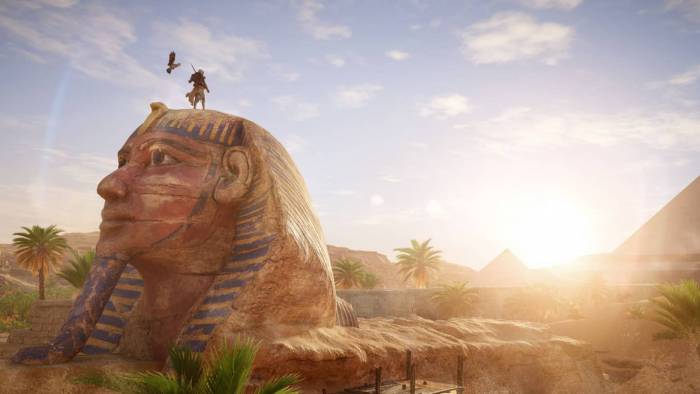 Assassin’s Creed games are known for their historical setting. The previous installments took the players to the Holy Land, Rennaisance Italy, Colonial America, the Caribbean Sea, and Victorian England. Each game gave the player a chance to learn various historical facts about the location at the peak of its glory, visit its most significant monuments, and meet the most important historical characters, like Leonardo Da Vinci, George Washington, or Queen Victoria.

AC Origins and Odyssey take the player on a trip to Ancient Egypt and Greece, respectively. In Origins, the player will travel down the river Nile, circa 48 B.C, and visit important locations like Alexandria, Memphis, and other locales. The game is set during the time of Roman occupation of the land, which means that various characters from the history of the great empire will appear throughout the story. The players will meet Cleopatra, Julius Caesar, and Brutus, among others.

In Odyssey, the plot throws the player even further into the past. The game is set four centuries before the events of AC Origins, during the Peloponnesian War. The player will visit various Greek city-states, such as Athens and Sparta, and meet their political and philosophical leaders. Some of the many historical figures the player will encounter on their quests will be Socrates, Aristotle, Herodotus, and many more.

On top of encountering real-life historical figures, both games allow the player to experience more mythological adventures in their respective settings. Throughout their quests, the protagonists will encounter creatures known only from the myths, including the Egyptian Gods and various monsters the enthusiasts of Greek mythology will recognize immediately.

Both games offer interesting historical settings, and choosing which one is your favorite depends heavily on which ancient land you find more interesting. We felt more at home in war-torn ancient Greece, so we give victory in this round to AC Odyssey. 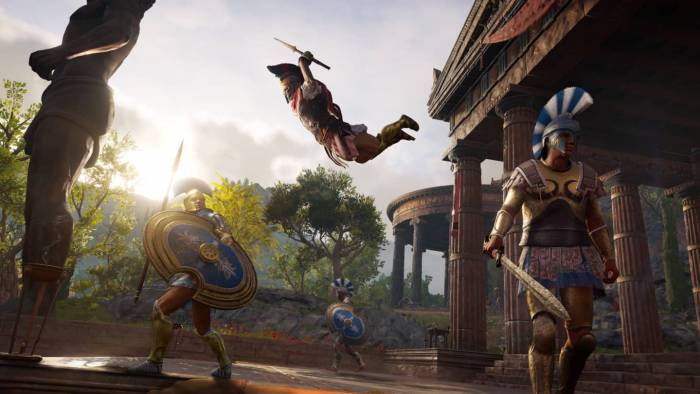 Each game in the Assasin’s Creed series tells a unique story of the conflict between the Assassin Brotherhood and the Templar Order, set against the backdrop of actual historical events. Origins and Odyssey are no different in this respect. In Assassin’s Creed Origins, the player controls Bayek, a Medjay warrior hunting down the men responsible for his son’s death. The trail leads him to Alexandria, where the ongoing power struggle between the Roman Empire and the Kingdom of Egypt is fueled by a mysterious group of people who aim to gain control over the ancient world.

Assassin’s Creed Odyssey follows a similar plot thread as its predecessor, with s few significant differences. The player controls either male or female Misthios, mercenary fighting for the highest bidder. Both playable characters are siblings, and the main story of the game focuses on their conflict. AC Odyssey features two more plotlines that intertwine with the main story – a hunt for the members of the Cult of Cosmos, a mysterious group trying to influence the result of the war from the shadows, and discovering the secrets of Atlantis, one of the Precursor kingdoms.

The plot of either AC Origins and Odyssey isn’t anything to write home about – they rehash the same “story of vengeance” beats from previous installments of the series. However, thanks to adding two additional storylines that unveil alongside the main plot, Odyssey gains another win in our versus. 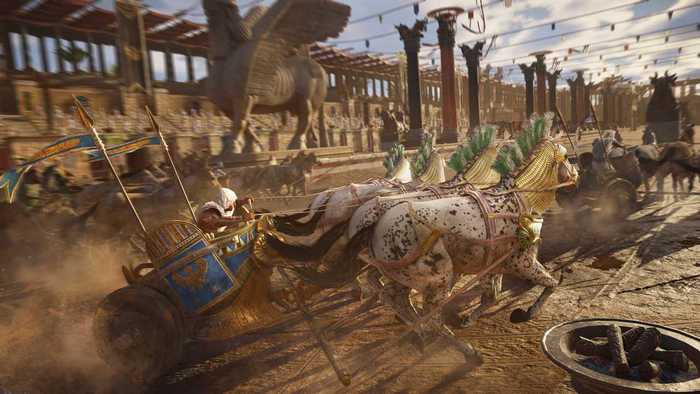 The gameplay overhauls of Assassin’s Creed Origins and Odyssey were probably the most controversial aspects of both games. Ubisoft Montreal took a huge leap of faith by straying so far from the road beaten by the previous installments (that the fans were growing exceedingly bored with it is another matter entirely). The many RPG elements of Assassin’s Creed Syndicate were a small aperitif before the full-course, action-RPG feast served in Origins and Odyssey.

The main changes could be divided into three categories: the exploration of the world, quest structure, and combat. The world of AC Origins and Odyssey has grown significantly in comparison to the previous installments. The Nile delta and the Aegean Sea, with its many islands and landmasses, easily overshadowed the largest Assassin’s Creed map to date – the West Indies. Both Origins and Odyssey improved upon the movement mechanics allowing the protagonist to climb nearly any surface, including steep hills and rock faces. Underwater gameplay has returned, as did naval exploration. The latter was greatly improved upon in AC Odyssey due to the island nature of the world of the game.

The missions structure of the previous games in the series was replaced by traditional RPG quests in AC Origins and Odyssey. The player could carry out main storyline quests as well as participate in side missions given to them by NPCs. This was even further expanded in Odyssey, with the three intertwining storylines, a multitude of sidequests, optional tasks, and daily challenges. Some quests in Odyssey even allowed the player to form romantic bonds with certain NPCs, offering plenty of male and female romantic interests.

Combat mechanics were one of the most divisive aspects of AC Origins and Odyssey. Like many other gameplay features, combat was completely overhauled to fit into the action-RPG genre. Gone were the counter-kills and one-hit assassinations that made the game so popular. In AC Origins and Odyssey, the combat was more hitbox-oriented, with the player unleashing combos of light and heavy attacks, chipping away bits of the enemy’s health bar. Each opponent had a specific level ascribed to them – taking on foes with level significantly higher than the players spelled almost instant death for the character. Another new combat-related mechanic were the skill trees. In Origins and Odyssey, the player could develop three, upgrading the protagonist’s melee, ranged, and assassin’s abilities. Unlocking new skills allowed the player to learn special attacks, which became available by filling an adrenaline bar. Unleashing them at the right moment could turn the tide of a fight, especially during boss battles.

The radical gameplay overhaul shocked the players, but the initial apprehension was quickly assuaged by how competent the new features were. Especially in Assassin’s Creed Odyssey, in case of which the developers had heard the fans’ pleas and balanced the gameplay to be more player-friendly. Combined with the absolutely massive world map, filled to the brim with quests and content, it makes AC Odyssey an obvious winner of the gameplay portion of our breakdown. 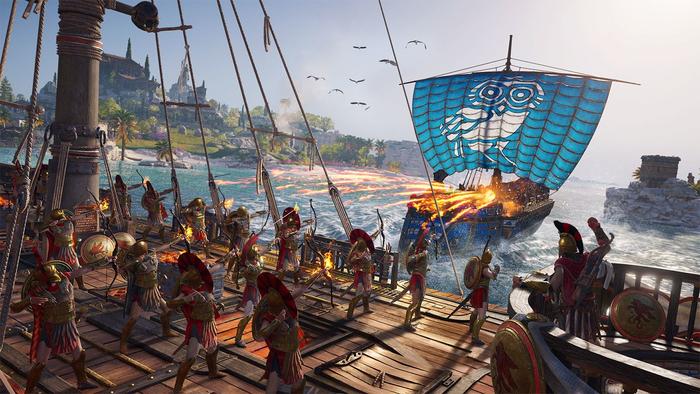 The graphics of both games were absolutely breathtaking. The developers did their best to recreate the various locations of ancient Egypt and Greece, including the stunning landscapes, bustling villages and cities, wonders of nature and human work, etc. What, in our opinion, had suffered a little were the cutscenes. Most of them followed the RPG pattern of two characters talking, walking, talking and walking, and a little more. It’s hard to say that the cutscenes of previous AC games were marvels of direction, but here they felt even more static than usual. With that in mind and seeing how the graphics had little time to developed between the release of Origins and Odyssey, we decided to call it a draw in terms of the visuals of the two games.

It would seem that the winner of our Origins vs Odyssey showdown is the latter. It has every right to be – it greatly improved upon the overhauled gameplay of its predecessor, offered one of the largest maps in the series history, introduced an intriguing setting and characters, and more. But Origins also deserves praise for daring to take the series in a completely new direction and managing not to alienate dedicated fans. If you are still wondering “which one should I play,” we suggest you play both of them. Each of the games has its pluses and minuses, and while Odyssey offers significantly more content, Origins set a brand new standard for the series.