The Battlefield series’ importance to the multiplayer first-person shooter genre is hard to dismiss. EA’s video games have always been placed high on the list of the best online shooters, thanks to their complex mechanics, many engaging modes, and exciting settings. From the fronts of World War II to the distant future, the players could engage online opponents both with style and substance.

Recently, the Battlefield series has undergone a renaissance of sorts, with its newer installments – Battlefield 1 and Battlefield V (although gamers can now experience some futuristic warfare with Battlefield 2042) . After several titles in the series have tried to shift the focus towards the single-player campaign, these two games were a welcome return to the multiplayer roots. They offered engaging gameplay with excellent new modes, stunning, state-of-the-art graphics, and distinct settings on the fronts of both World Wars. Both games were very well received by fans of the series and critics alike.

Seeing how both BF 1 and BF V are excellent representatives of the multiplayer FPS genre, it might be hard for a casual player to choose one over the other. This article will break down the gameplay, the story, and everything between both games to see which one of them is superior.

Choose your preferred field for battle

Both Battlefield 1 and Battlefield V are quintessential first-person shooter games emphasizing multiplayer gameplay. The players are thrown into the heat of battle, participating in several unique modes. Both games feature similar combat mechanics, with a variety of period-accurate weapons available to the player. While BF V features guns the players might be familiar with from other WWII-themed games, BF 1 gives the player access to many prototypes that were only starting to be utilized on the battlefields. To keep up the intensity of a multiplayer shooter game, the players of BF 1 will get to use prototype machine guns, self-loading rifles, light mounted MGs, and more. As per the Battlefield series tradition, the players will also be able to drive various vehicles, from biplanes and early model tanks in BF1 to the most recognizable vehicles of World War II. 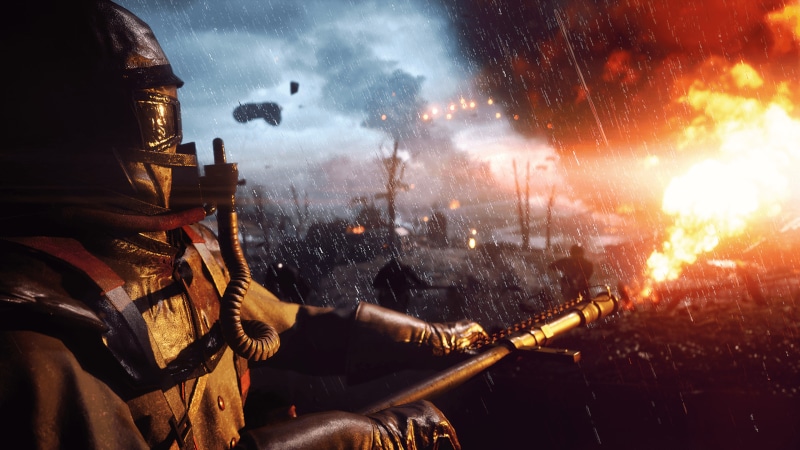 In terms of engaging gameplay, Battlefield 1 takes the first prize. While it’s still more of the same FPS mechanics the players have grown used to, setting them within the realm of the Great War makes all the difference.

The Battlefield series is known for setting the action during various periods and featuring different conflicts. Throughout the years, the players could visit the trenches of the Second World War, try their hand at contemporary urban warfare, and visit distant future filled with advanced weapons and vehicles. The last but one installments of the BF return to the roots of the series planted in the “classic” 20th-century conflicts.

Battlefield 1 stands out in this aspect, giving the player a chance to fight on the fronts of the Great War. Anyone familiar with the events of WWI and its style of warfare might’ve scratched their heads as to how an intense multiplayer shooter is going to mesh with the historical accuracy of trench warfare. Somehow, the developers managed to do that, delivering one of the most intense skirmishes in the series history. 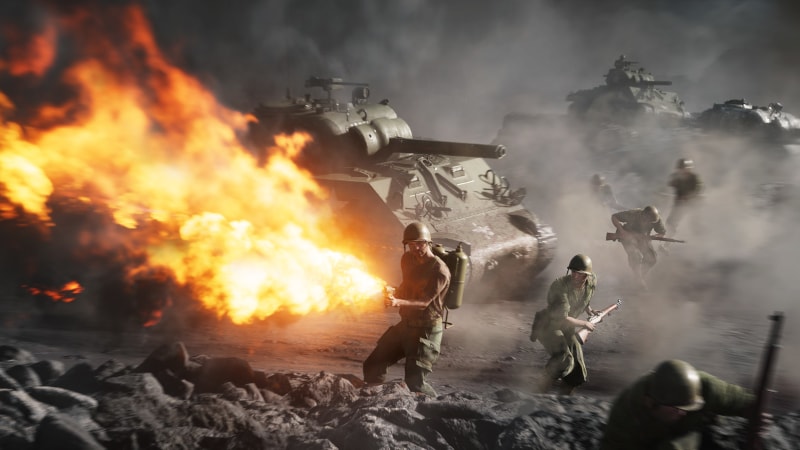 Battlefield V presents the familiar setting of WWII. However, this time the developers decided to reach for less familiar battlefields of the conflict, placing the action of the game in occupied Norway, Northern Africa, and Normandy, among others. Despite the familiarity of some of these locations, BF V offers a different take on each of them, giving the players a sense of freshness.

Thanks to its fresh World War I setting, Battlefield 1 is the clear winner here.

Let’s face it, the fans of the Battlefield series did not spend sixty dollars to follow a mediocre story of yet another brave soldier single-handedly resolving some major conflict. They’re here for the intensity of the multiplayer battles, which Battlefield 1 and V deliver. 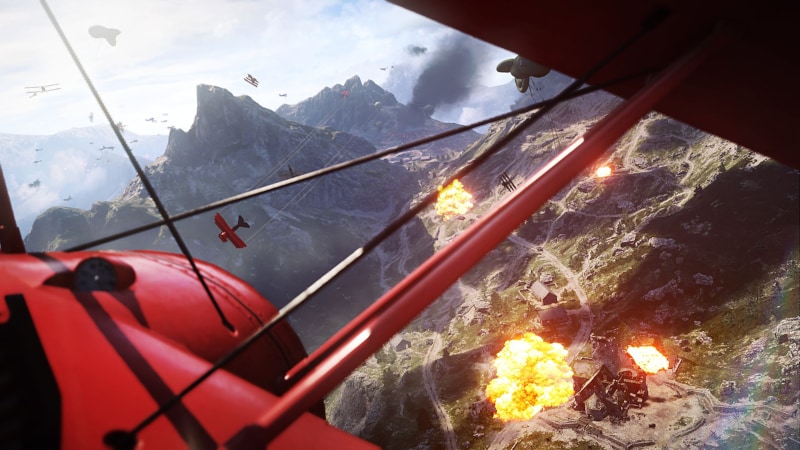 Due to the multiplayer focus of both games, their single-player games are nothing to write home about. The War Stories, as they are called in the games, are divided into scenarios set within the timeframe of the Great War and WWII. Some of them offer some interesting twists, such as BF 1’s “Friends in High Places”, which plays on the tall tales told by the veterans, and “The Last Tiger”, in which the player follows the Wehrmacht tank crew, seeing the war from a completely different perspective. Both campaigns feature a diverse cast of characters, including female fighters and soldiers representing different countries and ethnicities,  emphasizing that white American and British men weren’t the only ones who fought on the fronts.

Despite all that, the campaign modes in BF 1 and BF V aren’t terribly long and lack any significant substance. Thanks to the new setting and interesting story twists, Battlefield 1 wins in this category, but only because it offers something else than another WWII story.

The meat of every game in the Battlefield series, the multiplayer modes in BF 1 and V deliver on all the important aspects. Both titles offer intense online FPS gameplay divided between several interesting modes. Some of them appear in both games, like “Operations” and “Grand Operations” mode, in which the players compete against each other, completing objectives on a sequence of maps resembling a campaign. Others are variations of the classic deathmatch and team deathmatch modes. However, Battlefield V introduces the “Firestorm” mode, in which the players fight each other on different maps surrounded by a ring of fire. “Firestorm” mode is an interesting take on the popular battle royale modes in other FPS games. 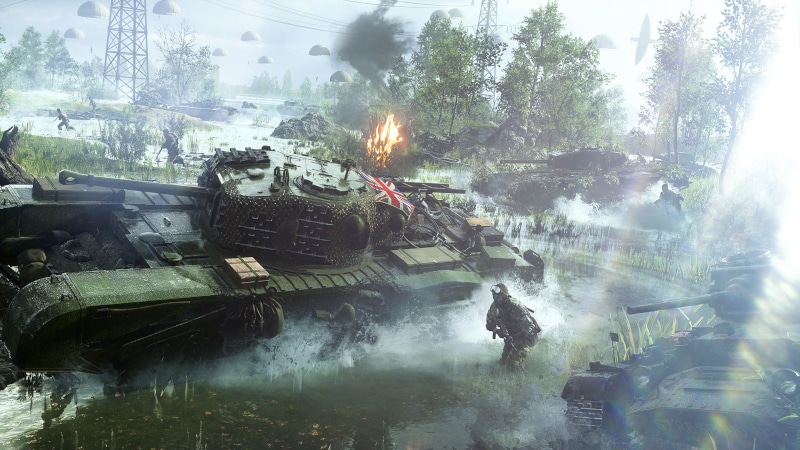 Thanks to the interesting Firestorm mode, Battlefield V snags its first victory in our versus.

We could write paragraphs upon paragraphs discussing all the big and small details of Battlefield 1 and its sequel. However, it is time to put the baby in the crib and decide who winner our BF1 vs BF5 confrontation is. According to the fans, both titles offer unique gameplay experiences and are one of the best representatives of the multiplayer FPS genres. Through our breakdown, Battlefield 1 emerges from the dust victorious.

Thanks to its unusual setting that still fits the intense Battlefield series gameplay features, Battlefield 1 is a breath of much-needed fresh air for the series.  If you’re a fan of the multiplayer FPS genre, you can rest assured that BF1 is a game that will meet all your needs. G2A Marketplace offers both games at the price of one elsewhere. Check out our marketplace for the best prices for Battlefield 1 and Battlefield V.