You may not like sports, but there’s something special about the arcade take on the most popular disciplines. We’ve prepared a list of the best games of such sort that used to be super popular back in the day.

This list includes quite a variety of retro games, ranging from fantasy takes on real-life disciplines to some pretty far out stuff. Either way, you should love these picks, especially if you’re a fan of classic gaming.

Let’s start with some arcade classics from Sega Genesis. The Mutant League series features three games that are fantasy takes on American football and ice hockey.

The rules are pretty much the same, but the teams consist of aliens, undead and other kinds of monsters. Likewise, fields and rinks are littered with hazards. Sounds fun, doesn’t it? 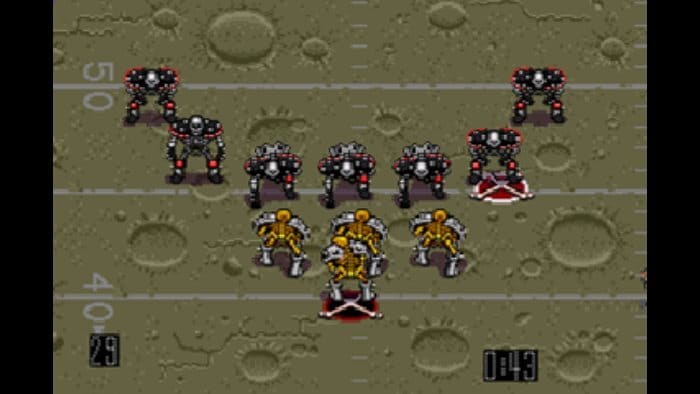 Mutant League Football, the first release in the series, published in 1993, is – as the title suggests – America’s most popular sport played by aliens, skeletons, robots, trolls, and superhumans on post-apocalyptic fields full of additional threats, such as landmines, fire pits and the like. The teams have special abilities, too, all nasty and unpleasant. After all, you got to win no matter what it takes to succeed!

The second game in the series, Mutant League Hockey, is pretty much the same thing, but it’s ice hockey. Expect lots of gruesome deaths, brutal fights and general craziness on the rink. Weird stuff aside, this game still does a pretty good job replicating the rules of the real-world discipline.

A spiritual successor to these titles, made by the original designer, was released in 2017. Mutant Football League is a modernized version of the first game and its take on American football. Again, expect weird teams, lots of obstacles on the field and plenty of dirty tricks. There’s also a sequel in the works, planned for a 2023 release.

If you want more stuff like that, you can check out the Blood Bowl games. Yes, that’s right, Warhammer fans have their own sports game!

Another classic from the very early 1990s, Super Baseball 2020 is a futuristic take on baseball, one of America’s most favorite pastimes.

This means you can expect robot players here in addition to human ones, as well as other additions taken straight from the realm of science fiction, like computer sensors and jet-packs. 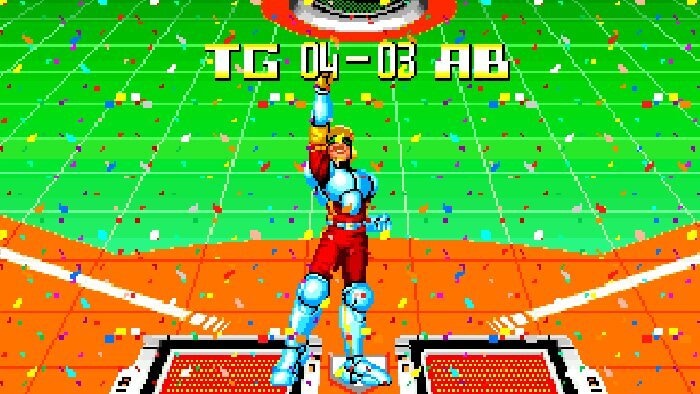 Super Baseball 2020 features only one stadium: Cyber Egg Stadium. There are various changes in relation to the real-world game due to the fact that the whole thing is futuristic and the hitters are much more powerful, so certain limitations were needed here.

One of the most important aspects of the gameplay is that you earn money during the match. You can later use these funds to power-up your players and unlock new upgrades. Money doesn’t get carried over to the next match, so there’s no point in saving it for future matches. You got to spend it wisely in order to gain an upper hand over your opponent.

While the title suggests a shooter or an action game of some kind, it’s actually a basketball one.

A sequel to an arcade hit from 1993, this one is a far superior release, offering lots of fun. 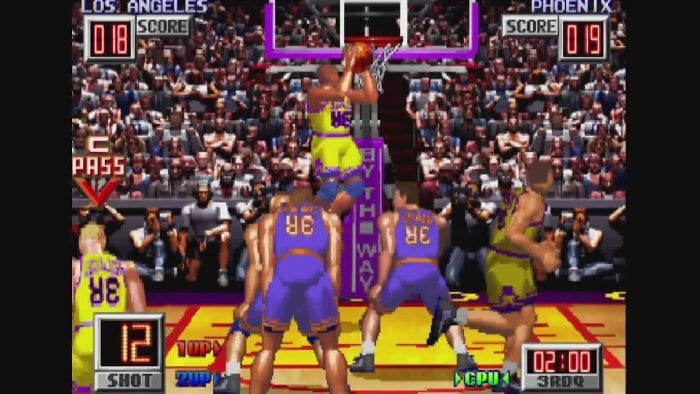 While arcade games seem to be rather simplistic in their gameplay, they can still offer lots of possibilities and options. Run and Gun 2 introduces several new moves that you can employ in your favor. Spins, alley oops, block outs and so on – there’s more depth and complexity to this one.

All in all, Run and Gun 2 was a well-made arcade game that sported some impressive audiovisuals and offers fun gameplay. What’s not to love about this one? The fact that it was a multiplayer title only increased the enjoyment.

ACME All-Stars lets you build your own dream team of Tiny Toons. There are many iconic characters available here. You can recruit Buster and Babs, Plucky Duck, Monty, Elmyra Duff, Fifi La Fume, Calamity Coyote, Dizzy Devil and many more in order to win each of the five games that you can choose here. 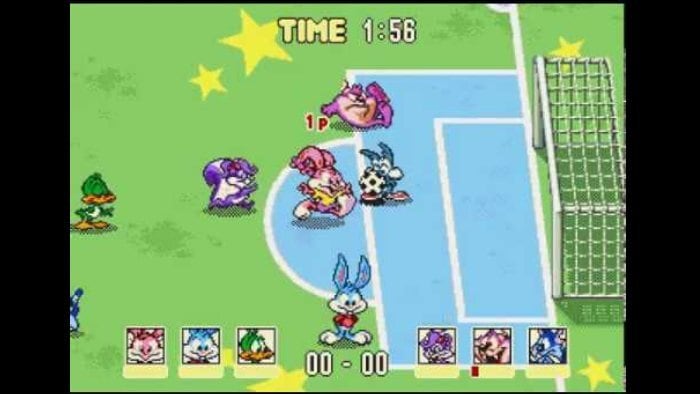 There’s basketball, there’s soccer, there’s bowling, there’s even an obstacle course and a Tiny Toon take on whack-a-mole called “Montana Hitting.” It’s just a fun take on these disciplines, not too complex, but still very enjoyable. If you want more stuff in the same vein, there’s Tiny Toon Adventures: Wacky Sports Challenge, also made by Konami.

A Midway’s classic, Arch Rivals pits two basketball duos against each other. The goal? Outscore your opponents, of course! What’s interesting about this is that you can freely use violence to achieve victory!

That’s right: while the game seems a bit more realistic than the Mutant League games, what it shares with them is aggression and a basketball court littered with obstacles, such as soda cans. Avoid them at all costs! The matches consist of four quarters that last four minutes each. 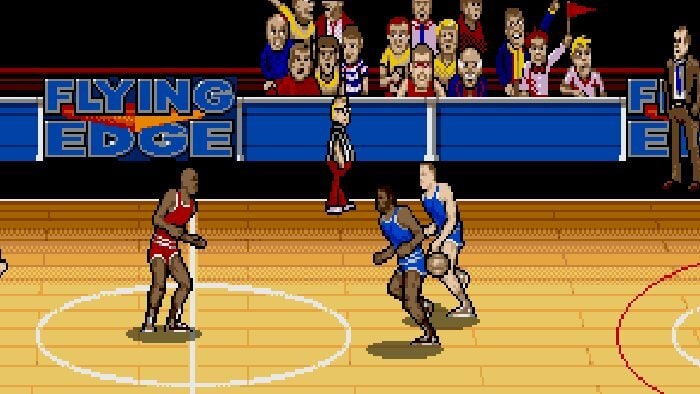 The game features several fictional teams and players to choose from, including a character named Tyrone. One interesting thing about Arch Rivals is that arcade operators were able to change the names of teams to real-life ones (or any other names, for that matter). All things considered, it’s a great game that you can get in Midway’s Arcade compilations (Midway Arcade Treasures 2, Midway Arcade Treasures Deluxe Edition, and Midway Arcade Origins).

Here’s a simulation from the Super NES (although there are some twists to it). If you’re looking for a traditionally-inclined oldie, this one is a great pick. 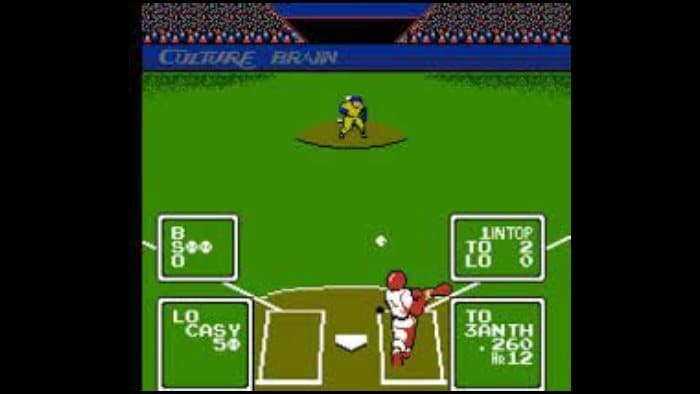 A sequel to Baseball Simulator 1.000, Super Baseball Simulator 1.000 lets you choose one of the three available leagues: Atlantic, Nothern and Ultra, each featuring six teams. What’s interesting about the last league is that pitchers and batters can boost their abilities using various power-ups, which kind of makes this game feel closer to Mutant League or Arch Rivals.

The game gives you an opportunity to create new teams and players. And if you’re looking forward to playing it today, you’ll be pleased to know that was added to the classic games section of Nintendo Switch Online.

Got any fans of boxing here? Punch-Out!!, one of the greatest games of all time, lets you play as an underdog rising in the ranks of the World Video Boxing Association. Will you become the new champion? 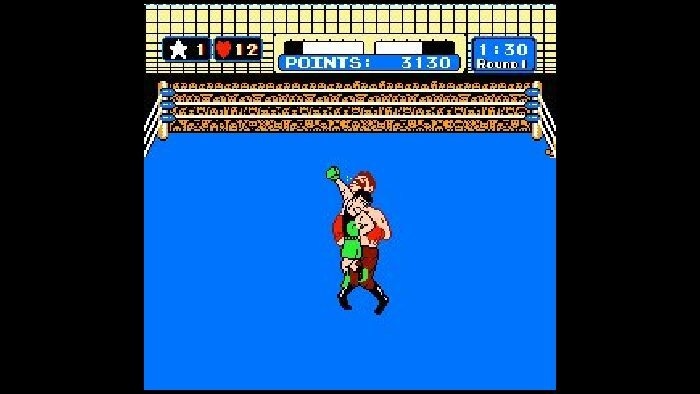 Punch-Out!! puts you in the shoes of Little Mac, an aspiring boxer who wants to become the World Champion. To do so, he needs to beat fourteen different opponents, with the final battle between him and Mr. Dream (in Mike Tyson’s Punch-Out!! the final boss was Iron Mike himself).

As far as the gameplay is concerned, it’s rather simple. You can throw various punches to gain stars. Once you do that, you can perform a powerful uppercut. You can’t let your health bar drop to zero. To do that, you need to block enemy punches or avoid them. It’s a wonderfully fun game that is considered one of the best titles available on the NES.

The title says it all. You’re a ninja golfer. What a game! 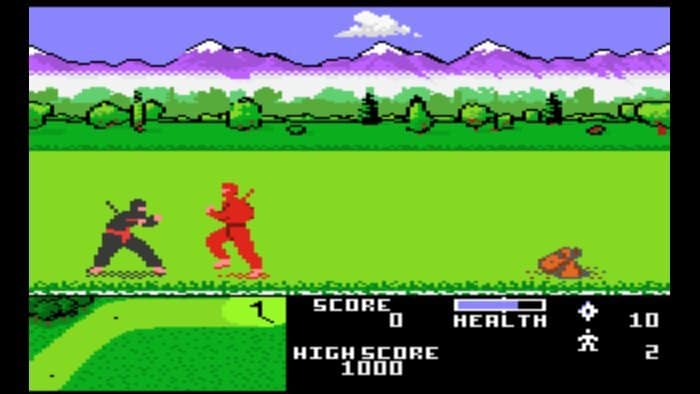 Your first task is of course to aim the ball and then shoot it towards the green. Then, you have to run towards the ball. This is where the fun begins: you’ll encounter tons of various enemies along the way, including ninjas, sharks, gophers, birds and the like.

All in all, it’s a weird, whimsical game that you might want to try out if you’re classically inclined. Don’t expect too much aside from a fun session of Ninja Golf.

Arch Rivals was great, but its spiritual successor is even better. If you wanted basketball to be more brutal and intense, NBA Jam is basically a dream come true! 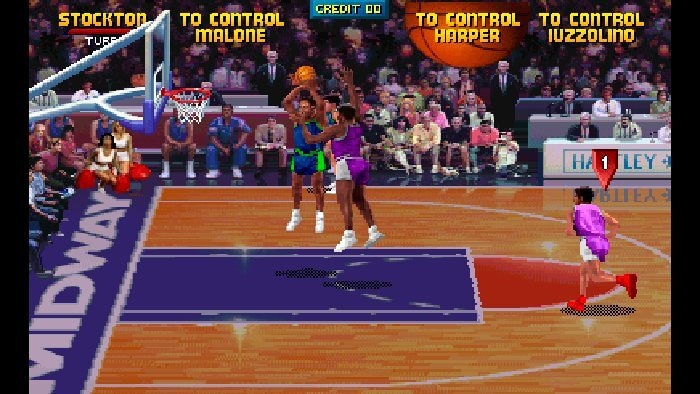 What’s great about this game is that it features licensed teams and players, along with the digitized versions of the latter. You can even unlock some hidden players and discover plenty of Easter Eggs and special features, including floors so slippery that your players might fall if they run way too fast. Heck, the arcade machine version even featured a hidden tank game!

As far as gameplay is concerned, it’s similar to Arch Rivals. There are two teams of two players and your goal is to outscore the other team. No holds barred! You can use all sorts of dirty tricks to defeat your opponents.

So, if you’re looking for something more realistic-looking, but just as whimsical as Mutant League, this one’s the right pick for you. 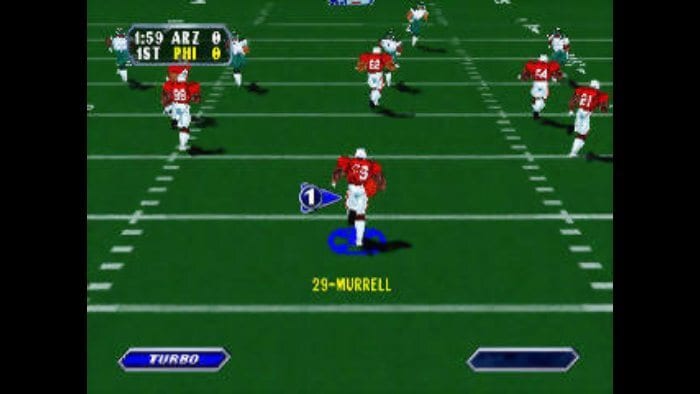 Two teams of seven players. No penalties and no hold-barred, just like in NBA Jam and Arch Rivals. Brutal attacks on other players are both permitted and encouraged. NFL Blitz is pretty crazy!

Just like NBA Jam, the game features licensed players and teams (from the 1997 season). It’s a fun title with tons of action and simplified rules, which helps everybody enjoy it without any real knowledge of the sport.

And this concludes our list of the best arcade sport games available on arcades and oldie consoles. As you can see, the most popular disciplines – football, basketball, ice hockey, golf – are well-represented here.

If you are a fan of classic games and the most popular American pastimes, you’ll enjoy these, especially now that some of these have been re-released on modern consoles, while others have received new sequels and spiritual successors.