Having started in 2004, Far Cry is slowly, but inadvertently getting close to being 20 years old. Although there have been “only” five main series entries, technically, it also produced a number of spin-offs with creative premises. Let’s take a look what the Far Cry games are all about.

Far Cry began life as a beautiful (at the time) and engaging first-person shooter developer by Crytek, a studio which would later boil PCs with Crysis, and its most recent production is Hunt: Showdown. The game was published by Ubisoft, and between the first and the second instalment Ubisoft claimed full control over the license, taking it in a direction that we now associate with it. Let’s take a look at each game, then, shall we?

At the time of release Far Cry was a stunningly beautiful game, testament to Crytek’s propensity for making the most of the current gen PC components in a worthwhile manner.

The tropical island looked amazing, and felt just right. The jungle also allowed for a degree of freedom not provided by the obviously more limiting indoor areas, giving more choice in how to deal with your enemies. 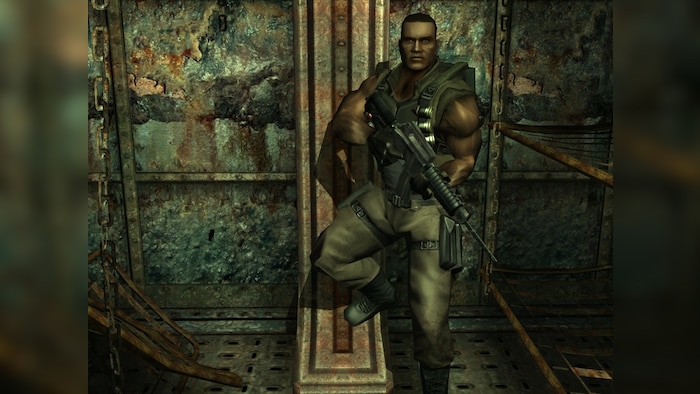 The story was a delightful bunch of action movie concepts, and includes the protagonist’s dark past that gave him skills needed for survival, secret lairs of over-enthusiastic scientists, and intelligence agencies meddling in what’s going on. It’s quite an entertaining mix, and it worked really well with the first-person shooter gameplay. A solid foundation for the series.

The original Far Cry hadn’t technically been released on consoles until 2014, but in 2005 Xbox players got Far Cry Instincts.

It’s a game that’s essentially Far Cry, but features several changes, like tweaks to the story for example, or having a direct sequel, released as Far Cry Instincts: Evolution, just a perfect title. It’s the only time the main character was kept between two Far Cry entries. 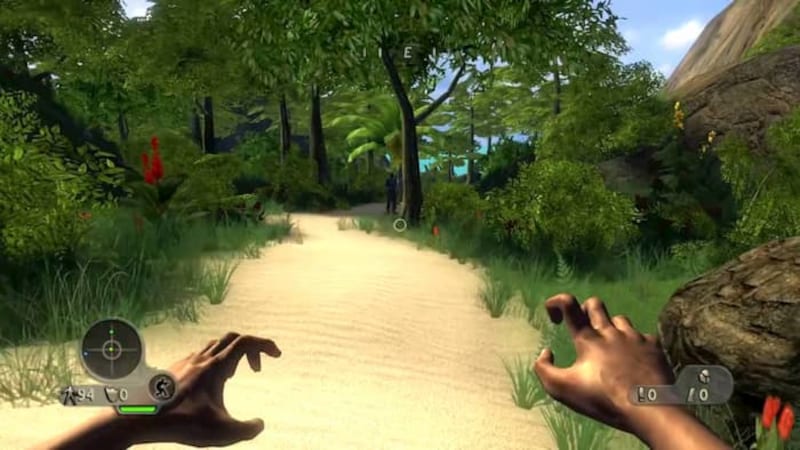 Around the time Evolution was launched, Xbox 360 received Far Cry Instincts: Predator, another perfect title for a game. Predator was basically a compilation of Instincts and Evolution, with a few graphical improvements. A nice new feature it brought in was a map editor allowing the players to make a little more content for themselves in multiplayer.

An unusual release for Nintendo’s Wii console, Far Cry Vengeance is a version of Far Cry Instincts: Evolution with its gameplay adapted for Wii’s motion controls, specifically the Nunchuk.

Many actions in the game can be performed by moving your controller in different ways. There is also a new storyline, diverging somewhat from that of the PC or Xbox versions. 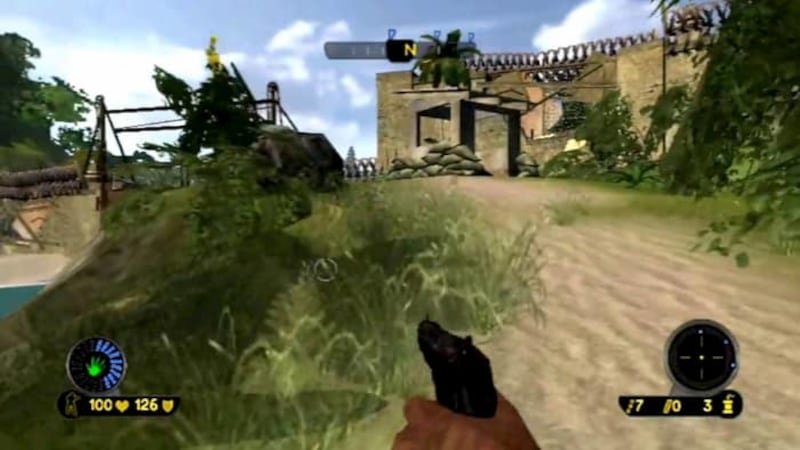 Although Far Cry Revenge doesn’t have the map maker mode of the Xbox release, nor does it have online multiplayer, it compensates for it by including three new maps, and a few new weapons to use in the split screen multiplayer. If you always felt that shooters aren’t immersive and physically taxing enough, and you have a Wii, you might want to give it a shot, but it’s no VR, for sure.

The first Ubisoft-developed Far Cry game in the main series, FC2 turned out to be a very interesting game.

You have to keep an eye out on how your battle with malaria is going, for example, and occasional taking a flamethrower to the bushes of Central-African locales. It was also the first in the series to introduce a fully open world which catered to various different playstyles. 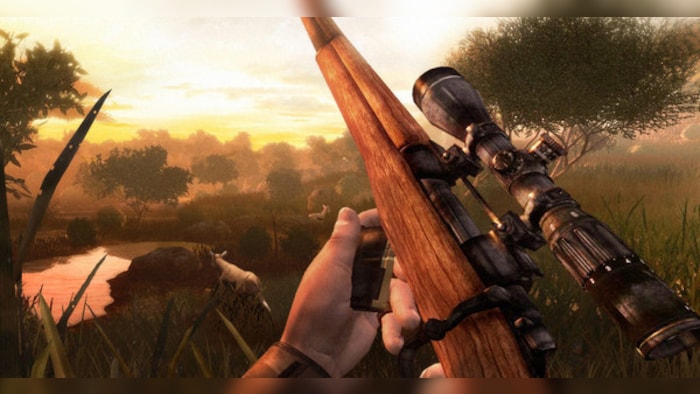 Far Cry 2 aimed for some realism, with aforementioned malaria which will take you out if you don’t take your pills, weapon degradation, or a lack of interactive map in favour of a more realistic one. And there’s, of course, no shortage of the by-now-iconic Far Cry intense destruction by any means available, even if the game is more serious about than its sequels are.

In Far Cry 3 the series hit its stride and established the expected FC playstyle for good.

In this one you play as a young man who decided to go on vacation with his friends and brother, but didn’t properly research the destination, so they end up on a pirate-controlled island with an entertainingly intense leader. There’s also a weird supernatural-y side of the story that goes to weird places. 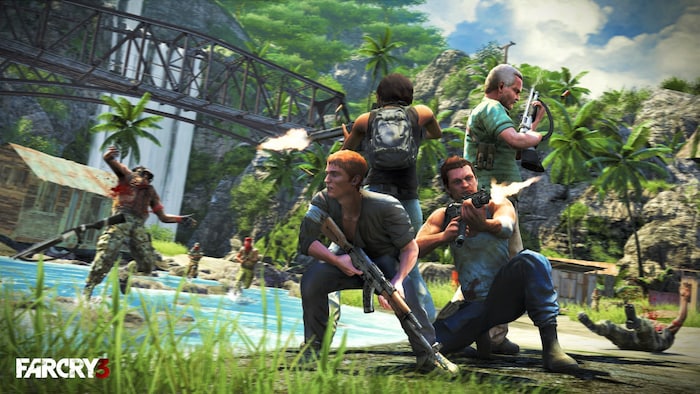 You’ll be roaming the island either on assignments or of your own volition, killing virtually anything that has enough brains and muscle mass to be able to move around. Your prime targets will be Vaas’ goons occupying key locations, but you’ll also throw the ecosystem out of whack by killing animals for resources. And years later, it can still be quite fun.

For every numbered Ubisoft-developed Far Cry (other than FC2) there’s also a non-numbered entry, which tries to do something quirky.

For Far Cry 3 it was Blood Dragon, and if you grew up watching 80s action movies, you’re probably going to enjoy playing it, because it’s Kung Fury by way of Far Cry. It’s dumb, it’s cheesy, and it has lasers. 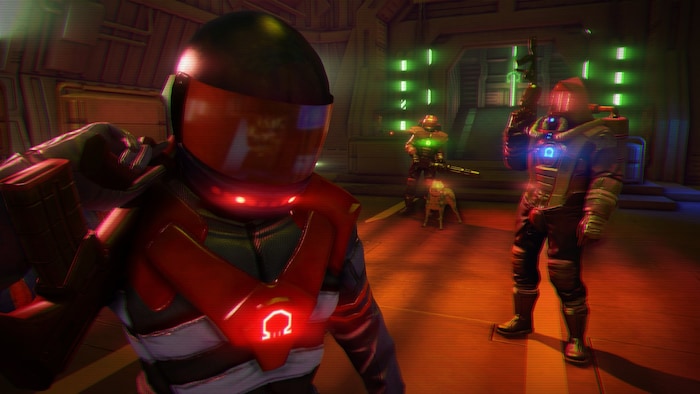 In Blood Dragon you play as Sergeant Rex “Power” Colt in a post-nuclear dystopian future of year 2007, and it only gets more 80s direct-to-video from there. It’s still the open world FPS that Far Cry 3 is, but it has giant genetically and cybernetically enhanced reptiles, excessive amount of one-liners, and furiously colourful lasers. It’s as silly as old “SF” action movies could get, and then some.

FC4 offered a complete change of the scenery and took the series from warm environments to a fictional country set in the Himalayas, called Kyrat.

The main character arrived there to lay down his mother’s ashes in her homeland, but his journey is interrupted by events connected to the civil war going on, and a warlord, Pagan Min takes a lot of interest in your character. 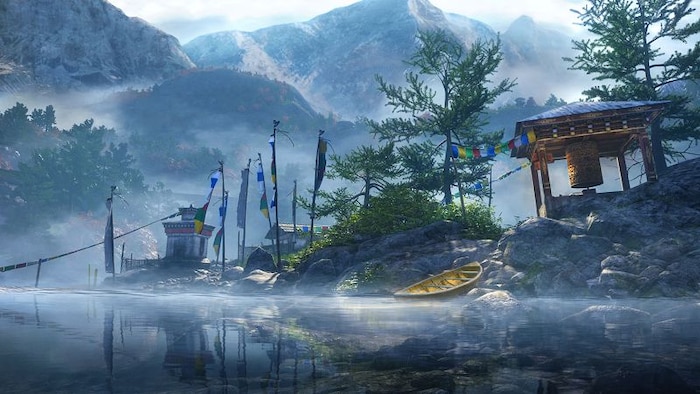 Change of the scenery aside, FC4 plays much like the previous entry. You have a pretty much free reign of the open world, and the game supports both stealth and gung-ho playstyles. There’s also player progression along offensive and defensive skill trees, styled after a tiger and an elephant. You also get to choose who to support, affecting the ending you get.

Where Far Cry 3 had Blood Dragon, Far Cry 4 had Primal.

Ubisoft went way back in time, and planted the game firmly in the prehistoric times, when humans were still hunters-gatherers hunting with flint spears. It uses the map of Far Cry 4 as the base, but transforms it so that it reflects a more, well, primal state before humans started forming civilizations. It’s quite interesting. 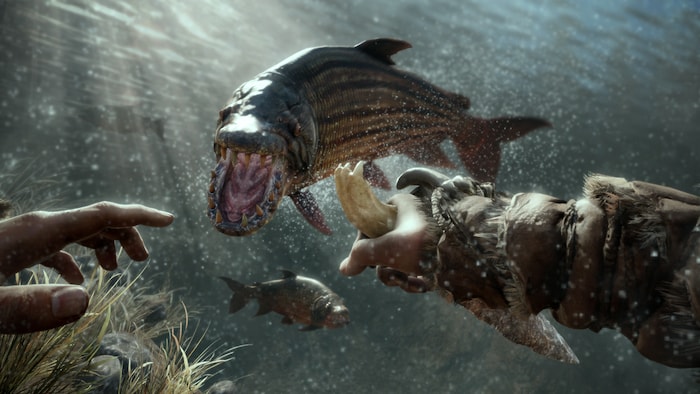 Probably the coolest feature of FC Primal is your character’s ability to tame wild animals, which assist him along the way. Your owl can share its sight with you for scouting ahead, a sabretooth tiger can savage your enemies etc. You also have to make do with primitive, but proven effective, weapons like spears or slings, and vehicles being replaced by large beasts you can mount.

Far Cry 5 is the first game in the series, which takes place deep into the continental United States, in Montana. Specifically, a fictional Hope County.

Your task from the very beginning is bringing to justice a man called Joseph Seed, who established a violent, armed doomsday cult in the county. Of course, something goes wrong at the beginning, which gives you a license to wreak havoc. 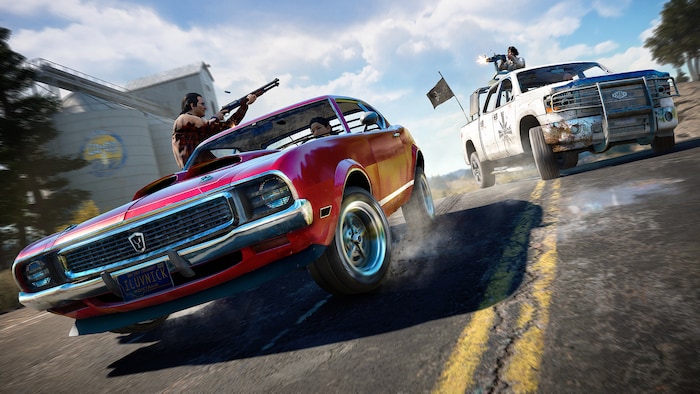 FC5 features a cast of diverse companions who can provide you with all kinds of backup, from sniping to air support, or a literal bear. The Hope county is beautiful and vast, giving the player a lot of space to explore and to find trouble. There are, once again, three endings, including one secret, and one that actually ties into a subsequent Far Cry game.

Far Cry New Dawn is the first instance of a narrative sequel ever since Evolution.

The game is set seventeen years after the end of Far Cry 5, in the same Hope county, but changed by a nuclear apocalypse. The player plays the role of Captain (a customizable character much like the Deputy in FC5), someone who helps nascent communities regrow after the devastation. 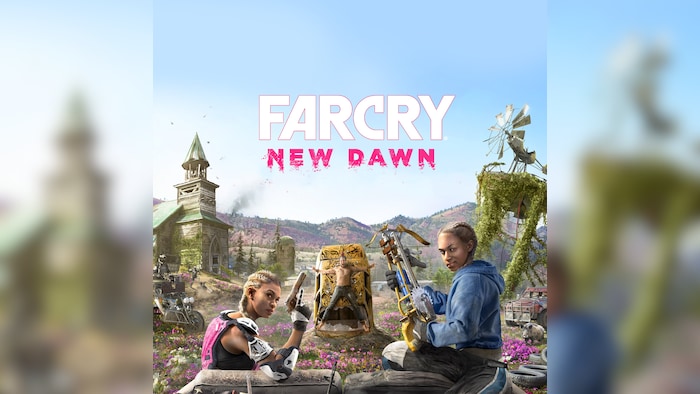 New antagonists are the Highwaymen, an association of bandit groups, the one you will tangle with are twins Mickey and Lou. You’ll also encounter several characters from the previous game, too, so it pays off to play FC5 before to get this one. By gameplay, it’s as Far Cry as a Far Cry game can possibly be, just with some new weapons and craftable vehicles.

This concludes our list of all Far Cry games by order releases to date, with the caveat that plenty more are certainly skulking around in the near future. Hopefully, this list helped you pick the one that piqued your interest.