Pirates are probably one of the most romanticized criminal groups, second only to Wild West outlaws.

These ruthless looters and murderers have taken over the imaginations of the masses thanks to books, movies, and also video games. In this article, we’re going to take a look at some of them – surprisingly representing a wide range of genres.

Sea of Thieves – Rare’s multiplayer adventure game – takes the player to the high seas, where they can try their hand at being crewmembers of a ship. The game allows the players to carry out various missions for one of three in-game factions. The players within one crew can work with another ship to carry said missions, gaining additional rewards for completing them together. 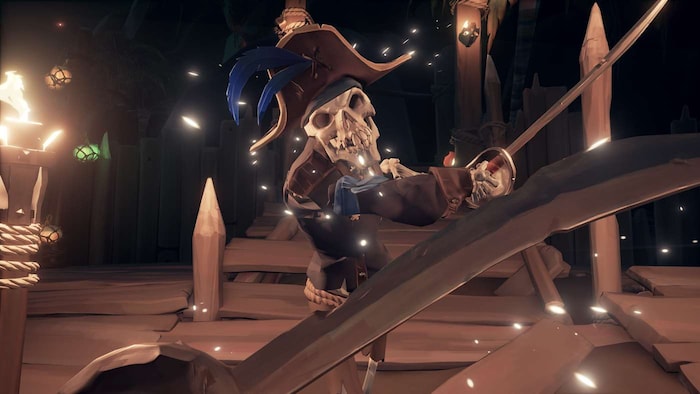 What is undoubtedly the best quality of SoT is its multiplayer aspect. The players have to learn to cooperate in working different parts of the ship. The number of players on board depends on the type of the ship: small vessels can board two players, while large galleons carry up to 4 souls. Carrying out different tasks onboard by respective crew members will be key to successful voyages, so each player should perform their duties diligently or risk walking the plank.

Assassin’s Creed III introduced the players to naval gameplay. In certain parts of the game, Connor Kenway could stand behind the steering wheel of his ship and engage the enemy in sea battles. Black Flag, the fourth installment of the series, expands upon these mechanics to a great effect, making seafaring an essential part of the gameplay experience. 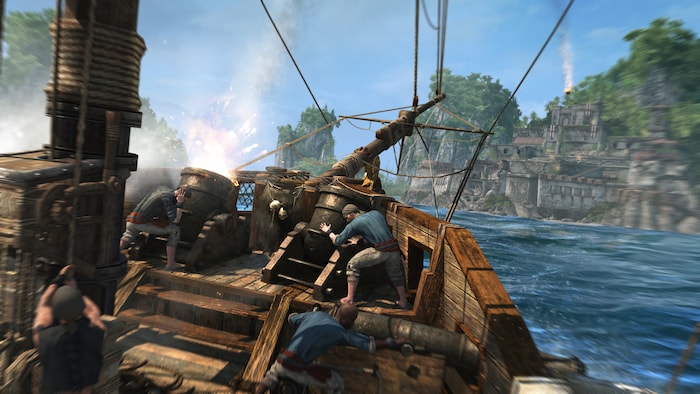 ACIV: Black Flag combines the usual assassin shenanigans with expanded seafaring options. According to the developers, the player spends 2/3 of the game time at sea, sailing to their destinations or partaking in other piratey activities, including plundering galleons, searching for buried treasures, or exploring sunken wrecks.

The game introduces a notoriety system – the more mayhem Edward causes at sea, the more bounty hunters will come after him. Nothing spells “pirate game” like evading or taking on an entire armada of enemy ships.

Conceptually, Blackwake is a game very similar to Sea of Thieves. The players control the crewmembers of s ship, operating different stations and sailing across the seas. But while SoT focused more on long-distance sailing, with various adventures happening along the way, Blackwake throws the players into the heat of battle. 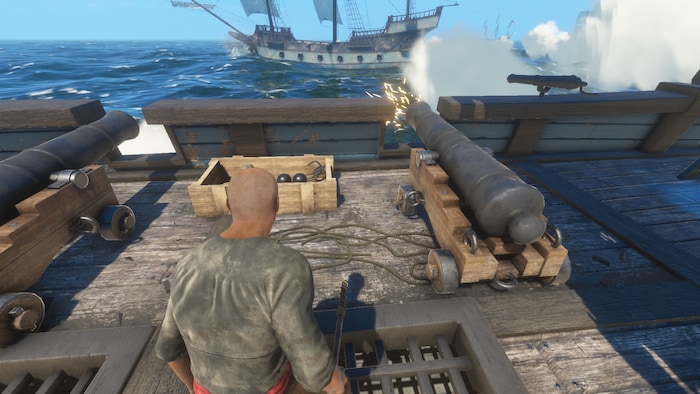 Focusing solely on battle gives Blackwake an additional dose of intensity. The game requires the players to constantly be on their toes, firing coordinated volleys and fixing damage made by enemy fire. The intensity of naval battles, combined with the necessity of cooperation between the players, makes Blackwake one of the most interesting titles on our list.

While The Secret of Monkey Island doesn’t feature intense naval battles or any activities at sea, it is still very much a pirate game. The story of Guybrush Threepwood and his quest to become a pirate bears all the markings of a pirate tale – a young protagonist dreaming of becoming a pirate, a mysterious treasure hidden on an island, and a ruthless pirate ghost. 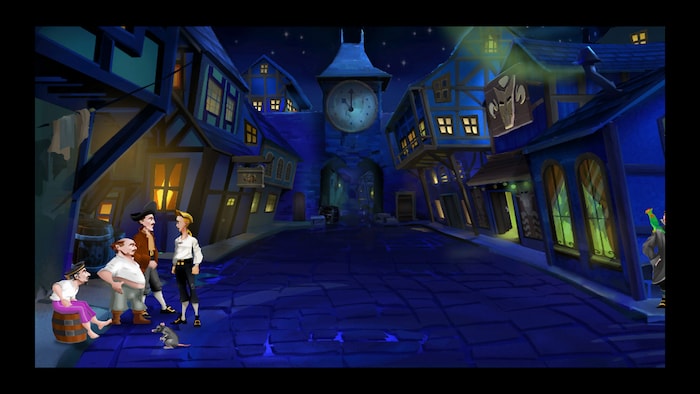 Gameplay-wise, TSoMI is a typical adventure game. The player collects items and solves puzzles to progress the story. It’s not much compared to the previous titles on our list, but for the fans of the classics, The Secret of Monkey Island is an absolute must-play.

In the second installment of Obsidian Entertainment’s RPG series, the players take their party to the sea, exploring the Deadfire Archipelago. The plot of Pillars of Eternity II: Deadfire puts the player against Eothas, the god of rebirth, whose reemergence spells doom for the world. Tasked by the god of death, the protagonist musters his party to hunt down Eothas, who fled towards the titular islands. 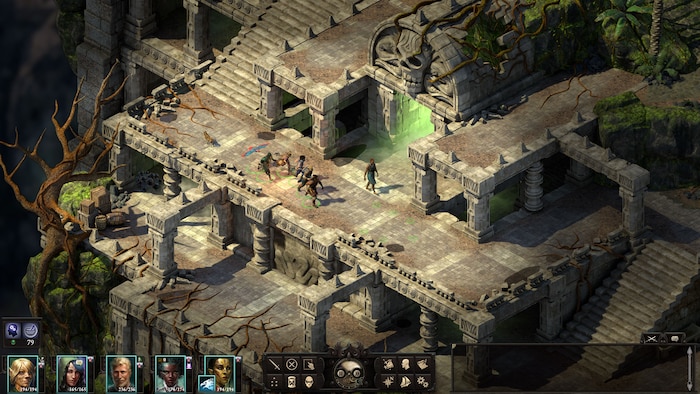 The mechanics of Deadfire remain similar to those from the original Pillars of Eternity. The play travels through the archipelago, facing various enemies and forging alliances with its factions. A new gameplay feature are the ship crews – the player can expand their fleet to include multiple vessels that need to be looked after, hence the necessity of hiring a qualified crew.

Based on a popular manga and anime series, One Piece: Burning Blood takes a less serious approach to the theme of piracy. Unlike the previous games on our list, which presented the pirate more or less accurately, Burning Blood focuses solely on flashy anime-style action. 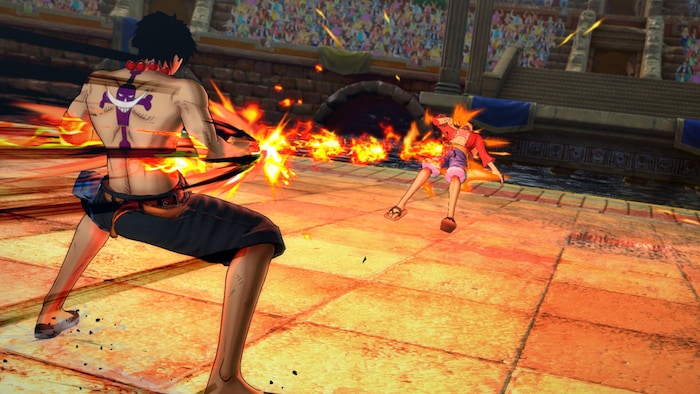 OP: Burning Blood is a fighting game, full stop. The player can participate in two modes. Story mode takes the player through the adventures of Luffy and his friends. WANTED Versus pits the players against randomly selected opponents. Defeating them is rewarded with money and items.

The game featured the third mode, called Pirate Flag Battle, where the players could fight against each other for control over specific areas. This function was terminated in October of 2020. Still, the game offers plenty of fun for the fans of the series and those who enjoy good fighting games.

In a way, Windward is almost a roguelike game. The player controls a ship in a procedurally generated world, in which they will encounter dangerous pirates, trade with cities, and explore what lies beyond the horizon. The latter task is made more difficult by the fact that the game’s world expands with the player’s progress. 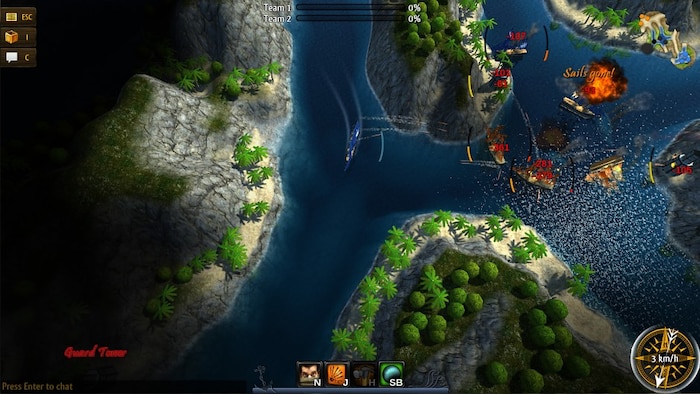 Windward is an excellent title for those who want to tailor their gameplay experience. Nothing stands in the way of the player becoming a ruthless sea mercenary, rich trader, or explorer of faraway lands. The player can affect the world in many ways, expanding cities they encounter by taking more consignments. However, traveling and expanding farther increases the risk of meeting really tough opponents. This is why the player should never forget to invest in their vessel’s upgrades. After all, the captain is worth as much as the ship he sails.

Back in the mid-2000s, the Pirates of the Caribbean series was one of the most popular franchises in existence. It reinvigorated the interest in the pirate film genre and gave the world one of Johnny Depp’s most memorable performances – Captain Jack Sparrow. The movies were followed by plenty of video game adaptations, with LEGO Pirates of the Caribbean being the most recent. 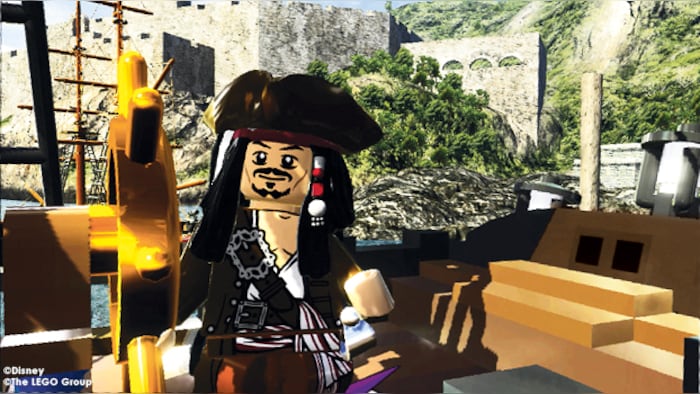 The game follows the well-trodden path of previous LEGO games. The player can relive the moments from the movie series parodied by LEGO minifigures. Seeing the shenanigans happening on the screen makes the already funny moments even more ridiculous.

Each playable character has unique abilities they can use during the exploration of levels: Jack Sparrow can use his compass to locate hidden items, Will Turner can throw axes at objects (helpful in completing certain objectives), and Davy Jones and his crew can walk and breathe underwater. The game is an excellent choice for the fans of the movies or younger players who want to experience a fun pirate adventure.

Finally, the undisputed classic among the pirate games. Sid Meier’s Pirates! takes the player back to the Golden Age of Piracy, when ruthless sea bandits ruled the waters. The player controls a man whose family was enslaved by the cruel Spaniard, Marquis de la Montalbán. As a young adult, the protagonist decides to hunt down the man who ruined his life. He becomes a sailor under one of four great naval powers and embarks on a sea-spanning quest for vengeance. 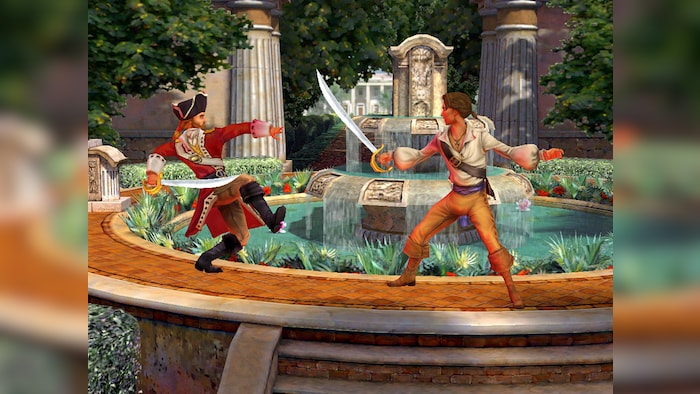 Pirates! share a lot of gameplay mechanics with the other popular Firaxis’ title – Civilization. The player controls their ship, exploring the game world, completing missions, and participating in other seafaring activities. Aside from voyaging the seas, the player can come ashore as well. Land activities include ground battles and sneaking into town after being denied entry. Pirates! features several minigames that can be triggered throughout the game, such as sword-fighting and dancing. All these mechanics make for one of the most versatile games on our list and a must-have for the fans of pirate-themed entertainment.

Despite its questionable morality, a pirate’s life is pretty awesome! Imagine sailing worldwide, living the life of adventure, not bound by rules of the law – who wouldn’t want to try that? Thanks to the games from our list, you can taste that life while staying well within the bounds of the law. We tried to present a whole spectrum of titles – from action-packed FPS’s to strategic RPGs. Like the characters that inspired them, pirate games are colorful and full of surprises, and we are sure that you will enjoy them tremendously.