Point-and-click games – the most classic of the classic adventure games – have been going through a renaissance of sorts in recent years. Thanks to the licensed titles of Telltalle Games, such as The Walking Dead series, The Wolf Among Us and Tales from the Borderlands, the contemporary players had a chance to get to know the excitement of clicking on every possible object on the screen in hopes that it was interactive and would lead to another section of the level.

Many indie studios saw the potential of point-and-clicking at everything and applied it to its productions, giving birth to some really good games. But while recent years have been good for the genre, it is in the past where the true point-and-click treasures live. So, let’s take look at the best games that had us ruin our mice, and joints in our fingers.

Day of the Tentacle

Day of the Tentacle is a classic point-and-click title developed and published by LucasArts – the studio better known for their games based on the Star Wars saga.

Day of the Tentacle is the sequel to Maniac Mansion and features some of the characters familiar to those who played the original game. The story revolves around the Purple Tentacle – a monstrous lab assistant of Dr. Fred Edison – who gains vast intelligence and ambition for global domination after drinking a mysterious ooze. The only ones who can stop Purple’s march for power are three friends – Bernard, Laverne, and Hoagie – who travel to Dr. Fred’s location at the request of Green Tentacle – Purple’s brother. 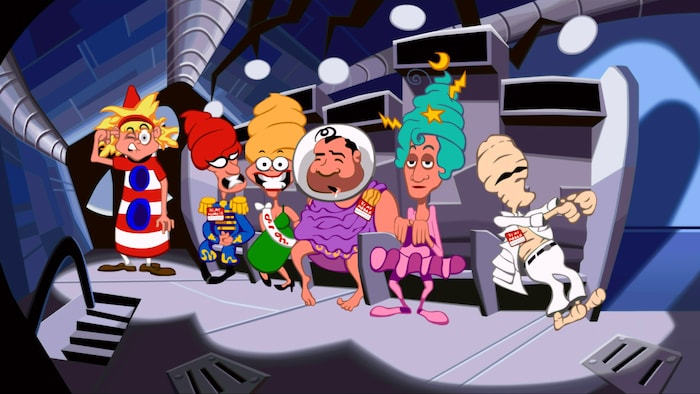 DotT features the classic point-and-click mechanics, based on the SCUMM system developed by LucasArts’ Ron Gilbert – the player has sever options of how to interact with the objects on the screen, including giving, picking up, using, opening, etc. The player can switch between the three protagonists, who become separated throughout time. Partial inventory sharing is available through the use of Chron-o-johns, which allows solving puzzles in three different time periods. The player can also play the original Maniac Mansion game by using an in-game computer.

Day of the Tentacle received positive reviews for its absurd humor and gameplay the solution, at the time, considered highly innovative.

Day of the Tentacle

Another adventure title from LucasArts, Grim Fandango was the first game from the studio to use 3D graphics. Based on the themes of Mexican folklore, Grim Fandango takes the player to the Land of the Dead, where the souls of the departed live.

The main protagonist of the game, Manny Calavera is a travel agent, escorting souls on a four-year journey through the afterlife, towards the Land of Eternal Rest. One day, Manny encounters Mercedes Colomar – Meche. She is a good soul who should be provided with the best traveling package, yet it was denied to her. Escorting Meche to her destination, Manny finds out about the plot reaching deeply into the LND OF THE Dead’s underworld. 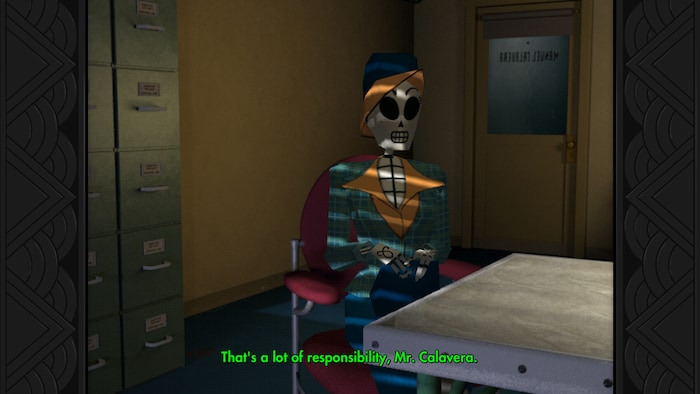 The gameplay mechanics of GF involve collecting objects and using them to interact with the environment, other objects or NPCs. Thanks to the 3D game engine, the player doesn’t have to hover over an item to find out if it’s usable – Manny will turn his head toward any object that can be interacted with. The game includes a conversation tree system, which will help the player along the way, pointing them towards the solution of puzzles or indicating what needs to be done.

Grim Fandango received positive reviews for its cast, setting, and story. The game was remastered in 2015 to similarly solid reviews.

Papers, please is the first game on our list that came out in more modern days.

An indie title from 2013, it puts the player in the shoes of an immigration officer in a state of Arstotzka. The player’s job is to determine whether the person is allowed to enter the country. Various tools are available for the player to use in checking the validity of the entrant’s passport as well as performing the background and medical check. 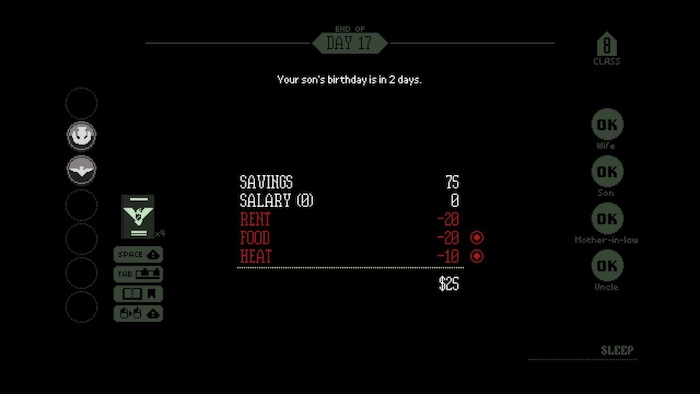 Each workday gives the player new challenges, new lists of undesirables and new hard choices to make. The game emphasizes the moral side of border control officer – certain entrants will try to bribe their way into the country or plea to the player’s conscience to enter the country. The player has to decide whether or not to accept a bribe, at the risk of being reported and arrested,  or let the pleading entrant in, knowing that they might be attempting a terrorist attack. The player is also contacted by EZIC – an organization urging the player to help them overthrown the government. Choices have to be made whether or not to aid them in their mission.

Papers, please received critical acclaim for the gameplay that challenges the player’s morality. The game is considered to be one of the titles that blend art and entertainment.

Another contemporary title, this time from the studio that managed to put the point-and-click adventure genre back on the map.

Telltale’s The Wolf Among Us blends the solid narrative and gameplay features that keep the player glued to the screen. The story, based on the Grimm’s Fairy Tales, takes the player to the world where fantastical creatures, known as Fables, live among normal humans. Bigby Wolf is the Sherrif of Fabletown, a Fable enclave located in Manhattan. Together with his partner, Snow White, he investigates a series of murders occurring in the area, threatening to destabilize the fragile cohabitation of humans and Fables. 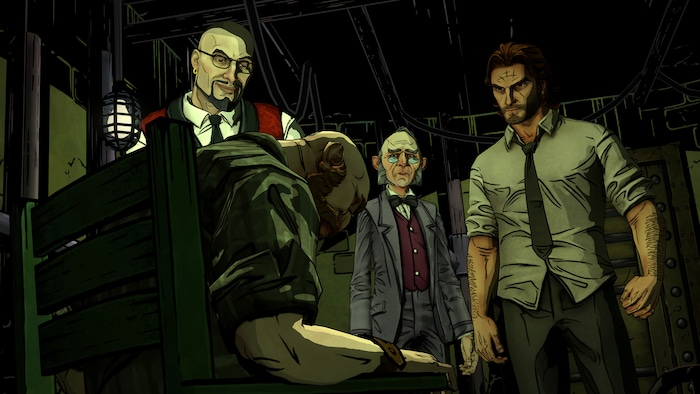 Like many of the Telltale Games’ titles, TWAU emphasizes the player’s choice through selecting dialogue options, and making split-second decisions that have the lasting effect on the progress of the story. The game features familiar quick-time events, during which the player will have to input a command within a split second to perform an action.

The Wolf Among Us received critical acclaim for its setting and film noir atmosphere, and it has become a cult classic among the fans.

The Longest Journey took the genre of adventure games by a storm with its complexity and detailed approach to world-building.

The game is set in a fantastical world, where two parallel planes exist – Arcadia, the realm of magic, and Stark, powered by industry. Both worlds exist unaware of one another. The protagonist of TLJ, April Ryan is an 18-year-old Starkian, who is a Shifter – a person capable of moving between the worlds. As the story progresses, April discovers that both planes are in grave danger and she is the only one who can stop the impending doom. 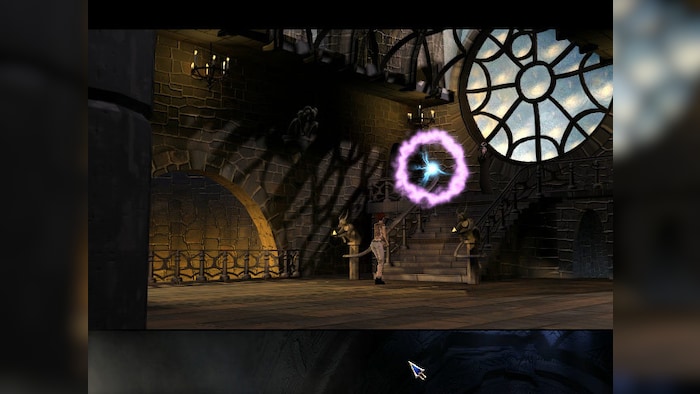 The Longest Journey presents a highly detailed setting, with hours of dialogue recorded just to establish it. Throughout the gameplay, the player will explore bot Arcadia and Stark, interacting with the citizens, collecting necessary items and figuring out the way to save the two worlds from destruction.

TLJ received high praise from critics for its level of dedication to worldbuilding and storytelling craftsmanship of the writers. The game received several accolades from the industry press, including the title of the best adventure game of 2000 from Computer Gaming World magazine.

Broken Sword – The Shadow of the Templars: Director’s Cut

2010 saw the return of one of the most popular adventure games in history – Broken Sword. Director’s Cut is an enhanced remake of Broken Sword: The Shadow of the Templars, the first game in the BS series, released in 1996.

The game tells the story of George Stobbart, an American tourist who gets involved in a conspiracy put in motion by the remnants of the Templar Knights to recover mystical idols that would grant them the power to dominate the globe. 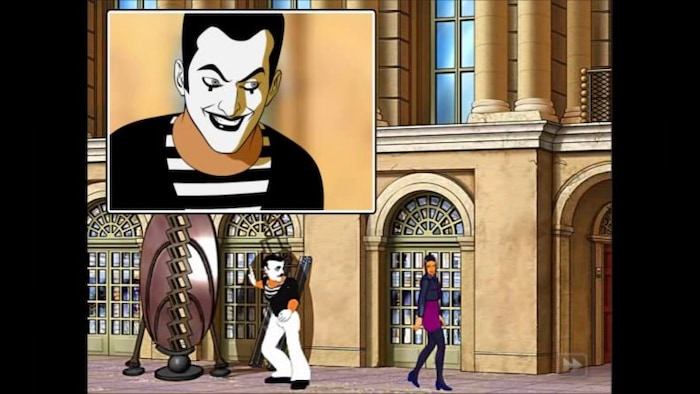 Despite being a remake, the Director’s Cut remains faithful to the series roots and retains most of the gameplay mechanics the fans of the series fell in love with back in 1996. The player gets to explore the 2D environments, solve puzzles and interact with objects and NPCs. The game introduces the second playable character – Nicole, whom the player can control during certain levels.

Broken Sword – The Shadow of the Templars: Director’s Cut was met with positive reviews and received several awards and nominations.

Broken Sword – The Shadow of the Templars: Director’s Cut

Now we’re going way back, aren’t we? Created by Ron Gilbert, who worked with LucasArts’ Tim Schafer and Dave Grossman, the story of the game takes, Guybrush Threepwood, the main protagonist and an aspiring pirate through multiple trials and tribulations in the search of the treasure hoarded by legendary sea devil, LeChuck. 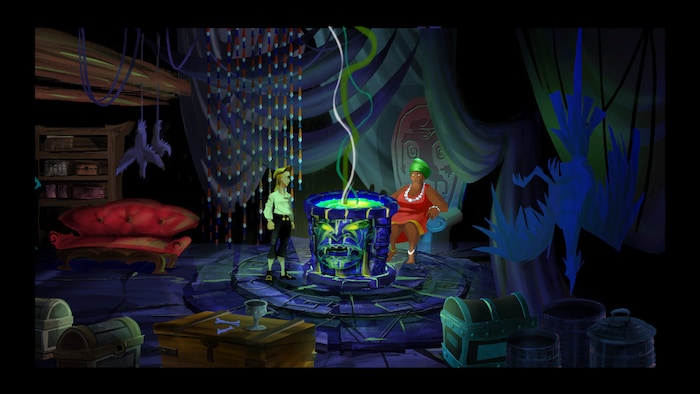 Due to Gilbert’s frustration with the adventure games’ mechanics at the time, Monkey Island does not feature player character death and focuses heavily on exploration and interaction with in-game objects and other characters as well as conversations using a dialogue tree.

2017’s title from Terrible Toybox was designed by Ron Gilbert and Gary Winnick, who worked together on the Maniac Mansion and Monkey Island series’.

The developers decided to employ the slightly archaic design and mechanics familiar to those who played the point-and-click adventure games of the early 90s. Thus, after a successful crowdfunding campaign, Thimbleweed Park was born – a 2D-graphics adventure game about two FBI agents investigating a murder case in the titular town. 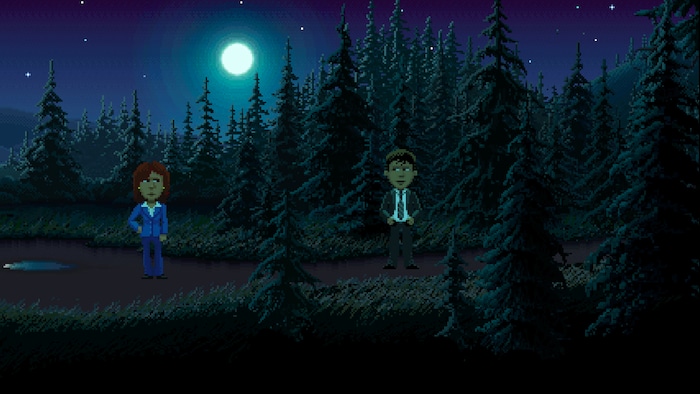 The gameplay mechanics are no different from those in the early adventure games – the player has nine commands they can give to their characters to interact with the environment. The game received positive reviews and was nominated for Golden Joystick Award for the Best Indie Game of 2017

Tim Schafer strikes back on our list this time with something a little different! Instead of helping sentient tentacles stop their brethren from taking over the world or living the pirate life on a haunted island, enjoy a wild ride as the leader of a biker gang.

Full Throttle’s protagonist, Ben, is roped into helping an elderly head motorcycle company. But when his employer is killed and his gang jailed from murder, Ben must use all his wits to prove their innocence and clear the Polecats’ name. 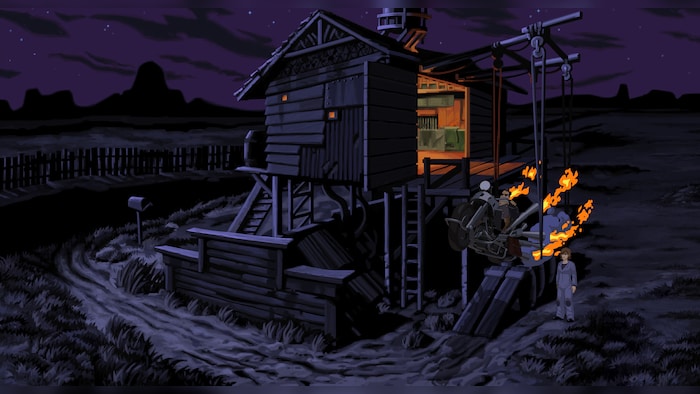 Gameplay-wise, Full Throttle follows all the patterns of other LucasArts games – the player interacts with the environment using various commands and talks with NPCs in the dialogue tree system. What changed is that unlike the previous LA games, the interactions occur through choosing an icon on the selection wheel, instead of being available on the bottom on the screen. The player’s inventory can be summoned by right-clicking the screen – the items can then be dragged and dropped to use them.

Full Throttle received positive reviews from the critics, who lauded the animation, soundtrack, voice-acting and the humor of the title. The game would later become a cult-classic among the fans of adventure games.

Indiana Jones and the Fate of Atlantis

The Fate of Atlantis might not be the first Indiana Jones game but out of these first efforts to digitize the adventures of the brave archaeologist it offers the ost movie-like experience.

In TFoA, Indy is tasked with stopping the Nazis from harnessing the power hidden in the lost city of Atlantis and using it in war. Aiding him in his quest is Dr. Sophia Hapgood, an archaeologist-turned-psychic. 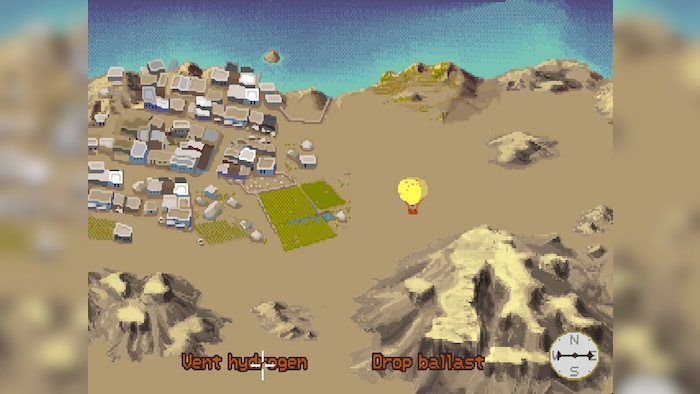 Gameplay in TFoA is based on LucasArts’ trademark SCUMM system – the player selects commands and items to use from the area in the bottom of the screen. The adventures of Indiana Jones in search of Atlantis will wow the player with three unique game modes – in Team Path, Sophia aids Indy throughout the game; in Wits Path, the main focus is placed on solving puzzles; in Fists Path, the player can roll out the good ol’ fisticuffs, smacking the enemies around.

The game turned out to be a huge success for LucasArts, receiving positive reviews and titles of the best adventure game from several outlets. The reviewers especially praised the three modes of gameplay, which added to the replayability value.

Indiana Jones and the Fate of Atlantis