Horror games come in all shapes in sizes – apart from differences in the visual style, gameplay, and mixes of other genres thrown into the package, they can be either 2D or 3D, but for the sake of today’s article, we’ll focus mostly on 2D platformers.

These games can be quite scary, too, and they have a major advantage over more advanced 3D productions – they are much more forgiving when it comes to the system requirements, so you can usually play these games even on low-end systems that weren’t even meant to be used to run games in the first place.

If you’re looking for a great side scroller horror game to kill some time, we’ve got you covered – just take a look at our list down below.

A successor to Limbo, which will appear later on the list, is all about solving environmental puzzles while avoiding the dangers – and it’s surprisingly fun. 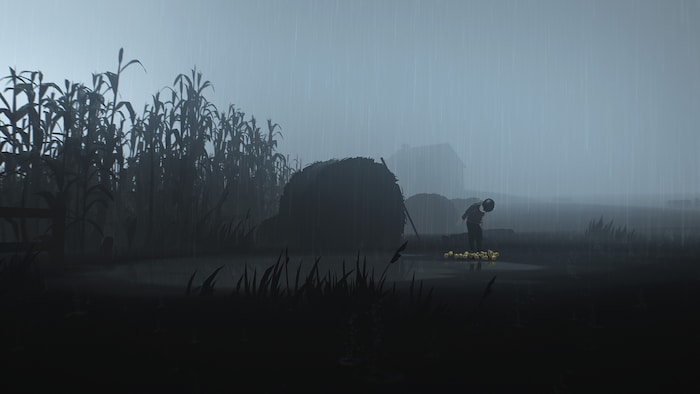 Inside is a puzzle-platform game about a boy exploring a surreal world. The game’s main selling point is undoubtedly the atmosphere and desaturated aesthetics. One could even say that it’s more of a little piece of art than it is a game, and he wouldn’t be completely wrong. Locations have an unsettling vibe to them and whenever you’re out in the open you start to feel anxious, even if there’s no one around there. You just feel being constantly watched, and dark and foggy locations only enhance the entire experience.

If you’re looking for a game that’s one of its kind, Darq may be just the game, thanks to its unique gameplay that revolves around rotating parts of the level to gain access to seemingly inaccessible places. 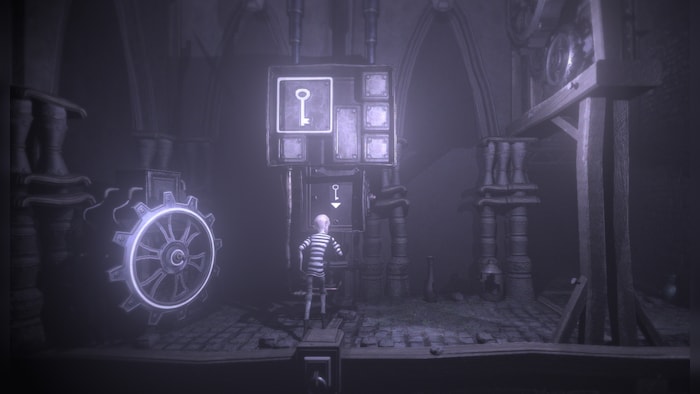 Darq is a puzzle game that puts emphasis on stealth and focuses on the story of a boy trapped in a dream. Your job here is to help him navigate through the surreal maze in order to learn the purpose of the dream and hopefully find a way out. What makes the game so cool is the fact that you can rotate certain parts of the level to alter the surroundings and get to places that may seem to be out of reach at first. In simpler terms – what’s the floor at one moment can become the ceiling a moment later. It’s one of the core gameplay mechanics that will help you solve a lot of the game’s puzzles.

Night in the Woods instantly stands out from the crowd of similar games due to its unique art style, but it’s not the only thing that makes this little gem special. 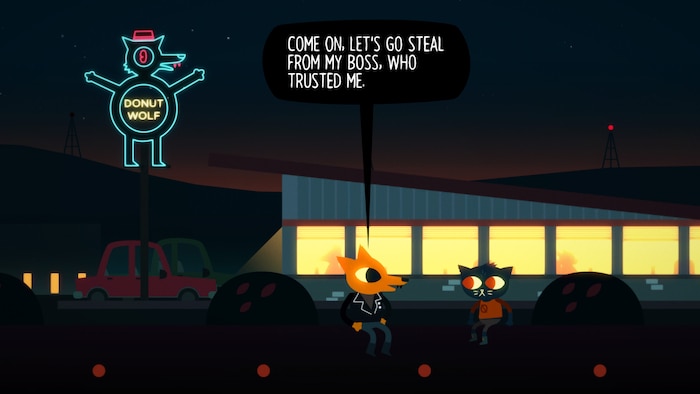 Night in the Woods is an adventure game with adorable anthropomorphic characters and colorful visuals, which could suggest a rather happy story being prepared to be told, but it’s not exactly true. Don’t let the bright colors fool you – Night in the Woods incorporates ghosts and the elements of madness into the story to make the experience much more interesting. Your task in the game is to find your lost friend, so explore the surroundings and look for clues that could lead you to solving the case.

Limbo is a very unique game – even if it doesn’t look scary, there’s something about it that can make you uneasy or anxious. 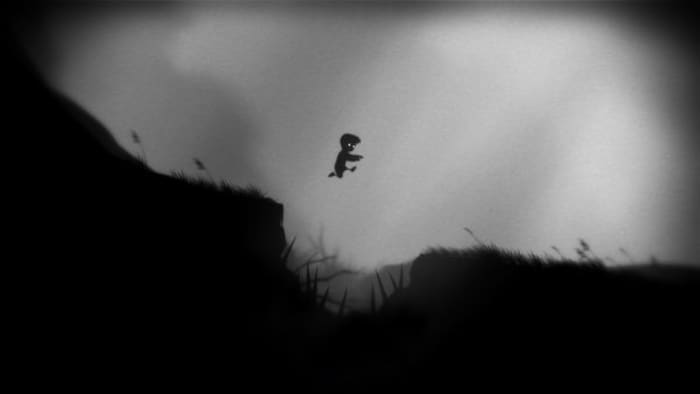 Limbo focuses on the story of a boy as he travels through the unknown – an eerie environment and subtle ambient sounds will keep you company throughout the game. Your objective is to find your missing sister but it’s easier said than done – the place you’re currently in is full of puzzles that need to be solved before you can get access to further parts of the map, as well as deadly surprises that are well hidden and can’t be spotted right away due to the game’s silhouette-style visuals. The game’s atmosphere is built by creepy ambient sounds and an art style that lacks color – everything is shown in greyscale, which gives the game a mysterious aura of surreality.

Little Nightmares doesn’t seem to be scary at first but things quickly change into a festival of grotesque as you progress through the game. 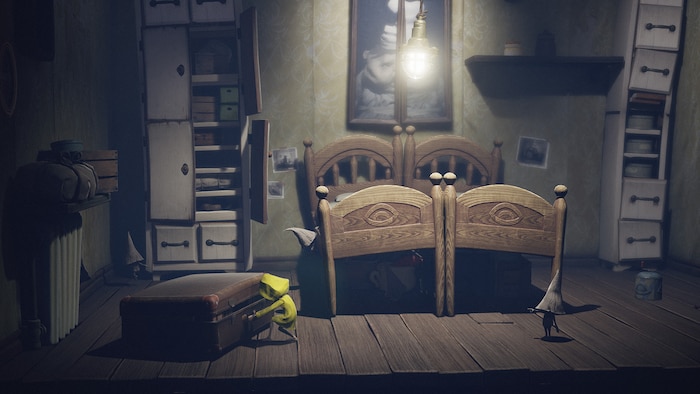 In Little Nightmares, you will be controlling a little girl as she explores the surroundings and tries to escape the Maw – a vessel of corrupted souls. Gameplay-wise, the game puts emphasis on exploration and puzzles, with the addition of some more fast-paced sequences that require good reflexes and quick thinking. More often than not the game seems to be playing itself – it’s one of these interactive adventures that choose to focus more on presenting the actual journey and the main character’s struggles, which is completely fine for this type of scary indie game. If all of that sounds fun to you, make sure to check out the game’s sequel as well.

Neverending Nightmares is a dark and sad horror game that builds upon various types of mental illnesses, including depression and obsessive-compulsive disorder – the lead designer’s real-life problems. 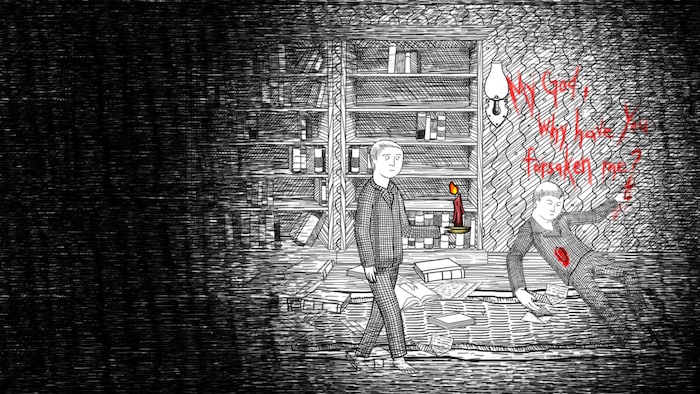 Neverending Nightmares is a survival horror that won’t give you much room to take a breath. Ambient sounds combined with blood and certain creepy visual elements that are a part of the environment result in a lingering eerie feeling that can’t be easily shaken off. The game stands out from the crowd of similar productions due to its sketch-like art style, which is rarely seen in video games. Experience the life of Thomas and his descent into madness as he wakes up from one nightmare to another. If you think that sketches can’t be terrifying, you’ll be surprised.

The Missing: J.J. Macfield and the Island of Memories

There are also some cool platformers that have a Japanese anime vibe to them and The Missing is a great example of a such game. 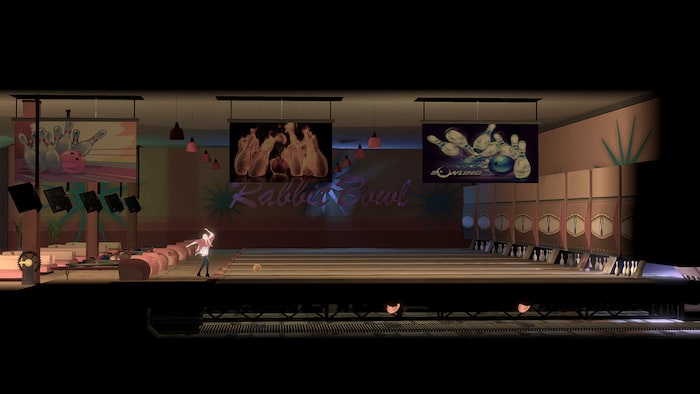 The Missing: J.J. Macfield and the Island of Memories is a puzzle-platformer video game where you will be playing as a girl named J.J. who is tasked with finding her lost friend. The atmosphere is generally creepy and eerie which is further reinforced by the fact that the protagonist must inflict self-wounds to solve puzzles. The game is a unique experience and although the gameplay is focused mostly on exploration and finding a way through the levels, it doesn’t feel repetitive – it’s like a long journey filled with surprises while horror elements make everything so much better and immersive.

The Missing: J.J. Macfield and the Island of Memories

For the final game on the list, we’ve got Black the Fall which touches quite a difficult topic of communist dystopia enslavement in a close-to-the-bone manner. 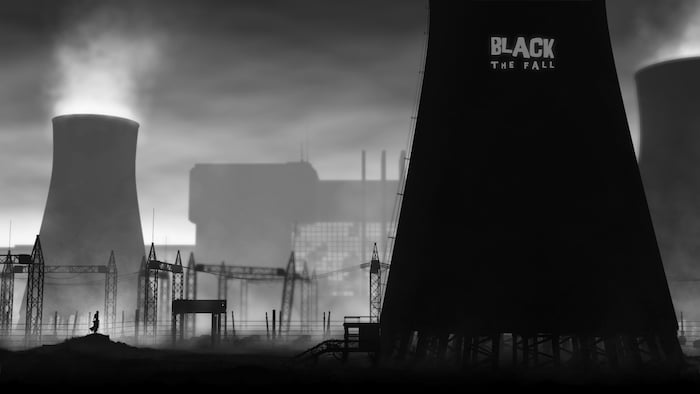 Black the Fall is a puzzle-platform game that revolves around escaping a communist dystopia. As a nameless machinist who tries to seize the opportunity, you’ll have to avoid detection and navigate through a variety of different locations to break free. What makes the game unique is how the camera works – it’s sometimes referred to as a 2.75D due to the fact that although it’s a side-view game with a 3D environment, it offers limited 3D gameplay. Are you ready to make a change and play your part in history? Then lead the people against the oppressive regime and help them to overthrow the government.

If you love scary games but your system doesn’t allow you to run the most recent extremely polished 3D AAA games, you can always resort to smaller and much more accessible 2D platformers. Of course, it doesn’t mean that you shouldn’t play such games if you have a solid PC, though – some of these 2D games can easily rival much more expensive productions when it comes to the gameplay and the fun factor.