He’s blue. He’s super-fast. He’s an icon. Sonic is basically one of the most revered video game characters of all time, with his popularity rivaling Mario’s. This spiky fella is a protagonist of a beloved franchise that boasts some of the best platform games ever. Which ones? Here’s our ranking.

Created by programmer Yuji Naka and artist Naoto Ohshima, Sonic quickly became a real sensation and is now one of the most recognizable video game characters ever. How many copies of all Sonic games have been sold so far? Over 80 million, like, 89 million or so. Quite a success, isn’t it?

We’ve picked the ten best games in the Sonic the Hedgehog video game series that both newcomers and those looking for more Sonic adventures should totally pick up, as we’re sure they’ll love them. Why? Because these games are just so darn good! Here’s the first one on our list.

Let’s get the obvious one out of the way, shall we? Sonic Mania, along with its expansion, Sonic Mania Plus, is the best-rated Sonic game in, like, fifteen years, often called a return to the series’ form. And it’s classic Sonic, too (although some people see it as a downside, but hey, you can’t please everyone, right?). 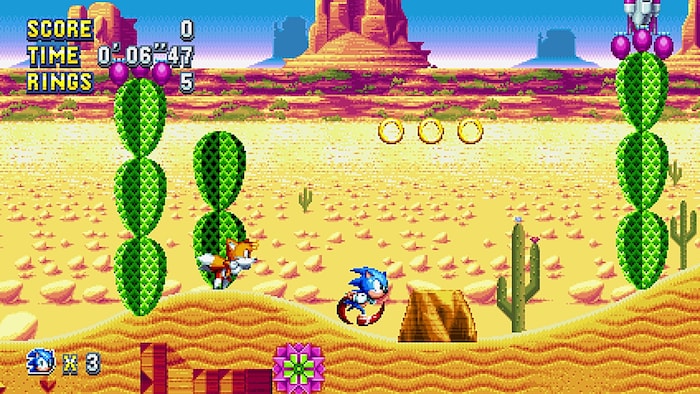 Built on Christian Whitehead’s Retro Engine, Sonic Mania sports an excellent retro-style look. Why Mania? Well, no one came up with a better title, so this one stuck. The gameplay is very much like the old games. You pick one of the three characters – Sonic, Knuckles or Tails – with their unique powers and go fast through twelve varied levels where you avoid enemies, as well as other obstacles, and race towards the end. Special levels are also involved. There’s also the time attack mode where you compete against other players and try to beat their best scores.

Sonic Mania Plus added new characters, levels and modes, expanding upon the base game. Sonic Mania is generally seen as one of the best Sonic games and 2D platformers ever.

This one is also super important, as it is the OG Sonic game. Released in 1991, it quickly became a smash hit, launched Sonic into stardom, made Sega Genesis a direct competitor to Super NES and spawned a super successful franchise. 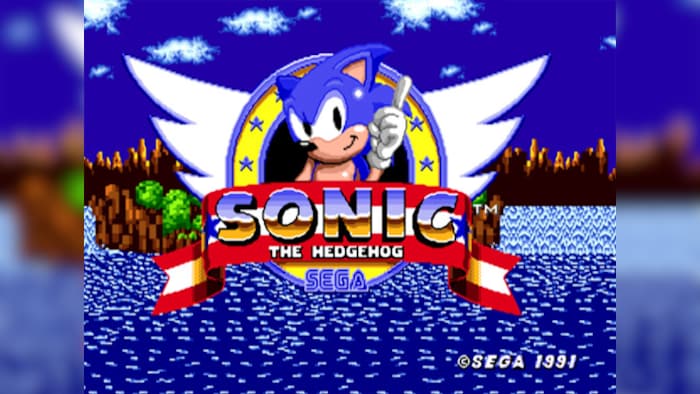 This is also a good moment to tell newcomers to the series what this whole game is about. So, you play as the titular spiky mammal capable of running at incredible speeds. The controls are simple, both jumping and attacking are actions performed using the same button. You run towards the end of a level, collect golden rings that act as health, avoid obstacles, defeat enemies using the Spin Attack and fight bosses, including the ultimate battle with the main villain, Dr. Robotnik. There’s also a time limit, of course, so you need to complete a level within a certain timeframe. If you fail to do so, you’ll lose a life and will have to start from the last checkpoint – until you run out of lives and continues, of course.

Again, it’s been one of the best-selling games of all time and was very well-received by reviewers and gamers alike.

While third on this list, the sequel to the original Sonic game is definitely a major improvement over the predecessor. No wonder it became a yet another best-seller and received such rave reviews. 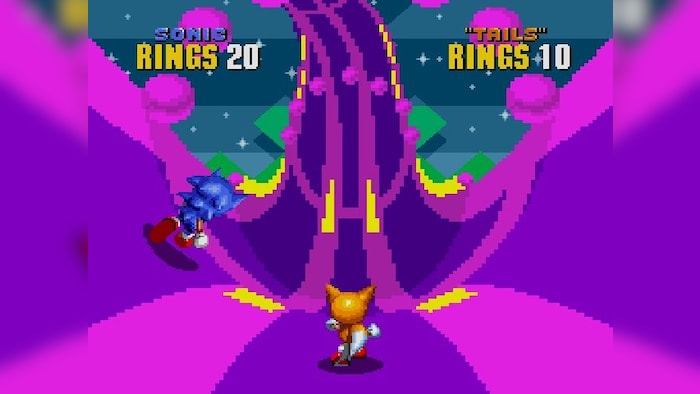 Still, people weren’t too happy with the new character, Tails, added to the game and the multiplayer component was also criticized for some reason. When starting the game, you can choose the character you want to play as: either Sonic or Tails. But you can also control them both at the same time, with the latter following you all the time. This is what some folks found really irksome, as the gold fox apparently gets in the player’s way more often than he should and interferes with boss battles.

This game is probably best for newcomers, although it’s aimed at both the peeps who are fresh to the franchise and its long-time fans. 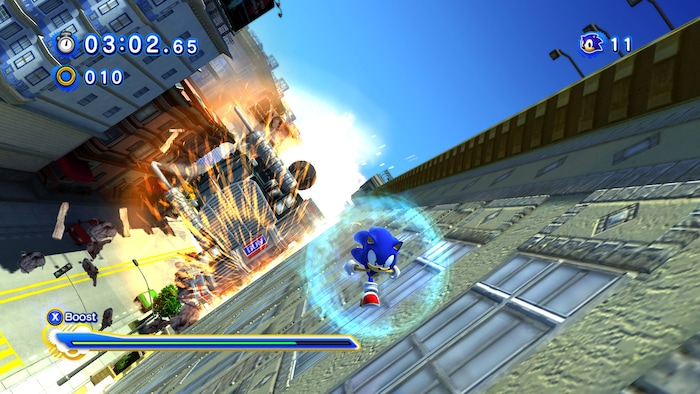 A combination of traditional 2D Sonic gameplay and the 3D installments – Sonic Unleashed and Sonic Colors – Sonic Generations makes the player travel in time. Sonic and Tails need to ally with their past selves to thwart an evil plot to alter the course of history and erase the villains’ defeats from the past.

The game features two variants: Classic and Modern. The former plays like a 2D Sonic game, while the latter is more akin to a third-person action-adventure game. Aside from that, it’s a title that’ll be well familiar to the fans. Sonic Generations is probably the best starting point for newcomers as well. It’s a great release, with fun gameplay and neat audio-visuals. Too bad the Nintendo 3DS version was sort of sub-par compared to others.

There’s a bit of a problem with this one. Sonic Adventure is a fantastic game, there’s no doubt of that. It’s one of the best not just in the series, but the entire platformer genre. 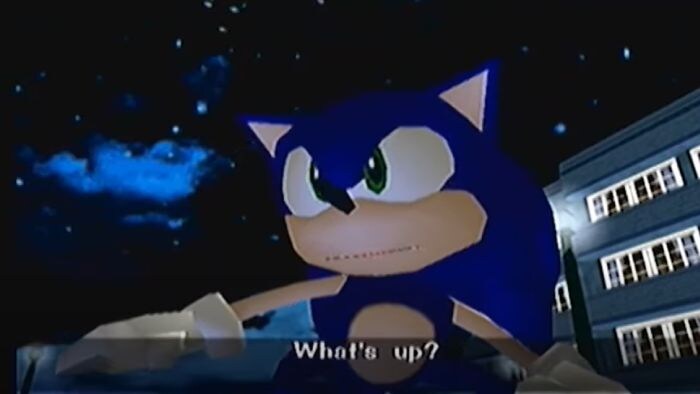 Sonic Adventure was the first major Sonic game in 3D, with gameplay – a mixture of platforming, action and even a bit of role-playing – changed in various ways to reflect this transition (still, key aspects and iconic elements of it remained, so it’s a classic Sonic game nonetheless). You can choose one of the six different characters to complete various levels and missions, utilizing their unique abilities. The game also showed the technical capabilities of Sega Dreamcast and was seen as a major advancement when it comes to hardware-related stuff.

It’s just too bad that future re-releases were a drop in quality. While Sonic Adventure DX: Director’s Cut (a port for the GameCube and PC) featured better graphics and more levels and challenges, reviewers said you’d be better off playing the Dreamcast version instead. The HD version, released in 2010 on Xbox 360 and PlayStation 3 (and a year later on PC), didn’t meet with a warm reception, either. Hence the 5th spot on this list.

The follow-up to the first Sonic Adventure was meant to commemorate the 10th anniversary of Sonic the Hedgehog and the related franchise. 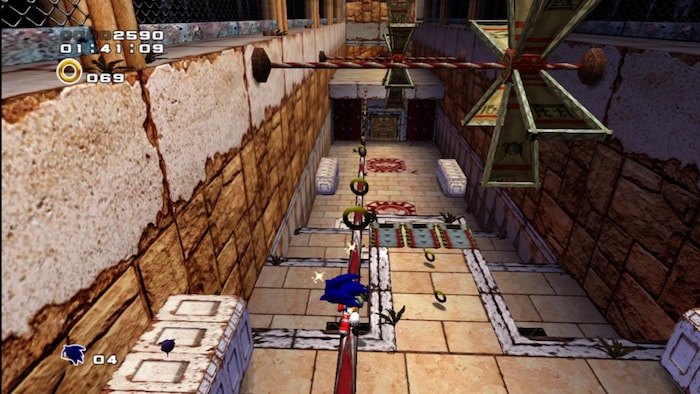 It’s a more action-oriented game (compared to the previous installment – it’s faster, too) featuring two stories about the ongoing battle between good and evil. Sonic, Knuckles and Tails are working to save the world from an evil plot by Shadow, Doctor Eggman and Rouge.

As such, Sonic Adventure 2 features three distinct gameplay styles: Sonic’s trademark ultrafast-paced platforming, multidirectional shooting and action-adventure exploration of open levels. All in all, it’s a fun, varied game. It looks and sounds great, too. Not everybody liked the camera work, plot and voice acting, though. Still, it’s a really good installment in the Sonic series that sold over 2 million copies worldwide. Definitely worth checking out!

Sega wanted their own kart racer, so they made one. Just like Mario Kart and the like, Sonic & Sega All-Stars Racing features over 20 characters coming from various Sega franchises, including a couple folks from Sonic games. 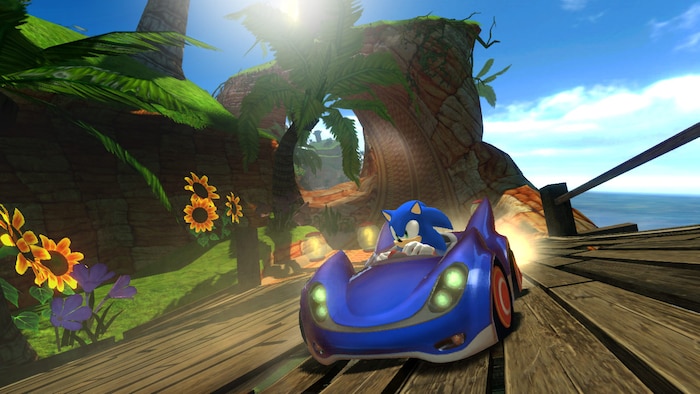 It’s basically a super-fun racing game where you collect power-ups and power-up countermeasures, perform tricks and race towards the finish line. If you’re lagging behind, you can perform an All-Star Move: a character’s ultimate ability that won’t just help you catch up with the rest, but actually beat them.

There are also three different vehicle types that behave differently depending on a surface and have their pros and cons. Sonic & Sega All-Stars Racing is fun and pretty addictive kart racer. If Nintendo’s franchises aren’t your thing, this one might be just for you.

This game (not to be confused with Sonic Adventure 1 & 2) has Sonic and Tails teleported to another dimension where they have to ally themselves with Blaze the Cat and face the evil robot pirates. 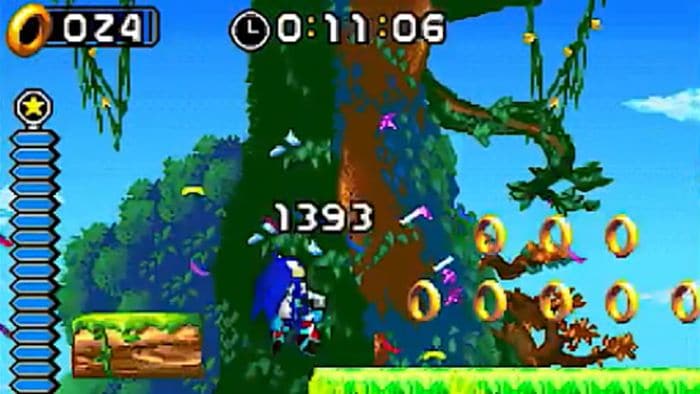 In general, it’s a side-scrolling platformer like the earlier Sonic titles where you control either the blue hedgehog or Blaze, collect rings that act as health and defeat your enemies. But there are also sea levels that offer a refreshing change of gameplay with boating minigames that utilize the power of Nintendo DS’s touchscreen.

Sonic Rush Adventure ranks low on our list, but the game is far from a bad one. While there’s little replayability and the story is rather boring, it is a very competent platformer that’s probably even better than the Sega Genesis Sonic games. Not much originality in here, but it’s definitely a quality title.

Sonic Colors was develop to address the series’ various shortcomings: mediocre games, various gameplay issues and the imbalance between speed and platforming. 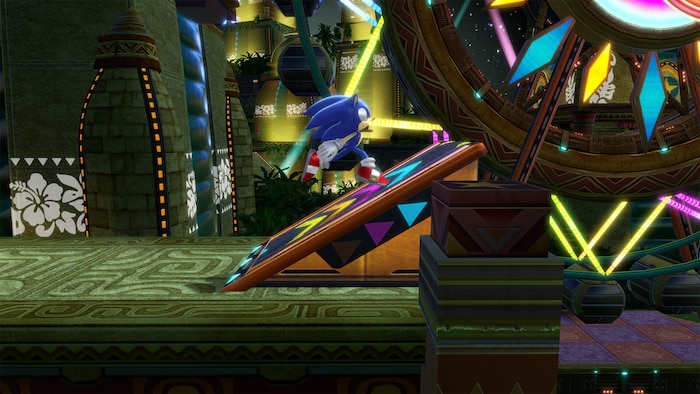 This is why the game features only one playable character, Sonic. It’s a rather typical game in the series, so you just keep collecting those dang rings and fighting enemies (this time you’re facing Doctor Eggman who wants to enslave an alien race and conquer the world, as usual – it’s up to you to stop him, of course), but there are also Wisps who serve as power-ups to increase your power, help you reach new areas and shake things up a little when it comes to the gameplay.

The Ultimate edition has been released in May 2021. It’s essentially a remaster available across all platforms, featuring enhanced presentation, as well as some new features and content. In general, Sonic Colors is one of the best Sonic games out there, especially for kids.

The fact that this game is the last one on this list doesn’t change the fact that Sonic CD is a classic, one of the best installments in the series. 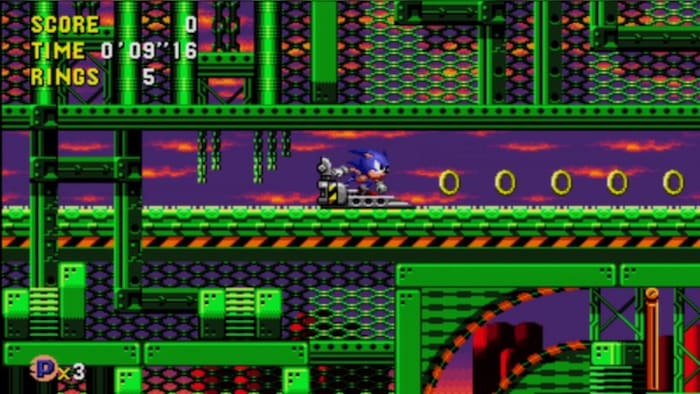 Of course, it’s a traditional Sonic game, but it features a neat time travel mechanic that lets you access past, present and future versions of a particular level through signs that say “past” or “future.”

All in all, it’s simply one of the greatest platformer classics. While the titles above are more modern and probably more accessible thanks to that (that’s why they ranked higher on this list), there’s absolutely nothing wrong with Sonic CD. If you love retro gaming, this one’s a must.

And this is it as far as the best Sonic games are concerned! Regardless of whether you’re a newcomer to the franchise and would like to pick a good starting title or a fan looking for more adventures, none of the games on this list should disappoint you. Pick one and have fun!