Between history and thousands of stories across media, swords have cemented their status as one of the coolest things humanity has ever invented. And they come is hundreds of variations, too! It’s no wonder that they eventually made their way to video games.

To celebrate the blade, especially their sensibly-sized video game incarnations, we’ve prepared a list of games where satisfying sword-fighting and cool swords are the point of their existence. Without further ado, let’s get on the arena and cross blades in one of the…

The SoulCalibur series is probably the most famous melee-weapon based fighting game series.

Although its roster of characters uses a wide variety of weapons, sword do play a huge role. Starting with the series’ main characters: Soul Edge and Soul Calibur, through katanas and rapiers, to folks like Sophitia and her ever-green sword-and-shield combo. Plenty to pick from.

SoulCalibur VI continues the series’ long tradition of being a fully 3D fighting game, plopping two players on an arena and letting them maneuver around freely, including pushing opponents out of the arena.

SC6 also features a powerful customization system, letting you not only tweak the existing characters, but also create your own, with access to all existing weapon types.

Although still in Early Access at the time of writing, Hellish Quart is already a fighting game that should grab the interest of any fan of historical European martial arts (HEMA).

It’s based on 17th century sword fighting across cultures, ranging from Swedish Reiters up north to Turkish Janissaries down south. Sabers, longswords, rapiers, all styles of swordplay are not only well-researched, but also very well animated.

It’s significantly less fanciful than SoulCalibur, aiming more for realism than spectacle. There are fast exchanges, measuring the tempo and distance, and one clean blow takes you out, no chip damage. There’s even a system for blade binding. It has relatively simple controls, and when you’re not attacking your fighter guards automatically, but that’s no way to win the match now, is it?

Kingdom Come: Deliverance prides itself on its historical accuracy, and with good reason.

The realities of medieval Europe are very well represented, and that extends to the combat system. While it works fine with many different weapons, it does best with the good old sword, which comes in several varieties: shortswords, sabers, longswords, and hunting swords, which are more akin to long knives.

Sword fighting is very active, with targeting and blade alignment modified by mouse movements. Of course, positioning remains essential, and you have to mind the armor of your opponents, trying to hit less-protected areas. Ideally: the eye slit of their helmet. It’s a great system, and while swords do serve you well for the entire duration of the game, sometimes it’s a good idea to switch gear.

The Dark Souls series is one of the gaming’s world most respected franchises.

Often prohibitively difficult, Dark Souls games pits you against dangerous undead, and especially against absurdly deadly bosses, most of which now existing as twisted mockeries of what they were in life. Meanwhile you are the unlucky ex-person who starts with shoddy armor, old sword, and has to preserve the world.

Across all three DS games the arsenal of swords of all sizes, from normal to way oversized is quite impressive, and aside from looking cool, they tend to affect your performance. The stamina-based combat system is challenging enough to motivate you to think about the coming battles before they even happen and to get the right build, stat- and gear-wise alike, for your playstyle.

Mordhau shares bits Hellish Quart’s HEMA foundations, that’s where the game’s title comes from, but it applies them to multiplayer PvP smashfest rather than tight duels. The meat of the game are sieges and big battles for a few dozen of players, both in teams or in a general free-for-all, with various modifiers applied to, for instance, the respawn system. 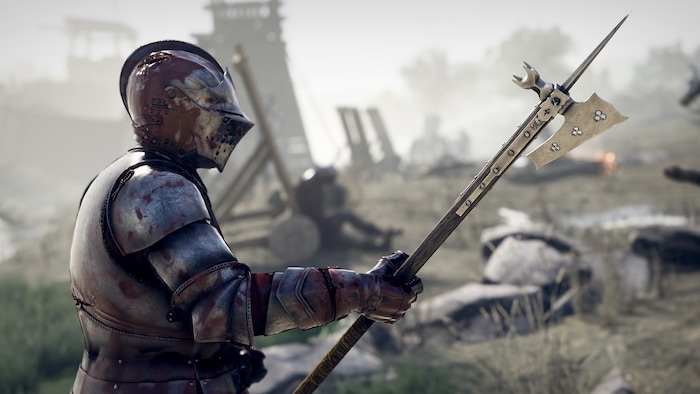 Mordhau is a classless game. It let you assemble your gear from a vast array of options, as long as the total point cost doesn’t exceed the budget. There’s a vast arsenal of all kinds of medieval-esque weapons, including swords, and some weapons offer some alt-fire options, such as the titular Mordhau, which makes the sword user more effective against armored enemies.

Among the lovely-looking games on this list Nidhoggs looks unassuming, but in reality, it’s a brilliant, and deceptively simple, little game. You’re playing as a pixelated figure with a fencing sword, fighting against other pixelated figures with fencing swords. The goal is simple: stab the opponent before they stab you and move on to the next stage.

Stabbing isn’t the only thing you can do, however. You can throw the sword at your enemy, or drop-kick them if you fancy. In fact, there are enough maneuvers and pretty locations for you to feel like it’s a Princess Bride adaptation, just with no dialogue. As a dueling game, Nidhogg of course features local multiplayer, so you and a friend can duke it out like Errol Flynn’s understudies.

Ghost of Tsushima is a game that’s stunning on every level.

You only have two swords, your family heirlooms: Sakai katana and tanto, but don’t worry. Not only do you get to upgrade them, but you can also unlock fancy skins by completing challenges, finding hidden locations, or just buying them from merchants. Coupled with fancy armor sets, you can not only be a ghost that terrifies entire Mongol camps, but you can also look cool doing so.

Sekiro: Shadows Die Twice was developed by FromSoftware, of Dark Souls fame, and it certainly shows in the difficulty level. This time you’re playing as a shinobi, who’s been given partial immortality by his ward. Unfortunately, said ward was kidnapped, and now Sekiro has to get him back and protect him from people who seek to exploit the boy’s divine gifts.

Sekiro’s gameplay is tight and intense, emphasizing well-timed parries and dodges when a parry wouldn’t cut it.

While you can deal chip damage, the goal is to throw the opponent so off-balance that an opening for a killing blow reveals itself. Unlike in other FromSoft games, in Sekiro you can die once and revive on the spot instead of getting forcefully dragged to the nearby respawn location.

Staying in the Sengoku period, how about Nioh. The yōkai are rampaging across Japan, making an already troubled time even more complicated.

You are playing as William Adams, based on a real English samurai, who ends up taking up arms against that supernatural crisis to further his own vendetta. And there are plenty of arms, from swords to more specialized weapons.

Not unlike Ghost of Tsushima, Nioh operates on a stance system. Here’s it’s a low, middle, and high stance, referring to offensive, defensive, and balanced approach, respectively. Coupled with weapon-specific progression, a vast array of equipment you can find over the course of the game, and your own skill, you receive a solid, tense sword fighting system, as expected from developers of Ninja Gaiden.

Beat Saber is a very different from other games on this list.

First of all, it’s VR-only. Second, it’s essentially a rhythm game that asks you to aggressively Fruit Ninja the blocks flying at you instead of furiously stomping on a dance mat. Each block has an arrow telling you in which direction you have to slice, and they are color-coded to tell you which laser sword you have to use on it.

Depending on the difficulty setting, you might have a mild warm-up or an intense upper body workout. While there are plenty of original tunes composed specifically for Beat Saber, you can also buy tracks from well-known musicians, such as Imagine Dragons, and start slashing blocks to their music. It’s an incredibly good fun, a fantastic party game, and lets you slice away with abandon to cool music.

To the death, or to the pain?

This concludes our list of games you should absolutely check out if you are crazy about swords. From action RPGs to rhythm games, these ten games share the intense sword focus of their gameplay, loot and occasionally even their plot itself. Hopefully you’ve found something that sounds exactly like a game you’re happy to try.