It’s February, and winter is reaching its peak. Unfortunately, due to the COVID-19 lockdown orders, we can hardly do anything to experience it. No hitting the ski slopes, no building snowman in the park, no ice skating.

To alleviate the pain of being forced to witness winter pass us by, we have a remedy in the form of the best winter-themed video games. Thanks to these titles, you’ll be able to capture at least a little bit of the season’s fun before it inevitably turns into an early spring slosh. And for a surprising twist – we did not include The Elder Scrolls V: Skyrim, as it is wrongly thought of as a winter game while presenting a range of weather conditions and climates.

The Most Popular Winter-Themed Video Games

Let’s take a look at the best games set against the backdrop of winter sceneries.

The first title on our list is Frostpunk – a game that isn’t about having a good ol’ time in winter scenery but rather survival in harsh conditions. The main gameplay features of 11 Bit Studios’ game are survival and city-building mechanics. 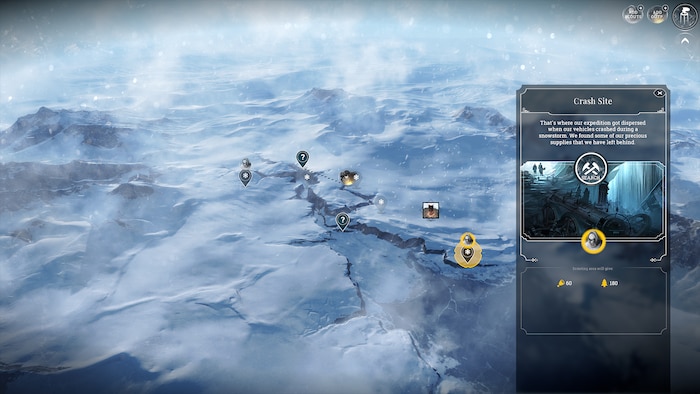 The player starts the game with a small group of survivors who need shelter, food, and most importantly – warmth. By collecting resources, the player can expand their settlement into a city, where they can rule the citizens with benevolence or subjugate them through tyranny. The player should also pay close attention to their citizens’ moods. It doesn’t take much for the spark of revolution to level the city, leaving the player back where they began – at the mercy of ruthless elements.

Lost Planet: Extreme Condition is a perfect example of a title that perfectly describes the content of the game. LP takes the player to the remote planet of E.D.N. III. Despite what the name might suggest, this ice-covered world isn’t welcoming to human explorers. 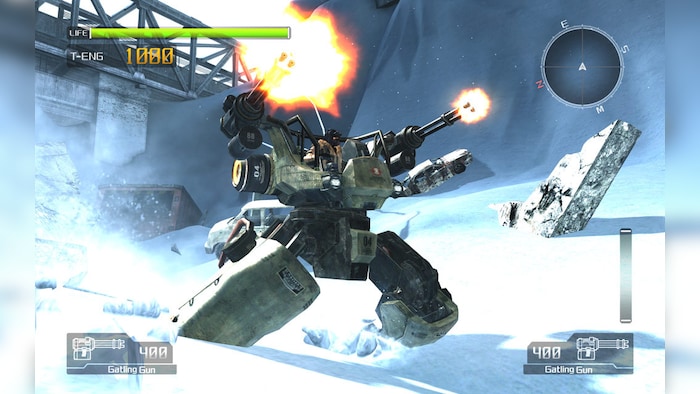 On top of extreme temperatures, capable of killing a person within minutes, the planet’s inhabitants – gigantic, insect-like aliens – are less than excited to share their home with the colonists.

The gameplay of LP: EC would be considered a standard TPP action fare, if not for a few mechanics related to the theme of survival in unforgiving conditions. The player character Wayne wears a special heat suit, which prevents him from dying within seconds of stepping outside the base. However, even that will not fully protect the protagonist from below-zero temperatures of E.D.N III. The suit requires a constant supply of heat energy, acquired from containers scattered around the map and also obtained from defeated enemies. This mechanic adds a layer of urgency to an already fast-paced action gameplay.

The latest installment of the Metro series finally takes the player outside the titular tunnels and allows them to explore the world above. Convinced that there is a colony of survivors out there, Artyom ventures into the unknown surface world, full of even greater threats than the ones hiding within the darkness of the Moscow metro. 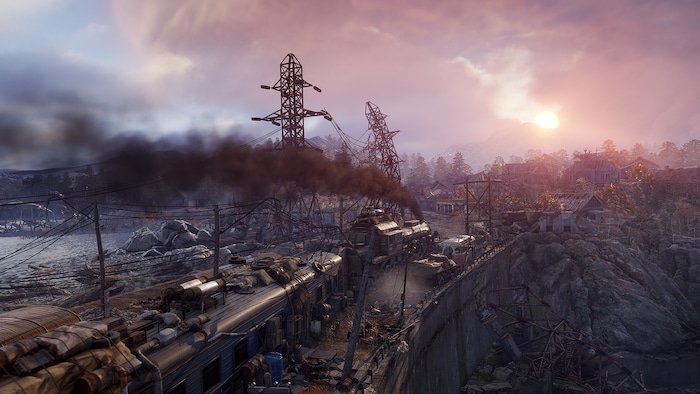 Setting the game outside the claustrophobic tunnels allowed the developers to present the larger, post-apocalyptic world of the Metro universe. The ruined streets of Moscow and its desolate suburbs create a frightening atmosphere. Another neat feature, lining up with the theme of this article, is the change of seasons and how it affects the world. Each season presents the player with new threats to face, from enemy factions to dangerous mutants. This makes playing Metro Exodus even more immersive.

You’re probably wondering what is a Batman game doing on our list of winter-themed titles. Well, to put it shortly, Arkham Origins is as much a winter game as Die Hard is a Christmas movie. The setting checks out, so it’s ok! 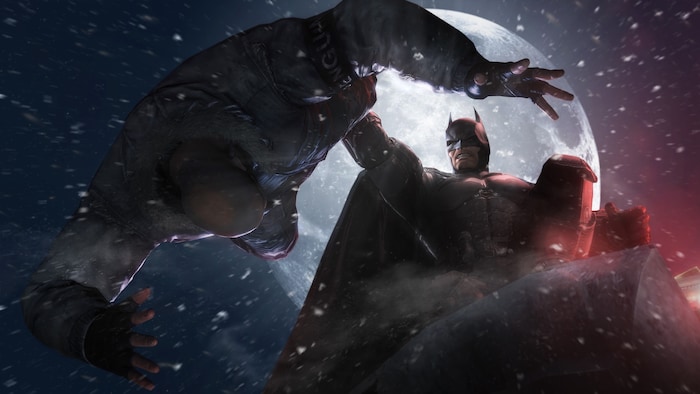 The story of the game is set on Christmas Eve. Batman is not yet the Dark Knight of Gotham City, and police see him as nothing more than a masked vigilante, no different than the common criminals. When the criminal boss Black Mask puts a bounty on Batman’s head, the streets of Gotham become a battlefield in the war between the Caped Crusader and the most notorious criminals in the city.

Everyone who had seen Batman Returns knows how good Gotham City looks during winter. The neo-gothic design of the city covered with snow is a sight to behold. The developers at WB Games Montreal managed to capture the same vibe: nothing beats gliding through the snow-filled air, only to drop to the street level to fight a bunch of hired goons.

THE LAST OF US REMASTERED – PS4

Much has been said about The Last of Us, a groundbreaking action-adventure game from the creators of the Uncharted series. Joel and Ellie’s journey has been deconstructed and reconstructed in every possible way, so here we will focus only on one aspect of the game – the seasons.

The game’s story is told through sections, based on the respective season they take place in. Joel and Ellie begin their journey in summer and finish it in spring. Each section has its impactful moments – for example, the memorable escape from Pittsburgh – but the winter level has made the biggest impression on the players. With Joel incapacitated, Ellie has to fend for her own hunted by a clan of cannibals led by charismatic David.

Winter sees both protagonists at their most vulnerable and cements the growing bond between the two. What’s more, the developers did a hell of a job at designing one of the most beautiful winter environments in recent gaming history.

THE LAST OF US REMASTERED - PS4

One of the biggest features of The Frozen Wilds is snow. In fact, it’s the only feature that matters. The developers at Guerilla Games made sure that the winter scenery of The Cut – the region of the world visited by Aloy in the expansion – looked as real as possible.

The snow realistically responds to contact, characters can leave their tracks in it, and the location design stuns with its beauty. If you’re aiming for a bit of fun in hyper-realistic snow, then Frozen Wilds is the title you should play.

If you’ve read Jack London’s To Build a Fire and thought that you would’ve survived longer than the stranded explorer of Yukon, then The Long Dark is a game just for you. The player is put in the shoes of a pilot who crash-landed in the middle of the Canadian wilderness. 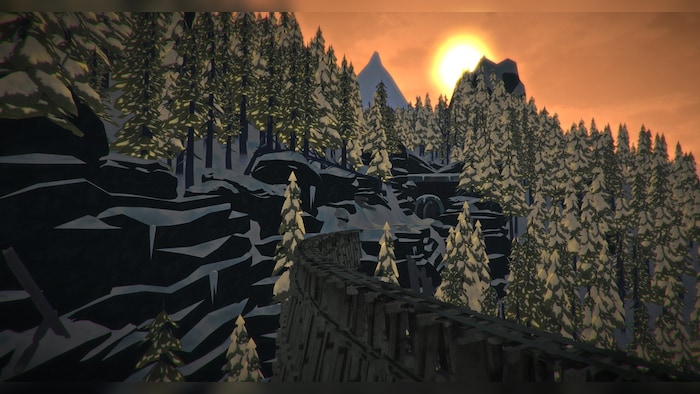 With little supplies available, the player must venture into the frozen wild to find the resources necessary to survive until the rescue arrives. If it arrives, that is.

Hinterland Studio’s game follows the pattern of many other “stat managers.” The player has to look after the protagonist’s hunger and thirst, provide them with warmth to prevent death from hypothermia, and many other factors. The player will also have to craft various items to help them survive in the wilds. Throughout the gameplay, the player will face the fauna of the land – deers, wolves, and bears among them. These animals will either provide a great source of food and resources or eat the player. You know, as wild animals tend to do.

Much likeThe Frozen Wilds mentioned above, Iceborne is a stand-alone expansion pack to Monster Hunter World that takes the player into an uncharted winter landscape to hunt more monsters. 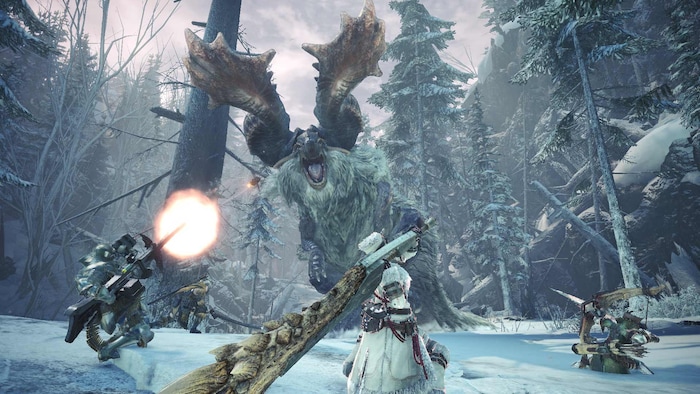 Hoarfrost Reach is an unforgiving land, where extreme weather conditions and perilous monsters will prove challenging even for the most experienced hunters. But those who survive its challenges will discover the majestic beauty of the land untouched by human intervention.

The most fun part of Iceborne is definitely the exploration of Hoarfrost Reach. Capcom’s designers did a great job of introducing a winter landscape to the world of Monster Hunter, filled with beautiful vistas and dangerous monsters lurking below the snowy surface or roaming the vast icy landscapes.

If the COVID-19 pandemic has ruined our winter break plans of skiing with friends, then maybe Steep will help you cope with that loss through virtual winter sports madness. 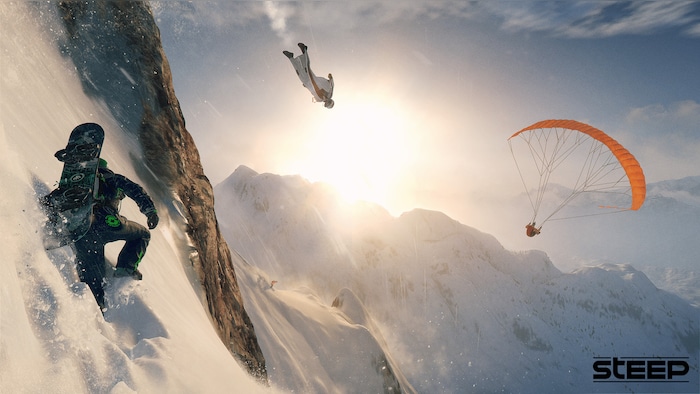 Ubisoft Annecy’s title gives the player a chance to test their skill on the slopes located in the most beautiful regions of the Alps. Try out various types of activities – including skiing, snowboarding, paragliding, and more.

In Steep, you can compete against your friends for the gold medals in a variety of different competitions or enjoy the energetic ride on faithfully recreated tracks. Nothing beats the boredom of being stuck at home like a surge of adrenaline from snowboarding down the side of Mont Blanc.

Rise of the Tomb Raider is the title in which the reinvented adventures of Lara Croft found their stride of a quasi-Uncharted action-adventure game. It also probably the most visually stunning title in the series s a whole. Still reeling from her harrowing experience on Yamatai, Lara searches for clues about her father’s obsession – the lost city of Kitezh hiding a mysterious relic said to provide its wielder with immortality. To find it, she travels to Siberia, where she encounters a long-forgotten civilization as well as a militant cult gaming to use the relic to take over the world.

The Rise of Tomb Raider plays similarly to the previous game in the series – Lara explores semi-open-world locations, solves puzzles, and fights enemies using various firearms. While proceeding through the game, the player can unlock different skills of young Lady Croft, divided into sections such as combat, crafting, and survival. All that in beautifully-rendered locations of Siberian wilds.

As you can probably tell from our list, there are a lot of games that take place during the winter. They represent a whole range of different genres, and playing them gives you a chance to participate in a variety of activities that involve snow, ice, and everything in between. Be it winter sports, winter fantasy worlds, or winter post-apocalyptic scenarios, you will definitely find something to spend time on while waiting for the next, hopefully, less isolated, wintertime.