We do love to occasionally have a good laugh, but what one finds funny doesn’t necessarily have to be funny for others. Some people laugh when they see a cat scared to death by a cucumber, and others laugh when their neighbor falls down and breaks his leg. We don’t like to openly admit that we like dark humor, but don’t worry – we won’t tell anyone.

There is a lot of humor in video games, but are there games known for their dark comedy, sarcasm or self-irony? Of course there are, from the top of the hat we can mention the Grand Theft Auto, Saints Row and The Sims video game franchises that have tons of funny easter eggs and funny in-game moments. In this article though, we would like to show you some funny games that are often overlooked or not fully appreciated for their comedic aspects.

The List of The Best Dark Comedy & Humor Sarcastic Games

The first game on the list is one that allows players to become the evil lord – it’s quite a refreshing experience, considering the fact, that usually we’re the ones to save the world.

Overlord is an action role-playing game where you will have the unique opportunity to command your very own horde of evil creatures from a first-person perspective in order to destroy all that’s good. It’s not scary but funny and it’s packed with dark yet light-hearted humor, hence it’s made its way onto the list.

What’s more, the game serves as a satire of the entire role-playing genre. For example, similarly to Fable, there is a corruption feature, except here rather than choosing between being good or bad, you’ll choose between being evil or really evil.

It’s probably not the first game that comes to mind when one thinks of dark comedy games, but it actually makes perfect sense.

In Surgeon Simulator you will be tasked with performing various surgical procedures. The thing is, it’s not the most accurate surgical experience, to say the least – and it doesn’t try to be. Imagine the following scenario.

You have to perform a heart transplant, but you’re entirely on your own. What’s more, instead of being in a properly prepared hospital, you’re in the back of a speeding ambulance, which causes everything, including your tools and your patient’s organs, to bounce around.

The patient is losing blood, his liver is missing, and soon he’ll faint, but it’s not enough to stop you. You throw away his ribs and lungs, who needs that anyway? And when you finally replace his heart, your job is complete and you get a comforting message: “Looks fine to me, I’m sure he’ll live”. That’s Surgeon Simulator.

Borderlands 2 in itself isn’t a particularly dark humor-heavy title, but there’s that one man, who often comments on your actions and he does so in a very specific way.

We’re of course talking about Handsome Jack, the game’s main antagonist who makes full use of every chance he gets to insult and taunt you as you play. His comments range from being neutral and rather harmless to some that are outright slapping you in the face and show you how much of a psychopath he really is. 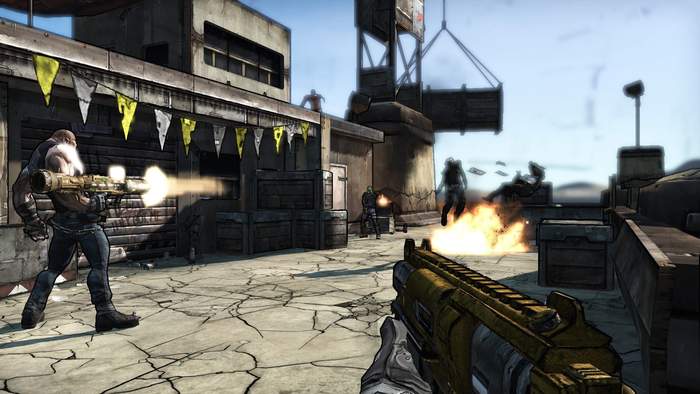 One time he tells the story of a man who rushed him with a spoon, so he scooped his eyeballs with it and found much pleasure in watching him blindly running around and bumping into things. And he hysterically laughs when he talks about it, which makes everything even darker and more bizarre.

There aren’t many games that allow players to play as aliens during an alien invasion, but there is Destroy All Humans!, and coincidentally, it fits the list just fine.

The title is played from a third-person perspective and lets you control one of the aliens during the ‘50s invasion. It can be considered one of the horror-comedy games, but it’s probably much scarier for helpless representatives of the human race you’ll often encounter throughout the game.

Destroy All Humans! combines action game with exploration and adds a bit of dark humor and appealing visuals to the mix. You’ll be able to scan people’s minds, disguise yourself as one of them, use powerful Zap-O-Matic to send them to the other world, and if things get out of hand, you’ll also be able to use your flying saucer to deal with these pesky humans from a safe distance.

The list of the best dark comedy games wouldn’t be complete without a title, where you can unzip your pants in public.

Postal 2 features a lot of dark but also lowbrow and childish humor, so it’s certainly not meant for everyone. It’s a game that makes fun of religions, political views, environmentalists, rednecks, and more. It’s a game that glorifies smoking, as it significantly boosts your health. It’s a game where you can shamelessly pee on other people in public. 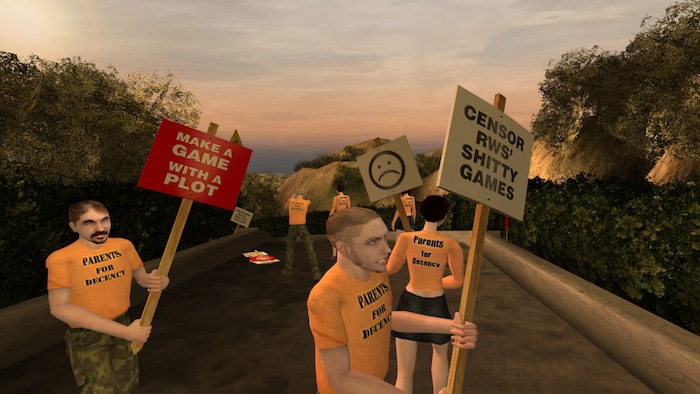 Different people enjoy different types of humor, but today’s list is dedicated to those who like their humor black just like their coffee. Check out the list above and enjoy some of the best dark humor games out there.