There are good games and bad games. But only one series has created an entire independent soulslike genre, describing the most challenging titles in the gaming world. And this story began with the release of Dark Souls.

Dark Souls by FromSoftware is the spiritual successor to 2009’s Demon’s Souls, developed by the same studio. It came in three parts – plus remasters and DLCs. But a year before the DS3 premiere, Hidetaka Miyazaki and his studio released another game – Bloodborne. Set in a completely different universe, telling a separate story and featuring new gameplay mechanics – but still almost identical. In this way, a soulsborne term came to life. But what does it mean? And how is Bloodborne different from Dark Souls? To learn all these differences between the two video games, continue reading this article. 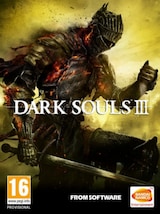 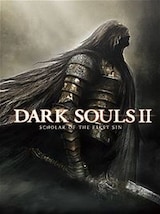 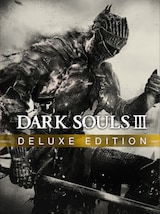 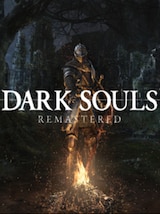 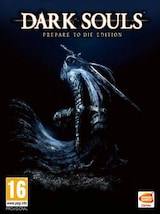 FromSoftware games are famous worldwide for their incredibly high difficulty level. These classic action RPGs are often associated with frequent dying and the most challenging bosses. So how hard are they? Bloodborne and Dark Souls are games where death happens all the time, but not more often than in FPS war games. The thing is that in these titles, dying has massive consequences for progress. The respawn point can be far away, and each death means the loss of collected souls (Dark Souls) or Blood Echoes (Bloodborne) and the revival of enemies in the area. You can only recover your lost gains by reaching the point of your death. Unfortunately, there is a possibility that your enemy has already picked up souls or echoes, and you will have to defeat him to collect them back. And if you die, your progress will vanish forever. 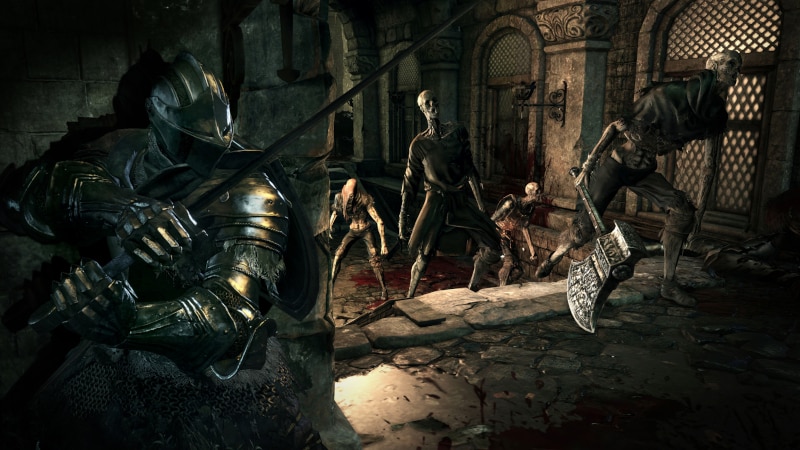 It is the complex nature of all the action games from FromSoftware. As you can see, the core of their difficulty is not easier dying but the process of repeating some actions. To win, you must repeat and become fully involved in the campaign. It is one of the many similarities, so what are the differences?

The world of Dark Souls is a medieval dark fantasy full of magic and grotesque creatures. In this gloomy reality, you will fight for survival, uncovering clues about its fall. Destroyed remains of castles, forgotten ruins, dark dungeons, and misty paths leading to the peaks of mysterious mountains are everywhere. And at every turn, you can encounter powerful enemies like the undead, rats, golems, demons, and much more. The locations are full of secrets and threats, so every step here can get you in trouble. 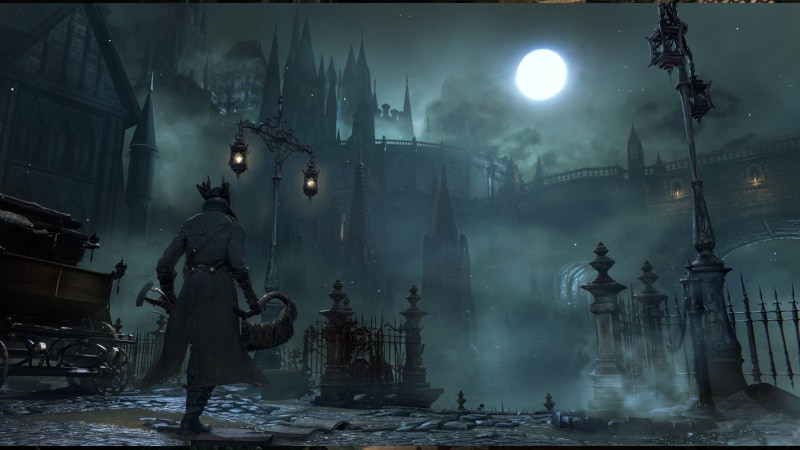 Bloodborne is also pure chaos and despair, but set in a slightly different reality. The action takes place in the city of Yharnam – occupied by a mysterious plague where everyone has gone mad or turned into grotesque creatures. It is a real treat for players who like the Victorian aesthetic, seasoned with a dose of misery and horror. Like Dark Souls, Bloodborne strongly refers to the works of H. P. Lovecraft. But does it much better, and subtle or direct references are everywhere. Therefore, it creates a world much more frightening and tricky to understand.

Starting a game, create your hero. In Dark Souls, you construct your dream character by choosing a name, gender, appearance, and class. Pick from professions like warrior, bandit, thief, sorcerer, and more. Each has a certain number of statistics points, but on your way, you can develop as you like. It means you can even create entirely new hybrids by combining different skills and using them in your favorite way.

Bloodborne offers fewer possibilities to build a hero. There are several classes, but you’ll always play as a hunter. Character development focuses on developing classic RPG stats, and your survival largely depends on your stamina and health. 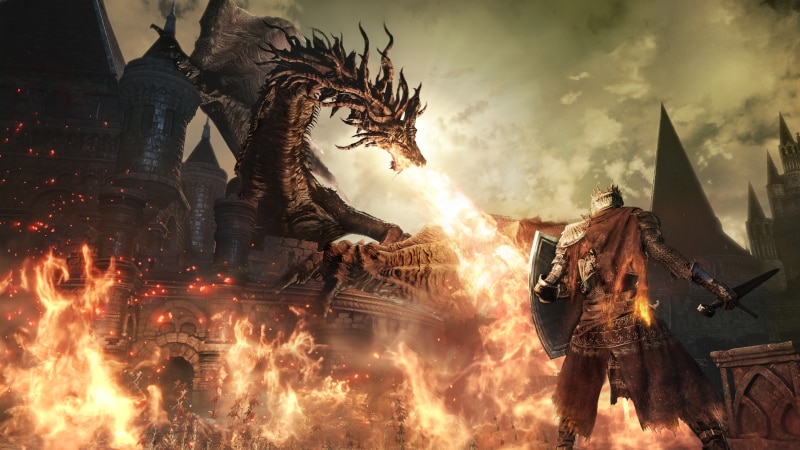 As players on Reddit say, the essential difference between the two games is the gameplay experience. Dark Souls is an epic adventure and the feeling of being small in a massive world of eternal threats and ghosts from the past. Everything is gigantic, legendary, and has its roots in something that existed in the past. Bloodborne has an entirely different approach to the gameplay, showing the events taking place now. Everything in the city is happening now: plague, monsters, setting, and every encounter. But these differences have one thing in common – the story. In neither of these games, anything is explained, described, or explicitly shown to the player. To understand the situation, you have to lose yourself in exploring and discovering more, often confusing, scraps of history.

Combat plays a vital role in both games and features some differences. But the weapons are the most fun! In Dark Souls, you will discover a rich arsenal of classic medieval weapons equipped with various powers. You can enjoy swords and axes and blunt or ranged weapons. Each has epic properties that make the entire gameplay ultimately satisfying. You’ll also find better gear in DS and benefit from more powerful armor than in Bloodborne. But the spiritual successor to Dark Souls also has something to offer by introducing guns. You can use swords or spears and shoot the effective Gatling Gun simultaneously. There is a lot to choose from, which is good because Bloodborne also means a faster pace of combat and a slightly higher difficulty level. While in Dark Souls, you can enjoy a complex combat system requiring an appropriate strategy – Bloodborne is the definition of fast-paced action. For this reason, guns work perfectly as a highlight of the Victorian setting and an excellent weapon during spectacularly dynamic battles.

During your journey, you will encounter hundreds of enemies and mighty bosses. But before deciding which of the two games you want to play, decide which fighting style suits you best. In Dark Souls, you will meet many ancient creatures waiting for your fall. Deadly and powerful Bosses have some surprising attacks up their sleeve. But each of them follows a pattern that, after a few repeats, you can try to understand. So every fight requires developing a strategy. 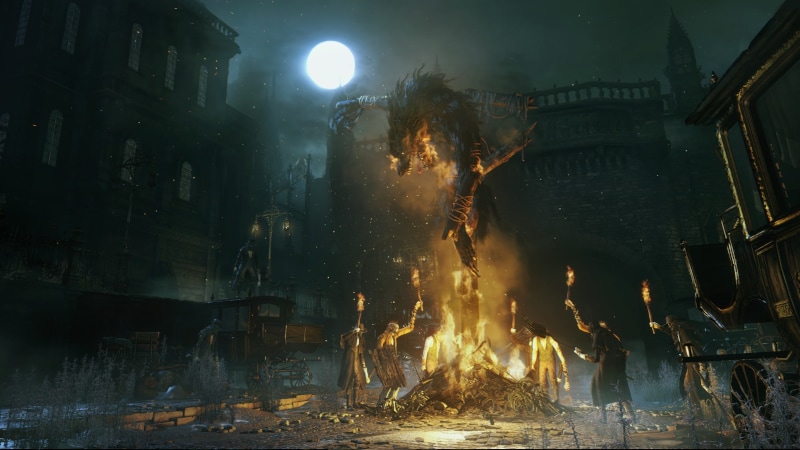 In Bloodborne, all bosses’ designs are exceptional and much better than in Dark Souls. Coupled with the Lovecraft inspiration, each encounter is a truly terrifying experience. Especially since the bosses in this game have absolutely no attack pattern – their actions are random, unpredictable, and highly brutal. Everything happens very quickly and often in small spaces, so you may not have much room at your disposal. And that makes Bloodborne much more challenging than Dark Souls.

But fear not. You can use help during boss battles – Dark Souls and Bloodborne feature a legendary support system for other heroes. When exploring the world, you can often stumble upon messages left by other players or even replay the scenes of their deaths. It is very enlightening and helpful, especially since you may find yourself in a similar situation at any time.

Each game focuses on a lone journey through a single-player campaign, and this playstyle should be your goal. But sometimes, things can get too risky, and that’s perfectly understandable. To send for help, you put the summon sign in Dark Souls and ring the bell in Bloodborne. To complete this action, spend some currency or get a particular item. In Bloodborne, you need Insight points to play in multiplayer – a mysterious stat that lets you have fun together. But also helps see more horrors of the surrounding world. 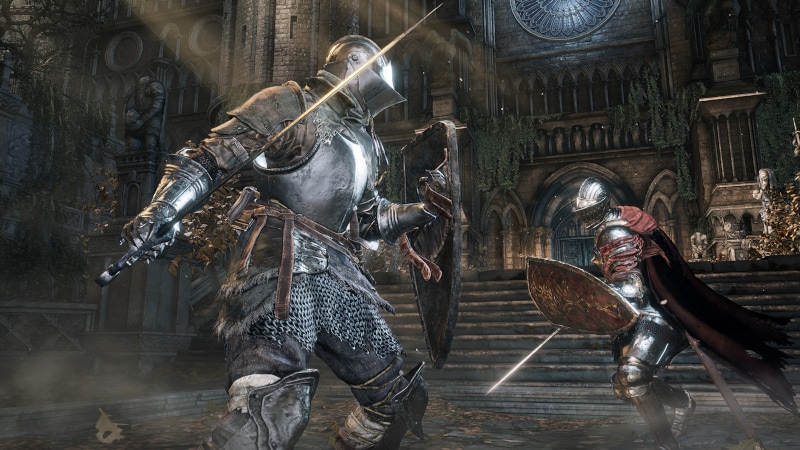 Both games are challenging titles where you die multiple times to understand your destiny. Or the lack of it. But Bloodborne is a bit better. In its case, the studio took the best Dark Souls mechanics and improved them even further, creating something truly epic. The combat is faster, the world is darker, the bosses’ graphics are better, and the multiplayer mechanics allow even more fun. However, this is only one game with no sequel, so fans will have to enjoy a limited number of gameplay hours.

Dark Souls is something for people with great patience and willpower. It’s a pure classic, a legend in the gaming world, and a gameplay experience for players that aren’t easy to break. The combat is slower, but it requires a strategy. Death has tragic consequences, and the surrounding world is a vision of the civilization collapsed and devoided any hope. Dark Souls is also about continuous learning by repeating the same mistakes. No wonder this mystery-filled title has built such a loyal fan community worldwide. But whatever you choose, remember – these games require commitment and the right mindset. Because without them, any progress is impossible.