G2A.COM  G2A News Features What we can expect from Darksiders 3.

Darksiders is a series of games that I am personally very fond of as it tends to hit all my right spots: a silly fantasy story, fast and engaging combat, great visual style and fantastic level design. These 4 qualities come together to create a very fulfilling experience. They can be found in both Darksiders games and they’ll most certainly be the defining elements of the upcoming Darksiders 3.

But today’s is conflict piece! We’ll be talking about which game executed these concepts better and how design ideas unique to each game influenced them, for better or worse. And maybe we can even glean some insight into what we can expect from Darksiders 3.

On story and its elements.

Starting with something easy we have the story. Both Darksiders 1 and Darksiders 2 do similar things, but there are important key difference. War’s story in Darksiders 1 is at its core actually a mystery thriller—War has to discover the secret behind his untimely summoning and regain his honor. On the other hand, Death’s story is a straight-forward hero’s journey—Death gets his call to action by the virtue of his brother being tricked and betrayed and undertakes a journey that takes him through an actual Underworld in order to attain the literal elixir that will resurrect humanity. You really can’t get more Joseph Campbell than that.

While Death’s story being a hero’s journey is inherently more interesting and maybe more importantly: more fitting for the genre these games are in, and despite the fact that Death with his dry wit as a character is just more entertaining and nuanced than War, Darksiders 2 makes a design choice that surprisingly enough makes Darksiders 1 more engaging.

And that unfortunate design choice is padding. Darksiders 2 can, at times, just get flat-out boring. Long segments of the Underworld’s wastes that have to be traversed several times on horseback is a place where a lot of players just stop playing the game. An argument could be made that this serves the narrative in a meta-textual way, after all it’s the Underworld, it’s supposed to evoke the idea of souls being trapped in an endless struggle, but that’s not bloody fun is it? And if your audience isn’t having fun, they won’t stick till the end and then it doesn’t matter what you were trying to say.

There’s also an issue of Darksiders 2 having a rather sparse cast of support characters that are essentially landlocked inside their own segments of the game. While the Crowfather serves his role as the archetypal goddess well enough, Darksiders 1 simply has more fun characters and having War interact with the Watcher, Uriel or Ulthane is just more engaging. Despite Death being a better-written character, he just isn’t allowed to shine.

It’s interesting to note here that Darksiders 3 seems to go back to the roots on this with Fury’s story being all about discovering the bigger picture and learning a valuable lesson about the importance of her family. She even has a Watcher of her own, but the dynamic of these two seems very different than what we saw in Darksiders 1 so this is sure to be interesting.

After War comes Death—combat in Darksiders.

Both games take their combat engine very seriously and utilize tried and tested solution of action RPGs past with complex combos, reliance on dodge and block mechanics, big flashy special abilities serving as finishers or panic options and the iconic transformation to the true form of the currently featured Horseman measured by a special gauge that will fill up by you killing enemies and causes huge devastation when unleashed.

Darksiders 1 uses a system known from games like Devil may Cry, whereby you simply obtain new moves, new weapons, and weapon upgrades throughout the game as well as some new flashy Wrath Abilities like the powerful Blade Geyser. While these can be upgraded, they are disconnected from each other without actual progression and there’s a certain lack of variety here and you will naturally gravitate towards certain better options. Like the Blade Geyser, because it’s that good. 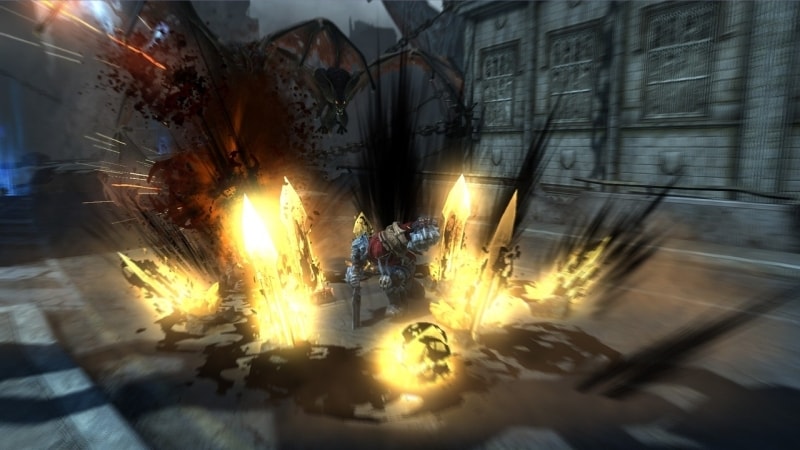 On the other hand Darksiders 2 features an extensive character progression system with levels and 2 separate skill-trees. The abilities are varied, fun, and offer unique playstyles that have upsides and downsides without any one being clearly the best. Darksiders 2 combat is also more fluid and the ability to collect health potions adds an extra layer of management. It’s frankly better executed and more fun.

Additionally the system of randomly generated loot with degrees of Rarity, various special and unique abilities working in tandem with your playstyle and the introduction of Possessed Weapons which can grow in power by you disenchanting the items gathered in copious amounts makes exploration and optional puzzles that much more rewarding.

While game purists will tell you that this departure from the original injects an element of grinding, it really doesn’t, it just makes the game more varied and more worthwhile to replay. That said, it’s hard to say where Darksiders 3 will go with this. Whether the game will feature an extensive character progression of Darksiders 2 or the simple charm of Darksiders 1 remains to be seen, although with the rumors of crafting being a thing in Darksiders 3, Nordic will likely expand on what they did in Darksiders 2.

A matter of style.

The aesthetic of Darksiders is one of the elements the series is consistently praised for and with good reasons. The comic book style is striking and original. The bulky design of War and the design of various opponents is just cool and the bosses are fantastic, further enhanced by clever approach to the design of combat, incorporating elements of previously solved puzzles.

It’s undeniable though that Darksiders 2 is just a clear cut upgrade from Darksiders 1. The presentation of the Undead King’s ship flying by being anchored to two gigantic airborne serpents eclipses anything we see in Darksiders 1 (even though the design of the final boss comes damn near close). While the style of Darksiders 1 is great it seems subdued in comparison to 2. THQ simply now had the leeway to throw in ALL the ideas they had and the game benefited greatly for it. 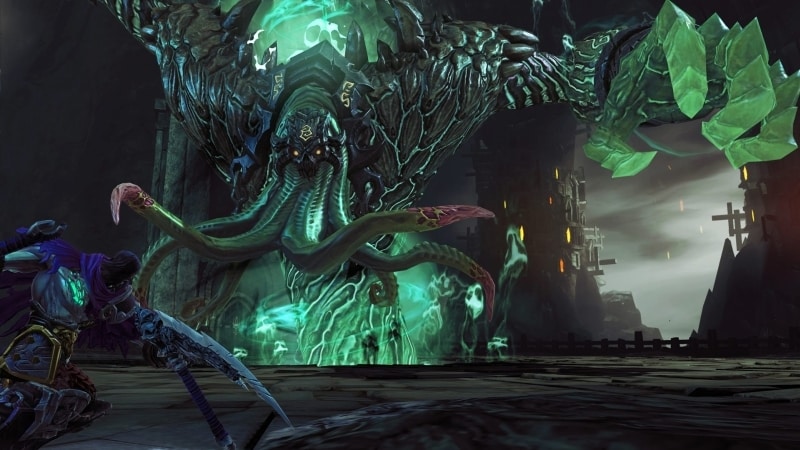 Tragedy for the ages.

Now the key aspect of this is the work of one Joe Mad, a comic book artist who designed the most iconic elements of both games and was in charge of general art direction. He very much was the Darksiders guy. I’m saying was, because here’s the stinger—Madueira no longer holds this position and isn’t in for Darksiders 3.

And this is a big point of contention. The early trailers for Darksiders 3 as you maybe realized seem… Off. Well that’s because Mad isn’t here anymore. With the more recent material we can see that the developers attempted to remain as close to the man’s style as possible (the design of the Hollow King for example is fantastic), but there’s just no copying an artist’s style in totality.

Personally I remain hopeful because Nordic was always very particular about their art direction and I know they hired great artists to make sure the game’s feel remains the same and who knows, maybe these small differences will end up being an endearing trait of Darksiders 3. Maybe they will let us appreciate the work of the artists, and Mad’s work by extension, even more. But it’s fully understandable to be concerned on this one. 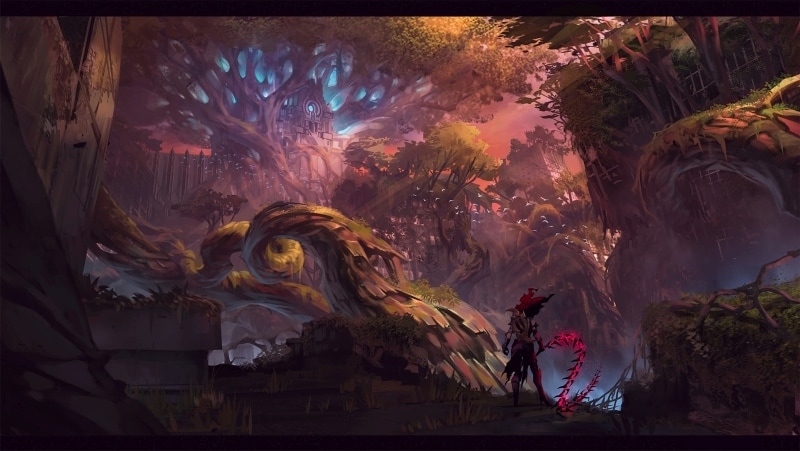 Literally the most important aspect to game design.

Devil may Cry. Dust: an Elysian Tale. Half Life 2. Dark Souls. Resident Evil and many more. What do these very different games have in common? You maybe guessed it—excellent level design! Designing an environment for the player to explore is the KEY aspect of good game design. Your level needs to be communicative, thematically coherent, geographically comprehensible and visually striking.

Legend says Miyazaki lays down every single pebble and every brick in every wall by his own hands when he sits down to design Souls and while it’s obviously facetious, the importance of good level design cannot be understated. And this is also a key aspect of Darksiders games which are often compared to Zelda games with their approach to puzzles and environmental storytelling.

There’s an almost Metroid-esque approach to design in Darksiders, everything is not only intricately connected, but the various puzzles serve as a big and visible landmarks, conveying information to the player perfectly. They need to, because if they can’t do that, you as a player would simply fail to progress.

Why it being longer doesn’t necessarily matter.

And this is where Darksiders 2 fails. Yes, there’s much more variety to the puzzles, yes they are even more interesting when they are good, but the sheer quantity of those leads to fatigue. The large expansive areas you have to traverse on horseback don’t help and just make you reluctant to backtrack and that’s a real shame because sometimes it’s very much worth it.

What also doesn’t help is the fact that the last level of Darksiders 2 taking place in the Heavens is just obtuse when it comes to relying information to the player. It legitimately got me annoyed to the point of resorting to a video guide, because I was just not having any of that. In contrast Darksiders 1 is shorter but is compact, backtracking doesn’t take ages and for the most part you can remember where everything you left behind was.

But thankfully, seemingly the developers realized that and went back to the design choices of Darksiders 1. Now part of it is of course that THQ went belly up and just did not have the resources they used to have when they were working on 2, but it may be something of a blessing in disguise. Other than that from what we’ve seen the trend of clever design continues.

Interestingly, in Darksiders 1 and 2 puzzles were always solvable with a singular approach (baring exploits and undesirable exceptions), but in Darksiders 3 this doesn’t seem to be the case. As we saw in one of the teasers, Fury is able to solve some puzzles using multiple different approaches. This both makes the process of design itself harder because the levels need to convey even more information, but at the same time easier, because you may just want to ignore optional puzzles and come back with abilities allowing you to just power through.

So which one is better?

Well it seems that it’s a draw This is anticlimactic but honestly, it’s to be expected, isn’t it? A lot of it comes down to personal preferences in the end—I definitely think Darksiders 1 is the more compressed experience but when I think of singular moments of greatness defining the series I immediately remember Darksiders 2’s moments more. And I recently played the Warmastered Edition so that one is freshly in my memory and yet I still go back to 2.

But all this means is that Darksiders 3 might be the best of both worlds. There’s a clear evolution to the series and if Nordic manages to combine the good of both games and minimize the bad, this might be our golden middle of Darksiders and a truly fantastic game.