How to get the World Quest weapons: the MIDA Mini-Tool, the MIDA Multi-Tool, the Rat King and the Sturm and Drang

Destiny 2 can be a tough game without the proper equipment. Instead of just running about and trying to get the best possible loot from random enemies, it’s a generally a better idea to choose a weapon you want to get and then complete the associated conditions. This is where the World Quests for each of the Destination, come in.

A good sidearm is hard to find and some players underestimate the importance of this type of weapon. The Rat King is an Exotic Kinetic Weapon that becomes more powerful, the more Fireteam members equip it, so it’s great for Raids and co-operative play. This effect stacks up to 6 times. Additionally, the Rat King can be equipped with the following perks: 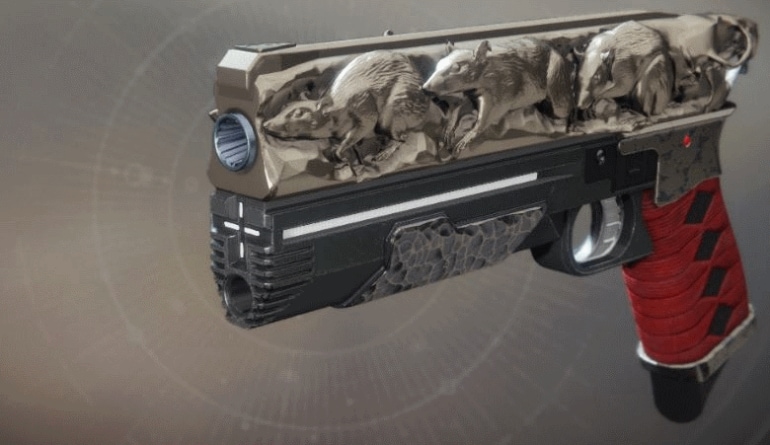 In order to obtain the Rat King the player must have completed the main story missions and the “Enemy of My Enemy” mission from Titan, acquired after talking to Sloane. Completing the quest grants you the Rat King Crew item into your Kinetic Weapon slot, which in turn gives access to a series of “riddles” that need to be solved to transform the item into the weapon. There are two additional conditions for the “riddles”: there needs to be at least one additional player in the Fireteam with the Rat King Crew item and the riddles need to be completed in a specific order. The solutions to these are: First riddle: Complete 2 Patrol Missions Second riddle: Complete 2 Public Events Third riddle: Complete 2 Crucible matches. You can either win or lose, it does not matter Fourth riddle: Complete the weekly Nightfall Strike with at least 5 minutes to spare

The MIDA Mini-Tool and Multi-Tool

This is probably the best combination of weapons in the game, so it’s a good idea to know how to get them. The Mini-Tool is an excellent Legendary SMG for the Energy Weapon slot. The Multi-Tool is an Exotic Scout Rifle for the Kinetic Weapon slot. What’s important that equipping both weapons at the same time grants the player additional buffs.

The player needs to be at least at level 20. All of the main story missions must have been completed. Go to the European Dead Zone, talk to Devrim Kay and accept the “Enhance!” mission Complete the mission objectives, return to Devrim Kay and enjoy the versatile SMG 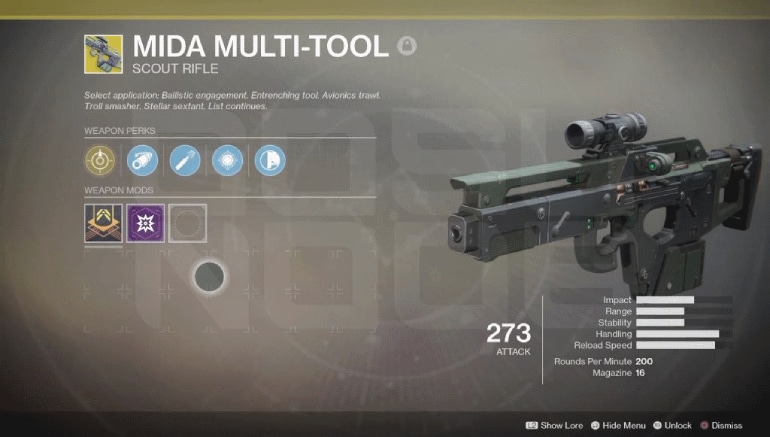 Corkscrew Rifling – The weapon’s balanced barrel slightly increases range, stability and handling speed High Caliber Rounds – The weapon knocks back the target a bit farther and the range is slightly increased MIDA Radar – The radar is active while aiming down the sights Hand-Laid Stock – Increased stability.

Obtain the MIDA Mini-Tool (see above) Talk to Banshee-44 in the Tower Complete the Under the Hood quest by dismantling 5 Legendary or Rare Scout Rifles Complete The Fall Will Kill You quest by getting 50 airborne SMG kills Complete the Sight, Shoot, Repeat. Acquire 50 Precision Kills and 25 Multi Kills without reloading your Scout Rifle. Return to Banshee-44

Drang is a Legendary Sidearm for all classes. Obtaining it opens up the way for getting the Sturm, an Exotic Heavy Cannon for the Primary slot. Getting the set is not that easy and will take you at least an hour or so, but it is worth it.

Adaptive frame – Reliable and sturdy grip Smallbore – A dual strength barrel that increases range and stability Extended Mag – The gun reloads slower, but the magazine size is greatly increased Together Forever – Killing with this weapon fills the Sturm’s magazine 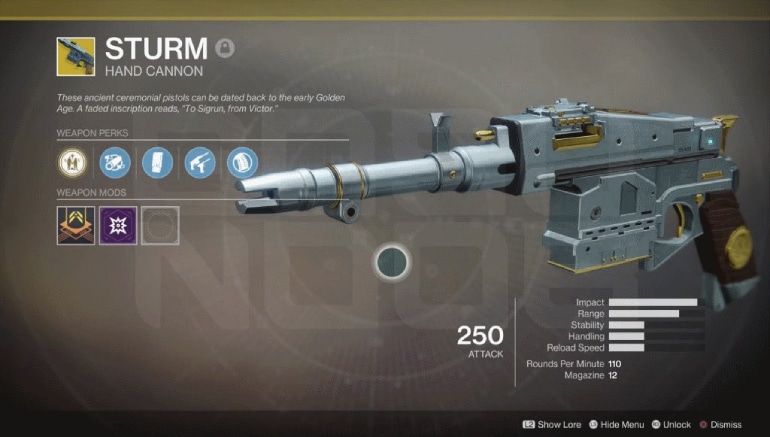 How to get them:

In order to obtain the Drang, the player needs to reach the 20 level and complete the “Exodus Black” missions. After the last mission, “My Captain,” is completed, the player will receive the Drang. Travel to the Tower to talk to the Cryptarch to receive the Relics of the Golden Age quest item.