G2A.COM  G2A News Features Dishonored 2: Corvo Vs. Emily – Which is the best? Who Should I Choose?

Dishonored 2 introduced many modifications to the gameplay known from the first part, improving the visuals and AI of enemies. But it also left us with the most challenging choice in the series – who to play as?

Corvo Attano from the first Dishonored is one of the most beloved male characters in gaming history. He is fast, sneaky, and somehow even handsome. But Dishonored 2 introduces one more character to play – Emily Kaldwin herself. And that’s where things get tricky because the entire single-player adventure can only be completed with one of these protagonists. So who is better to play this story? And whose powers will you like more? To help you make this tough decision, we decided to reveal their most significant features in the Dishonored 2 Corvo or Emily comparison!

Who’s better for the story?

Dishonored 2 is a direct continuation of the extraordinary adventures of both heroes, taking place over ten years after the previous events. Corvo saved the girl and cleared his name to become the new Lord Protector for Emily Kaldwin – who happened to be his biological daughter. But the evil Delilah deprives Emily of her power, and the heroes must journey to the city of Karnak to restore the heir to her throne. Or at least one embarks on an adventure, and the other stays in Dunwall. It is a fantastic occasion to discover the rest of the silent hero’s secrets, who will return to his hometown and reveal the details of his past. But you can skip the Corvo gameplay and focus on discovering Emily’s fate.

The female protagonist is fifteen years older and has become an exceptionally dangerous assassin specializing in stealth. Thanks to the Outsider’s Mark, she can also use various magical abilities. And let us tell you, it’s always fascinating to see the country through the eyes of a ruler living among her subjects. So if the story is the most vital matter for you when choosing a game, ask yourself a question. Do I want to see the continuation of my favorite hero’s fate from the previous game or experience a completely new adventure? 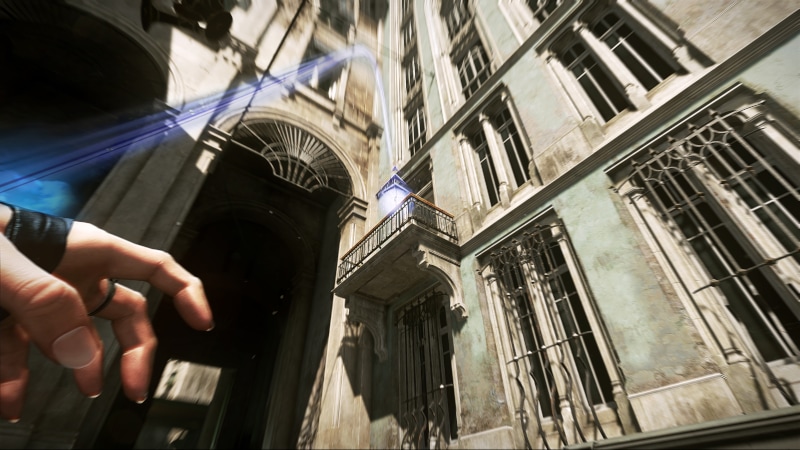 Playing Corvo is like coming home – an improved home. The protagonist still possesses the same powers as in the first game but in a slightly enhanced version. Emily’s abilities are something entirely else. By choosing this heroine, you will travel to an unfamiliar city and enjoy completely new powers by learning the story from her perspective. So if individual character abilities seem crucial and help you decide what playstyle you prefer, let’s move on to Emily and Corvo’s powers. 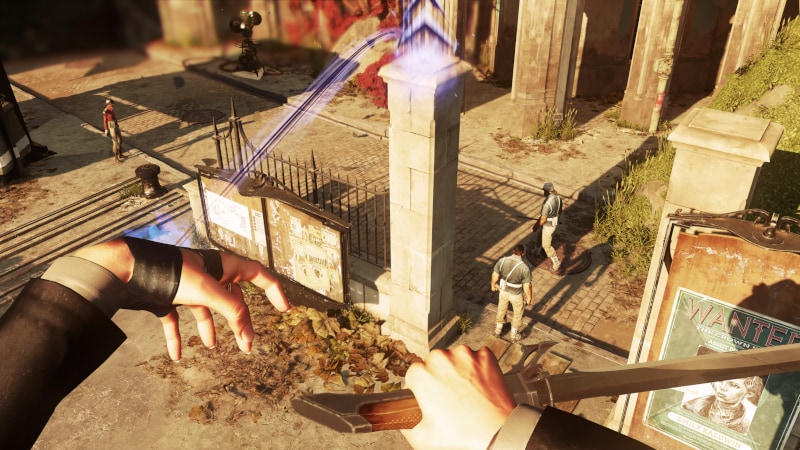 As Corvo, you will gain access to a handy skill called Blink. It’s a quick move to the desired location, which, combined with other skills, can work as a way to escape or attack an opponent by surprise. Both Corvo and Emily also share Dark Vision power. It lets the heroes see through walls to target enemies and boosted – predict their next move. Corvo’s most important power is Bend Time, which allows him to slow down or pause time. It’s quite an expensive skill but can prove priceless in moments of necessary sneaking between enemies or during extremely challenging combat.

The protagonist can also summon Devouring Swarm – a pack of rats that will attack any chosen target. It is ideal for wreaking havoc among groups of enemies, and upgraded enables the creation of two such groups of rats or makes them follow the hero. There is also a Windblast skill which acts as an invisible shield to reflect attacks and gain time for healing or other actions.

Corvo’s last power is Possession, which lets the hero take over the body of an animal or an NPC. It uses quite a lot of magical energy but is definitely worth it. 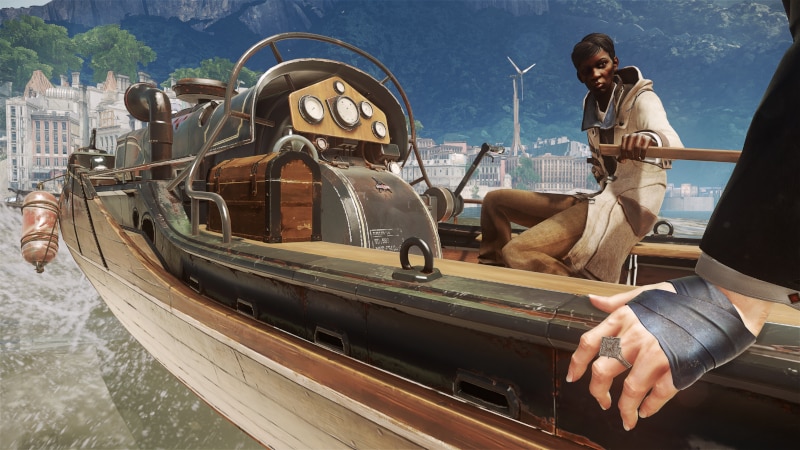 Emily’s powers are a delicious breath of fresh air in familiar gameplay. Aside from sharing Dark Vision with Corvo, she receives an accurate replica of Blink – a Far Reach skill. Known from trailers, it involves pulling a shadowy tendril out into the distance, which the heroine can use to drag herself to a target or draw targets to herself. Unlike Corvo’s powers, Far Reach is not invisible, but parkour and Spider-man fans will probably love it.

Another ability is Doppelganger – creating a clone. It’s perfect for confusing enemies since Emily can switch places with the twin. A fascinating power is Mesmerize, which is the summoning of a Void spirit to distract everyone around. So you can safely sneak behind your enemies, who will be too busy staring blankly at nothing. There is also something for fans of eliminating more enemies at once – Domino. This strange power combines the fate of up to four adversaries, and an attack on one will end with the same effect on the others.

Emily’s last ability is Shadow Walk – turning into a shade to safely sneak past enemies and even eliminate them in this form. 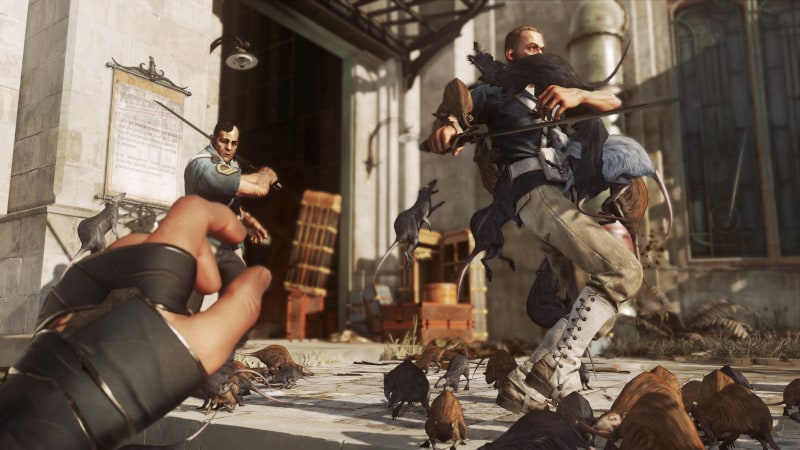 As you can see, Corvo’s powers focus much more on aggressive combat, while Emily mainly has stealth skills. Of course, you can adapt your favorite fighting style to the character of your choice and play Emily more directly and Corvo stealthily. But to draw the essence of their unique capabilities, it’s best to use this ready-made potential and play as the creators intended.

Corvo vs. Emily – which to play?

If you’re planning to play Dishonored for the first time, definitely pick Emily. The whole story is perfectly tailored to her character, making her more canon. This choice is a natural continuation of the plot from the first part – even the trailer focuses mainly on her. Moreover, she is related to the Delilah character, which makes her story more personal, logical, and relevant. 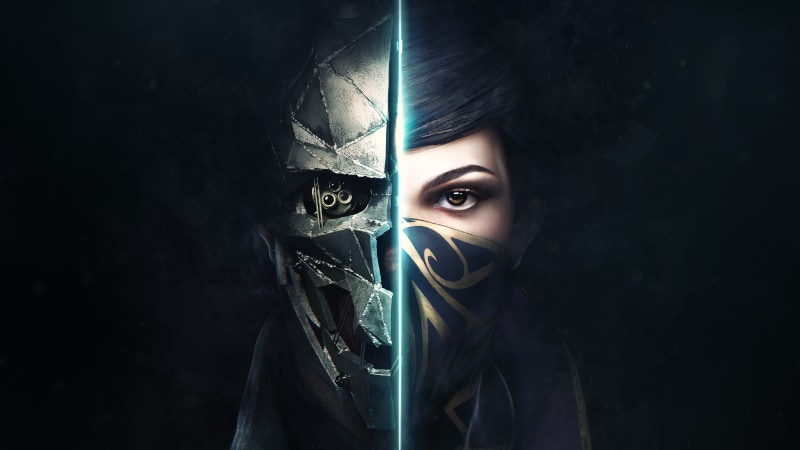 Corvo is the perfect character to replay this game – he feels more like a pleasant addition for players curious to see how his future develops. So you can play the same game a second time, but in a slightly different way, and discover extra details about your favorite hero in the process. His powers are easier to master, especially for those who played the first Dishonored. You can expect thrilling gameplay to experiment with and explore fascinating additional details, which will prove as a perfect conclusion to the story of both characters.