Persona 5 is the latest installment of the long-running series of role-playing games developed by Atlus. While telling a different story, each game in the series shares the core gameplay mechanics – a combination of turn-based role-playing combat and elements of visual novel storytelling.

Having been around since 1996, the Persona video game series has managed to gain a massive following and no small amount of games that would try to replicate its success. These games are what this article is all about. We’ll focus here on the ten best games like Persona 5, taking into account their gameplay features and story.

Shin Megami Tensei III: Nocturne HD is a role-playing game developed by the same studio as Persona 5. In the game, the player team up with a group of survivors in a post-apocalyptic Tokyo and must take on monsters roaming the streets and discover the causes behind the current state of the world.

Nocturne HD is the third game in the Shin Megami Tensei series, of which Persona games are a spin-off. The game features many of the mechanics the fans of the Persona series will immediately recognize – turn-based combat in which the player sends his demonic minions into battle; expansive story featuring dialogue trees and character-based interactions.

All of these features are present both in Nocturne HD and Persona 5. A unique feature of Nocturne is the Negotiation system, where the player must convince the demon opponent to join their team. If that’s something that floats your boat, then go ahead and try it out. Shin Megami Tensei III: Nocturne was met with positive critical reception.

Persona 4 Golden is an upgraded, expanded version of the fourth installment of Atlus’ flagship series. Yu Narukami arrives in the countryside town of Inaba, where a series of mysterious murders prompts him and his classmates to investigate the urban legend of a Midnight Channel – a portal to another world accessible through a TV – and its connection to the Midnight Channel.

Persona 4 Golden expands on the original plot of the game, adding in the character of Marie, a mysterious young woman the protagonist meets after arriving in Inaba. The game mechanics remain unchanged compared to the original game, with new additions being social links the player can build with Marie and Tohru Adachi, several new personas added to the roster, new outfits, and cutscenes, etc.

If you haven’t played the original game yet, you might want to start with this expanded version. Persona 4 Golden was met with a solid critical reception and was responsible for a significant surge in the sales of PlayStation Vita consoles.

Danganronpa: Trigger Happy Havoc is set in a mysterious Hope Peak Academy where a group of students finds themselves prisoners of Monochrome Bear – a host of a sadistic TV show. The students are tasked with identifying a murderer amongst them through a series of tests and trials. 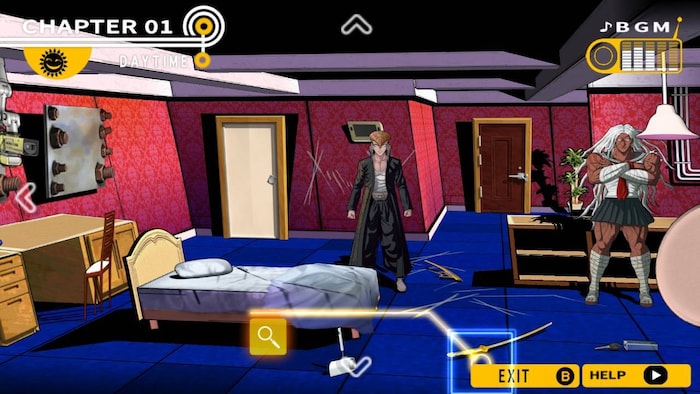 As the students – the brightest and most talented minds in the region, except for one average high-schooler – give in to suspicion and paranoia, Monochrome Bear’s plan begins to unfold.

Trigger Happy Havoc is a visual novel with elements of an adventure game, in which the player passively clicks through dialogues and examines items found in various places to see if they can provide information on the identity of the murderer. Fairly straightforward, one could say, but they’d be wrong. Locating clues and talking to other students is necessary to pass the Class Trial section of each level, in which the player uses collected data to interrogate potential culprits.

Class Trials feature shooter game mechanics, including shooting “evidence bullets” at false statements in Non-Stop Debate or shooting down letters spelling out the clue in Hangman’s Gambit. These elements and more make Class Trials the main appeal of Danganronpa and something that the players of Persona 5, used to intense battles (not necessarily of wits), will definitely enjoy. Trigger Happy Havoc was met with positive reviews, in which critics praised the narrative of the game and gameplay mechanics of Class Trials.

Tokyo Xanadu eX takes the player to the titular city of Tokyo, where a massive earthquake had caused damage that took nearly ten years to rebuild from. Kou Tokisaka notices his classmate Asuka Hiiragi accosted by some shady types.

After following them, Kou is sucked into a vortex, ending up in Eclipse – a nightmare realm. He is approached by Asuka, a member of a group called Nemesis, who asks him to help with closing the vortexes and saving the city.

Tokyo Xanadu’s similarities to Persona games can be found in both storytelling and some of the mechanics. The player controls a high-school student imbued with special powers, exploring a nightmarish version of Tokyo. The setting and dungeon-crawling features of this action-RPG will definitely sound familiar to the fans of Atlus’ series. While the gameplay is definitely more action-oriented and less tactical than in Persona 5, it shouldn’t dissuade those who want to experience a decent Persona-like title. Tokyo Xanadu eX was met with a positive critical reception.

Final Fantasy XV is the latest chronological installment of the classic Square Enix series (FF7 remake doesn’t count because it’s, well, a remake). The game invites the player to the world of Eos, where technology and magic meet j-pop boyband aesthetics.

The protagonist of the game is young prince Noctis, whose royal father is murdered, and his bride-to-be and himself are believed to be dead. Together with his friends, Noctis embarks on a quest to avenge his father and find out who attacked his kingdom and why.

Fans of Persona 5 will find themselves right at home with Final Fantasy XV, mostly thanks to its gameplay mechanics. The Active Cross Battle system, allowing the player to switch between commands with a press of a button making the battles fast and exciting. The game is set in a semi-open world environment, with sprawling plains and dungeon areas. FFXV gives the player a few transportation methods, including the classic Chocobos and the Regalia, an exquisite car of the player’s party. Final Fantasy XV was met with a positive critical reception and praised for its visuals and plot.

In Shining Resonance Refrain, an HD remake of the Japanese-only installment of the long-running Shining series, the player takes the role of Yuma Ilvern, a young hero bestowed with the soul of Shining Dragon, who joins the fight against the Empire to protect the kingdom of Astoria.

Together with his friends, Sonia Blanche and Kirika Towe Alma, Yuma will use his powers to help those in need.

Shining Resonance Refrain offers similar gameplay mechanics like those in Persona 5, except for using a familiar to fight the battles for the player. The game features the mechanics of building relationships between the player and the members of their party, which may result in love blossoming among certain characters. Shining Resonance Refrain was met with solid reviews.

The Legend of Heroes: Trails of Cold Steel

Set in the Erebonina Empire, Trails of Cold Steel tells the story of Rean Schwarzer, a student at Thors Military Academy assigned to Class VII – a unit consisting of both low-born and aristocrat students. 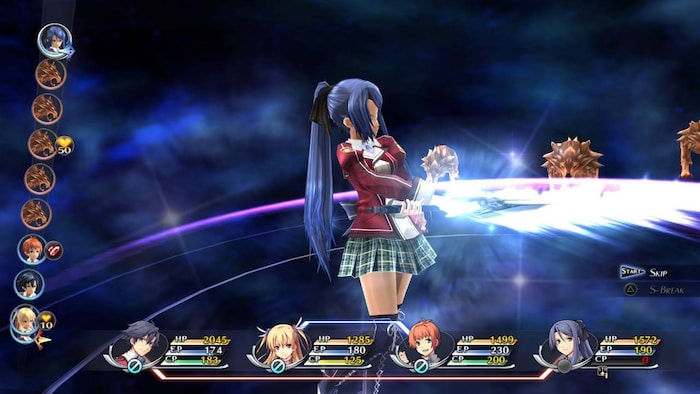 As he makes friends with commoners and nobles alike, spending days carrying out school assignments, Rean is unaware that soon he will become the pawn in a game between forces stronger than he could ever imagine.

Trails of Cold Steel improves on the gameplay mechanics of the previous game in the series, Trails in the Sky. The first thing the players will notice is the Tactic Link system, which allows dealing additional damage to opponents struck during the players’ turn. The system also speeds up the selection of commands. A free camera allows the player a better view of the battlefield or the areas in the overworld. While walking through towns, the player will be able to listen in on the conversations, thanks to added NPC dialogue lines.

The Legend of Heroes: Trails of Cold Steel

After years of games unreleased in the west, the fans of the Digimon can finally rejoice. Digmon Story: Cyber Sleuth delivers on all the fronts important to the fans of the digital monsters, offering a large roster of creatures to collect and an intriguing story of mysterious cyberspace called EDEN and dangerous hackers trying to steal its secrets, threatening both human and digital world.

Cyber Sleuth follows in the footsteps of the previous Digimon-related games, mostly the Digimon World series. In the game, the player can control two Digital Monsters, using them to fight against others in turn-based RPG battles. The game features 249 Digimon that the player can train and level up. Those who had played the previous games set in the digital world will definitely enjoy this blast from the past. The game will also bring lots of fun to the fans of role-playing games, like the Persona series.

Digimon Story: Cyber Sleuth was met with a positive reception – critics praised the mechanics and story of the game as the nostalgic feel of the title.

For the fans of the classic jRPGs, Dragon Quest XI – Definitive Edition should be a “definitive” choice. Not only does the game offer a range variety of nostalgic features, but it’s also considered as one of the best titles in the series. 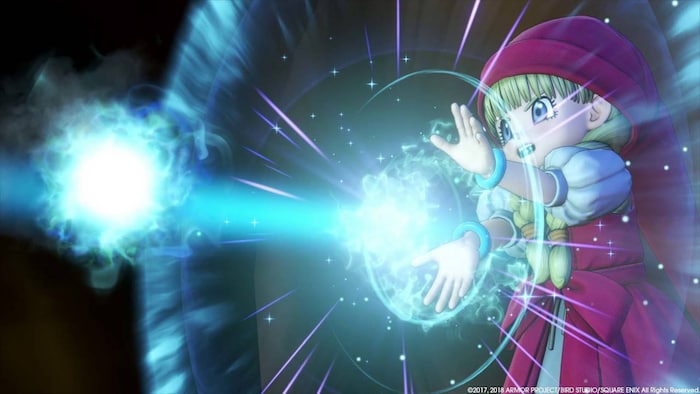 The story of the nameless young hero fighting to avenge his fallen kingdom is full of gripping moments and sudden twists – something that fans of Pesona 5 should welcome with open arms.

The gameplay of DQ XI remains similar to that of the previous many installments of this long-running series. The player controls the protagonist in the overworld, exploring it in search of useful items and accepting quests from NPCs. In combat, the player can rely on the help of their party members, dushing out physical and magical attacks. As we mentioned before, Dragon Quest XI is a real trip down the memory lane – one of its modes allows the player to change the display from 3D-rendered to 8-bit graphics of the old Dragon Quest titles.

Dragon Quest XI – Definitive Edition was praised for its style and nostalgic feel.

Caligula Effect Overdose is another jRPG game on our list taking place in a virtual world. This time it’s Mobius – an escapist dream where people clan live pain-free but empty lives in a high-school setting.

Those who realize the nature of this virtual reality form the Go-home Club, with its goal to escape the virtual world and return to reality. The tasks won’t be easy as the Mobius’ overseer will not allow anyone to leave without a fight.

Similarly to Persona 5, the gameplay of The Caligula Effect relies heavily on building relationships with the NPCs. Rasing the relationship level between the player and certain in-game characters makes them available as members of the player’s party. Developing the relationship further unlocks missions and skills for the characters, just like Social Links do in the Persona games. Other than this mechanic, TCE combat system allows linking three attacks per round – the player can preview the effects of each command to decide whether it’s tactically wise to choose it.

The reception of The Caligula Effect Overdose was mostly positive, with the critics praising the game’s setting and battle system.

What you see above are, in our opinion, the ten best games that capture the spirit of the Persona. While Atlus’ games are unique in their execution, each of the titles on our list has something to offer for those who cant wait for the next installment of the series. Some of them share a similar setting – an alternate dimension, a virtual world, etc.. Some of them feature similar characters and stories – high-school-age students solving a mystery or fighting against a looming threat. Most importantly, the games on our list are excellent RPGs offering the player unique experiences.

These titles offer a perfect way to bind the time before the inevitable release of the next installment of the Persona series.