G2A.COM G2A News Features Games like The Witcher 3 to tide you over to Cyberpunk 2077

The Witcher 3 changed the way we talk about games. Developer CD Project Red hit a jackpot with their open-world action role-playing, and several years after the release it is still being talked about. But there are no new The Witcher games on the horizon, so one has to find other titles to get a fix of monster hunting, open world exploration, and dramatic stories.

What makes a “The Witcher 3 experience”?

There are many factors which contributed to the success of the TW3. One of them is certainly the setting: the Northern Kingdoms. Velen is torn by a war against Nilfgaard, and there are plenty of signs that neither side is big on mercy. The map itself is divided into several huge open regions, giving the players a lot of freedom in deciding the course of Geralt’s travels.People were also drawn to the story and vivid characters, including the protagonist, Geralt of Rivia. Many have been following Geralt’s journey since 2007’s The Witcher one, and became invested in the old witcher’s trials and tribulations. TW3 brings the story to a close, with an ending the player worked over three games to achieve. The storyline, when it goes into full swing is dramatic and emotional, and resonated with many.

Before The Witcher 3 arrived, Skyrim had been the biggest fish in the open-world RPG pond. One of Bethesda’s most popular games, Skyrim lives on years later thanks to extensive modding community and Bethesda’s dedication to bringing it over to newer consoles with technical upgrades. 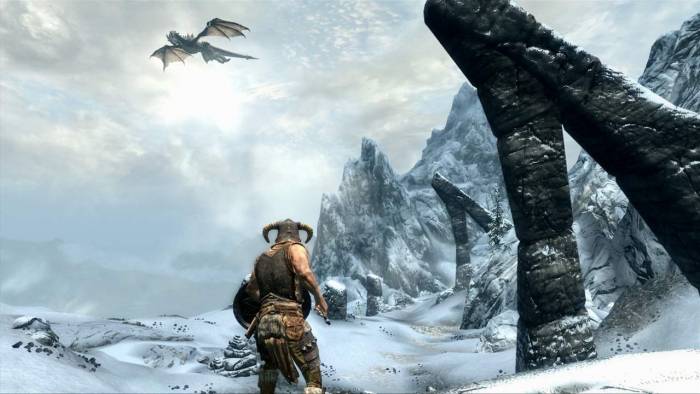 At your disposal is a large world filled with locations and activities, letting you roleplay anyone from an alchemist to a monster hunter, to a blacksmith. It’s lighter on story than TW3, but offers much more by way of immersion and roleplaying possibilities.

The Fallout series has some obvious crucial differences from The Witcher 3. The world is very different and follows a very different literary genre, but there are still elements both games have in common. 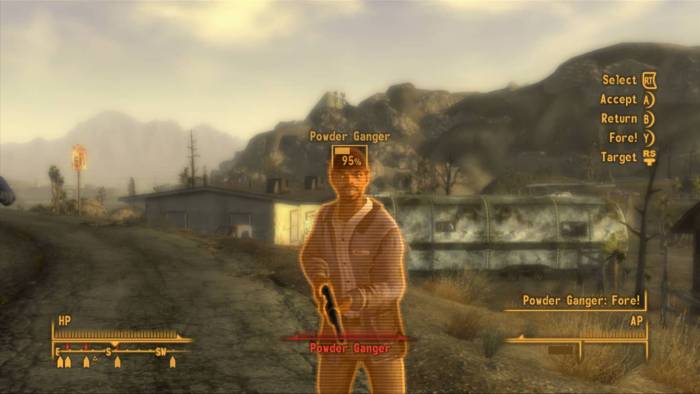 For one, much like Skyrim, they feature a large world filled with NPCs and activities. They differ a lot from game to game, but the common thread is that the maps are hardly empty of things to do. Both franchises also focus on an action-based combat system, even if Fallouts have a heavier emphasis on ranged combat than The Witcher 3. Fallout 4 even has a similar “find your missing child” storyline, which can get easily derailed by the side-activities typical for an open-world game.

Action-RPG
Step into the Wasteland and search for your father, how has escaped from the Vault you grew up in. Fallout 3 Game of the Year Edition contains every piece of...

RPG
You were there when the bombs fell, and you were put in cryostasis in one of the vaults. Before you could fully unthaw, your child was taken from you, and...

If what has drawn you to The Witcher 3 are the monster fights, then Dragon’s Dogma should be right up your alley. It’s more relevant to the topic than Monster Hunter: World thanks to its open-world structure and strong action role-playing underpinnings, including a curious storyline, sidequests, and character progression.

The Witcher 3 is undeniably a prettier game, but Dragon’s Dogma rivals it as far as designs are considered, and has it squarely defeated in terms of how it feels to use weapons. The Witcher’s oddly graceful death ballet has little on Dragon’s Dogma’s crunchy hits and ground-shaking impacts.

Action RPG, action-adventure
When the dragon came to your viallge you though it was the end, but your journey took a weird turn at that moment. Dragon’s Dogma: Dark Arisen is Capcom’s excellent...

Dragon Age: Inquisition is much more outwardly cheesy than The Witcher, but underneath the high fantasy facade there is a story dealing with some issues that The Witcher does too. Discrimination of non-humans, war between religious fundamentalism and magic users, and a foreign power trying to get a foothold in the continent.

Of course the gameplay is very different: team-based and relatively tactical, with active pause, but Dragon Age: Inquisition has dramatic storytelling, quite a few beautiful locations, and a grand scope of events.

Action RPG, Fantasy
A rip in reality threatens to change the world as the people of Thedas know it. Can you prevent the calamity? Dragon Age: Inquisition is an epic-scale action role-playing game...

After a long time of making action-adventure recreations of medieval-to-modern cities, Ubisoft decided to take a couple of steps back in time, and a massive and risky leap forward in mechanics. In Origins the developer decided to lean into RPG systems, and, seeing the success of this solution, turned the next game, Odyssey, into a full blown action RPG, and one taking obvious inspiration from The Witcher 3.

Now Assassin’s Creed games have a solid loot system giving the players always a new toy to play with, extensive skill trees catering to different playstyles, and Odyssey puts a lot of story agency in players hands. If you want to play an RPG taking place in ancient Egypt or ancient Greece, that’s the way to do it.

Action-adventure, TPP
One of the world’s most popular series is coming back with a bang. Origins takes us back to ancient Egypt where we impersonate Bayek, a champion of the people, and...

Where The Witcher 3 felt realistic and believable due to its serious tone and story, Kingdom Come: Deliverance took pains to be as realistic and historically accurate as possible. You’ll engage in tense melee fights, learn how to read, and brew herbal potions. And all of it takes place in a quite faithfully recreated medieval Bohemia. 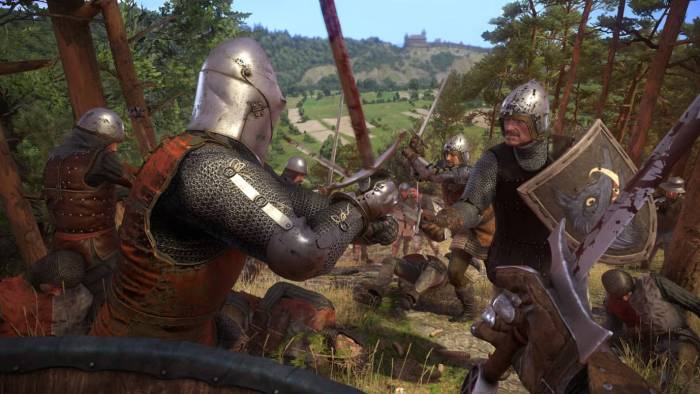 KCD doesn’t provide the sense of power that being Geralt does, but the general atmosphere of the world in both games is quite similar. Bohemia of KCD also feels very much alive, so much so that certain events can happen even without player’s input. Notably, KCD is a first-person perspective game, rather than TPP like The Witcher 3, but it shouldn’t take more than just a little time of getting used to.

The Shadow of… series shares a fair bit with The Witcher 3. Both have a gruff, but roughly likeable protagonist, both feature improbable sword skills, and both have an open world littered with things to pick up and miniquests to deal with. Monolith’s games also have magically enhanced social engineering and in Shadow of War: a subdued strategic layer.

The Nemesis system allows Talion not only to always have a new foe to hunt him, but, mixed with the hierarchy of orc horde, lets Talion plant spies in Sauron’s army and exploit them when he sees fit. This is one of the pillars of Shadow of…’s loop, alongside combat, parkour, and gathering collectibles for upgrades.

Action-adventure
Talion was a guard of the Black Gate once, protecting Gondor’s borders against Orcs. It changed when Sauron’s servants returned in force, slaughtering the garrison and reclaiming the gate. They...

Action RPG
The sequel to Middle-Earth: Shadow of Mordor takes its role seriously. It’s bigger, it’s deeper and it improves almost all aspects of its predecessor. The Nemesis system is still in...

The Witcher games owe a fair bit of their story presentation to the standard BioWare established in their Mass Effect series. ME was the first popular game to blend cutscenes with fully voiced, interactive dialogues to such a degree, and the conversation wheel became a standard for other action RPG games, The Witcher 3 included.

The story of Commander Shepard leading a multi-species charge against a primordial threat coming from beyond the Milky Way galaxy definitely captures people’s attention, and the conversation scenes made for a very memorable presentation, emphasizing the personalities of companions and NPCs and making conversations more dynamic.

Action RPG
Join Commander Shepard’s crew and help save the Galaxy from a cosmic threat descending upon it for the first time in millennia. Buy the Mass Effect Trilogy to experience friendships...

The developers of The Witcher games cited the Gothic series as an inspiration for their games. Which puts Risen, developed by the creator of Gothic, as an obvious candidate for this list. Risen gives the player a large island to explore, several factions to navigate, and an ancient mystery to uncover. 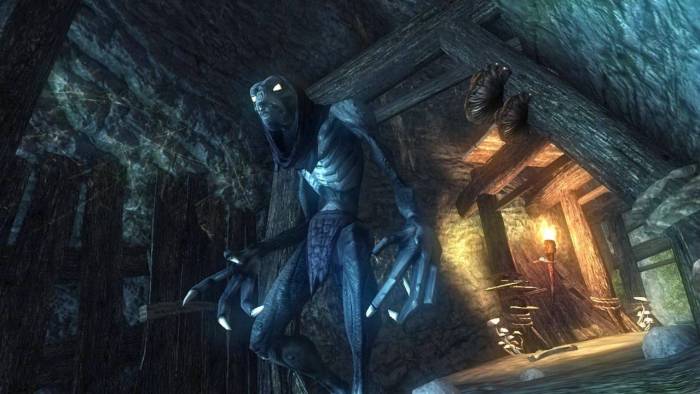 If what you loved most about The Witcher 3 was the world itself, then you’ll likely take a shine to Risen. No markers, no minimap, plenty of ways of engaging with the environment, functional climbing, diverse biomes, and tailor-made loot waiting for the most dedicated explorers make traversing the island of Faranga pleasant, worthwhile, and entertaining.

Role-playing (RPG)
The regions features in each of the included 3 Risen games are fully open to exploration and discovery, provided you can survive the challenges you’ll encounter along the way. Join...

In the absence of The Witcher 4, there is only one recourse for the fans of CD Projekt Red’s productions is their next game. Although any information about it remains limited and the full scope won’t unveil until it’s release in 2020, it’s reasonable to expect that the depth of the world and the attention to detail will be comparable to those of The Witcher 3.

Cyberpunk 2077 is based on a tabletop role-playing game Cyberpunk 2020, and will take place almost entirely in Night City, a metropolis controlled by gangs and corporations. Unlike The Witcher 3, CP2077 will be a first-person perspective game, although fans of slicing people up with sword will get a proper Cyberpunk katana.

Technology keeps progressing forward, but humans have been long since left behind. In 2077 advanced tech is everywhere, from cybernetic augmentations, through work automation to full fledged android. But societies...

A round of Gwent?

Thus concludes our list of games which may fill a part of the void left in your heart after completing CD Projekt Red’s hit game. Are there other RPGs like The Witcher 3? Certainly, but this list takes from the top. We hope we sufficiently helped you find the next title to play, one sharing your favourite features of The Witcher 3.