The year was 2006, Epic Games developed and Microsoft Game Studios released a game which would change the nature of third-person shooters for years to come. The Gears of War franchise, especially the original trilogy, was a hit and it’s still going, revitalized in 2016 by a story about the new generation. Let’s take a look at the road so far, from 2006 to the present day.

A cog in the machine: a look at the Gears of War series

Take grim-faced burly men in combat gear, add a chainsaw to an assault rifle, and sprinkle chest-high walls in strategically convenient locations between the deployment and the objective. That’s your basic idea of Gears of War. For better or worse, Gears of War managed to make cover-based shoot-outs a staple of the genre, succeeding where Kill Switch failed.

GoW had great co-op multiplayer, crunchy combat with incredibly satisfying chainsaw finishers, and some really impressive graphics. The plot had a simple premise: after 14 years in prison, a former soldier Marcus Fenix is released to join a team of COG soldiers on a mission to put an end to the Locust threat. Nothing too complicated, the story was carried mostly by the strong friendship of Marcus Fenix and Dominic Santiago.

The Locust, in retaliation for what happened on GoW1, want to sink human cities on the surface of Sera. Sergeant Fenix needs to lead his Delta Squad to stop their nefarious plan. There are also strong personal moments, especially for Santiago.

In addition to the weapons and features carried over from the first game, GoW2 adds some of its own. For example Marcus and Dom can use the dead enemies as meatshields, and there are five new weapons, including two heavy ones. The multiplayer saw the addition of new modes, such as 5-player PvE mode “Horde”, which is a now-standard co-op survival mode.

Although not the last one featuring Marcus Fenix, GoW3 is the last where the grizzled soldier is the protagonist. Concluding the trilogy, it does a good job resolving hanging plot threads and closing the story. On the gameplay front, GoW3 added tagging enemies, which causes your squad to concentrate fire on them.

Progress through any mode nets the players experience, which can then unlock special cosmetic options in the multiplayer, such as weapon or character skins. Oh, and cover can occasionally be destroyed, so it’s better not to grow complacent.

A little known instalment of the series, but worth mentioning nonetheless. Instead of Marcus’ et co. it follows the duo of Damon Baird and Augustus Cole in a series of flashbacks to events predating the story of the main trilogy.

Gameplaywise, it doesn’t differ much from the previous three games, except in the world structure. It has discrete, self-contained missions rather than larger, open maps of the predecessors, which allows much less sightseeing and prohibits entirely going back to the previous mission locations.

Taking place 25 years after the events of GoW3, Gears of War 4 is the story about a new generation. Quite literally, as this one’s protagonist is J. D. Fenix, Marcus’ son. He and his friends got into some trouble, but the facing consequences had to wait because of an attack from unidentified creatures. 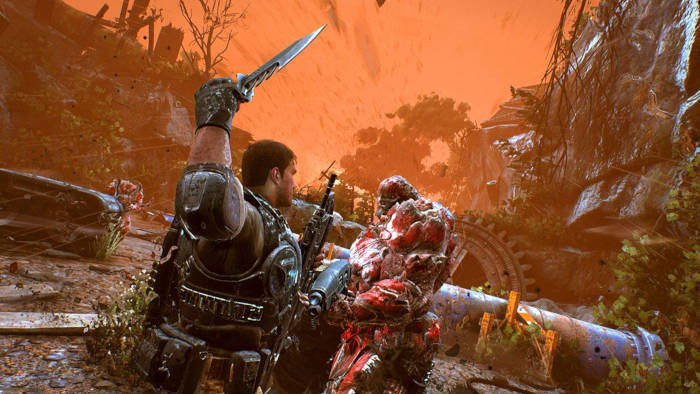 GoW4 plays very much like any of the previous games, clearly not interested in fixing what isn’t broken. As far as new features go, there are new weapons (such as a sawblade launcher) and players can performs a shoulder charge to knock enemies prone. There’s also a weather system, which influences visibility and weapon performance.

Don’t be confused by the titles dropping the “of War” part, there’s still going to be plenty of shooting and convenient cover waiting for you. G5’s protagonist is Kait Diaz, who was a part of JD’s team in GoW4. It does make sense, given how we’re investigating her family history this time around.

Gears 5 appears to be a full return to form for the series, especially with an interesting and engaging campaign, playable by up to three players in co-op. Of course, in a true GoW fashion, you can play locally in split-screen if you want to. The Horde mode is back as well, as good as it’s ever been.

How many more Gears of War games are we going to see? It’s a mystery at this point, but The Coalition so far are doing a great job picking the franchise up after Epic Games. Fans of the license probably shouldn’t be afraid of being left stranded.