Strategy video games constantly evolve, introducing new features to the known gameplay. And although players do not always seem to enjoy them at first, they change their minds with time. Such a situation applies to one of the most praised video games on Steam – Civilization 6.

The creators of this spectacular title decided to introduce some groundbreaking changes to Civ 6 strategy gameplay. You can expect different combat, city-building mechanics, and politics. But there is one new feature that significantly boosts the classic Civilization experience – DLCs! Including entirely new scenarios, maps, and historical periods. So if you are looking for some creative ways to spice up your strategy adventures, you are in the right place! Welcome to the complete list of all Civ 6 expansion packs to play in 2022.

It is the first big add-on to the Civilization VI video game, released in 2018 for PC, Xbox One, Nintendo Switch, and many other platforms. With this DLC, you gain access to massive additional content providing fun like never before! 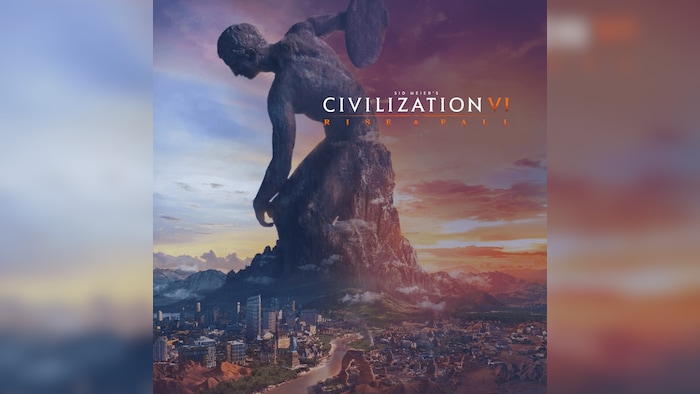 Feeling ready for some epic gameplay fun? With Rise and Fall DLC, you will experience dramatic changes and face new challenges in developing your civilization. With proceeding through hundreds of years of growing your nation, you can now enter Dark, Golden, or Heroic Ages. You can also add governors to your cities to gain more bonuses and progress in development. But your fast growth can bring pleasant surprises and punishments as well. With the Emergencies feature, other nations can join a pact to thwart your plans and destroy your dreams of great power. This DLC is a whole bunch of new possibilities for all fans of Civ 6 addictive gameplay!

Welcome to the second massive expansion pack for your favorite strategy game from Sid Meier! Get ready for surprising events and unexpected twists that can drastically affect the development of your civilization. This exciting DLC knows no mercy! 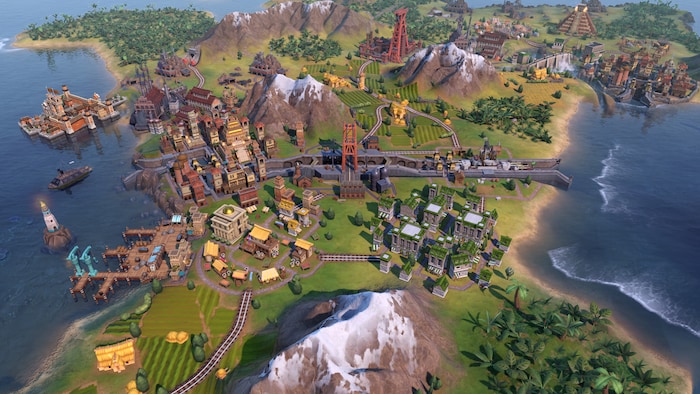 Discover even greater realism with unexpected natural disasters that can strike your empire at any time. There will be volcanoes, tornadoes, and sandstorms that can turn your achievements to dust in one second. You can also witness the sudden global warming and its tragic consequences. If you don’t manage your energy sources properly, the situation can become very alarming. Take part in the World Congress meetings, and solve all crises together with other leaders! In this inspiring expansion pack, you will also get addictive content like the Black Death scenario, new buildings, civilizations, and more!

If you’ve been waiting to play one of the greatest ancient civilizations, today is the day! Lead the Aztec nation and discover unique bonuses available to owners of this expansion. 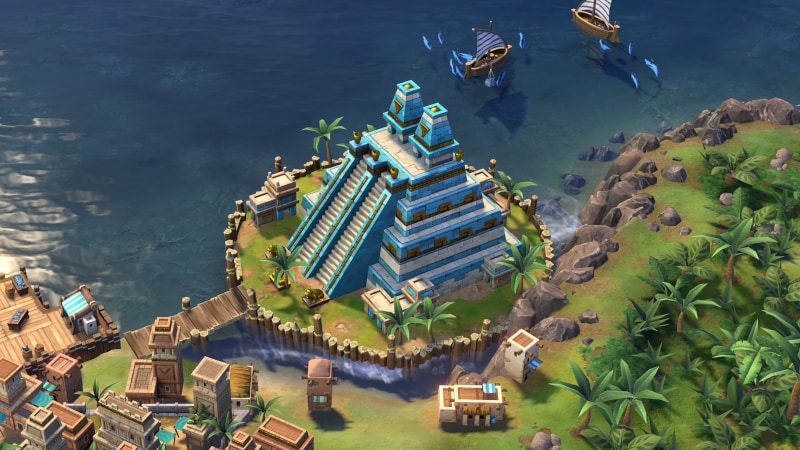 Access the ancient Aztec civilization and its charismatic leader Montezuma. And with them, many fantastic bonuses! See the extraordinary skills of Eagle Warriors, construct an entirely new building and build the monumental Huey Teocalli. Your impressive skills will surely surprise your enemies!

Guide King Jadwiga and establish your empire in the heart of Europe! With this civilization, you will crush your enemy with entirely new methods and discover bonuses to religion. 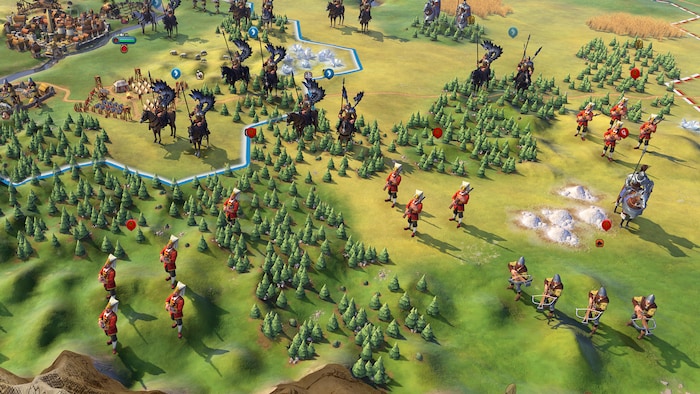 Poland is valuable prey for European countries, and your task will be to defend it against invasions. Discover new religion and relic bonuses and fight with the winged hussars on the battlefield! Conquer and steal new areas and design a unique medieval building – the Cloth Hall. It is your day to establish a powerful religious empire in Europe!

Wanna become a fearless conqueror, always ready for new voyages into the unknown? Play as one of the mighty Scandinavian rulers and create your legend on the conquest map of all of Europe! 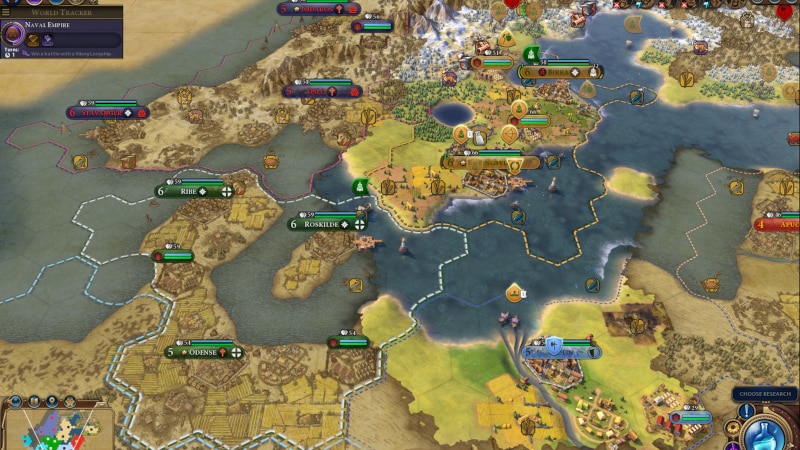 In this unique expansion, you will be able to build three new natural wonders and six city-states with bonuses to the chosen aspect of development. Play as a mighty Viking leader and plan your conquests in the farthest corners of the continent. Invade England or the cities of the Mediterranean and acquire unimaginable riches to build a real trading empire. In this expansion, you will rise as the born warrior!

Lead the most faraway civilization! Australia is a unique place that can develop even in the most challenging conditions. Discover the abilities of this tough nation and play through a captivating scenario as John Curtin himself. 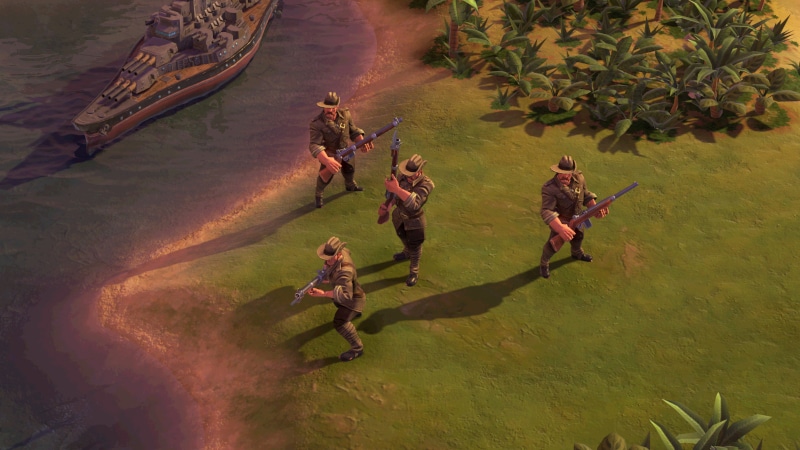 Australia DLC is a fun recommendation for players who like to play on the islands. This nation receives special bonuses for the development of coastal cities. By building livestock farms, you will unlock new technologies and increased production. And production means profit! And that is not all, as in this set, you will also receive a digger combat unit, which will receive bonuses for fighting in fields bordering the water.

In this expansion, you will lead the ancient empires of Persia and Macedon. Manage the actions of Cyrus and Alexander the Great to seize power in the world! Will you choose cultural development or lose yourself in brutal wars? Play an inspiring new scenario and see for yourself! 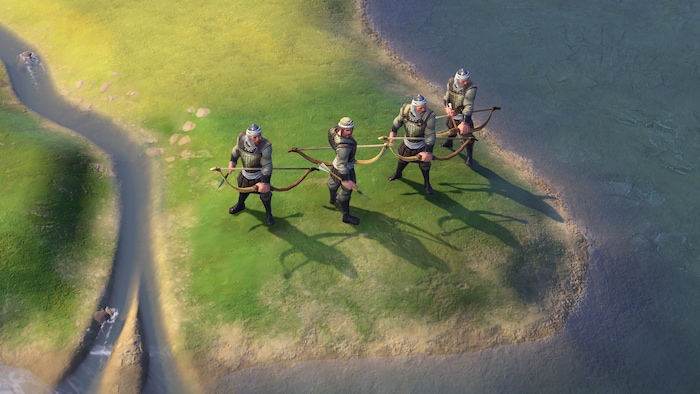 Play as Macedonia and experience the combat like never before. Conquer enemy cities, use proven combat units, and wage long-lasting wars to tire your opponents. Discover the unique bonuses for Macedonia and play a scenario where you will become the ruler of the whole world! Or lead the Persian civilization and focus on war and unlimited perks. Trade, develop culture and earn gold to win the race for the development. In this expansion, you will also build two unique Wonders of the World and discover many new gameplay possibilities in the most fruitful times in history.

Take command of the people of the ancient Nile Valley! Play as Amanitore and create an African power immune to any crisis. This bundle includes a brand-new civilization, combat units, and an exciting scenario.

Guide Nubia and use the unique abilities of this civilization to expand your empire in the great race to victory. Choose a ranged fighting style and develop your units to gain an overwhelming advantage on any map. Build a pyramid and discover a unique city development. And all this in a fascinating scenario where you will delight your people with the monumental temples to Amun scattered across the shore of the majestic Nile River.

Travel to Southeast Asia and discover an exotic land where religion plays a vital role. Lead the Indonesian or Khmer civilization to battle for domination and influence! 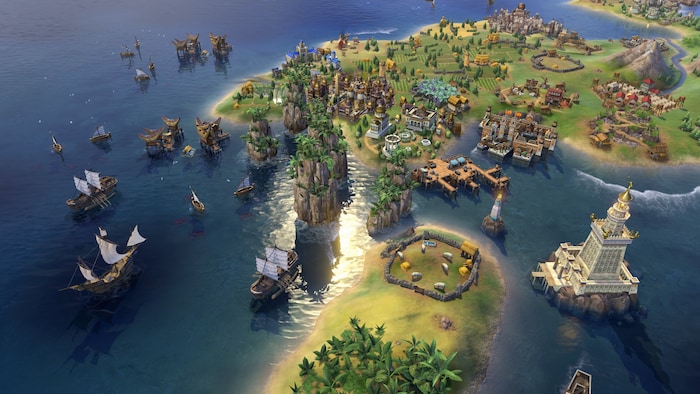 Play as Khmer and build aqueducts to get unique bonuses for living near rivers. Increase your food production, use religious units in combat and surprise the enemy with Domrey – a powerful ballista on the back of an elephant. Or choose the Indonesian side and use the faith bonus to grow your empire faster. With this civilization, you will be able to create a fleet of Malaysian junks that are very useful in combat. Explore the abilities of each of the two civilizations and play a scenario where you fight for religious influence on exotic islands.

Play as Lady Six Sky or Simón Bolívar to lead the great Mayan civilization or the Gran Colombia nation! Get ready for massive content of new city-states, catastrophes, combat units, and other fantastic additions to your favorite Civ VI gameplay! Play the Maya and discover new unique civilizations and leadership skills that will give you a range of food production and gold bonuses. Try hul’che units on the battlefield, create a unique district and acquire new resources. Or lead the Gran Colombia civilization to engage in large-scale military operations to conquer enemy nations. But there is more! This expansion also adds the disaster-filled apocalypse mode, new natural wonders, and six city-states with significant bonuses for the game. Get ready to spice up your Civilization 6 experience in one of the most extensive add-ons!

Ready for some groundbreaking changes? In the Ethiopia Pack, you will discover gameplay features that you will never find in any other expansion pack! Guide the civilization of Ethiopia and earn the most valuable bonuses in the history of Civ 6. 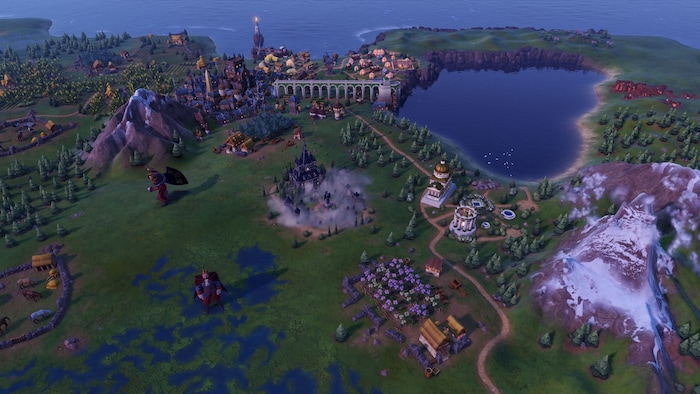 Ethiopia is a civilization that depends on the development of faith. Build majestic cities and use the valuable skills of Menelik II to enjoy science, culture, and combat strength bonuses. Develop religion, command a new combat unit and build a new district and buildings. And with the Civilization VI Expansion Pack installed, you can also have fun in the brand-new Secret Societies mode. Their presence enables new development paths and the use of previously unavailable skills.

Lead the Byzantine Empire and expand your religious influence on the map or lead the Gaul civilization to discover new military possibilities. This and more you can find in the epic Byzantium & Gaul Pack! 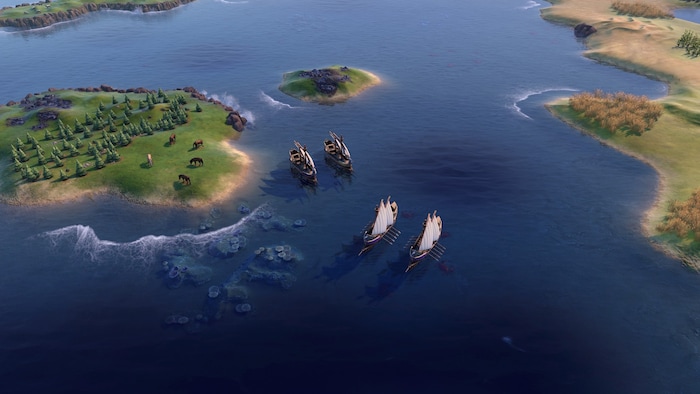 Spread your religion to the farthest corners on the map to get fantastic bonuses for development. Use Tagma on the battlefield, convert others to your faith, and rise as the master of the greatest empire in history! Prefer playing with the Gauls? Earn additional culture by building a mine. Create a unique district, train new warriors, and see how easy it is to combine military and cultural development. In this expansion, you will also discover the Dramatic Ages game mode, access a new map, and build stunning World Wonders!

It is a recommendation for enthusiasts of scientific development. Witness the groundbreaking reign of Hammurabi and decide about the development of this powerful civilization through hundreds of years of history. 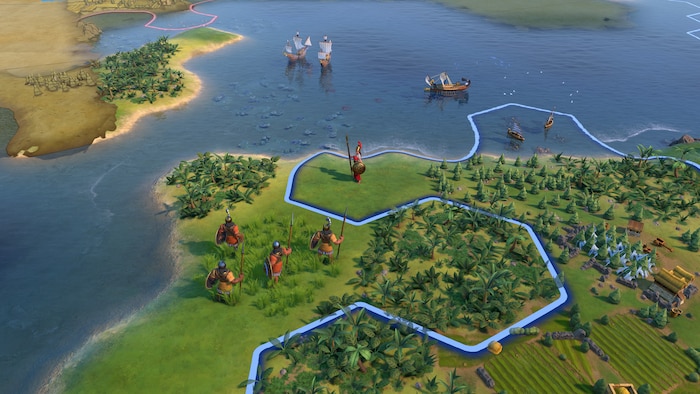 Become the master of the fastest scientific development! Wage wars with powerful Sabum Kibittum units, increase food production with unique structures, and develop the technology. Babylon Pack also includes an exciting Heroes and Legends mode where you meet the most famous historical figures. Their presence can make a crucial difference to the gameplay and your ultimate success!

It is the perfect DLC for fans of building and conducting military maneuvers in the most forested areas. Build among jungles, forests, and swamps to earn bonuses for scientific or cultural development and bring the whole world to its knees! 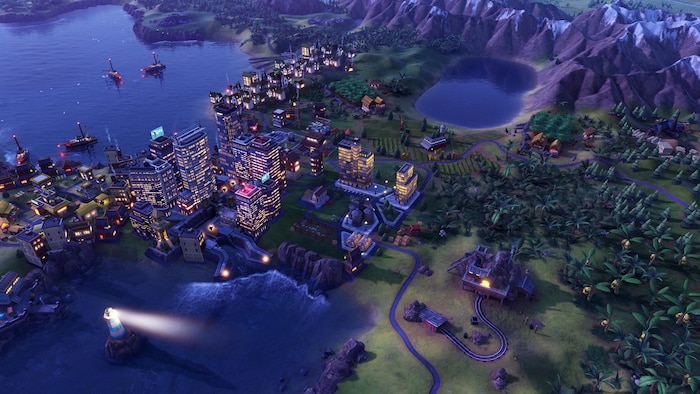 Lead the Vietnam civilization or discover the legend of Kublai Khan and lose yourself in the development of Asian empires. Use forested areas and swamps to gain an advantage on the battlefield and receive special bonuses for building structures. Have fun in the new Monopolies & Corporations mode to discover the enormous opportunities for city growth and get rich through the industry. It is the perfect addition for developing various features of the nation at the same time!

It is a recommendation for fans of sea conquests and the development of trade routes. Manage João III’s actions and discover the power to gain wealth and influence. 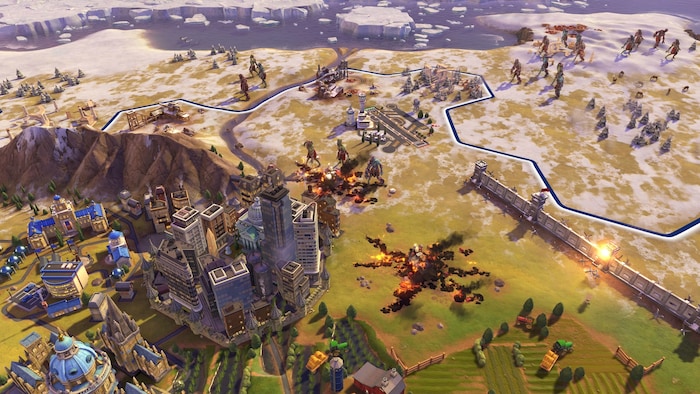 Portugal is a civilization focusing almost exclusively on international trade. Create trade routes and increase your income by upgrading merchant units. Use a powerful science unit in combat at sea and discover the benefits of using the increased sight skill. Are you ready for zombies? The Portugal Pack introduces an epic zombie combat mode where you will have to stop hordes of the undead on their way to destroy the entire world. Have fun!

Strategy games like Civilization are fun and perfect for hundreds of hours of engaging gameplay. But this title offers so much more than just having a good time! Strategy games from Firaxis fantastically depict the development of nations and various cultures over hundreds of years. Whether we like it or not, by playing Civilization, we learn history. All Civ 6 expansion packs introduce exceptionally detailed historical periods, situations, and locations, which we can freely modify by testing various strategic outcomes. And maybe the Civilization series is not the only educational tool we should decide on in our life but it certainly does not lack informative value.