There are several ways to make the game better and more enjoyable to play. Depending on the genre, it could be the freedom of choice, modern graphics, unique gameplay mechanics, a big open world that feels alive, or interesting non-player characters – and today we’ll focus on the last one.

We will try to avoid spoilers but we can’t guarantee there are none, so you may want to skip a few paragraphs if you didn’t play a certain game before.

Here is our list of top 10 interesting NPCs in video games.

For the first most interesting NPC we chose Gaunter O’Dimm from The Witcher 3: Wild Hunt. Although he makes his appearance in the main game, he doesn’t reveal his true identity until the first expansion pack, the Hearts of Stone, and even there he remains a mystery for the large part of the game.

He is probably one of the best-written villain characters in gaming – a powerful being that’s capable of doing things beyond even a witcher’s imagination, yet instead of manifesting his power and showing who’s the boss, he acts disturbingly calm – he prefers to stay in the shadows observing people and then giving them what they want or need in exchange of a seemingly insignificant price. He is so scary that his music theme will haunt you even long after finishing the whole expansion.

For the next NPC we chose GLaDOS from Portal 2. GLaDOS is a female-voiced artificial intelligence that serves the role of a guide and narrator for the majority of time.

She is responsible for navigating players through a number of test chambers – these are separate enclosed rooms, and each of them can be considered a unique 3D puzzle, where you will need to creatively use the environment and your portal gun to get to the exit. GLaDOS is not a typical NPC, and probably not the one you would expect to appear on the list, but because of her funny dialogues and sarcastic comments on player’s actions, we believe she is a fine addition.

There are at least several cool characters in Borderlands 2 to choose from, but we went with Claptrap – a short, humorous, silly, and sometimes annoying robot that makes his appearance right in the beginning of the game, but you may already know him from the first installment of the Borderlands series.

He provides or at least tries to provide assistance on player’s ultimate quest, which is to find and defeat Handsome Jack. Claptrap’s lighthearted and bright personality makes him a very likable fellow, and even if his inaccurate puns and semi-funny jokes might sometimes leave you with a weird aftertaste, it’s all a part of his nature. He’s one of those NPCs that are hard to forget – and not in a bad way.

If you are familiar with BioShock series, you may be surprised that BioShock Infinite takes place in an entirely different location than two previous games from the series. But we’re not here to talk about the game itself, but about the NPCs, and there’s one worth mentioning. Elizabeth is a young and adorable girl met by players when they are tasked with freeing her from her tower, and it’s not long after the beginning. 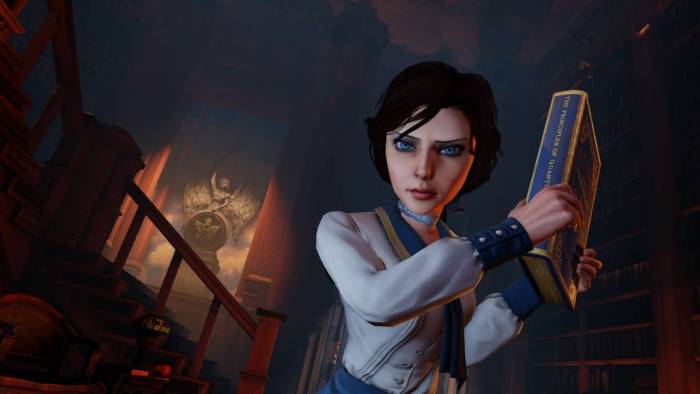 Then she becomes player’s companion and a friend – she will follow the protagonist, comment on certain events, and even help him by distracting enemies and throwing him useful items. She’s curious of the world around her, and it’s not surprising, considering the fact she was imprisoned since she was a child. Watching her as she gets excited over simple things may cause your heart to feel warm at times.

Although Vaas was not even the main antagonist in Far Cry 3, he was so memorable and charismatic that he easily overshadowed the man who was pulling the strings. If you asked someone who played Far Cry 3 what character he remembers best, it would probably be Vaas, the insanity guy.

We meet Vaas right after the beginning and we quickly realize that he may be out of his mind. He usually stays calm but he gets mad easily and suddenly he becomes impetuous and angry. In fact, he’s a ruthless psycho, and even if he tries to pity his victims, he doesn’t really mean it. All of this combined with his dark sense of humor results in him being put on the list of the most interesting NPCs in video games.

It was a tough choice between several interesting characters, including Joker and Garrus, but considering the fact that Wrex gets the least love when speaking of the most interesting characters from Mass Effect, we decided to pick him so he won’t feel abandoned and forgotten. Wrex represents krogan race – tough and big with little brain, biologically programmed to conquer the universe.

Due to krogan’s military aspirations, other races decided to take action and lowered their breeding abilities with use of the so-called genophage, and Wrex’s mission in the Mass Effect trilogy is to find a way to reverse this process. Although he can be impulsive and aggressive, you can always rely on him, and once you earn his trust and respect, he also becomes a loyal companion and a friend.

GTA IV starts with the main character, Niko, coming to America, where his older cousin Roman lives. One of the first things we learn about Roman is that he is a liar – he always bragged about living the American dream, having tons of money and all the luxury stuff, but Niko learns that in reality it’s quite the opposite.

Roman is not a bad guy, but he is a man with gambling problems – these problems made him some powerful enemies and now Niko has to sort everything out. Roman may appear to be annoying and ungrateful at times but he is a useful companion and always tries to give a helping hand. He also has some sense of humor and never says no to a glass of cold vodka when you call him – even if he can’t solve your problems, at least he will listen.

Even if you didn’t play any Dark Souls game before, chances are you’ve seen the praise the sun gesture somewhere on the internet, and it was made popular by no one else but one of the Warriors of Sunlight, Solaire of Astora, from the first Dark Souls title.

Over the course of the entire game we don’t get too many interactions with the guy, but he is still worth being mentioned here, as he is indeed a very interesting and mysterious person, or we should rather say undead. He has only one goal – to find a sun of his own. As the game progresses, he will appear several times in different places and we will be able to learn how is his journey going.

The Stanley Parable – The Narrator

It’s a tough one, because it’s a matter of definitions – can the voice without a body be considered an NPC? For the sake of this one particular game, let’s say yes. Stanley Parable is an original game that lets you play as the titular Stanley, a simple man with a simple job.

One day something weird happens and he can no longer perform his tasks, forcing him to investigate what’s going on. As you explore your workplace, the narrator will comment on your every move. What’s interesting is the fact, that you are not forced to do what the narrator says, and if you disobey his instructions, he will react accordingly. This interaction makes the narrator from The Stanley Parable a very interesting NPC and adds a lot of value to the Galactic Cafe’s production.

For the final entry we also don’t have a typical NPC but one of the leaders of India from Civilization game. Let’s say that as long as you’re not playing Gandhi, he’s an NPC of sorts. Anyway, the reason we put him here is the first Civilization game, where, due to some integer errors in the game’s code, Mahatma Gandhi could easily become the most aggressive and nuke-loving leader instead of being the most peaceful one he was intended to be.

It was so hilarious to watch such a pacifist mindlessly nuke all of his enemies that it turned into an on going community joke. What’s more, developers are well aware of it, and they are still referencing it in newer Civilization games – in Civilization VI Gandhi was even purposefully given a 70% chance to get a Nuke Happy hidden agenda.

Depending on the genre, adding NPCs to the game is often necessary to make the title more enjoyable to play. But what is an NPC? It’s simply any character that is not controlled by players – a non-player character. It could be a simple pedestrian, a quest-giver, a merchant, a computer-controlled member of your team, or even a character controlled by someone from the development team. Although monsters and creatures are also technically non-player characters, these are rarely referred to as such. More often than not an NPC means a human or humanoid being that’s scripted to perform simple tasks or is not scripted at all.

Now, what makes NPC an interesting one? Well, it depends on what we consider interesting. Dialogues may be interesting, but so does his voice, appearance, style of combat, his past, and so on. Interesting doesn’t necessarily mean original, but it could be the case – an original character has a lot more potential to become an interesting one than a character with a copy-pasted personality. If we extend the definition of an NPC to any non-player being, even one without a body, then it opens up some new possibilities to consider, such as the narrator from The Stanley Parable. If you know other interesting NPCs that couldn’t be found on the list above, feel free to share.