Games like ARK
Sharpen your stone axes and grab your wooden spears – we’re going on a hunt for the best ARK-like games available on the market.

When thinking of Minecraft, probably the first thing that pops to your head is the limitless creative potential.

Erecting enormous structures, building entire cities, recreating the locations from your favorite books, movies, and TV shows – that’s what you imagine when you hear about the game created by the developers at Mojang. But Minecraft is on our list for a reason, and that reason is the Survival Mode. 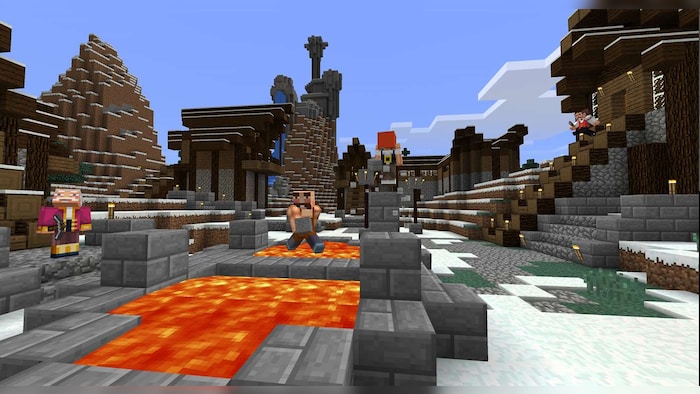 In many ways, the Survival Mode of Minecraft is very similar to the core gameplay mechanics of ARK. Much like the beach in A: SE, the player’s settlement in SM is surrounded by an area inhabited by monsters. he player must expand the settlement, by traveling into the darkness and collecting materials to strengthen their home.

The creatures of the dark will attack the player on sight so the player should always be well-prepared, having plenty of craftable weapons and armor to defend themselves. Minecraft received many positive reviews and became a global phenomenon.

We abandon the colorful, albeit a bit creepy Minecraft world and dive deep into the survival mode with The Forest.

At first glance the game doesn’t have much in common with ARK: Survival Evolved. The setting is pretty plain and the plot that got us there is simple – we play as the survivor of a plane crash, looking for his missing child in a mysterious forest. But wait, is that an alien kidnapping a child? And what’s with these weird wooden structures? And that definitely looks like a work of some cannibals, yikes! 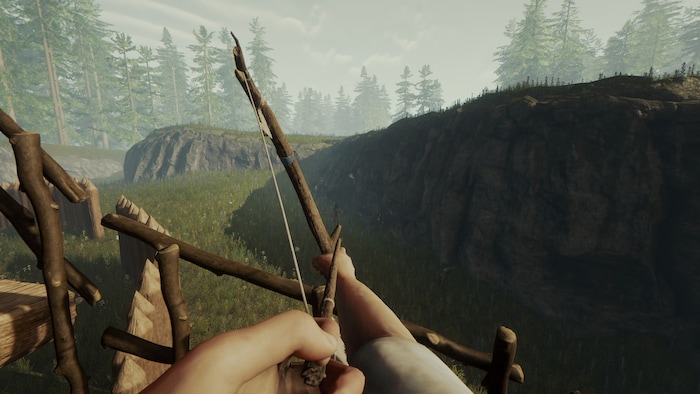 Yes, The Forest is pretty similar to ARK: Survival Evolved in both setting and gameplay mechanics, crafting being the most important one. The player or players – the game can be played in online multiplayer – have to build shelter, create makeshift weapons for defense, and collect supplies to survive in the wild.

To make the gameplay more survivalist, the game only allows saving within created shelter – there is no autosave option. Talk about hardcore! The Forest was met with solid reception and sold in over 5 million copies. The sequel, dubbed Sons of the Forest, is currently in development.

Well, it has dinosaurs so it counts…right? Dino D-Day is a multiplayer first-person shooter set during World War II.

The players select the side of the conflict they want to fight on – the Allied or the Axis. Both factions are also equipped with a special kind of weapon – dinosaurs! Due to good ol’ Adolf’s dabbling into dark arts, the prehistoric reptiles are back and fight on the fronts of the world for both sides. 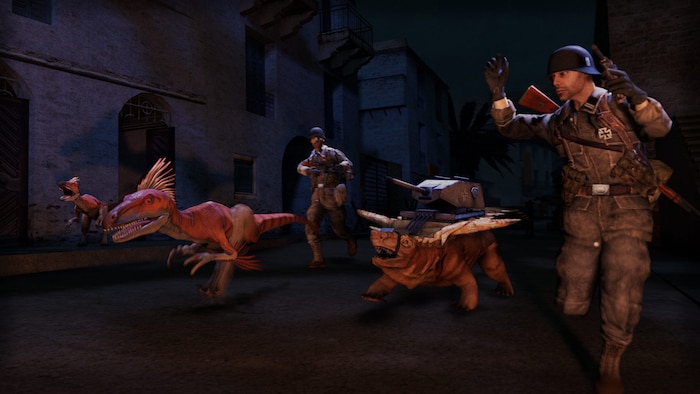 After selecting their faction, the player can choose the character class they want to play as. The Allied forces include classes like assault, medics, and heavies. The Nazi forces replace heavies with snipers. Both factions have their dinosaur units, equipped with different types of weapons – machine guns, explosives, and others.

The game features several modes, including team deathmatch, king of the hill, and objective mode. Dino D-Day received solid reviews, with critics praising the graphics and alternative history themes of the game.

Rust is the first game on our list that combines the survival and battle royale mechanics.

In this multiplayer title the player is put on a procedurally generated map, armed only with a torch and a rock. With these tools they will have to gather supplies and defend themselves against other players, dangerous fauna, and other elemental dangers. 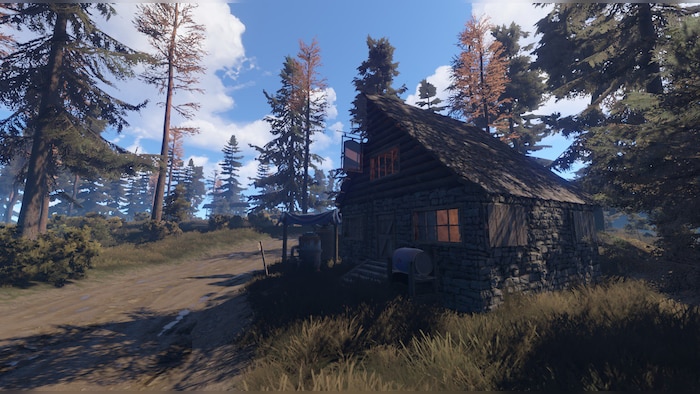 Facepunch Studio’s survival game started as a clone of DayZ, a popular post-apocalyptic survival simulator. However, the developers decided against making another zombie game, instead opting for a battle royale survival experience.

The mechanics of Rust include typical elements of item crafting, maintaining good health by proper nutrition, and of course fighting other players. To these, Rust adds frequent item drops, ranging from survival supplies to weapons and vehicles, like attack helicopters and others. Rust received highly positive reception from the reviewers.

A list about surviving in a world filled with dinosaurs would not be complete without this legendary title.

In 1997, Turok was a revelation – it combined the first-person shooter mechanics of Doom and world exploration seen in Tomb Raider. The character of Turok, a Native American warrior tasked with protecting the barrier between the worlds, quickly became one of the most popular protagonists, eventually gaining cult status. Also, the game lets you hunt dinosaurs with a bow and arrow. How cool is that?! 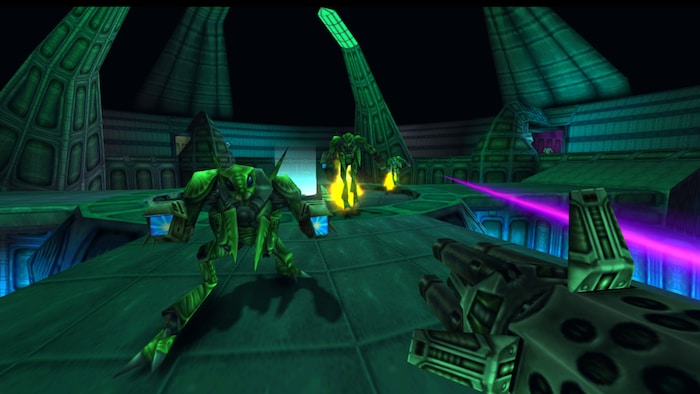 The core gameplay mechanics of Dinosaur Hunter involved traveling between the game’s hub world and seven other stages. Within each stage, the player must complete various objectives and find keys.

Completing objectives unlocks parts of the Chronocepter, a powerful, weapon, and keys unlock further levels. Turok is armed with a variety of weapons he can use against his enemies, including a knife, bow, and arrow, as well as a variety of futuristic guns. Turok: Dinosaur Hunter as well as its sequel, Turok 2: Seeds of Evil, both received universally positive reviews from the critics.

If you liked that one documentary, in which James Cameron dives into the oceanic depths in a submersible, this game is just for you. In short, Subnautica is like ARK: Survival Evolved but underwater.

The plot of the game – as a survivor of a spaceship crashing down on an oceanic world, the player is tasked with exploring the depths and establishing a research base to figure out the way of getting off the planet. 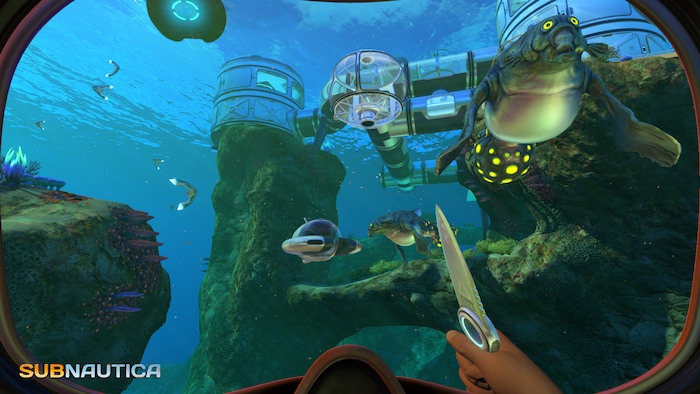 The former won’t be easy as the vast waters of this unknown world are inhabited by all sorts of creatures – some friendly, others – not so much.

The game can be played in several modes, including Survival, in which the player has to balance exploration with maintaining their health, thirst, and hunger meters, as well as other variables such as oxygen supply. Subnautica received positive reviews from the critics, and won the award for best PC game at 2018 Golden Joystick Awards.

Like Dino D-Day we’ve already discussed on our list, Primal Carnage pits humans and dinosaurs against each other. This time though, no Nazis.

The premise of PC bears strong similarities to the [link,71964]Jurassic Park[/link] series. A remote island, an experiment to bring back dinosaurs, but then everything goes to hell – sounds familiar? Luckily, the game is not plot-heavy, relying on multiplayer battles between humans and resurrected dinosaurs, instead. 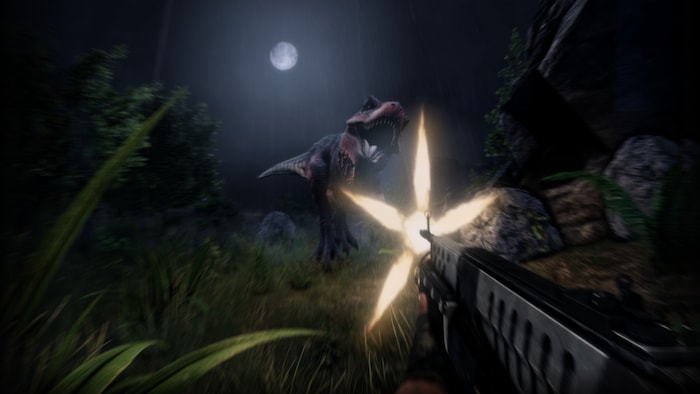 The player can participate in three game modes: Team Deathmatch between the human and dinosaur teams; Capture the Egg, a CTF variant; and Get to the Chopper, where the players must move between linear points to signal a rescue chopper. The human team consists of several classes, including Commando, Scientist, Trapper, etc.

Each class is equipped with a different type of weapon. The dinosaur classes include Tyrannosaurus, Dilophosaurus, and Pteranodon, among others. The dinosaurs aren’t armed, but possess unique skills and stats, making them tough adversaries. The game was met with solid reception from the reviewers.

What happens, when you combine the gameplay mechanics of Minecraft and ARK: SE? Well…this. PixARK utilizes many solutions from both games.

Its visuals are decidedly Minecraft-y, as are some of its gameplay mechanics. For example, the player can reshape the map by adding and removing blocks. Digging for minerals to craft various items is also present. 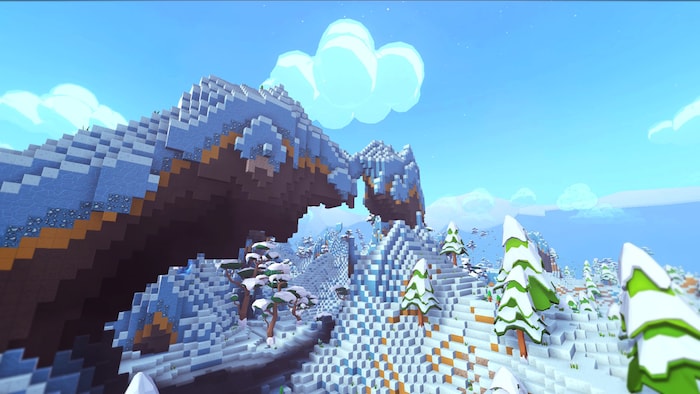 The rest of the gameplay is pure ARK – survival on a mysterious island inhabited by dinosaurs, gathering supplies, facing other players, etc.

Like in the original game, the beasts can be hunted down or tamed to serve the player. PixARK features a procedural quest system, constantly providing the player with new challenges. PixARK’s reception was highly positive.

There are no dinosaurs here, but there are zombies. And survival. DayZ was born as a standalone mod to Arma 3, a tactical shooter with emphasized realism.

In the game the player controls a survivor of a zombie apocalypse, roaming the area of Chernarus in search of supplies and working with or fighting against other survivors. 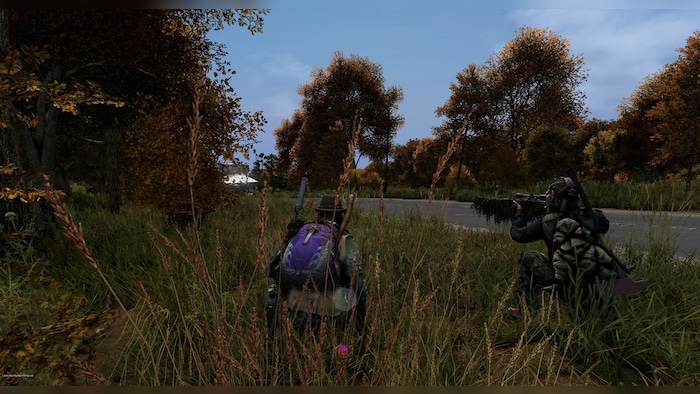 The survival aspect of the game is heavily accentuated. Anything that can kill the player in real life – from malnutrition and dehydration to various diseases – can also occur in the game world.

This is why staying healthy and well-fed is key to staying alive in the world of DayZ. The game was met with positive critical reception and found a robust player base with more than a million of sold copies.

The Hyborian Age awaits its new hero…to manage their health and knit a fancy dress.

Based on the stories of Conan the Barbarian, Conan: Exiles features all the mechanics of an ARK-like survival game (maybe they should make it a sub-genre, or something?). Here you will find health management, crafting clothes and items, and fending off hostiles – both human and beast. Thanks to the fantastical setting there are even dinosaurs and dragons to be fought. 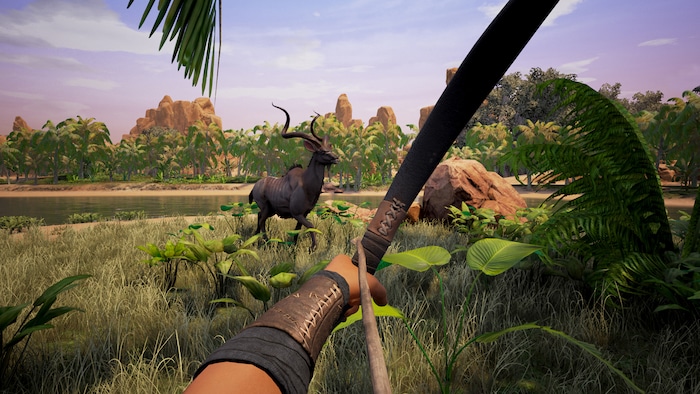 Aside from that, C: E features an advanced character creation system, a system of religious beliefs that influence what benefits the player can receive throughout the game, as well as level-based progression.

Conan: Exiles received solid reviews, was a commercial success. The game caused some controversy for its gore nature and character creation options, which allowed some liberal manipulation of intimate body parts.