Halo is one of these iconic and memorable video game series that earned a special place in our hearts. It probably doesn’t hold true if someone’s not particularly interested in first-person shooters in general, but even then, the Halo name alone will most likely ring a bell, which tells a lot about the series’ popularity and global success.

Master Chief’s story is filled with action and unexpected twists, resulting in a very enjoyable and one-of-a-kind sci-fi adventure. But despite being so good, it’s entirely possible that you already know the entire Halo series in and out, and now you’re in dire need of games that could provide a similar experience.

So, without further ado, let’s take a look at some of the best games like Halo for PC and consoles on the list down below.

DOOM Eternal continues the legacy of classic Doom games and it does its job well – you don’t have to take our word for it, as there’s no better proof to that than very good reviews on the Steam platform.

DOOM Eternal brings back the classic fast-paced dynamic first-person shooter and allows us to enjoy the original experience once more, but in a more modern way. 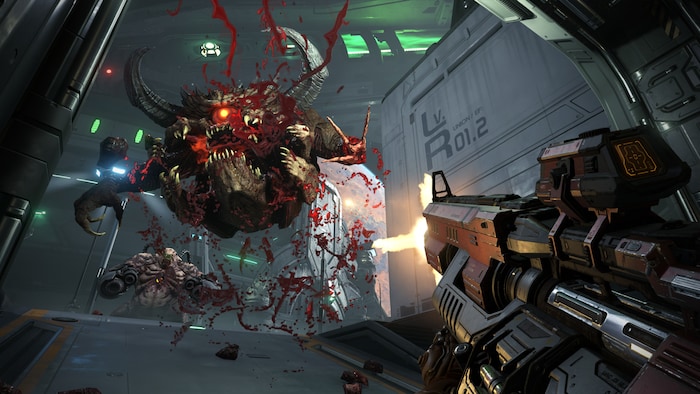 Following the events of the game from 2016, now you’ll be tasked with stopping evil aliens from destroying humanity. The game features several playable modes, including the new Invasion mode, where you can invade other players as they play and duel them in their worlds. It’s great to see that despite having much better graphics than original DOOM games, it didn’t lose its DOOM spirit – retaining original gameplay is not an easily achievable feat when making sequels.

If a solid online multiplayer game is what you’re looking for, you should try Destiny 2 – a title that’s focused mostly on playing with other players.

Destiny 2 is a multiplayer first-person shooter and a sequel to the first Destiny from 2014. It has a sci-fi setting and features countless futuristic technologies, weapons, and equipment for players to utilize on the battlefield. 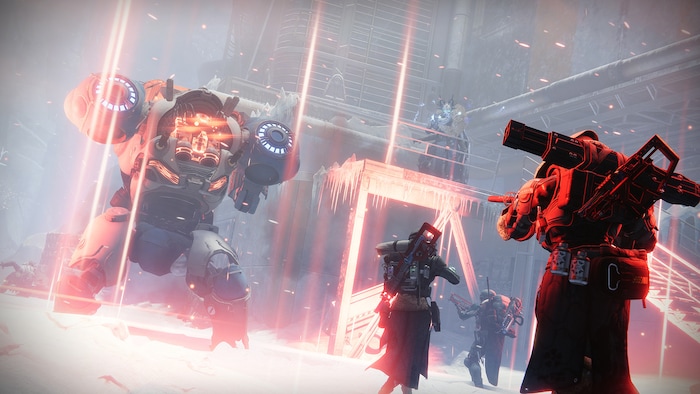 While it offers certain single-player activities, it’s clearly designed to be played online, where the most content is hidden. It’s worth noting that activities in the game are divided into groups of player-versus-player and player-versus-environment, which means that even if you prefer to play in a less competitive environment and cooperate with other players instead of hunting them down, you’ll still be able to fully enjoy the game.

Yes, HF2 is quite old, but sometimes you just can’t compete with classics that inspired entire generations of future shooters.

Valve always somehow managed to surprise the entire gaming community with their innovative video game designs that set standards for games that had yet to come. 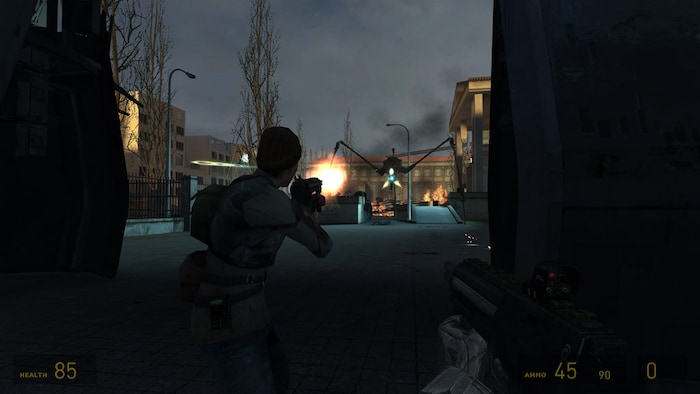 Half-Life 2 was no different – its use of physics gave players new and fresh gameplay that they never experienced before. Physics-based puzzles, face animations, first-person cutscenes, and the gravity gun – these are just a few examples of things that HF2 not only introduced but mastered. And one should also not forget about the game’s story, which was incredibly polished and believable.

If you love both Halo and powerful mechs, there’s one game you should definitely give a try if you didn’t already – Titanfall 2.

Titanfall 2 focuses on large armored mechs and allows players to control both their own combat unit and the robot’s pilot. 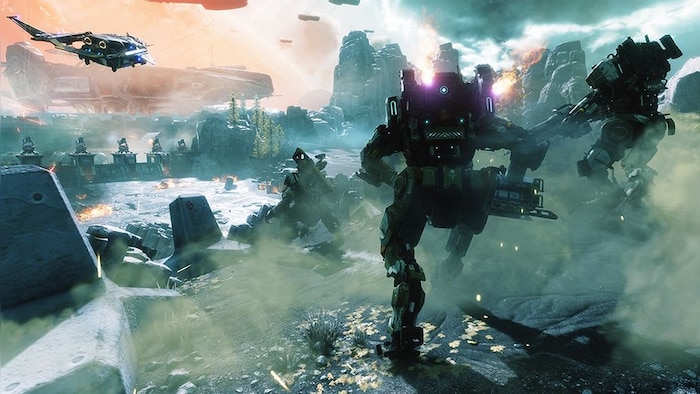 The game features both single-player campaign and multiplayer mode, where you will be able to test numerous mechs and utilize their impressive guns to cause chaos and destruction. Despite not being as successful as it was meant to be on release, Titanfall 2 wasn’t abandoned – instead, the development team released more content and updates over the years, and judging by overwhelmingly positive reviews on Steam, their efforts did pay off.

Did you ever wonder what the world could look like if Nazi Germany won the Second World War?

Now you’ve got the opportunity to experience it all yourself. Wolfenstein II: The New Colossus is a first-person shooter that will take you to an alternate history, where Nazis managed to finish Wunderwaffe, a wonder weapon, and successfully used it to win the war. 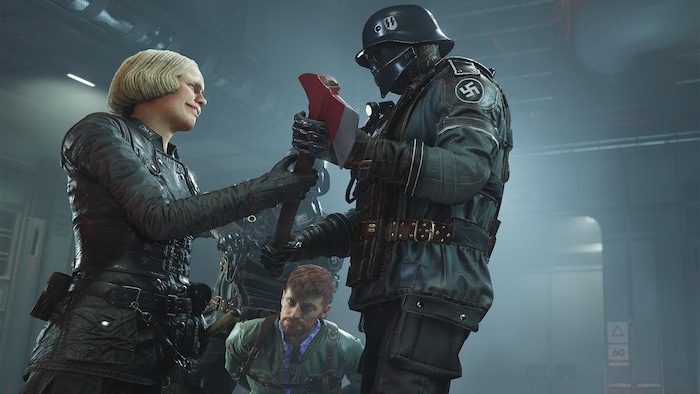 Now the regime is spreading across the world, threatening the mere existence of those who don’t agree with their methods and ideals. As William “B.J.” Blazkowicz, you will be tasked with combining forces with resistance leaders and hopefully drive Nazis out of the United States. Doing so won’t be easy, but you’ll have a wide choice of deadly weapons at your disposal, which should help you to complete the objective.

For the last game on the list, we’ve got something special – a game, where one of your weapons will be time itself. Singularity is an interesting choice, especially if you’re looking for a Halo-like game.

It revolves around a certain mysterious event that occurred in 1955 on a secluded island in Soviet Russia – an event, that caused some disturbance recently, so further investigation was needed. 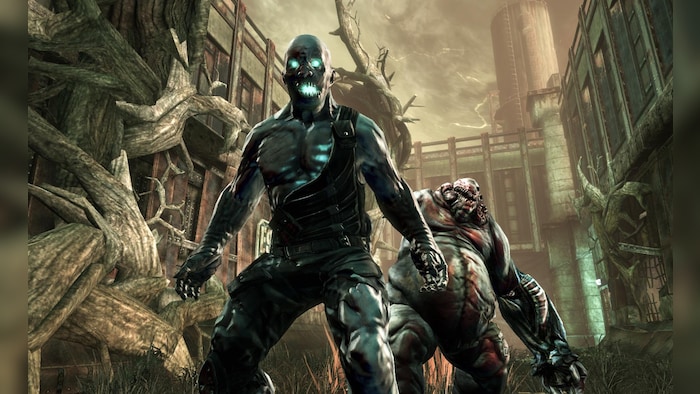 As the game progresses, you will get access to the weapon that defines Singularity as a game – a Time Manipulation Device that can be used to your advantage by manipulating time itself. You can, for example, age your enemies or certain objects, renew them to their original state and even manipulate gravity, which creates a very one-of-a-kind gameplay.

Halo became one of these video game series that most players know about, even if they didn’t have the opportunity to play it. Adventures of Master Chief and his AI companion, Cortana, and their struggle against the mysterious Covenant, gave life not only to a number of clones and Halo inspired games, but also to a variety of merchandise, from shirts and caps to pins, buttons, magnets, and, of course, action figures.

Because of how popular the series is, it’s quite possible that you’ve already played it to the point, where there’s no stone left unturned. In that case, you may be wondering if there are some cool Halo type games to try. Check out the list above and you’ll quickly find out, that there are in fact some interesting choices – pick your favorites from the list of some of the best games like Halo and enjoy the fresh experience.