Video games are fun, usually. If they weren’t, we wouldn’t be spending so much time staring at colorful pixels for hours on end. Sometimes, however, it would be nice to have our admiration for a game be clear and visible even when the power is out. Physical distribution isn’t as common as it used to be back in the day, so we have another recourse.

Video Game Collectibles as a Christmas Gift for a Gamer?

Physical stuff is always welcome unless you have very limited space in your apartment or room. Better still, it looks cool and fun even to somebody who couldn’t care less that you soloed Arthas or something. Physical video game collectibles are simply great for presents!

What kinds of stuff can you get to put on the walls or on your shelves, or give to that special nerdy someone in your life? Let’s see what’s up for grabs.

Figures (action or otherwise), miniatures, and other effigies of pop culture’s most beloved characters have been popular for decades, even before the onslaught of 1980s cartoons made mostly to promote them. And it isn’t hard to see why.

These things look cool. Sure, for the most part, they just gather dust, especially if they’re not action figures and can’t really be played with or posed, but nobody’s going to tell me that a 10-inch statuette of Batman or Master Chief standing proudly on a shelf doesn’t look awesome.

There are, in general, two kinds of these figures: static and articulated. Static ones are just there, looking pretty. You can’t manipulate their limbs, but on the other hand, it may allow for more detail or style. Sometimes you may get an extra set of accessories, so you could, for instance, put a different helmet on, or equip a different weapon. 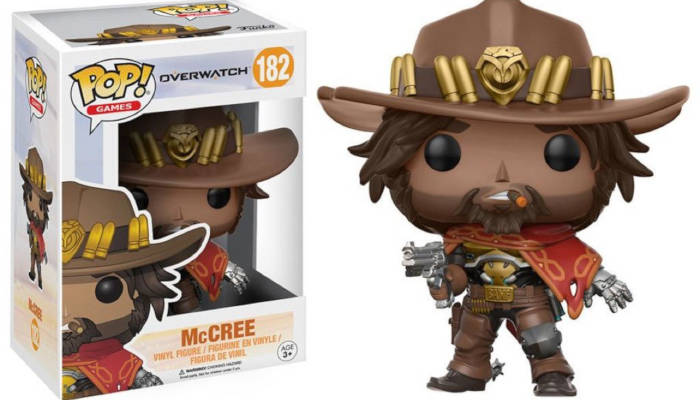 A good example of static figures is Funko Pops. They are very stylised, all made using the same template, but they have a lot of charm and come from all sorts of fandoms. So unless your giftee is into something obscure, you’re likely to find something in the official catalog. If not, there are fan builds you might be able to find and purchase on the Internet. Regardless, Funko Pops are charming, cute, and friendly-looking, even when they represent some not particularly nice characters.

Then there are full-blown articulated action figures. You can pose them in any way their joint will allow, and, depending on your giftee, you might find them looking incredibly badass, or incredibly silly. Of course, the best ones can cost a pretty penny, but often look simply amazing.

A CS:GO player would love it

Figurines are fun, but sometimes you may want to go one step further. That’s where replicas of objects from pop-culture come in. Be them swords from movies or comics, weapons from video games (like knives from Counter-Strike, if that strikes your giftee’s fancy), or anything else (who wouldn’t want a Palantir from Lord of the Rings?), these things look great.

And they close the gap between fiction and reality. It’s one thing to have a figure of a favorite protagonist, it’s another to have their life-sized weapon up on your wall.
These things aren’t cheap, but if you can afford them and have a good sense of what would make your gift recipient happy, go for it!

Chunky memorabilia like the ones above aren’t always necessary. Sometimes something smaller, but more cheeky, or just better suited for your giftee’s tastes is just fine.

There’s a wealth of geeky gadgets available, including various mugs inspired by pop-culture, keychains, pins, chalices… All you need to know is what the person you want to buy a Christmas gift for is into, and what stuff they don’t have yet.

The “Other Collectibles & Gadgets” category on G2A Marketplace is a veritable smorgasbord of geeky gift ideas, and you’re bound to find something worthy of being a Xmas gift for someone you care about.

When all else fails, how about a nice gaming poster? They couldn’t take up less space (assuming your gift’s recipient has enough uncovered wall surface), and offer virtually endless possibilities. There is an expansive gallery of officially licensed posters from all over the pop-culture, but you could always go for a personal touch! Compose your own image (or commission it from an artist) and print it yourself if you really can’t find anything (although it’s quite unlikely).

Do you want it gift-wrapped?

Did we give you have a better idea what can you get your gamer family member, friend, or SO this Christmas, other than games? In the long run, physical swag lasts for much longer, and keeps impressing years later, while games themselves are transitory.

So what are you waiting for? Jump into the Merchandise or Christmas Gifts category on G2A.COM and see which from the rich assortment of collectibles and toys are something your gift recipient would love to get this winter.