Video games are usually remembered for being either exceptionally good or exceptionally bad. And what if that game was the latest installment of your favorite franchise?

Then you may either praise the developers for their efforts in keeping the series amazing or blame them for not being able to meet your expectations and for ruining the series you loved.

But the failed game is not the end of the world – sometimes companies listen to the feedback given by players and then they come back with a new installment that brings the series back on the right tracks. Today we’ll take a look at several titles that saved their gaming franchise.

Although God of War series can’t be really considered unsuccessful, it had several entries that some players could see as not being up to high God of War standards. Thankfully, with God of War from 2018 no fan of the series should worry about the franchise’s future.

The game focuses on the Norse mythology, unlike the previous games that were based more or less on the Greek one – fans of the series know that even the protagonist, Kratos, is the former Greek god of war. This time you will be tasked with fulfilling the last wish of Kratos’ deceased wife, which is spreading her ashes in a very special place, the highest peak of the nine realms. Together with Atreus, Kratos’ son, you will journey vast dangerous lands, and challenge Nordic gods themselves. Are you ready for the challenge?

Who doesn’t know the story of Spider-Man? One day some guy got bitten by a spider, gaining some spider-related powers in the process and now he has to protect the city from wrongdoers.

Spider-Man surely had some games that were not as successful as the other entries from the franchise, but the new game from 2018 made it clear that Insomniac Games knows exactly how to properly make action-adventure titles. The game takes you to a fictionalized version of modern-day New York City, where you will face some of Spider-Man’s greatest enemies.

Gameplay puts emphasis on dynamic combat, so your character will be able to swiftly move, throw web, and dish out devastating blows in a blink of an eye, neutralizing confused thugs and bandits before they know what hit them. Spider-Man is one of Marvel’s most popular characters and this game truly does him justice.

First Doom game was released back in 1993 and it was an incredibly successful one, mainly due to how innovative it was. In later years it also gained a lot of praise for how much influence it became for the entire FPS genre.

The original game was followed by two major releases and then the franchise became silent, not counting the spin-offs. Doom from 2016 is the first major entry since 2004 and acts as a reboot of the seemingly forgotten series.

Developers did their best to capture the spirit of the original while setting the game in a much better-looking environment. Brutally effective weapons, power-ups, and fast-moving demons – the core of Doom at its best. Visually stunning and with tons of dynamic action going on, this title is a perfect example of an excellently executed reboot of one of the most famous game franchises.

Tomb Raider is an incredibly successful franchise that started back in 1996 but received a lot of attention lately due to the new titles being released. The new era of Lara Croft games began in 2013 with a game called simply Tomb Raider.

Crystal Dynamics took the reboot route and went to the roots of the series, showing the story of the 21-year-old miss archaeologist before she became a battle-hardened adventurer. New Lara is young and naive, not yet aware of what dangers and challenges await her. In the game from 2013, she will desperately fight for survival on the Yamatai island, leaving puzzle elements, for which the series is best known, behind.

Developers managed to create a very likable and realistic character you can’t not sympathize with. It’s up to the point every time she gets hit in a cutscene you feel sorry for her and wish she didn’t have to suffer that much. Poor girl.

Call of Duty had its ups and downs, but with Call of Duty 4: Modern Warfare those who turned back from the series, finally had a reason to come back. What makes the title so different is the fact that developers decided to switch from the usual World War II setting to modern times.

The change met with critical acclaim – it was considered a breath of fresh air the series undoubtedly needed.The final product won numerous gaming awards, showing that sometimes taking the risk and doing things differently pays off.

Gameplay-wise it’s still an FPS, but now you will have modern weaponry at your disposal, from handguns to assault rifles and rocket launchers. Much praise was given to the game’s multiplayer mode that received multiple changes and quality-of-life features.

Fallout is a legendary video game series – games from the franchise are usually praised for their open-ended gameplay and flexible character-leveling system that make it easier to find a playstyle you will be comfortable with.

Not all Fallout games met with a hugely positive response from the gaming community, especially Fallout: Brotherhood of Steel, but all sins of the development team were cleansed with the release of Fallout 3.

What made this game unique was the use of 3D graphics – a risky move that doesn’t work well with all games, but in Fallout 3 it did a remarkable job and made the series fresh again.

Nintendo 3DS owners are probably familiar with the Fire Emblem series as it started back in 1990. It’s still developed, however, with major releases appearing every few years on average.

As of 2020, there are over 15 installments of the series – for such a huge franchise it would be virtually impossible to spit out only flawless productions. But no matter how much a certain game negatively deviates from the standards, it’s all irrelevant, because of how good Fire Emblem Awakening is.

For the first time developed for Nintendo DS, it lets you control a party of characters, each with unique abilities – the key to victory lies in using available skills in such a way that they will benefit your team the most.

While we’re at games developed for platforms other than PC, let’s also take a look at Metroid Prime. What makes this particular game unique when compared to other games from the Metroid franchise is the fact that it’s the first title to use 3D graphics and plays from the first-person perspective.

This makes it yet another game that not only didn’t suffer after switching from 2D to 3D but also resulted in giving the series a new life. The game is focused on adventures of Samus Aran as she battles the Space Pirates – the game features futuristic setting, so beam weapons, sci-fi power-ups, and scanners used for finding enemy weaknesses are not an uncommon sight.

Most of the time you will be exploring claustrophobic caves and rooms trying to find a way to the next location and occasionally killing dangerous creatures in the process.

Wolfenstein: The New Order is yet another example of a game that saved its franchise. The series that was best known for its first games, including Wolfenstein 3D and Return to Castle Wolfenstein, received a well-made modern production meant to introduce a new generation of players to the series.

And it did its work surprisingly well, as the game met with a positive response from the gaming community, even winning several awards in the process.

The title takes you to the 1960 and an alternative version of history where Nazi Germany won the Second World War. However, the fight is not over yet and it will be your job to stop Nazis from completely dominating the world.

As a final entry on the list, we’d like to recommend Mortal Kombat X that marked the return of one of the best fighting series. 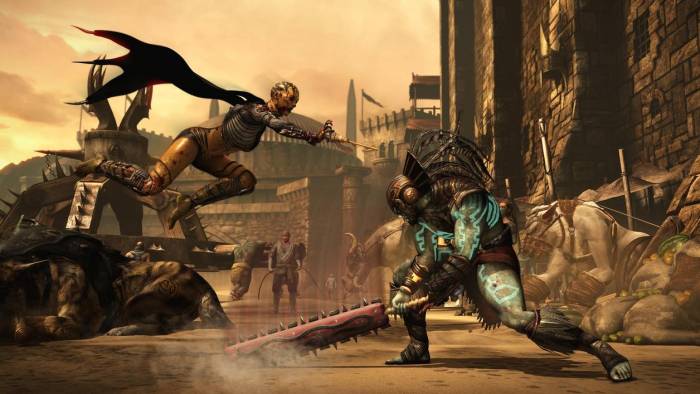 The game reintroduces several important gameplay changes seen in the previous installment, such as powerful x-ray special moves that allow players to perform brutal attacks and let them see how their attacks break the opponent’s bones in slow-motion, adding even more brutality to an already gruesome production.

The title features dozens of playable characters, some of which are entirely new in the series, like mercenary gunslinger Erron Black or daughter of Sonya Blade and Johny Cage – Cassie. Combined with the most brutal fatalities in the series and 1080p graphics, you’ll surely find yourself sink into this new take on the classic arcade game.

Not all games are amazing, and if the poorly executed title is a part of a franchise it can have negative impact on the entire series and may lead to raising distrust to the company. But sometimes companies are listening to complaints – with help of the feedback given by the community developers are able to make their series great again.