The First World War was a unique conflict for many reasons, first o them being that it introduced the world to the idea of trench warfare. Staying put and waiting for the enemy move was as much a part of the WWI soldiers’ life as fighting on no-man’s land. Due to that less active type of conducting combat, it could seem that FPS games based on the Great War would be quite dull. Well, not really.

Let’s take a look at the best first-person shooter games based on World War I and see how they tried to solve the problem of trench combat.

With plenty of customizable weather conditions and a variety of moddable guns, Grunt1914 manages to stand out slightly beyond its barebones multiplayer FPS action. 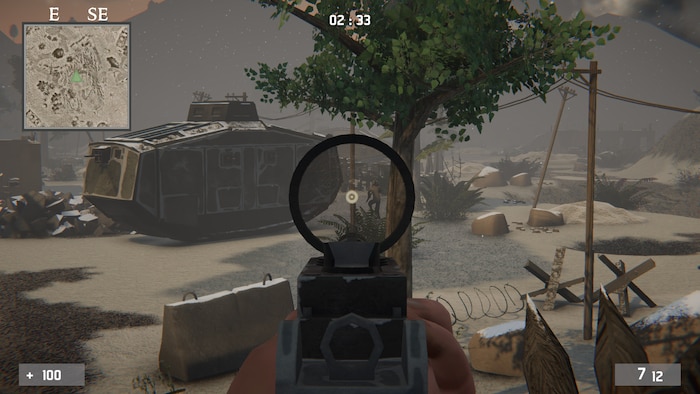 Let’s be honest here – Grunt1914 is not a masterpiece of game development. If a player is looking for a multiplayer first-person shooter title, there are plenty of others that are way better than what Aligned Games has to offer. But, somehow, it’s hard to deny this game its charm, and there are plenty of things that it does good. Let’s take a look at them.

First and foremost, the maps are quite large, if a little bit empty. But the emptiness is quickly compensated with what is going on in the virtual battleground. One of the main selling points of Grunt1914 is that the player can adjust weather conditions and time of day. And doing that affects the gameplay. Rainfall and blizzards effectively restrict visibility and reduce what the player can hear, forcing them to act carefully to not bump into an enemy by accident. The same goes for the time of day – World War I soldiers couldn’t use night vision goggles, so playing in the dark might make locating enemies a challenge.

The other strong point of Grunt1914 is the number of available weapons. The player can choose from a variety of pistols, revolvers, rifles, submachine and machine guns, grenades, and even different melee weapons. The developers put a lot of effort to make them as close to the real deal as possible. Like in many other multiplayer FPS games, the player can equip their tools with various attachments, such as scopes, bayonets, etc., and change the weapon skin.

Grunt1914 was met with solid reviews. Fans noted the large variety of weapons, available maps, and adjustable weather conditions as the strongest points of the title. Reviews pointed out to the feeling of nostalgia caused by the title’s similarity to early first person shooter titles, such as Medal of Honor.

Rife with intriguing ideas and an interesting setting, Iron Strom proves that World War I games don’t have to stick to close to reality to be decent entertainment. 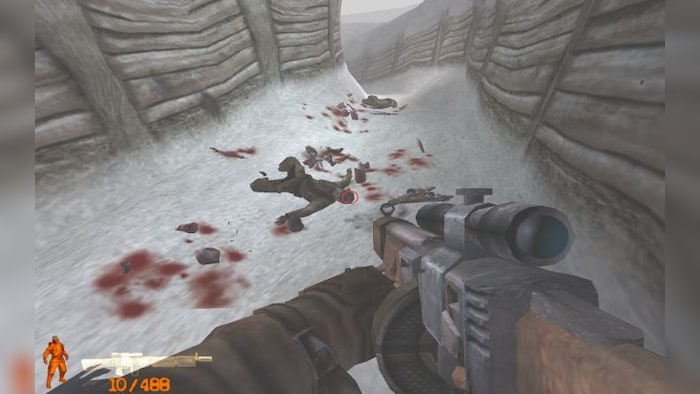 The story premise of Iron Storm is simple – World War I never ended. Baron Von Ugenberg, a famed Russian general, seized the territory of Mongolia from the Chinese. Using the chaos caused by the Russian Revolution, he took control of the country, establishing the Russo-Mongolian Empire. The free nations of Europe, aided by the United States, formed the United States of Western Europe, aiming to stop Von Ugenberg’s ambitions. The Great War, historically over by 1918, stretched way into the second half of the 20th century. In 1964, the protagonist of the game – a legendary soldier James Anderson – is sent on a mission to stop the Russo-Mongolians from developing a potential doomsday device.

The plot is paper-thin and serves no other purpose than differentiating the game from other action-shooters of the early 2000s, most of which were set during WWII, ad allowing the player to use various weapons that are way too advanced for the early 20th century. The player controls Anderson throughout numerous locations, fighting against enemies in a pretty straightforward FPS gameplay. The game is known for its difficulty level, which leaves the player dead after only a few shots, and glitchiness, which adds to the difficulty. For example, enemies tend to clip through the walls and survive a hail of lead fired in their direction, among others. Some might find it frustrating. Others might jump at the challenge of fighting not only against the Russo-Mongolian soldiers but also the game’s bugs.

Despite plenty of bugs and glitches, Iron Storm received a positive reception from the critics, who generally praised the what-if setting of the game.

NecroVisioN brings the hell of the Great War to the actual Hell, in a combination of supernatural setting and FPS gameplay mechanics. 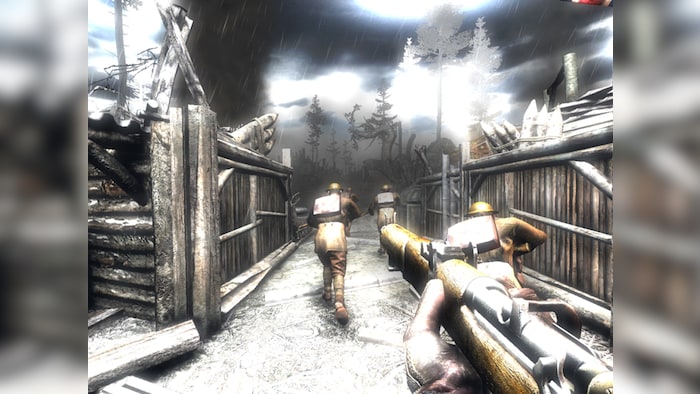 We’re not sure what makes the marriage of great conflicts with supernatural scenarios so enticing to the masses. As seen in the Wolfenstein series, which capitalized on the Fuhrer’s obsession with occultism and dark magic, such combinations can bear pretty decent fruits. That’s probably why the developers of NecroVisioN decided to go the way they did and bring the monsters from Hell to the hellish fronts of the Great War.

The story of the game takes place in 1916, a year of the infamous Battle of Somme. Simon Bunker is a young American soldier who joined the ranks of the British Army fighting against the Germans. On the day of the battle, a mysterious cure spread across the battlegrounds, infecting the dead and the living soldiers alike. The infected quickly turned into monstrous zombies and attacked, without discrimination for allegiance. Simon will have to face the demonic hordes on the battlefield and beyond, venturing further and further into the darkness to discover the secret behind the plague.

The game’s mechanics combine the use of firearms and spells to fight against the demons. The player can use a variety of WWI guns, like rifles, machine guns, pistols, etc. Dual wielding is available for some weapons, providing more firepower against the monsters. Bunker can also learn spells to use in combat. The player can also use spells, called Shadowhand skills, to fend off demons. Using a special gauntlet, Bunker can use various powers like telekinesis, throwing fireballs at enemies, and more.

Aside from the single-player campaign, NecroVisioN features a multiplayer with plenty of modes, like team deathmatch and free-for-all.

We abandon the realm of the supernatural and focus on a more realistic representation of trench warfare in Verdun. 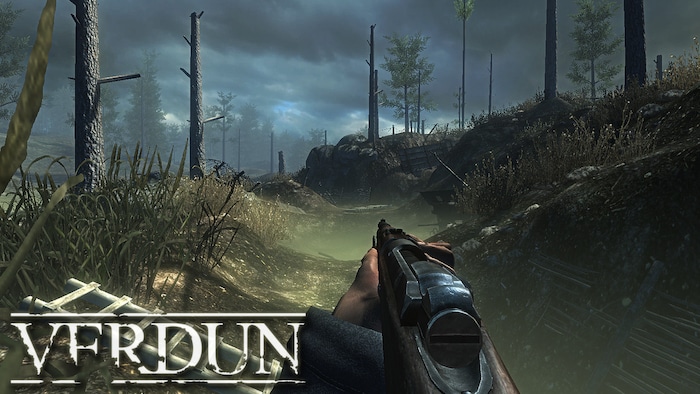 Verdun’s gameplay mechanics share some similarities with that of the Battlefield series. The title focuses on multiplayer battles of up to 64 players, divided into factions. The game offers four different gameplay modes. In Frontlines, the players take turns in capturing and defending sectors of trenches. Attrition Warfare focuses on chipping away at the enemy faction’s numbers with each kill. Squad Defense is a cooperative mode in which the players fend off waves of AI opponents. Rifle Deathmatch, as the name suggests, is a free-for-all battle between players armed only with rifles.

The unique trait of Verdun is the function of NCO in the player’s squad. The NCO can provide their teammates with various skills, both passive and active. The active NCO skills include calling in air support, artillery fire, and smoke screens. Passive skills are useful in giving the teammates an additional edge in battle by enhancing their skills. The team members can level up by successfully aiding each other in combat.

Verdun received critical praise for its realism and more paced and tactical approach to combat, a welcome change from action-focused and flashy multiplayer first-person shooters.

The Battle of Tannenberg, fought in 1914 between Germany and Russia, saw a complete victory of German forces and was one of the most critical battles on the Eastern Front of the Great War. The player will be able to relive these events playing as one of the sides of the conflict in Tannenberg, a multiplayer FPS from the creators of Verdun. 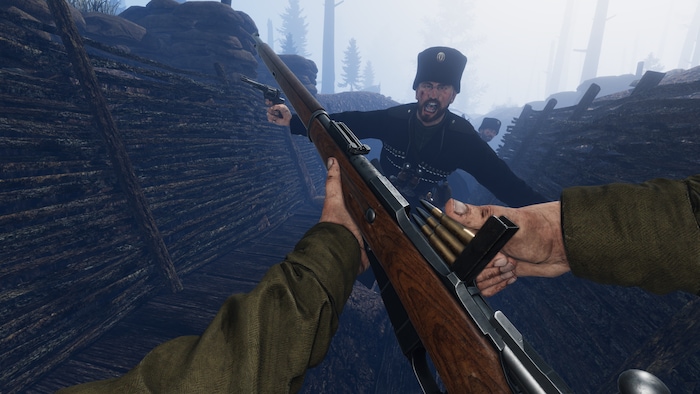 As a spiritual sequel to Verdun, the previous game from the studio, Tannenberg is probably one of the most detailed depictions of the Great War combat on our list. The development team at M2H did a marvelous job bringing to virtual life soldiers, weapons, and sceneries of one of the most gruesome battles of World War I.

Above all other aspects of the gameplay, Tannenberg emphasizes realism. The player will be able to use over 50 types of period-accurate weapons while fighting in seven, meticulously recreated maps. The maps feature a variety of battlements, trenches, vantage points, etc. to provide the player most authentic experience.

The Maneuver mode is a unique gameplay mechanic of Tannenberg. It adds an element of strategy to the game, forcing the player to plan their actions to the changing battlefield situation. In Maneuver mode, the player is tasked with taking over specific points on the battlefield: ammo depots, lookout points, etc. The more points the player takes over on the map, the faster they can overwhelm the enemy and drain them of their resources. Aside from that, the game features the Attrition War and Rifle Deathmatch modes from the previous title.

Tannenberg was met with generally positive critical reception. Reviewers praised the improvements the developers made over their previous title, Verdun. The reviewers likewise praised the tactical approach and realistic presentation. . 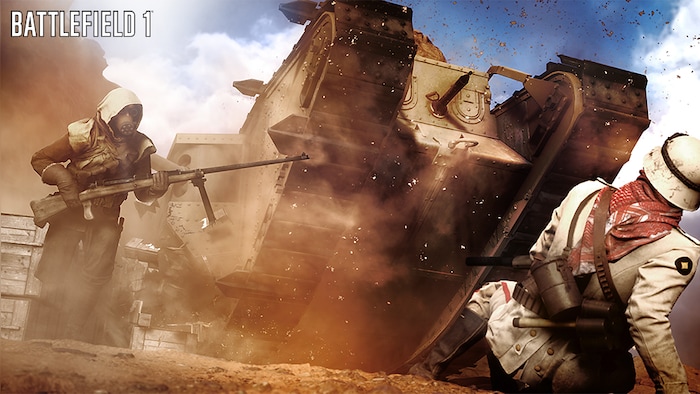 The settings of Battlefield have taken the players from World War II frontlines, through modern-time urban warfare, to futuristic scenarios. It was about time that EA DICE tackled the subject of the “war to end all wars”. And while Battlefield 1 does it’s best to do it’s setting justice, the game still manages to be an action-packed multiplayer shooter the fans of the series have grown accustomed to.

Unlike many previous titles in the series, Battlefield 1 doesn’t focus solely on the multiplayer. The 1 features a short campaign mode called “War Stories”. In War Stories, the player is put in the shoes of soldiers fighting on different frontlines o World War I, from Europe to Africa. These stories are an exciting addition to the game, but the main course is still multiplayer. The developers pull no punches, throwing the player right in the middle of high-octane action. Among the many modes available in BF 1, the one worth mentioning is the Firestorm, a battle royale where the players face each other on a map surrounded by a literal storm of fire.

Battlefield 1 was met with critical and player acclaim. Reviewers and fans of the series praised the game for staying true to the fast-paced gameplay style and for the variety of modes available in the game. BF 1 won, among others, Games Critics Awards for the Best Game of 2016.

As you can see from our list, plenty of developers found the way to find the trench warfare of WW1 an exciting gameplay experience. Whether realistic or not, set in an alternative history or based on historical battles, the FPS games set during World War I can be as engaging as those set against the backdrop of more contemporary conflicts.