You know… I’m just tired. Steam has seen a fare share of crass games, most of them capitalizing simply on shock value to gain notoriety. Most of them simply get drowned by the sea of other games that try to do the same and you have NO IDEA how big that sea has become. 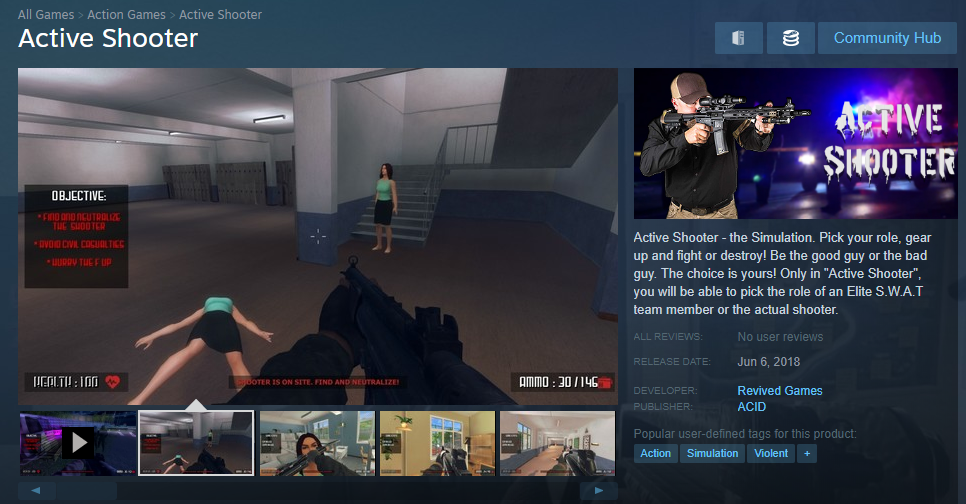 And yet here we are again. Active Shooter is the name of today’s culprit– a small, by and large painfully unoriginal and pointless game. Essentially a monster cobbled from store-bought assets with an edgy name. The offensive thing? It lets players pick up the role of the titular active shooter and shoot their way through a school.

Now look, I know this is going to become another battlefield of the honestly hilarious discussion on free speech. I know there will be people quick to defend what by all estimates is simply a bad game banking on shock value because titles like GTA exist. The difference of course is that GTA is a good series of video-games while Active Shooter isn’t.

But honestly? I don’t care. I know I’m quite literally giving the game power by talking about it. But it is useful as a jumping-point into a larger and broader discussion– that discussion being on what games we make, why we make them and how we market them.

After the great VN exodus of 2018 I really need to state this outright: we NEED to have a conversation about this. Not just about Steam and how Valve is bad at curating its storefront, we need to talk about video-games themselves.

And while I have no easy answers, we need to start somewhere, you all know it as much as me.