At long last, what we all hoped for and for the most part openly expected, finally happened. After being teased for months with the Tender app, which matches people based on their blood types and an entire ARG dubbed “Trust no more” (a fascinating subject in its own right, I encourage you to research this further), the long-awaited sequel to what is commonly considered to be one of the best RPGs of all times, has been announced.

With a trailer to boot. Which I’m putting below. Trigger warning: blood. Lots and lots of blood. Quantities of blood too large to be reasonable. A veritable tsunami of blood.

This amount of blood would be comical, were it not played so straight. I was sold at the Shining-esque river of blood filling a dark corridor, but the actual tidal wave of blood was something of an overkill. Nevertheless, it’s hard to expect anything less from a Bloodlines game, the World of Darkness can be surprisingly campy at times. It never grew out of its angsty, Hot Topic roots, it just now looks at them with nostalgia.

Speaking of which, it’s officially licensed, so the pen & paper RPG fanatics should expect full canonicity (a failure of holding to which will be met with hostility from said fanatics, I’m sure). Which means we’ll likely again get to play as one of the classic Vampire Clans and we’ll have a host of familiar powers to work with.

Though I certainly don’t remember telekinesis to be one of those, I don’t know where that came from. Then again this is affirmatively not actual gameplay, so maybe this is just for show. I hope however that the first-person perspective stays. I can see it working for Cyberpunk, it should work here.

And that reminds me, Bloodlines 2 was announced for 2020 and the big hope is that that will also be the year of release for Cyberpunk 2077. 2020 is shaking up to be a pretty good year for single-player RPGs. 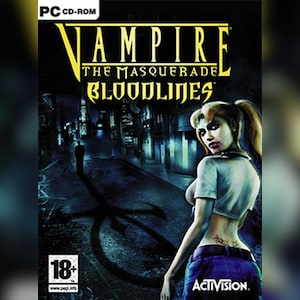