Rescued from a cross, you have to find a way to survive, build a shelter and regain your power.

The golden days for Funcom are now a memory. With huge budgets the studio flourished during the development of the Age of Conan: Hyborian Adventures MMO. Now, as developers admit themselves, it’s a much smaller team and its task is to adapt and focus on much more creative and unique projects.

The good thing is that Robert E. Howard’s universe was always deep in their hearts, and Conan Exiles is a result of that love. The upcoming title is an open world survival game with light RPG elements. It’s mostly inspired by the books and stories, but people familiar with films and comics will surely notice some nods and references as well. It will be published via Early Access because Funcom’s team wants (besides the early funding) to develop the game with strong influence from the community.

You can play Conan Exiles solo, in local play, but the fun begins with other players – on the official servers or rented ones. The character creator appears to be much deeper than in other survival games. Various options to edit your look will be available, as well as options to change race, voice, and even religion. You literally start your game crucified and three random crimes are assigned to you. Some are serious, defining the background for your character. Some are silly, making us wonder if we actually committed these crimes. And you start with nothing.

Your early tasks are to find water, then food, and finally shelter – these elements exist throughout the whole game. To build a small stone shelter you’ll have to create simple tools. By trial and error you’ll learn the rules of Conan Exiles’ world. Everything is based on gathering and advancement, as various structures and items have their levels and tiers. The time will come that you’ll get a chance to create some vanity items – e.g. trophies or furniture. But don’t drop your guard. Even the strongest sword has its durability, and the greatest home will finally fall apart.

There are sandstorms that force you to hide (or to craft a special rebreather mask later in the game). There is a day-night cycle with vicious beasts hunting you after midnight. And the further you go North, the more dangerous it becomes. There are even dragons for you to slay if you are aiming for some real challenge.

During your journey you’ll be tasked with enslaving NPCs – thralls. They are needed if you want to get the best items available. For example some thrall artisans will give you access to Cimmerian weapons. Others will turn out to be great archers. After you break those NPCs on the Wheel of Pain, they become your servants. And as a result you become capable of building a base fully protected by a small army.

But even if you have to run around with truncheons to knock out NPCs, combat is much more essential element in Conan Exiles. It’s very tactical, you have to measure your swings and thrusts. Wait for an opportunity to take advantage of your weapon type. Fights with two-handed weapons are different to those with one-handed sword and shield. And you’ll quickly learn what playstyle suits you as you can dodge enemy swings as well, with blocking being a critical skill as well.

The world of Conan Exiles is brutal as you commonly split enemies’ bodies. But your survival comes with a cost – you are being driven insane with time passing. To get rid of this corruption, you will have to recruit thralls so they will dance for you to fight off evil spirits. Besides, religion is an important aspect of the gameplay. If advanced properly, you will be able to construct altars of Mitra, Crom, Set or Yog, four gods of the Conan’s universe. They are not there for decorative reasons. Most powerful players will be able to summon their aspects and use them against enemies.

Conan Exiles is set to release in Early Access on PC on January 31st. Xbox One Game Preview is planned for Spring 2017. 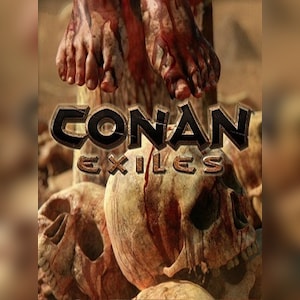