The Sniper Elite series is the kind of game that never became very popular, but was quite content in its niche and has a dedicated fanbase. Created by Rebellion, a seasoned developer, it offers one of the best sniper simulations available on the market. Sniper Elite is up to three core entries so far, and three Nazi-zombie related spin-offs. Ever since Sniper Elite II the games feature their now-trademark feature: killcam, which rivals the Mortal Kombat quasi-reboot’s X-Ray with its gory details. It is enough to say ‘testikills’ are a thing in the fanbase and lets leave it at that. And it seems that the next entry, Sniper Elite 4, is going to be bigger, better, and with more body-bursting projectile action. We have gathered all the things you must know about Rebellion’s upcoming release.

Sniper Elite maps weren’t known to be small, exactly, but they didn’t offer a true long-sniping experience, either. The fourth core game aims (pun not unintended) to change that. Developers boast that the smallest map in SE4 is going to be 3 to 4 times as big as the largest map in the previous game. It remains to be seen how true it is, but judging by a gameplay video from Eurogamer’s visit to Rebellion HQ the boast holds a lot of water (skip to 53:00 to see the level through an unbound camera). The level is not only beautiful, but also huge for a rather simple scenario of blowing up a bridge. What’s more, now instead of sun-burned locales of Africa we get to visit Italy, aiding the local resistance. Which means charming architecture, nice mountains and, probably, many bridges to clear.

Are the guns up to task?

It is unclear how powerful the rifles in the game are going to be, especially given the time period (the game is set in 1943). Personally I hope the game maps will let us recreate some of the longest confirmed and recorded kills in history. For those curious: the record is held by Craig Harrison of Household Cavalry, who took a successful shot at a distance of 2,475 meters (that’s 2,707 yards).

Much larger maps bring a certain problem: moving around. The larger the map, the more transportation options are necessary. Sniper Elite 4 addresses it by improving the main hero’s mobility. Karl Fairburne will now be able to climb, move along ledges, and more. It’s not exactly going to reach Assassin’s Creed or Mirror’s Edge levels of traversal, but it doesn’t need to. The expanded mobility is designed to let you reach optimal sniping spots, and it is clearly up to task.

By now seeing the havoc your bullets wreak on the enemies’ bodies is pretty much a trademark of Sniper Elite. Livers bursting, hearts exploding, brains turned into jelly, the games never spared us the gory details. You should be glad, then, that Sniper Elite 4 goes the extra mile to let us learn human anatomy by dismantling it. In addition to bullet-related killcams now we are going to get the same treatment for stealth kills, takedowns, even the shrapnel-kills get their time in the spotlight. So many ways of getting a slo-mo testikill cam!

More ways to get a killcam

To accommodate for this scope of available killcams, Rebellion intends to give us ledge-grabs, more melee, better takedowns… They will even allow us to booby-trap enemy corpses. There are only so many ways you can kill a guy, but apparently SE4 intends to explore them all. More fun for us!

Not so stupid anymore

The AI in the series was not going to get any prizes in the past. It was somewhat improved in Sniper Elite 3, but players still found it lacking. On the other hand, in an interview for Metro.co.uk developers admit that they failed to signal that certain AI behaviors were programmed, not buggy. Either way, the AI in SE IV seems to be a new quality. The enemies are said to be in motion on their patrol routes and react believably to player’s actions, including not abandoning a sweep immediately after a set amount of time. They will also behave differently depending on whether an officer is around to coordinate efforts.

Sniper Elite 4 appear to be on a clear course and Rebellion can work on it as they see fit, since they are self-published now. From massive maps, to improved enemy AI, to more fun ways of eliminating opposition, it is easy to understand why the devs speak of emergent gameplay so eagerly. Being developed for current-gen consoles it also avoid the pitfalls of cross-generational programming that was one of the problems SE3 had to face, since it was developed to work on both PS3 and PS4. All things considered, it’s definitely worth the wait. Rebellion’s Sniper Elite 4 launched on 14 February 2017.

PS: if you pre-order you get to kill Hitler. If this isn’t a good incentive, nothing is. 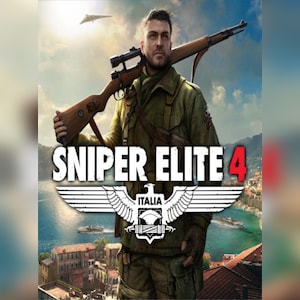