The last of the 2016 Fall season first-person shooters is finally in. After Battlefield 1, Titanfall 2, Call of Duty: Infinite Warfare arrives to grab what’s left of the FPS playerbase. What are the chances it will succeed? Quite fair, really.

When the reveal trailer for Infinity Ward’s latest production arrived on Youtube in May it quickly became one of the most disliked videos in history. At the time of writing this review, nearly half a year later, it still holds a staggeringly disheartening likedislike ratio.

By comparison, the Story Trailer launched in September holds up much better, with a roughly 60-40 split between positive and negative ratings. Which is much more informative, since this is also more or less how the reviews and opinions of the game itself are split.
The fanbase can’t seem to agree whether this game is amazing or terrible, and the critics add to the confusion by the overall consensus that it is all right, but can’t hold a candle to either Battlefield 1 nor Titanfall 2.
Which is true, but speaks more to the praise due to EA DICE and Respawn’s releases than to the detriment of Infinite Warfare. The competition is very strong this Fall, and tightly packed on the calendar.

Long story short, new CoD’s singleplayer remains as much of a spectacle as it has ever been, only now the spectacle plays out across the solar system, instead of modern and slightly futuristic settings.
The protagonist is a certain Nick Reyes, a fighter craft pilot unexpectedly promoted to captain in the wake of a separatist attack. He is little more than the selection of tropes and characteristics expected of the genre, although avoids becoming the always-right, all-powerful kind of protagonist, which is nice and gives him more identity.
Storywise, Infinite Warfare is your typical “good alliance” vs. “bad brutal separatists” we have been seeing over and over again for years, especially in games. Occasional comparisons to Killzone are probably not unwarranted.
Truth be told, the story itself is not overly engaging, and doesn’t do much other than take you from one set-piece to another. It will likely be forgotten due to its villains (Kit Harrington is sadly no Kevin Spacey). The main villain admiral Salen Kotch dubbed by Harrington is a one-dimensional antagonist, with little to no charisma or redeemable qualities. 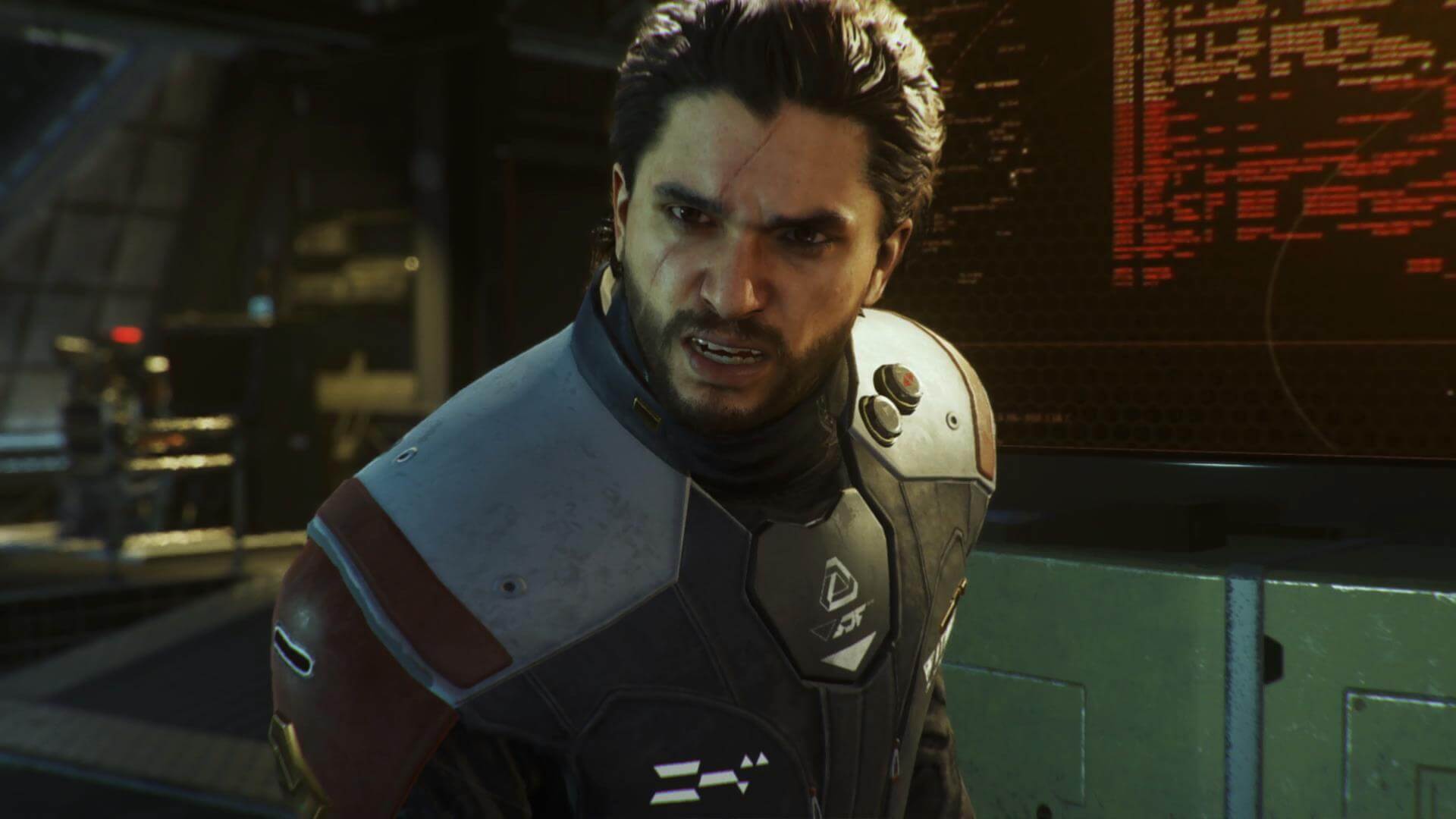 You know nothing, Salen Kotch

Another erratic psychopath, that not only doesn’t hold a candle to Advanced Warfare’s Kevin Spacey (let’s face it, nobody cares about his character’s actual name), but even other erratic psychopaths come out better in comparison. I’m looking at you, Pagan Min.
The story does deserve some merit, however, thanks to that it progresses seamlessly, with every loading hidden in transitions, never quite taking you out of the world. Sometimes it has hints of infamous Mass Effect 1 elevators, but otherwise works really well.

Where CoD IW narrative shines through, is the crew Reyes works with, particularly the combat robot affectionately called Ethan (a more pronounceable version of “ETH.3n”). Ethan in addition to formidable combat abilities introduces a measure of levity and tongue-in-cheek commentary. Other than ETH.3n of most interest is Lt. Nora Salter, a long-time friend of Reyes, and up until his sudden captaincy, holding an equal rank. Their interactions remain dynamic and interesting up until the very end.

Over the course of the campaign players will be thrown into a number of setpieces, which remain Call of Duty’s strength. Zero-g combat while boarding spaceships, brief but entertaining hopping across the Moon in its native gravity, fighting solar-powered enemies on a rapidly spinning asteroid, and more. Infinite Warfare without a doubt takes advantage of the space setting, even if sometimes it fails to recognize which sections should be a more frequent occurrence.
The game offers 7 main missions, and 9 side missions, all of variable creativity and plot importance. They mostly aim to pad the campaign’s length, but they don’t do so forcibly, remaining a tempting option rather than a necessity. Besides, they allow you to complete your hitlist of enemy leaders, a nice, if ultimately inconsequential side activity providing some context to what you are doing. 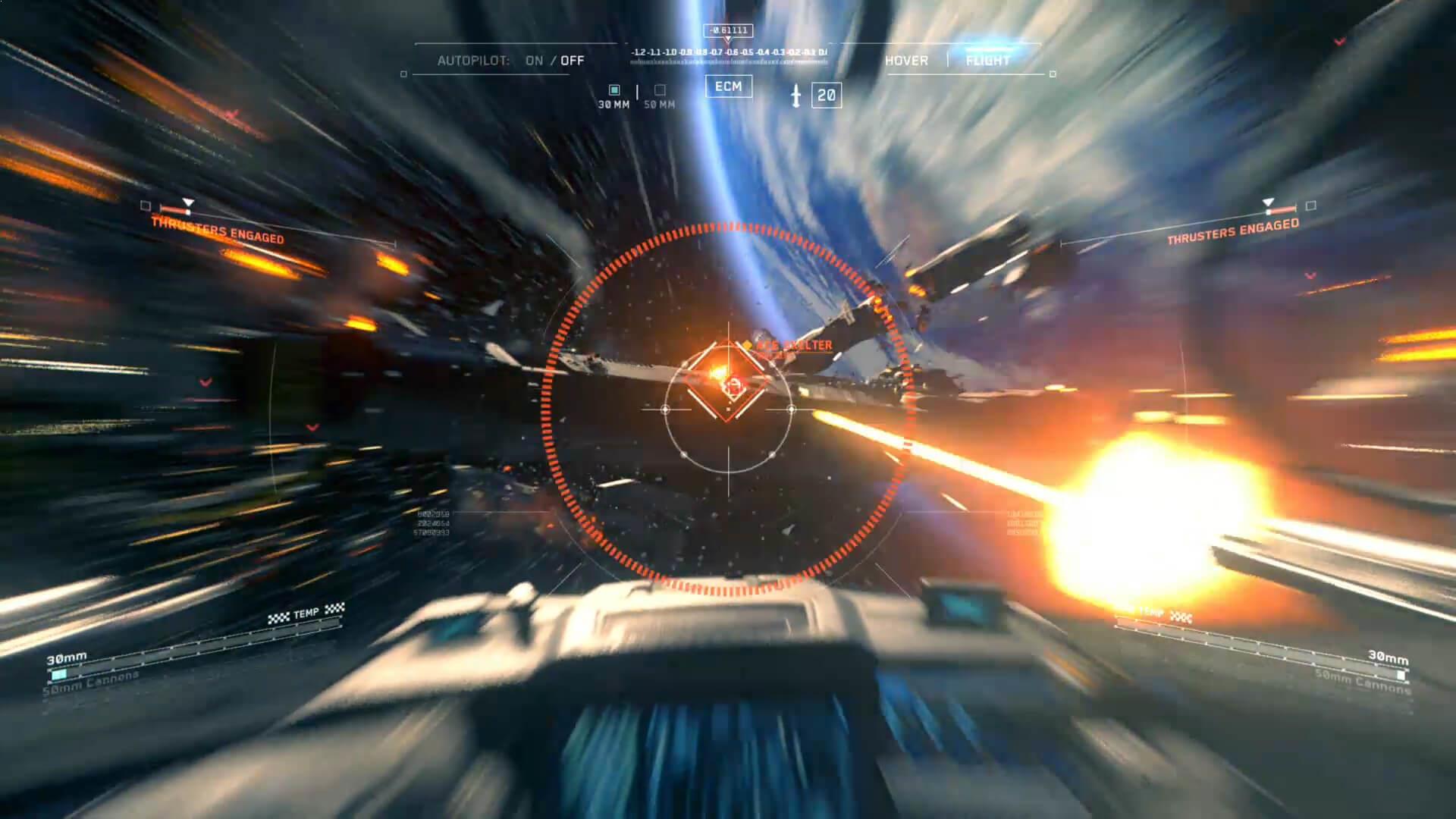 Some of the main and side missions also allow you to pilot your own fighter jet called Jackal in intense dogfights.
Piloting your craft is very entertaining, although it suffers slightly from the limitations, or maybe design principles of CoD IW. As a result you lack any useful minimap to track your targets and the game seems a little bit too eager to go into auto-pilot mode when you lock-on to an enemy, causing a bit of confusion when it happens. Regardless of problems with getting a hang of the open space around the craft, getting to fly around without rails to get you from point A to point B feels very nice.

Let’s be honest: nobody comes to a Call of Duty for its singleplayer, regardless of how good it is. It’s the intense, fast multiplayer that defines Call of Duty’s staying power, so how is the Call of Duty Infinite Warfare multiplayer?
Short version, it’s good, despite its problem. Long version? Let’s take a look.

The place of Specialists known from Black Ops 3 was taken by Combat Rigs, effectively cybernetic enhancement suits. There are six Rigs total, corresponding to some roughly familiar classes.
Warfighter is best summed up as assault class, with high mobility and short TTK. FTL uses hit-and-run tactics, with teleportation and phasing to another dimension. Stryker is a support class, with deployable turret and protective abilities. Merc is the heavy weapons guy, perfect for suppression and defense. Phantom is the sniper class, with Predator-like camouflage, while robotic Synaptic prefers close quarters combat, either with dual SMGs or in melee. 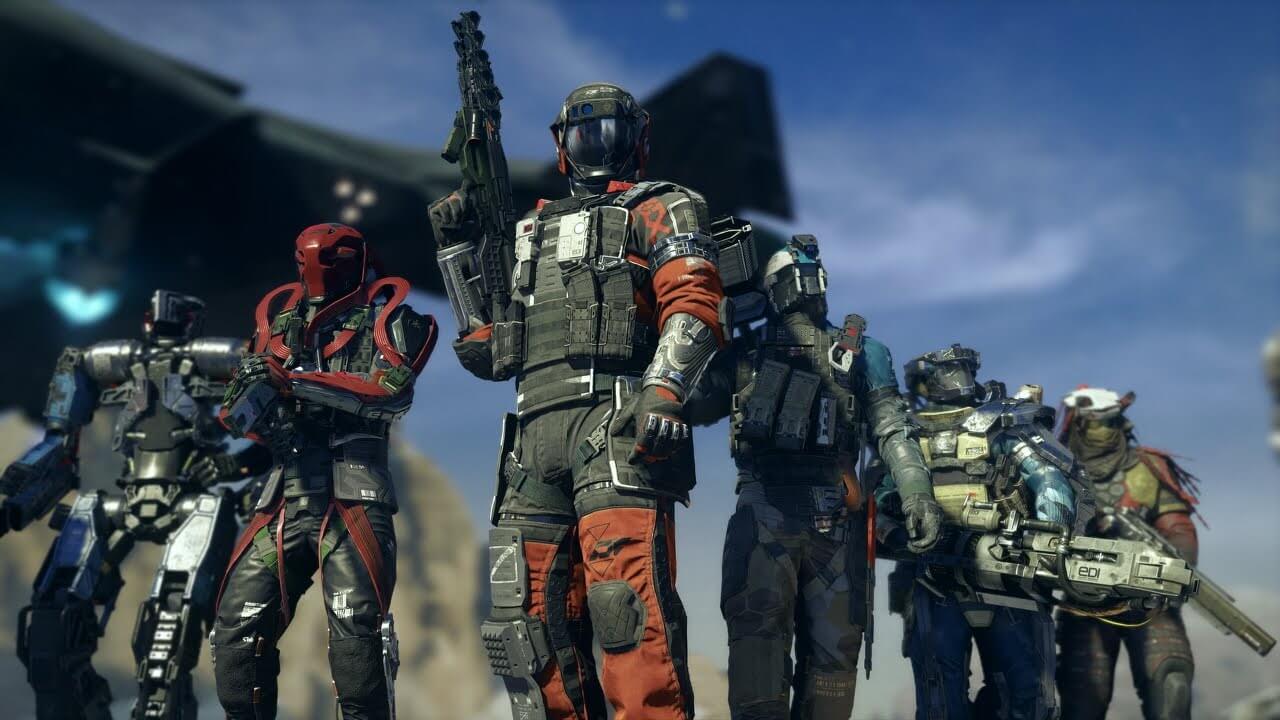 At the beginning only the Warfighter, Merc, and Synaptic are unlocked, the other three are unlocked as you gain levels. This gives clear advantage to players who spent more time with the game, but it does not upset the balance too much, as the unlockable rigs require more experience to use them effectively.
Each Rig has several further customizations in the form of three Payloads to choose from, each granting a new weapon or ability. Similarly, each class has three unique Traits to pick from. As a result there is considerable customization of your soldiers even on the class level, even before counting general perks, weapons or new lethal and tactical gadgets.

At the risk of writing a truism, Call of Duty Infinite Warfare multiplayer offers and expects an approach completely different from both BF1 and TF2. Fragging is the way to play. Support-inclined players, as well as those with a bit slower trigger finger will likely find CoD IW multiplayer a little bit frustrating, because the killstreaks are back in full swing, and the score is very kill-oriented. It is not a fault in any way. If anything, it offers the kind of focus and dedication to a certain style of play that is unlikely to be found in EA’s more broadly welcoming releases. It’s just that it isn’t for everyone, even if the pace in CoD IW multiplayer has dropped slightly from Black Ops III.

CoD IW had significant problems with matchmaking and server population at launch, forming teams almost haphazardly, disregarding player level, which created some lopsided matches. Infinity Ward’s (or maybe publisher Activision’s) odd decision to make the multiplayer peer-to-peer instead of based on dedicated servers causes even more imbalance, but it will hopefully be fixed soon, just as it was for Rainbow Six: Siege some time ago.

Infinite Warfare’s zombie mode, at this point an almost obligatory co-operative part of CoD franchise, is the best it’s been yet, deserving of its own section in this review. Zombies in Spaceland shamelessly satirizes the 80s clichés, down to Paul Reubens (of Pee-wee’s Playhouse fame) as a villain and The Hoff himself as your DJ for the evening.

The characters you play as are just as clichéd as the supporting cast. So much so, that Infinity Ward even cast Seth Green as a nerdy teen in a dorky helmet. It has to be seen to be fully appreciated.
It’s incredibly fun, surprisingly challenging, and makes cooperation not only necessary, but interesting and engaging. The bright colors, upbeat 80s music and a solid gameplay framework make one wonder why nobody decided to make it a standalone. It’s THAT good, easily CoD IW highlight.

From technological standpoint, Call of Duty Infinite Warfare is simply stunning. IW engine was pushed to its limits, giving us a detailed world and lifelike character models, pushing the franchise even closer to a movie-quality. If the progression is kept up, future Call of Duty games (or games in general, really) will be almost indistinguishable from live-action productions.
Multiplayer has no problems with running at 60 fps, providing as smooth an experience as it can be, especially impressive given the overall graphics quality.

Call of Duty is a good game, plain and simple. It is nowhere near as bad as the detractors claim, and while probably not as good as Activision would want, Infinity Ward’s newest child is built on a solid framework, with entertaining, if not very memorable singleplayer. Multiplayer still suffers from sketchy matchmaking and relatively low population, but these are the faults of a shooter-heavy release date more than anything.
While Battlefield 1 and Titanfall 2 offer gameplay open for different playstyles, CoD IW remains a frag-oriented multiplayer, and instead of shying away from this truth, it embraces it fully, doing its own thing and doing it well.
I can respect that, and with this respect in mind, I give it a score of 80100. A solid game, hurt more by the release time than by any fault of its own.

Call of Duty enters the space age with style. Join the raging conflict, fight on foot, and pilot your own spacecraft. Defend the Earth!