When your uncle finds a gate to Hell in his cellar you know it’s time to stop visiting him during holidays.

Tons of games go the Early Access road these days. Many of them are of Kickstarter origin. But it’s really hard to list those done right from the beginning to the end. Darkest Dungeon is an example of such a process. It was an inspiring game when announced. It was entertaining when originally released via Early Access. And it’s a masterpiece now, when a full release has been available for a long time.

Let me surprise you

Created by Red Hook Studios, the game feels like an old good paper RPG. There’s a lot of preparation just to die in two minutes. It’s a roguelike game, but in the manner of XCOM 2 – the core of the gameplay is always the same. What’s random are the levels you’ll visit and the heroes you’ll lead. 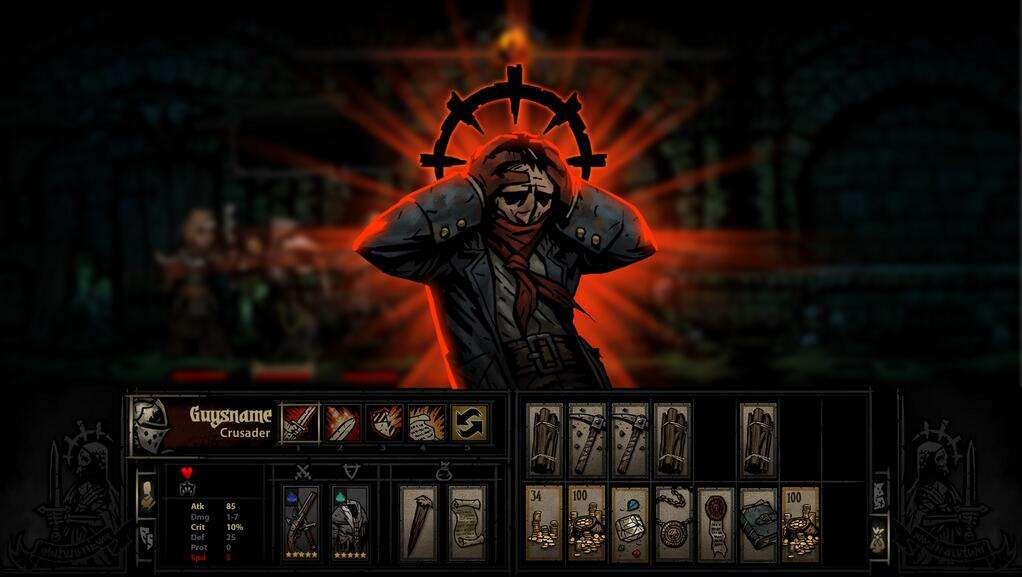 Your journey starts when a relative sends you in a letter. There’s a manor and there’s a basement. And in the basement there’s a gate that leads to dungeons, crypts and ultimately to much, much worse places. Your task is to build a team of four daredevils and lead them to defeat monstrosities, collect loot and overcome your heroes’ fears. Mental turmoil is the main theme of Darkest Dungeon and I was surprised how greatly it was implemented into the gameplay.

Who you gonna call?

Even though you create a team of four, classes are numerous and it is up to you who you will choose (from the pool that was randomly generated just a moment ago, so that’s where your dreams may start falling apart). As you may guess, each profession has its own strengths and weaknesses. The game is based on walking from left to right and character positioning is crucial. It might happen that a wrongly placed warrior will not have a chance to attack.

Or it can happen that he dies quicker than you spell “What a beautiful day it… my god”. 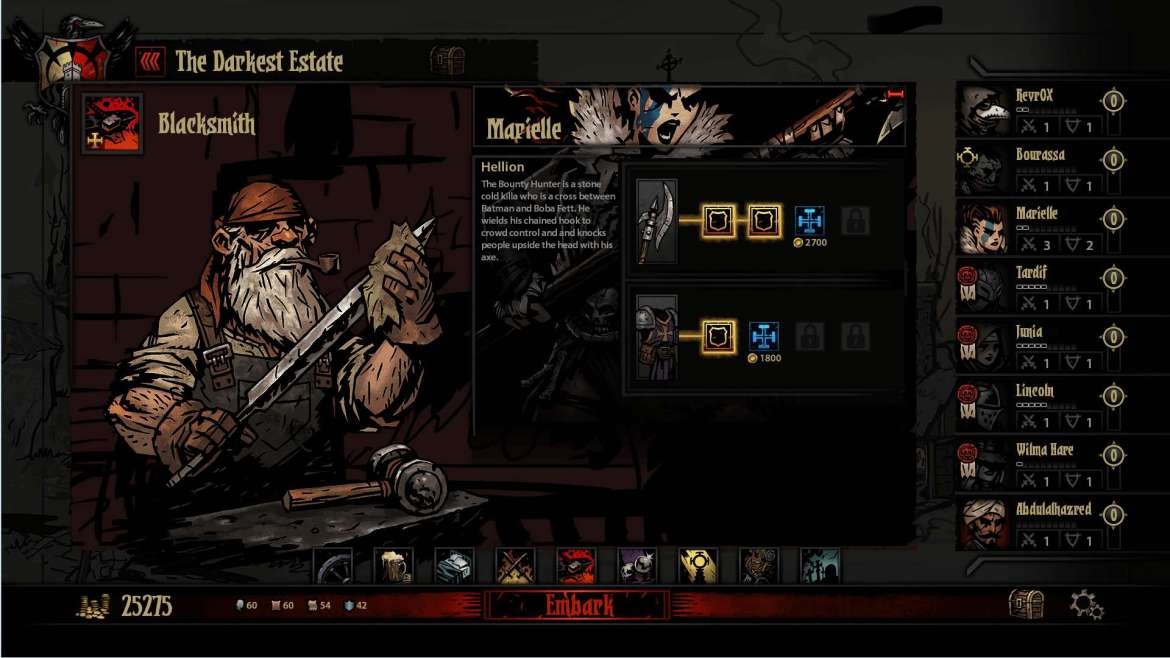 The game is unforgiving, but fortunately not XCOM-level unforgiving. It’s very unpredictable and tense, and it’s a result of very deep combat mechanics. I was surprised how many aspects are there for discovery. With each hour you learn new things: how a Crusader behaves, that AoE (Area of Effect) attacks shouldn’t be your primary choice, that corpses may stop your attack, and that you will be just fine when a healer dies before even trying to restore a single point of life.

There’s a stress level. Each action during missions affects the mental state of our heroes. If stressed heavily, they might suffer a heart attack. But when faced with demon hordes and living skeletons, people try to cope with various means. Some start drinking, others visit brothels… or start praying. As a result of expeditions heroes get Quirks – some of which might appear positive, but all in all they have a negative effect. 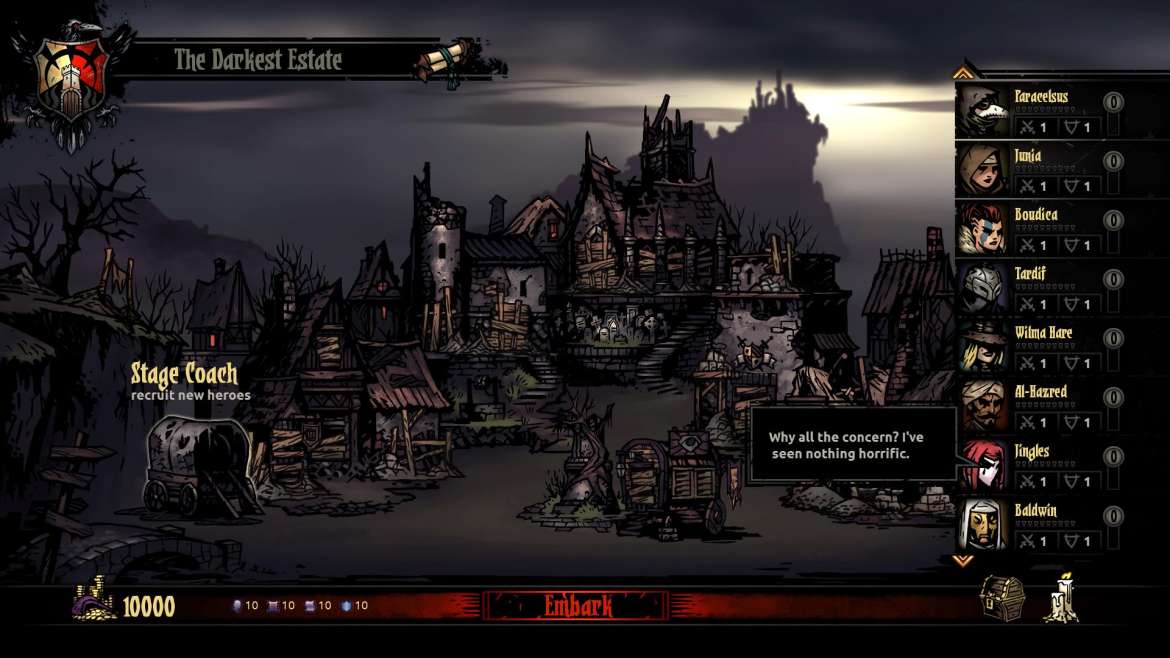 It’s a great idea, because it not only suits the game narrative-wise, but also makes the gameplay much more interesting than in standard roguelikes. It’s impossible to guess if our hero will start believing she is possessed by demons or that she is the only person who is allowed to collect loot (traps hidden in such places aren’t that rare…). One time my healing specialist was stressed so much she became selfish. Starting from there I was unable to heal anyone else.

Fortunately, you are able to reduce the stress level in the town by sending heroes to the tavern and other facilities. Some Quirks might force you to send a character to a specific place and it often happens that there’s only one slot and it’s occupied (by the local gravedigger, for example). Some diseases can be cured in the Sanitarium, but it’s up to you. Funds are limited and you should decide if healing is as urgent as buying a new armor for your fighter.

I was positively surprised by the level of complexity that Darkest Dungeon delivers. During missions there’s a certain light level – the darker it becomes, the easier it is for enemies to surprise us or fall into a trap. Longer trips require proper supplies. It’s always important to reduce the stress level every possible way. 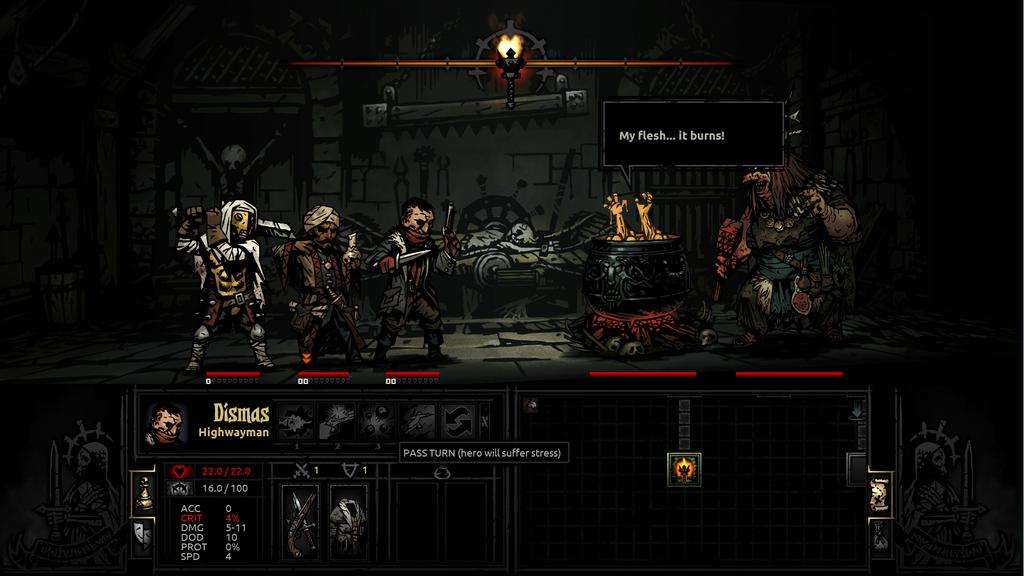 Darkest Dungeon is a combination of many surprising elements, but I would like to dedicate a separate paragraph to one man – Wayne June. He’s the voice actor behind the narrator of the game and what a tremendous work he’s done! In general, he’s the only voice heard during gameplay and no other is required. He perfectly builds the atmosphere, telling us about the backstory and the events currently happening onscreen (effects of attack etc.). Just fabulous!

The same stands for the artstyle – it’s grim and unique and you should just take a look at any gameplay video, because you’ll surely appreciate the in-fight animations. Its specific comic book style and a parallax create some very memorable moments. Not that you want to remember the worst terrors from your dreams…

I was surprised how addictive Darkest Dungeon was. Not for 10-hour-long playthroughs. It’s a great game if you want to relax for 30-60 minutes and it just happens you have a pad or a PlayStation Vita nearby. Of course, there’s some grind later in the gameplay and after some time it becomes repetitive. And there are some UI problems on consoles. But thanks to roguelike elements and a certain unpredictability it remains an entertaining game. And I would wish only such games would come from Kickstarter.

Gather the party of adventurers and set on a journey in a dark, terrifying an merciless world of Darkest Dungeon. This hardcore RPG will test your absolute limits of your ability with truly unrepentant combat where your heroes will lose everything down to their sanity.