It’s obvious to say that the original 1993 Doom changed the industry. But it needs to be said as we venture into the field of resurrected IPs.

If Duke Nukem Forever does ring any bell, you surely know how hard it is to bring back an existing IP and create something worth playing. But there are some success stories, like Fallout 3 – even though criticised by many – or Wolfenstein: The New Order. This year marks the return of Doom and it is hell of a comeback.

Doom Marine is back

I was pleasantly surprised how this 20-year-old formula was brought back and refreshed without killing anything that made the original Doom essential. The 2016 Doom is a game that focuses on gameplay without going into the territory of action movie-like sequences. You are constantly moving here but it’s not because of scripted events. Instead, you jump, dash and shoot because your muscle memory tells you to. It’s almost like a strategy coming on the fly without a second thought. Your reflexes are a priority and the game happens to be insanely fast. 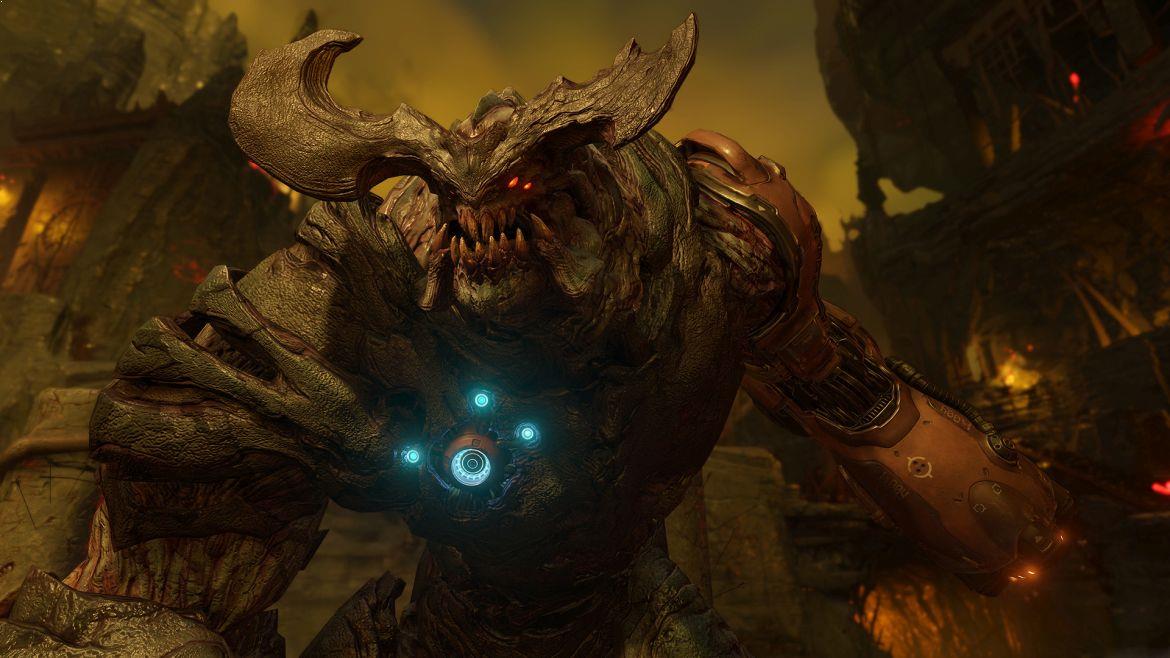 Before I go into the details, I must say one thing: oh boy, those glorious Frames Per Second! I’ve played Doom both on PC and PlayStation 4, and it’s a great experience on both platforms. PS4 players won’t experience full 60 FPS, of course, but even there the gameplay is fluid and smooth.

Back to business: the story is here but it’s not expected to be exposed or very heavy in twists and cliffhangers. There are some interesting plots and backstories, but I believe they are here just because some game critic would moan about their lack. What’s surprising is the length of the campaign – it will take you around ten hours to finish it on “normal” difficulty with additional time needed if you want to take on grander risks.

You’ll notice quickly that maps are created from a series of more or less visible killrooms and that’s a good thing here. You’ll frequently hear an AI voice informing you about demonic infestation and this is when the bloodshed begins. If you wished for a cover system or health auto-renewing after a few seconds, that’s the wrong address. 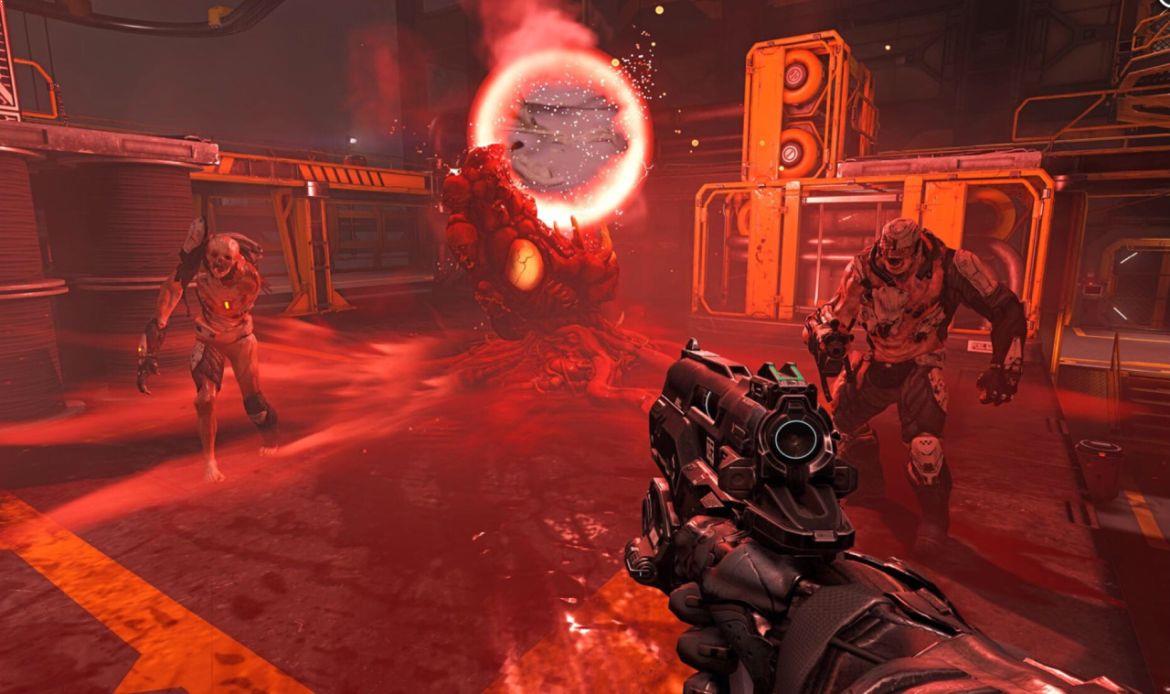 There’s an image floating the ocean of Internet where maps from old FPS games and modern shooters are compared. Doom’s maps are nothing like those in Call of Duty or Battlefield. A lot of exploration is expected – not only to unlock doors via colorful keycards, but also to find hidden items and collectibles. I’m not a fan of platforming elements in FPS titles but here they are uniquely consistent with the gameplay as a whole.

There’s a lot of fun simply by exploring the capabilities of newly received guns. Your fights are full of quick draws and actions known as glory kills – it’s a sequence allowing you to finish off an enemy and receive power-ups with health and bullets. My only objection is that those quick kills become a bit repetitive in the second half of the campaign. You have to use them to survive but if you spam them at the beginning, you’ll quickly remember every animation and get a bit bored. It’s easy to use same strategy for each killroom and you must remember that the campaign is here for you to experiment, not to analyze the story.

But don’t be afraid, you won’t get bored that easy. Repetitiveness is a bit distracting, but there’s a lot to accomplish. As I mentioned, there are numerous collectibles to find. You’ll get various challenges for every mission and some of them require proper timing and great skill – like the one with killing two lesser enemies with one shotgun shot. Weapon and armor upgrades to find are required. Oh, and there are bosses – not as many as I would like to see, but each fight is a full rollercoaster with a chance to use your whole arsenal. 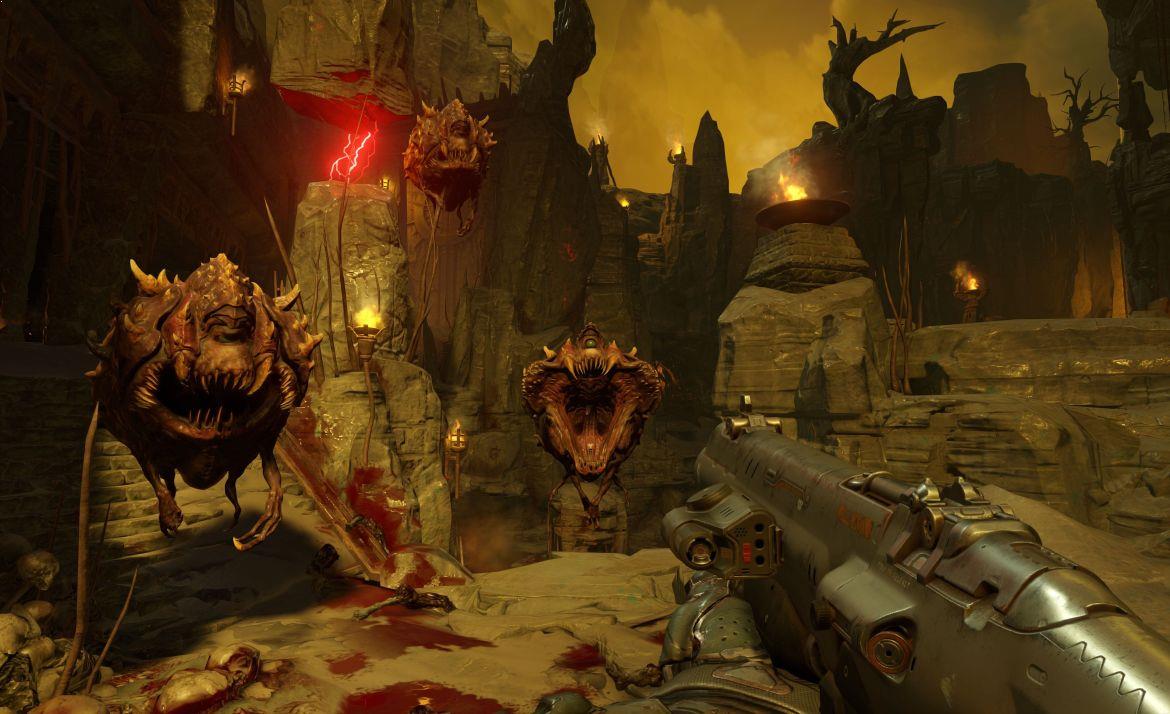 When you are done with this demonic carnage, there’s also a multiplayer part. One note here: jumping between single player and online modes takes a bit on PS4. It’s a strange thing when the game loads the main menu and when you want to visit multiplayer, you have to load it again. It hasn’t been patched event after the release of three DLCs from Season Pass, so I believe it might have been developers’ idea. Maybe a way to load the necessary assets?

Multiplayer is a different experience than the campaign. Not better or worse, more of a parallel component. It’s as intense as Quake III Arena and where the story is a full tribute to oldschool shooters, online modes utilize much of the achievements of modern games. There are loadouts with two main weapons and perks are available as hack modules. There’s even a progress system with hundreds of items for your character customization.

At first I was afraid it’s not my gameplay type. I’ve played a lot PvP in Destiny and other console titles. Doom’s multiplayer is more rough, more direct, with rocket launchers and miniguns in the default loadouts. I’ve quickly learned that was a great idea – online modes are compelling as ever. You’ll get a lot of fun playing Freeze Tag, a mode inspired by Quake 2’s mod, where players don’t get killed but frozen instead. The other teammates are able to “unlock” you, but the same works for the opposite team and their buddies.

There are nine maps in the vanilla game, all with interesting design. Helix is the one I liked the most – there are some close quarters and a bit of verticality. It’s great for team deathmatch, especially if you have more coordinated team. 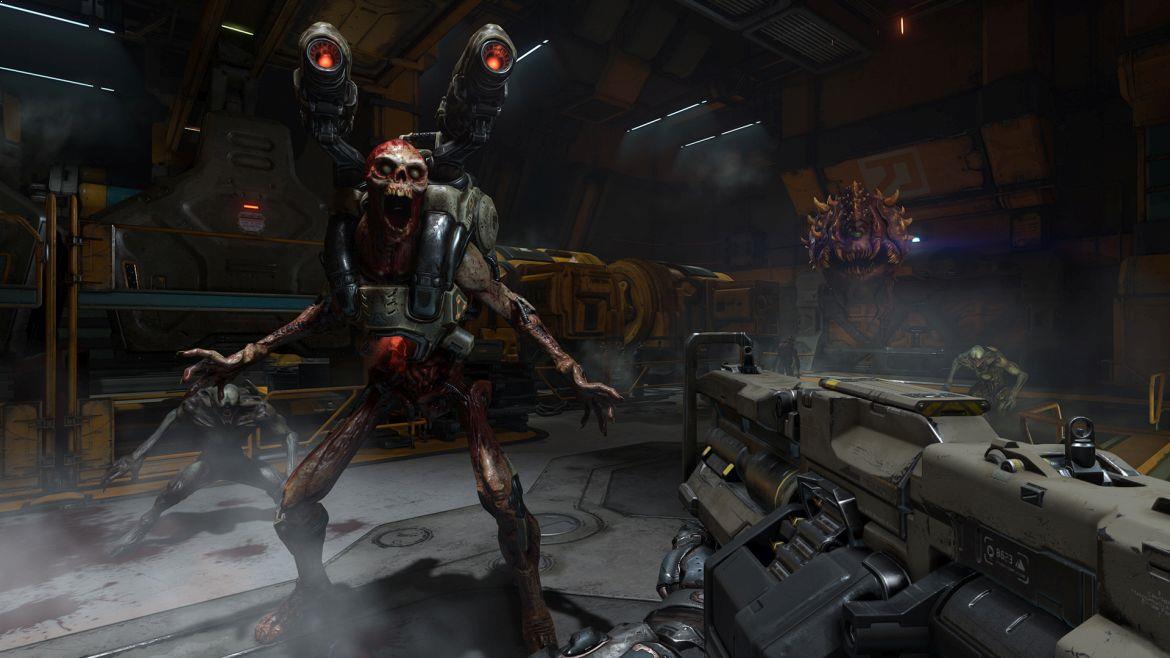 There are some flaws in the multiplayer as well. I think that melee animations are a bit problematic when locked on an enemy. I believe the fixed positions of specific items are bad for the newcomers – experienced players are masterminds of carnage now leaving little chance to grab that much needed armor for a newbie (I know, old games manner…). Moreover, I’ve noticed a lot of chaos between players who do everything to run from the one who got first to the demon rune. A nerf here might be needed in the future…

If that’s not enough, Doom contains a third mode – SnapMap. It’s a great feature for the community with tons of impressive content already available. SnapMap allows you to create your own maps and challenges based on the game’s assets. Personally I’m no curator but there are awesome picks waiting for you to try. And, if you have a bit of a designer in you, just try building something on your own.

Every review should contain something about graphics and audio, but do yourself a favor and check some high quality videos available. Doom looks and sounds great, and this is what makes the gameplay even more enjoyable.

id Software’s newest game isn’t just a cash grab after years of inactivity. It’s a resurrection of a cult IP, where a lot of fun awaits. William “B.J.” Blazkowicz was brought back not that long ago and now it’s turn for the Doom Marine. If we are doomed, I like it this way.

The most hardcore first-person shooter in history is back. DOOM is a dance of death on a world full of demons.

The Kid just rages for a while. | Narrator, Bastion