Far Cry 5, the latest installment in the Far Cry series has been out for a while and I thought it would make sense for me to throw my three cents into the mix. The game itself is something of a perfect realization of the Ubisoft’s Open World adventure RPGs with stealth elements they’ve been working on for over a decade now and it’s clear that the scope of the game is absolutely massive.

They wanted to do a lot here: beautiful graphics, varied and fun mechanics, an engaging story and perfect freedom in engaging with the game’s world. Did Ubisoft succeed? Well… Kind of. Let me go into details. 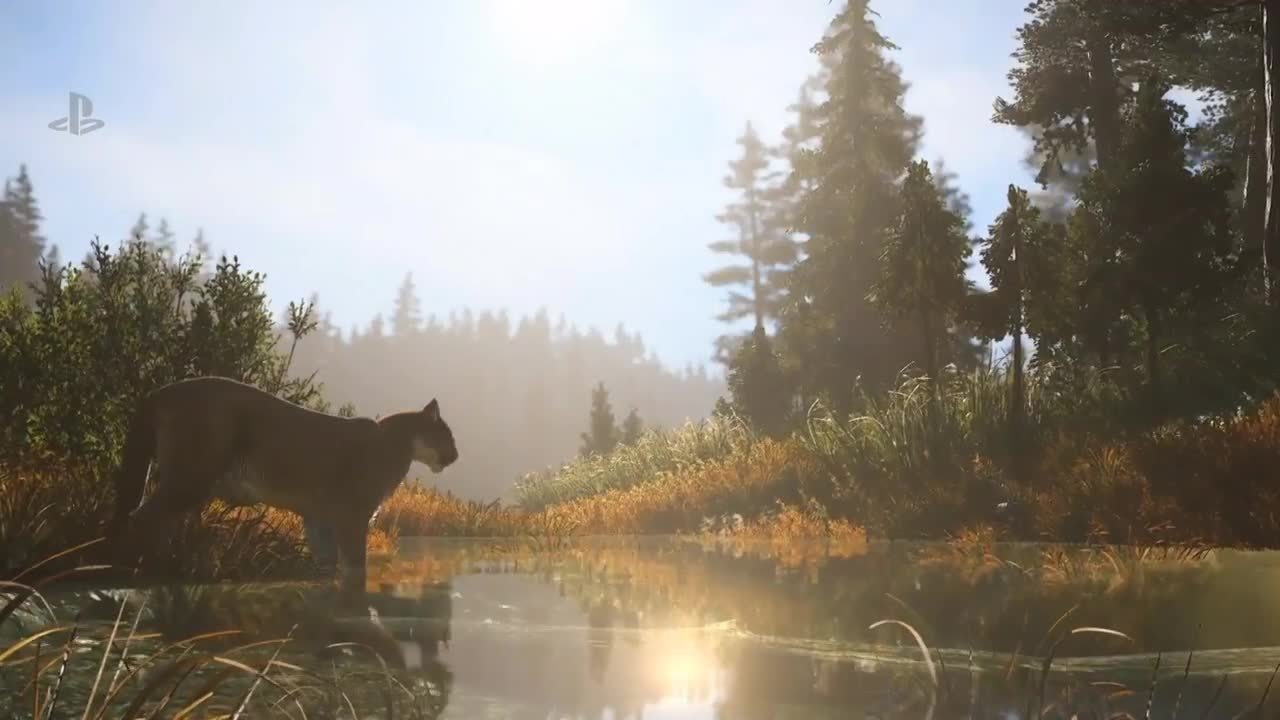 We’re in for a ride.

Let’s start with any easy one- the graphics. It is certainly true that the Montana region is absolutely, breathtakingly beautiful. Everything from the rivers, through luscious forests to the mountain-tops looks absolutely amazing. That first moment after the tutorial, after the fog drops and you can see the entire valley? Wowzers. And every part of this world is alive, the fish swim in the lakes, the deer stride in the woods, more dangerous encounters like roaming buffalos or occasional grizzly bears reinforce this notion that this place is teeming with life. The wildlife will interact with humans in the area, sometimes outright attacking them, which means you can use them to your advantage.

With weather conditions being dynamic, just traveling through the region is an absolute blast and there’s always something to find, a stash hidden away, a curious secretive quest or just a random event, sometimes hilarious events generated by the wildlife AI. You always feel like you’re actually traveling through a land that is living its own life and it would continue to with you gone. Now regrettably all of this is mired somewhat by not uncommon bugs- animals assuming T-poses and glitching, AI acting crazy and weird, people flying around etc. Although it is absolutely hilarious to see a bunch of cougars glitching out and doing a strange Bollywood-esque dance routine, it’s hard to believe that that was the intended purpose.

The game IS absolutely gorgeous and alive, but this world just can’t handle the immense complexity and variability the game is trying to create. It’s not a major issue, game-breaking bugs don’t occur on reliable basis and it can mostly be excused, but it still had to be mentioned.

The various mechanics of the game, from gun-play to driving are all masterfully crafted. Guns, although they somewhat lack variety, work with sufficient and satisfying “punch”, it is immensely enjoyable to stroll into a peggy territory and have a grand ol’ shootout, the action is fast-paced, the AI is smart (for the most part) and the camps are designed in a cohesive, tight way, making such shootouts feel suitably tense and claustrophobic. Although admittedly it does get pretty boring after a while.

After doing this three or four times, every encounter seems like a déjà vu, so much so that you’ll probably find yourself driving past enemy convoys and ignoring them, because there is really very little reason to bother with them. The monotony of the music doesn’t help either. I got genuinely quite tired of the same score being blasted into my ears whenever I am spotted by the enemies.

Of course you can attempt to diversify your approach,  you can use explosives or you could try sneaking around with a bow and killing enemies one by one, which does get boring a lot slower, because approaching each situation is going to be slightly different, but even then, the game sometimes feels like it’s just too damn big for the amount of ways you can actually approach it. And it constantly keeps throwing you into combat scenario after combat scenario and at some point, you’ll just end up ignoring it.

The world is huge and that’s the problem, it contributes to a huge amount of fatigue. You could go anywhere, do anything… But with vague directions you end up having no idea where to go or what to do. Problem is, it’s kind of not okay to actually criticize the game for it, as this is exactly what it was trying to do and it achieved it well. And if that’s what you like, more the power to you, if you do enjoy this kind of somewhat aimless wandering through the world and soaking it in, you’re going to have an amazing time. Me personally? I wouldn’t mind being rail-roaded a bit more. 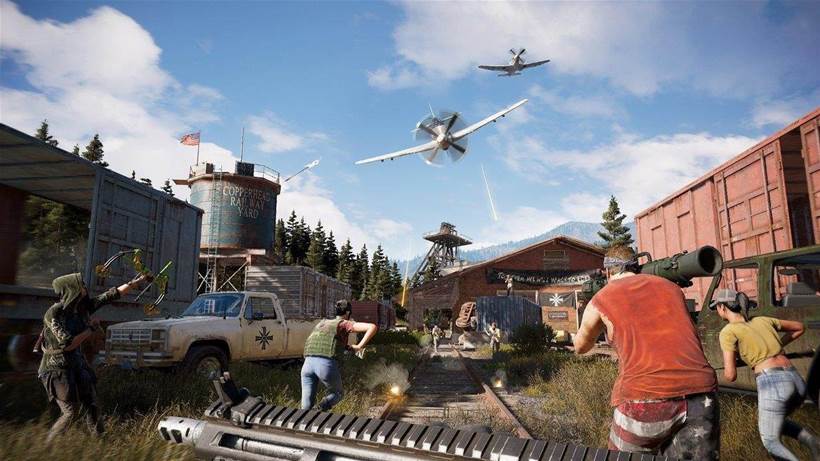 First time this happens it’s exciting. Seventeenth in a row, it looses its charm, let me tell ya.

My mind is telling me no, but my body is saying yes.

This is exacerbated by the false sense of urgency the game loves to foster in the player. After you finish tutorial, Dutch, the character whose voice you’ll be hearing through radio during most of the game, tells you about one of your friends being held hostage. He urges you to go there NOW, but on your way there a cavalcade of interruptions is bound to happen as new quests appear in your log and new areas to explore are discovered. You have this sense that you need to hurry, but you don’t want to have to hurry, because there’s stuff to do.

And the big issue is… You’re not in a hurry. Nothing adverse is going to happen if you take your time, you can take forever if you want to, you can drive across the whole god-damned countryside and do hundreds of quests before coming back to the main story and NOTHING will change. In fact, if you do try to ignore everything and just hurry up to save your friends, you’ll be blocked by Dutch telling you that you just can’t assault the boss directly yet, you need to finish up an arbitrary amount of quests in the area to progress the bar far enough to get the option to move on with the main story. The game is trying to create a sense of urgency to put tension and give you absolute freedom in doing whatever you want at the same time. These things don’t mix. 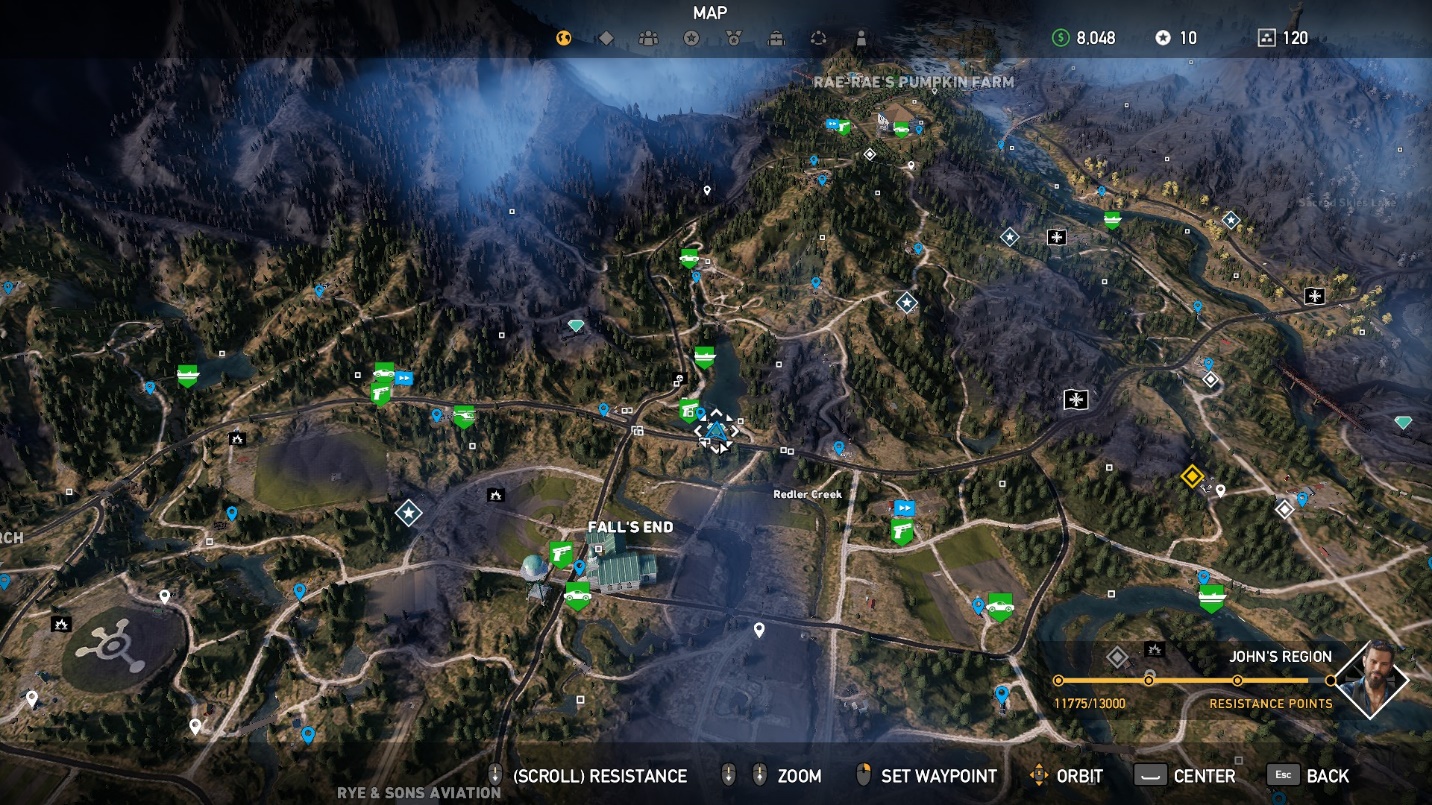 There’s just SO. MUCH. STUFF.

This is incredibly jarring and frustrating, being constantly hurried by the game, but knowing that there is no actual, real hurry whatsoever, creates a terrible cognitive dissonance that can break you right out of immersion. The strange and inappropriate reactions by the NPCs who you interact with don’t help either. You can help a captive hostage who will whisper to you to help them out, they are obviously in pain and scared, but once you pick them up, suddenly they act like nothing happened, they are cheerful and won’t even harken back to the event in question specifically. Oh they will tell you something like “thanks for helping me out, I’m with you”, but their reactions are unnatural and disjointed. Again, because the game is so expansive, offers so much freedom, it can’t model NPC behavior realistically.

Cut-scenes thrown into the mix are of course well directed and escape this problem, but they seem entirely disconnected from the rest of the game. The gameplay-story segregation is very heavy in Far Cry 5, it’s really hard to get into this story when it doesn’t actually seem to have much to do with the gameplay. And on that note.

Oh my Lord the story.

The story of Far Cry 5 is… Lackluster to say the least. It follows a straight-forward progression of “meet the new baddy in the area, resolve quests in the area, fight the baddy, get to a new area”. There is very little in the way of twists or turns, save for the very start and the very end of the game, which, without spoiling anything, is annoyingly unsatisfying, no matter what you do. It just seems to invalidate everything you’ve been working towards the entire game

The characters are entertaining and they are voiced very well by talented professionals, but one key issue pertaining to all villains emerges very quickly, and that’s a question of their motivation. See, in Far Cry 5 you’re supposed to oppose an insane cult led by Joseph Seed and his “family”. This is all treated very seriously, the cultists seem genuinely insane and threatening but the issue is… What exactly is their goal here? What do they want? What are they actually doing in Montana? For that matter, what are their beliefs actually? They seem to prophesize some kind of a giant catastrophe they call “Collapse”, but what is that exactly? And how do they know it’s gonna happen? We’re never told. 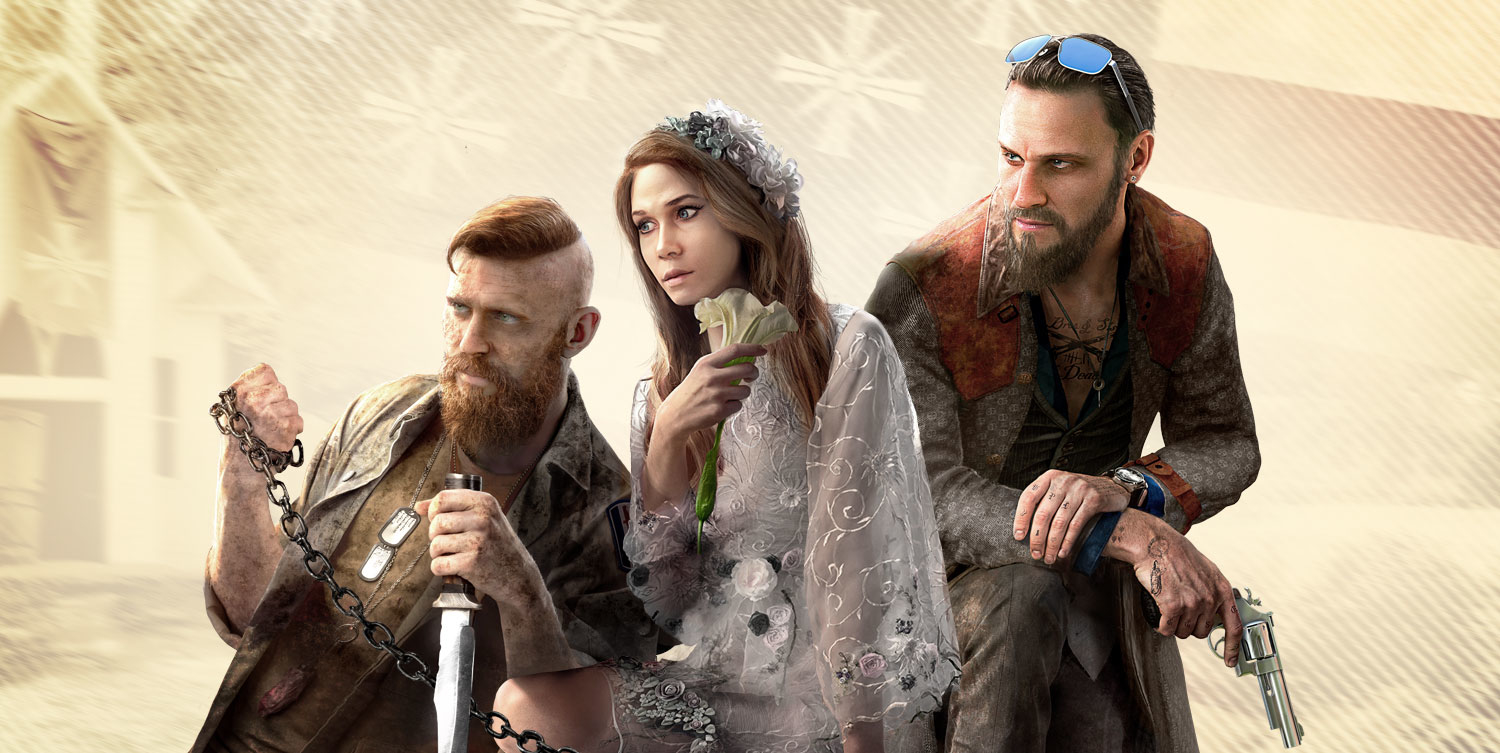 I have NO idea what any of these a-holes stands for.

And that is a huge issue. Throughout the game, after each boss fight, we are given an option to join the cult. But like… Why tho? They never give you a good reason beyond a vague threat of “this is gonna end terribly if you don’t”. And it actually DOES! Am I supposed to had seen it coming? Game, you’re sending me mixed signals here. At the end, the game lambastes you, the player, for doing so much damage, for killing so many “innocent” people, but the game itself never treats these villains as people. With no motivation and defined beliefs, they are little more than orks in redneck skins with rifles. Even the primary antagonist is little more than a raving lunatic. You are literally not given a chance to sympathize with them. In the darkest ending of the game, he gets his comeuppance, but this comes completely out of nowhere to the player. The game tries to do the Spec Ops: The Line thing where it attempts to shame the player, but it just comes off as pretentious. It tries to be Heart of Darkness but there is no real “descent” because there is no real tension. 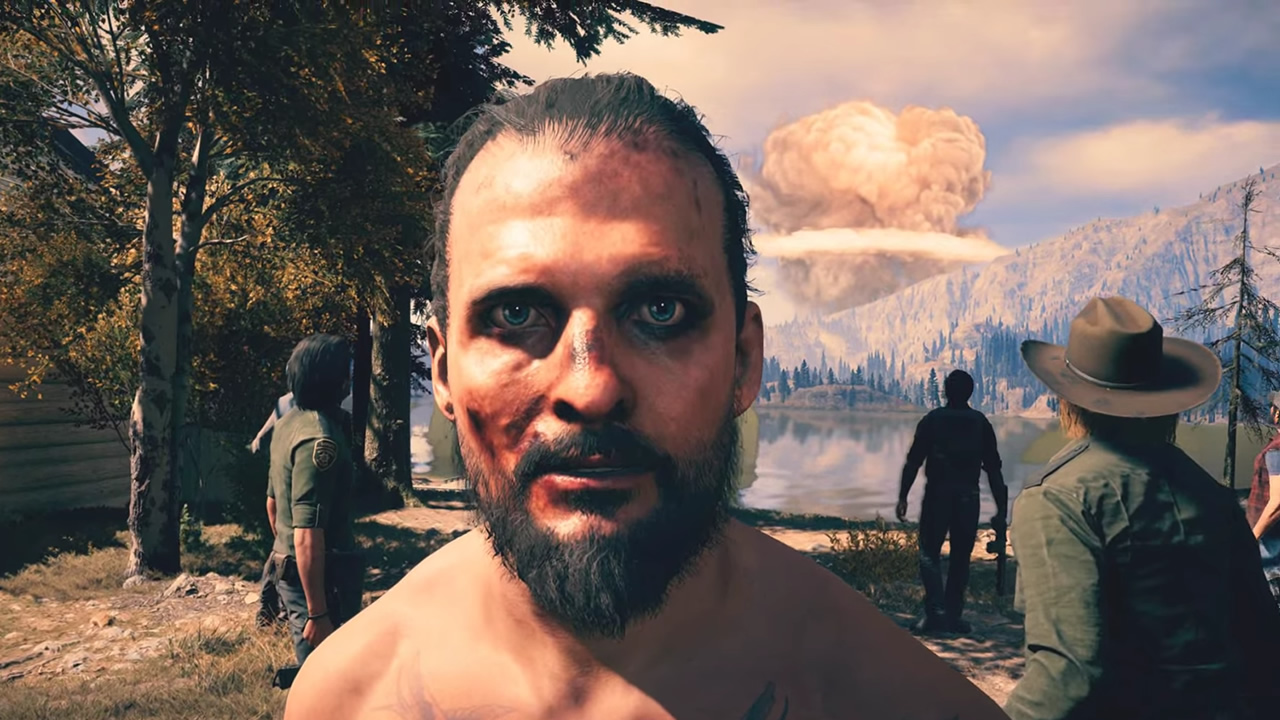 This is the end. Beautiful friend, the end.

I know I have been very harsh on Far Cry 5 and it may seem that I think it’s a bad game. I don’t. Far Cry 5 is absolutely amazing at what it’s trying to do- build an overwhelmingly huge world and immerse the player in it. Give them enough stuff to do that they can just sink in hours of just having fun with it. The issue is it’s also trying to have a discrete story, with time constrains and with some kind of a grand, 4th wall-breaking message. And at that it fails. Hard. Ultimately it is a good game, it attempts to do what it wants to do as well as it can, but in the end, what it wants to do is just contradictory. It’s trying to be two things at once, it succeeds at both of those, but the two of them just can’t work together. Far Cry 5 is like a great meal consisting of a delicious soup and tasty steak. Separately both things are amazing, but if you throw the steak into the soup bowl, you’re gonna ruin both and that’s what happened here.