Survival games are something of my Achilles Heel. I want to like them, I really do, but I’m just not the kind of player who enjoys them. Neither do I really enjoy city-building simulators, I always find them a little boring honestly- the difficulty doesn’t seem to ramp up and while I’m not against chill games in principle, I kind of want to have a sense of build-up.

So how can someone like me be captivated by a game like Frostpunk that on paper simply combines these elements? Well there is an old adage that states that some things are more than a sum of their parts. So, let’s talk Frostpunk. 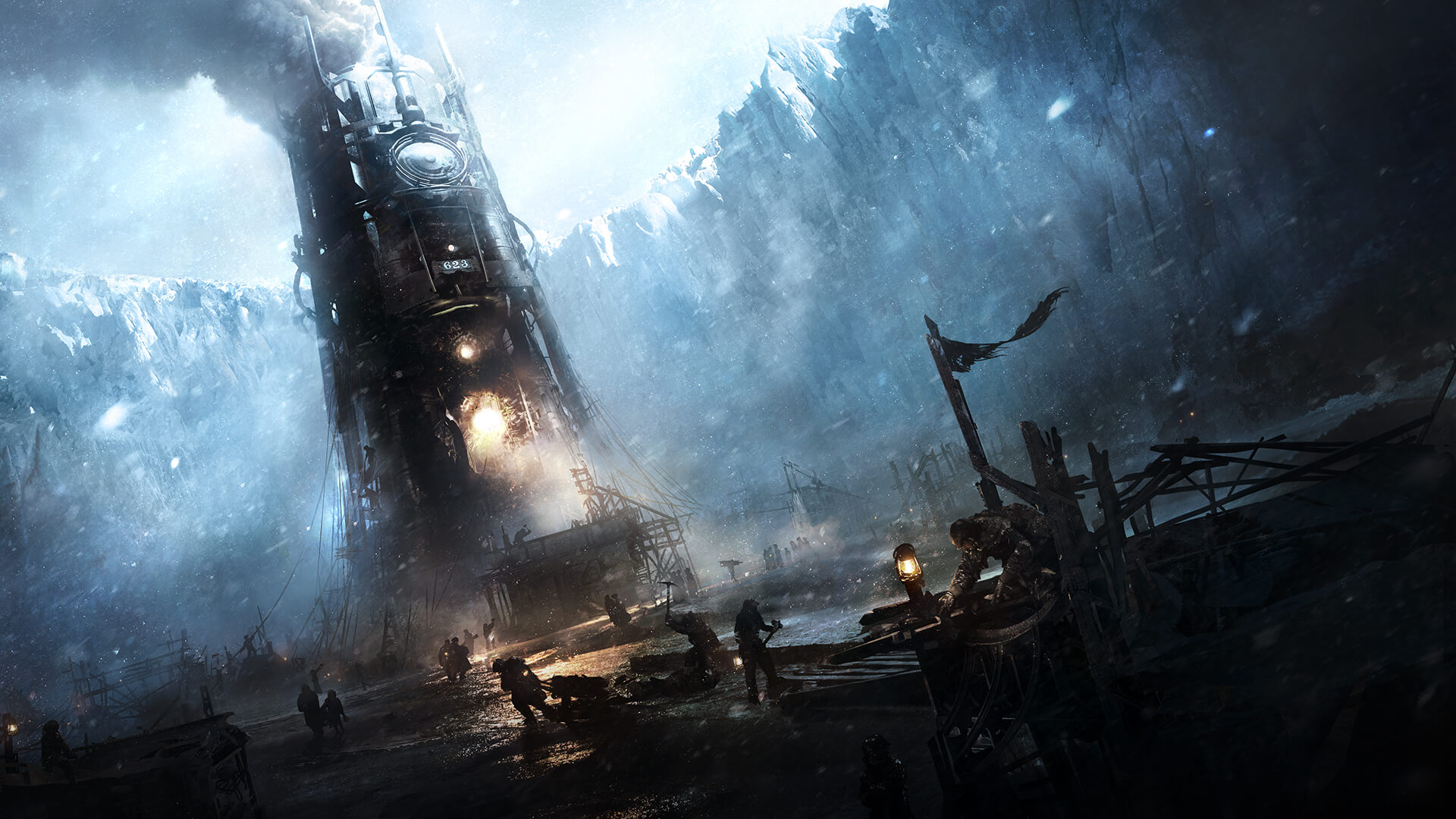 A word on aesthetics.

Frostpunk is a weird title isn’t it? It’s essentially a pun of Steampunk- a term used to describe a mixture of genre and aesthetics. Steampunk aesthetics means there’s a large emphasis on huge, steel machines working on steam engines, intricate gear mechanisms and the sense of industrialization.

And that is the aesthetics of Frostpunk with the twist being that it’s contrasted with the overwhelming abundance of snow and ice. The industrial, coal-munching city you build in the middle of a crater is starkly contrasted with the cold, harsh and dark wastes. As you zoom out you can see your small people wade through the snow to create routes. It forms an amazing time-lapse of your progress through the game.

The game’s engine is great at maximizing the effects of that style- snow will very realistically melt as the generator heats the surroundings. Paths in the snow created by your subjects will fill up again if left unused. The contrast of your burning steel and brass city looks quite beautifully against the backdrop of the ominous crater. Everything in Frostpunk works together to deliver a pleasing, stylish, visual experience. 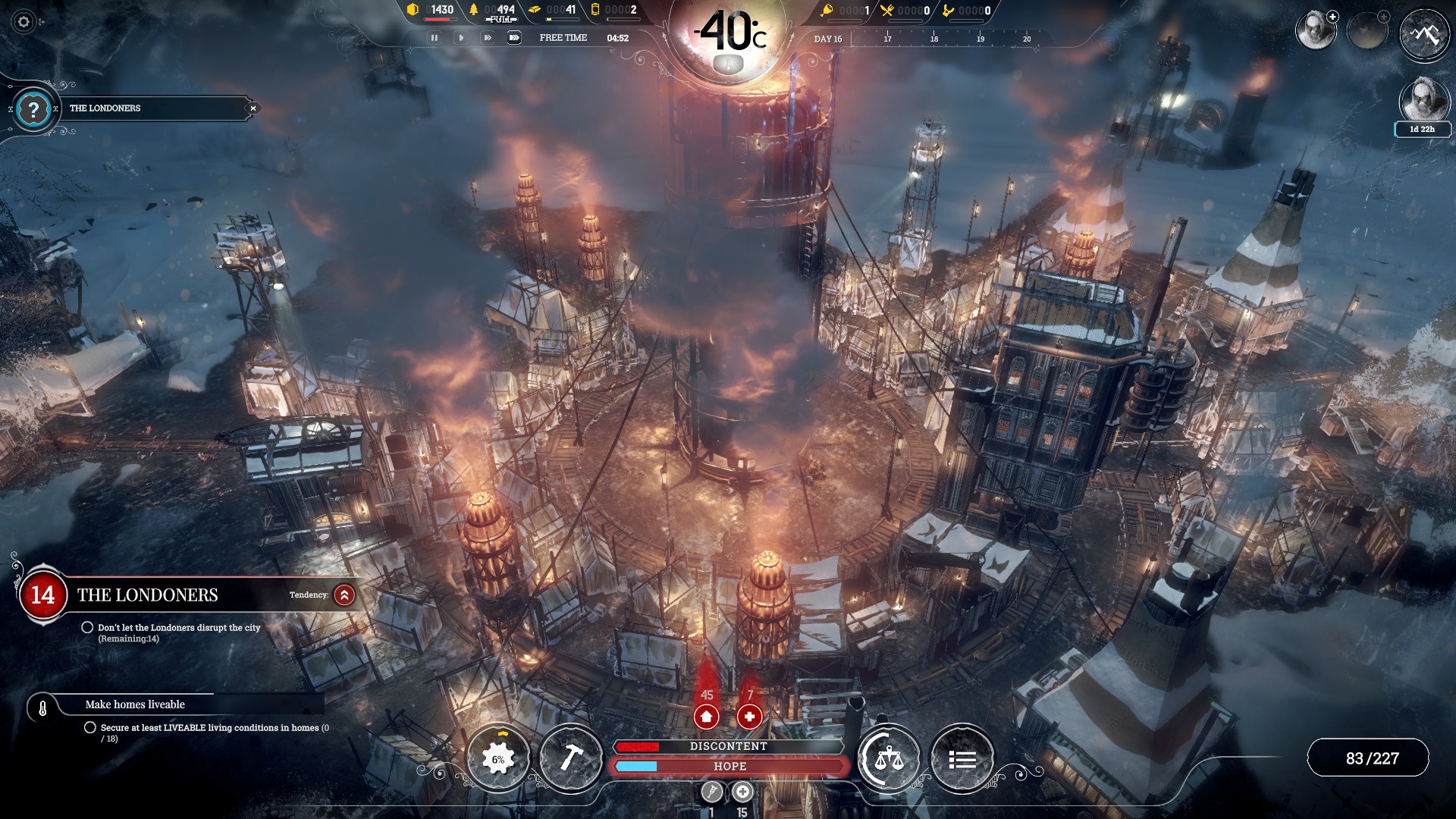 A lot of attention has been given to details to make the style really shine.

Fundamentally, survival games are all about managing resources, that much everybody knows. For 1st person action survival games this usually takes the form of managing multiple different meters- hunger, thirst, stamina, rest etc. Now the big problem is- these meters never change during the game. An energy-bar is going to be as filling for you at the start of the game as it will be at the end of the game. Not only is striking the balance difficult as it is very easy to turn the game into a farce where the player character is exhausted after 30 seconds of a brisk walk, but after the player gains more efficient ways of generating resources, the challenge of the game completely evaporates.

Strategy games are different though. Not only is it easier to explain harsh resources consumption (I can buy that a huge heat generator burns through coal like crazy, but getting hungry 5 minutes after a meal strains my suspension of disbelief), but throughout the game new resources can become available to the player. Even as you become more efficient in generating basic resources, you might find that you need new ways of gaining completely different ones. 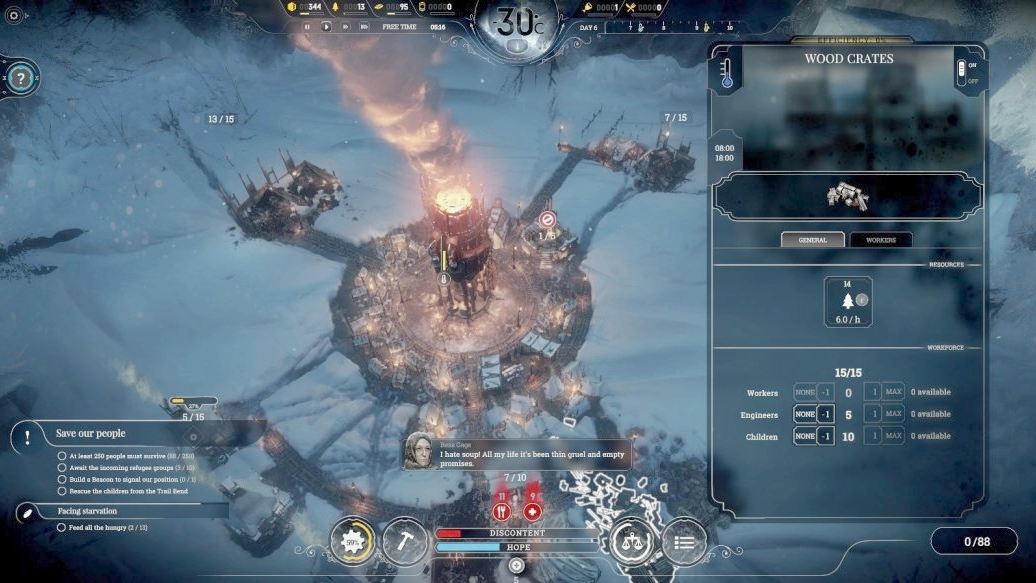 The titular jig in action

Enter Frostpunk. In the game, you initially have to worry about 4 basic resources: coal, wood, food and steel. And two other, but more about those later. As you gather these resources to satisfy the needs of the population in the harsh conditions of -40 degrees Celsius, new problems will emerge. Policies will enable you to transform food into different types of meals which will have different effects, twisting the basic mechanics into new forms. Moreover, as the temperature drops, frostbites will start to occur, forcing you to deal with the amputees in creative ways. As people start dying corpses can actually become a valuable resources. Like I said earlier- more than sum of its parts.

What this does is keep the “dwindling resources jig” going throughout the game, constantly ramping it up and letting you settle in by making resources acquisition efficient, only to ramp it up again when new problems and solutions emerge. Now this is obviously not a new concept, but the way it is used in Frostpunk is pure genius, the game feels like a series of ups and downs as you become more effective but then suddenly learn… There’s more. And there’s always, always more. 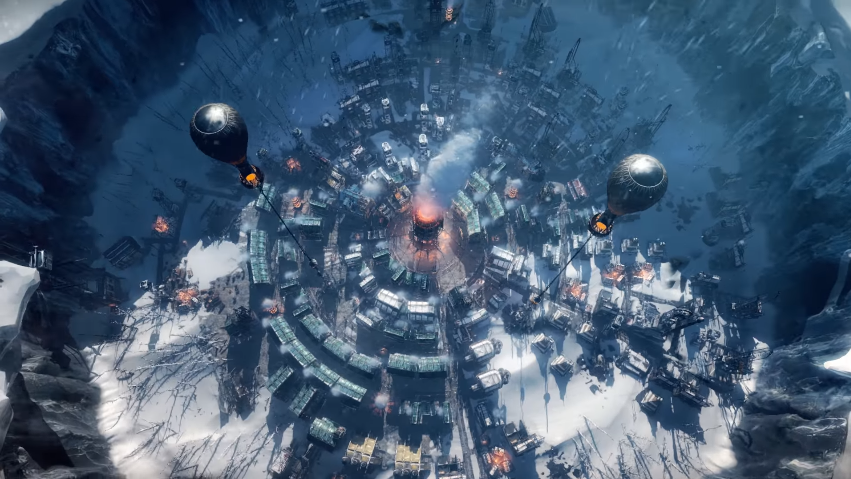 The hot-air balloons allow you to scout the glacier for survivor and resources, again changing the scope of the game.

City-building games aren’t my favorite genre specifically because they’re something of a “make-up your own challenge” type of games. In, say, Cities: Skylines, you can establish your own goals to how you want to build a city- do you want it to be big, small, business oriented, rural etc. But ultimately you’re not rushed anywhere, it’s akin to building a Lego house, you have limitless freedom of what you build.

Frostpunk doesn’t give you that freedom. The survival gameplay means you have to act NOW. Your city will be growing from the bottom-up. Any mistakes you make during that stage, not knowing what kind of options might become available to you in the future? You get to inherit those. You don’t get to disavow them. As it progresses, the game will open up more options to you, but building this last beacon of civilization is always a hectic affair– you need to be as efficient as possible, not because you want to, but because this can actually cost you a game session.

That’s how a City Builder game suddenly becomes challenging and never really stops being challenging afterwards. Even if you become very efficient at gathering resources, if you make a crucial mistake in planning out the city, this will cost you a lot down the line. This is a beautiful feedback loop where building offers the solution to the acquisition problem, but it also becomes an issue for that same process. And there is no room for mistakes here, although the game is very good at communicating what you did wrong, while you’re doing it you’ll have no idea you’re making huge mistakes. 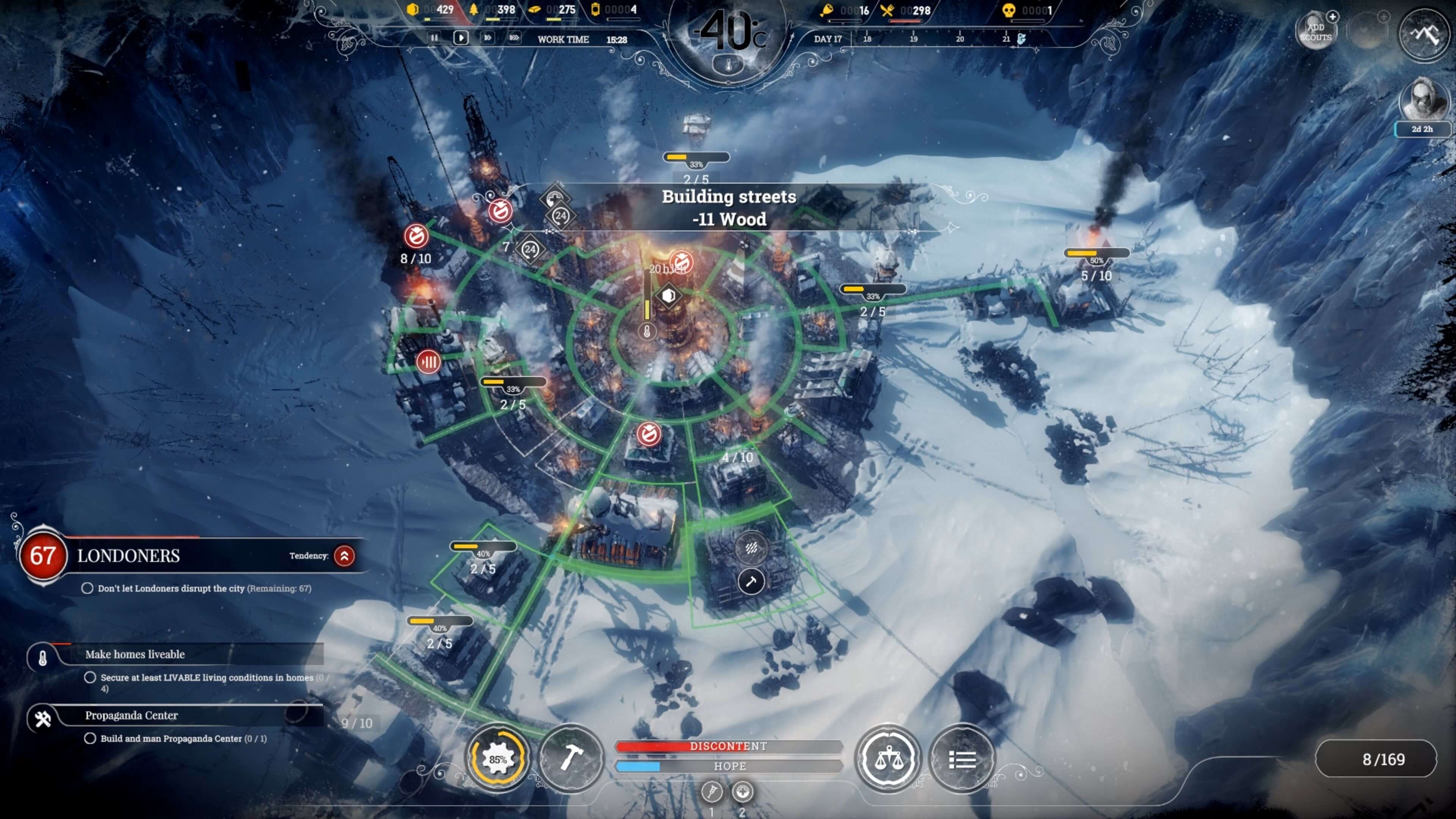 Make each decision count. You may not get another chance.

The beautiful, viscous substance holding it all together.

Hope and Discontent are the two resources I omitted earlier. And you know, I can’t help but marvel at a game tying its narrative to its very mechanics. Fundamentally Frostpunk tells a story about survival at any cost. Balancing these two resources is tricky. Hope will constantly go down, while Discontent will only go up as the temperature drops. Oh, and people are a resource too.

The game features a policy tree, these are special perks that will help you develop the city, but at a price. See, the direst of circumstances, require the direst of choices. Using dead bodies as fertilizer, putting saw-dust to artificially make meals more filling, sending children into coal-mines. Survival of the city is at stake and you WILL use these options. And at some point you’ll find that you’re using them simply because they are efficient, not even considering the wider ramifications. 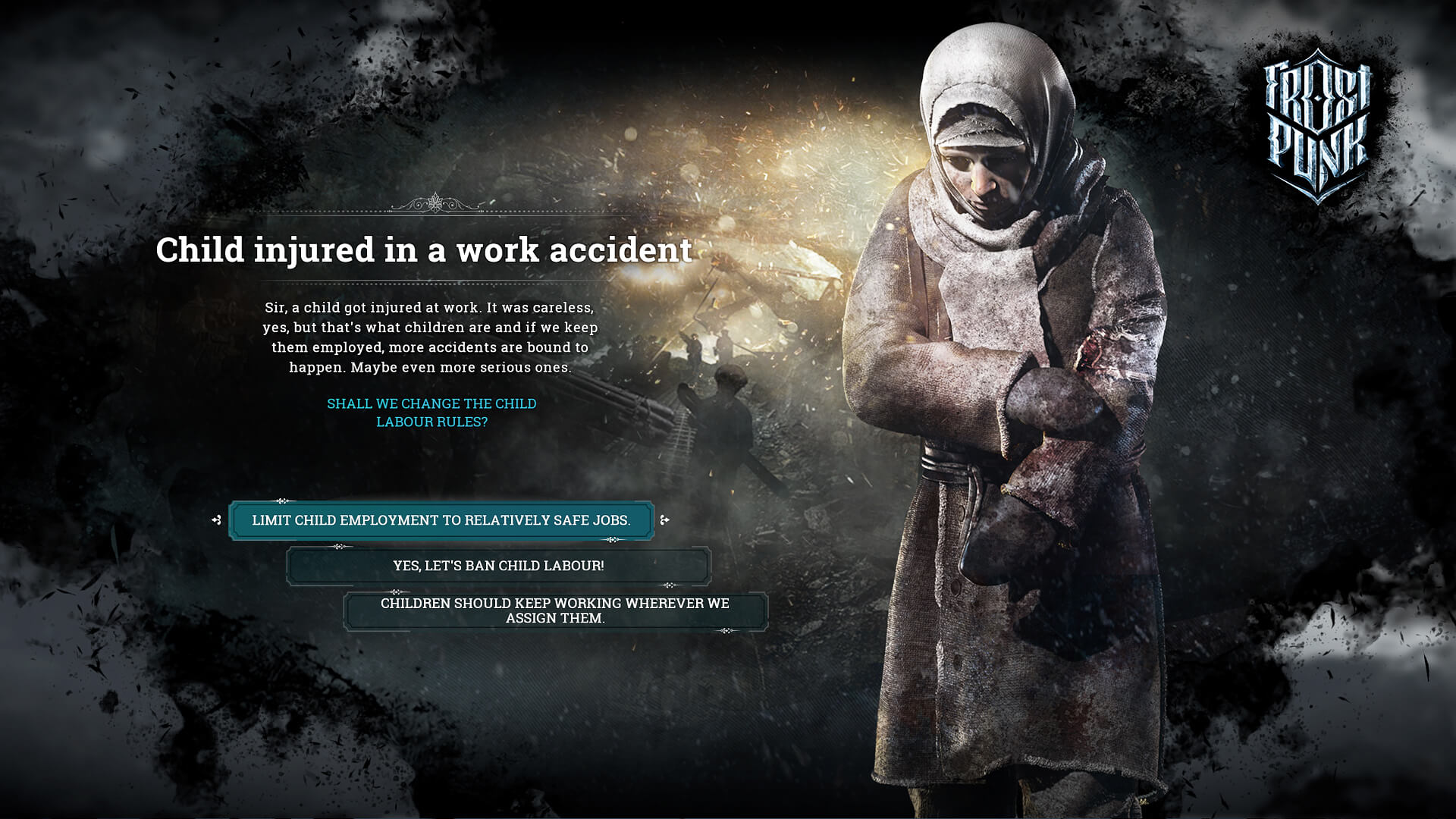 Was it worth it? The problem is- it probably was.

But the people of the city will remind you. During the game events can occur where people will react to your decisions. You can be damned sure they’ll have some choice words to give you about children dying in the coal-mines. And the worst part? All you’ll see at that point is the mechanical effect it has on your city- a drop in Hope, a raise in Discontent. This will transform harsh, moral decisions into a soulless algorithm.

It is fitting that Forstpunk uses the aesthetics that it does, because ultimately there’s a commentary about the issues of industrialization to be made here. The city is a shining beacon of hope, and people need hope, but is that hope even worth it? Hope built on the dead bodies of children, used as a fertilizer? In Frostpunk you can choose two different development paths- Faith or Order. And as your Hope meter turns into Obedience meter you’ll ask yourself: did I do the right thing? And the horror is- at that point it’s no longer about right or wrong, it’s about efficient or inefficient. 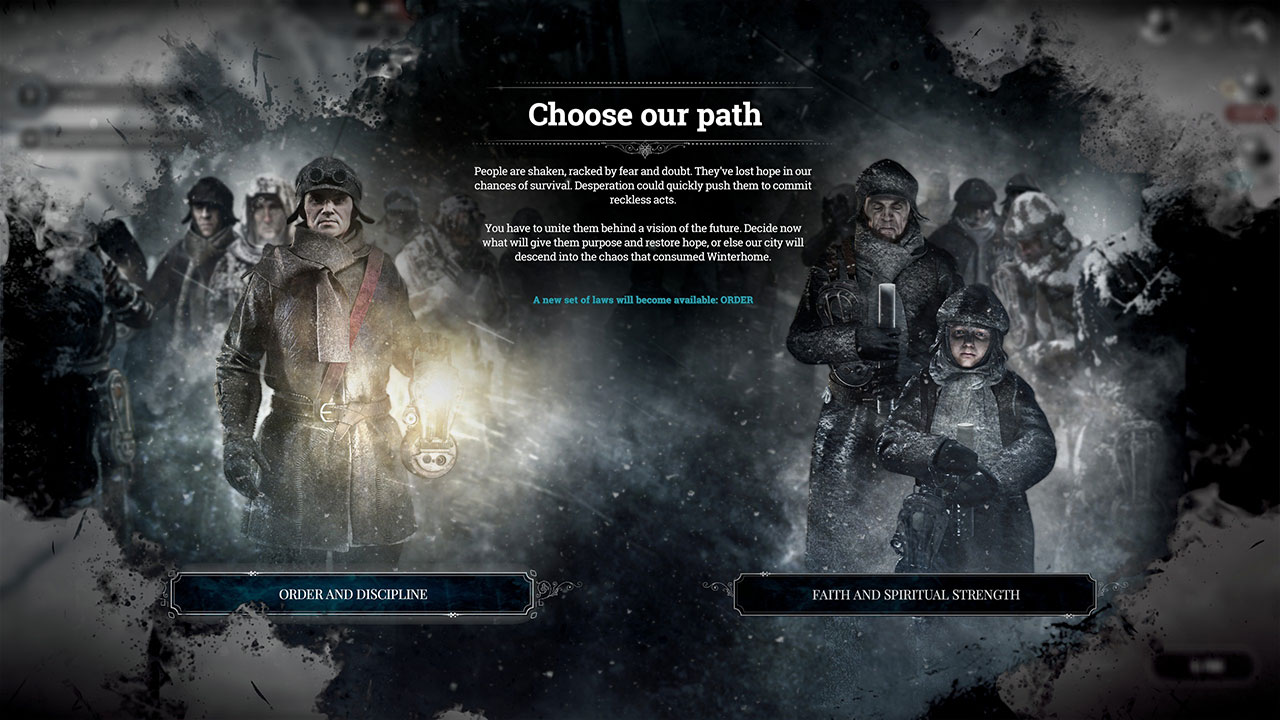 You’ll notice a lack of “science” option. In the end humans are ruled by hope and fear, not reason. Not when survival is at stake.

Frostpunk was developed by the people previously behind This War of Mine and their handiwork can be seen all over the place. From great choice of aesthetics and visual style to the amazing way in which game mechanics are directly tied to the story and how the ramifications of that reach beyond the game itself and form a larger commentary that sticks with you.

This is of course not a game for everyone. No game is. But it blends genres and mechanics in a way that makes it unique and as can be seen by the example of yours truly, even someone who doesn’t like survival or city builder games can find a survival city-builder fun. I cordially encourage you to try it out.