It’s hard to talk about the Xbox brand without mentioning the Gears of War series. It was hard, to be specific, as the IP was visibly missing from the Xbox One’s lineup.

Gears of War’s story came to an end with the ending of the third game. Judgement, serving as the trilogy’s prequel, was an entertaining piece of “same old shit” without the oomph to start its own series. It’s about time the next-now-current-gen game joins the catalogue.

Gears of War 4 serves as a fresh start for players new to the Xbox family. It introduces new characters and the time that has passed since the third installment is enough to make planet Sera an interesting setting once again. Everything is familiar and one wonders if it’s not too familiar.

When ending credits start to roll out you ask yourself: is that all? It surely is not. And that’s the main problem with GoW4. It’s a Gears title at its roots but every change in its structure when compared to the series’ standards is done with such caution that it almost never takes risks. It took me a bit before I had a clear idea where the problem exists.

Newcomers will surely fall in love with the gameplay and a unique, rough but comedic feel of the series. I’ve finished all previous games three or four times each. And, as it standsout , there’s nothing new for me to find.

Don’t get me wrong. The setting is great – there are many questions about what happened on Sera since the last fight with the Locust, and some of the side characters are instantly likeable. At the same time most of the plots are shallow, there’s not enough lore to deepen the story and as kill rooms are as common but the meaningful insight seems missing.

Marcus Fenix and other Gears are there to pass the torch/Lancer, but with more comic, younger team to play, it is hard for both players and developers themselves to leave the old fellas behind.

The new enemies don’t help the Coalition in reinvigorating the series. The Swarm’s origin is easy to guess even without playing Gears of War 4 and gameplay-wise their presence on the battlefield is very similar to Locust’s behaviour. There are also the DeeBees – much more entertaining to fight, a great addition to enemies’ roster.

After playing the campaign – and fighting the final, truly disappointing boss – we are left with one conviction: Gears 5 is coming and we are here without any major goal and only some small lore-wise cliffhangers. Fortunately, there are two online parts that make Gears of War 4 a much better, likeable game.

One dies for all

The multiplayer segment is as familiar as the story but in this case it’s not an accusation. Almost all popular modes are back and you’ll quickly notice that the newly introduced arsenal haven’t taken place of the adored Gnasher. The good thing is that new weapons at least make fights more diversified.

Ten maps were available on release with additional being added through DLC. Harbor quickly became one of my favourites because of both of some open spaces and interesting covers between the cargo. Maps are really well designed and are great for various modes. Reclaimed, set on an abandoned farmhouse, hosted a few of my most memorable fights.

There are three new modes with eight in total. Dodgeball is an interesting addition as the only way there for a player to respawn is to see someone from our team kill the opponent and survive for five seconds. Not as easy as it seems, believe me.

The greatest part of Gears of War 4 comes in the form of Horde 3.0 mode. I had most fun while playing its previous incarnation in GoW3 and now it comes more expanded than ever. The Fabricator is the reason why the gameplay is so refreshing and thrilling. Once again a group of five players has to beat 50 waves of enemies.

To increase their chances, they can buy fortifications. Power is needed to create those with the usage of the Fabricator, but you won’t receive energy simply by killing (that was the case in Horde 2.0). You have to collect a pickup before another wave starts. It’s a good idea to visit the Fabricator once in a while to deposit Power. If you die, the energy is lost.

Horde 3.0 utilizes a new class system. There are five classes in total, but for me there’s only one essential – the Engineer. As a fan of various support heroes in other games, I have fallen in love with the possibility of repairing fortifications and making them much more effective. There’s a cost too – a much lower firepower but it’s quickly balanced by other profits.

If you’re looking for one reason to play GoW4, it’s this mode. It’s entertaining, ever evolving and hard as hell. With a good team you’ll spend dozens of hours slicing and shooting through waves of DeeBees and the Swarm.

A reviewer’s duty demands that I mention a cards system that’s used to customize gameplay. I’m not interested in vanity items in multiplayer games and The Coalition didn’t change my feelings. GoW4’s progress is slow enough that some players will spend additional money just to get a shiny new skin for their weapon or character. There are also some challenge cards for both multiplayer and Horde modes but nothing that makes them essential.

Jim Sterling has described Gears of War 4 as “a maintenance of the series” and this is a fitting description. It’s a great game for someone who has never played a GoW series. It’s only alright for those who have the Lancer’s sound as a ringtone. The good news is that it works really well on Windows 10, so non-console players may taste Gears’ universe once again. Time will tell for how long the player base will stay in this mad world. 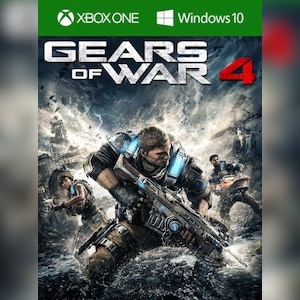