A fencing game with cruel mechanics, the first Nidhogg was a phenomenal indie game for those who want to embarrass their friends. Is Nidhogg 2 as good as its predecessor?

A Bit of History

Nidhogg was a case of a splendid indie game, whose launch history seems like a nightmare to gamers. Its first version, called the Raging Hadron, was showcased back in 2010 when times were simpler and indies were fewer. It took 4 years for the developer Messhof to finish the game and release it with little press coverage. The game, however, made rounds through all the important indie game showcase events, gathering a plethora of awards. Why? Well, the developer himself says that Nidhogg works best at live, public events.

In the case of the sequel, Messhof didn’t mess around. Nidhogg 2 was announced in 2016 and launched August 15, 2017. After all, now there was a community of ardent fans who were waiting for the game, so the developer didn’t have the comfortable conditions of working for years in the shadows. Luckily, as was the case with its predecessor, it’s splendid.

The idea for Nidhogg is simple. It’s a side scrolling, 2D fencing game. The goal is to get to the finish line. In order to do so, you need to kill your opponent. After the first kill, you can run in the proper direction and fight the respawning opponent. The trick is, this time around you don’t have to kill them, just avoid their blade. Which is not as easy as it sounds.

You see, Nidhogg’s gameplay is fair and cruel at the same time. When it comes to standard movement, your fencer can run, jump, dive-kick and roll. And of course, there’s the blade with three positions for blocking the other player’s sword. By combining these two elements and an instakill system, Nidhogg elevates twitchy, arcade gameplay into a new realm of mastery. There’s always a new trick to learn, a new way to cheat.

It takes only one hit to kill your enemy, so you have to play dirty and the game encourages you to do that. Nidhogg 2’s gameplay is all about making your opponent think that you are going to do something, and then do something else. Rarely can you see two players just standing there, fencing and exchanging blows. Fencers throw their swords at each other, dive-kick their opponents into pits, throw them to the ground and pound their heads with their feet. If you can find a way to cheat your opponent, you need to do that. If they can’t counter your jumping, you need to jump. If they aren’t fast enough to avoid your roll, you need to roll. And if they don’t know how to not be hit by a flying dagger, by all means, throw it all the time.

Nidhogg 2 expands on the formula of the first game, but without any surprising twists. There are more weapons now. Where in the first game you only had a sword, now the game randomly chooses a weapon after respawning. You can also wield a broadsword, a dagger or a bow. You have to remember that not all of those weapons are equal and demand a different playing style. The broadsword has the greatest melee range, but it’s slow, thus leaving space for a quick opponent to duck and attack. The dagger is the fastest weapon, but its short range leaves you at the mercy of the enemy’s skills. The bow and arrow are a strange addition to a melee fighting game and demand a different approach. You have to remember that you are on the defense in this case and you have to be smart as the opponent can parry your arrow and send it flying in your direction.

You can say that the balance of the weapons is non-existent and you will be right. Messhof is not interested at all in giving you equal chances, Messhof is interested in you playing dirty. You see, Nidhogg 2 really is at its best when playing on the same computer with another human being. It’s the ultimate couch embarrassment game and you can spend hours doing the same thing, running, jumping, fighting, laughing and hating your opponent.

Many players were worried that the graphics introduced to the game will not match the title’s theme. After all, the first Nidhogg was so basic, that it could have been launched back in the 1990s. Nidhogg 2 plastic graphics, though, fit the gameplay perfectly with vibrant colors, strange backgrounds, colorful blood and exploding body parts. After all, you can’t go sightseeing when battling a relentless enemy who can kill you in a manner of seconds. It’s ugly, it’s flashy and it’s great. 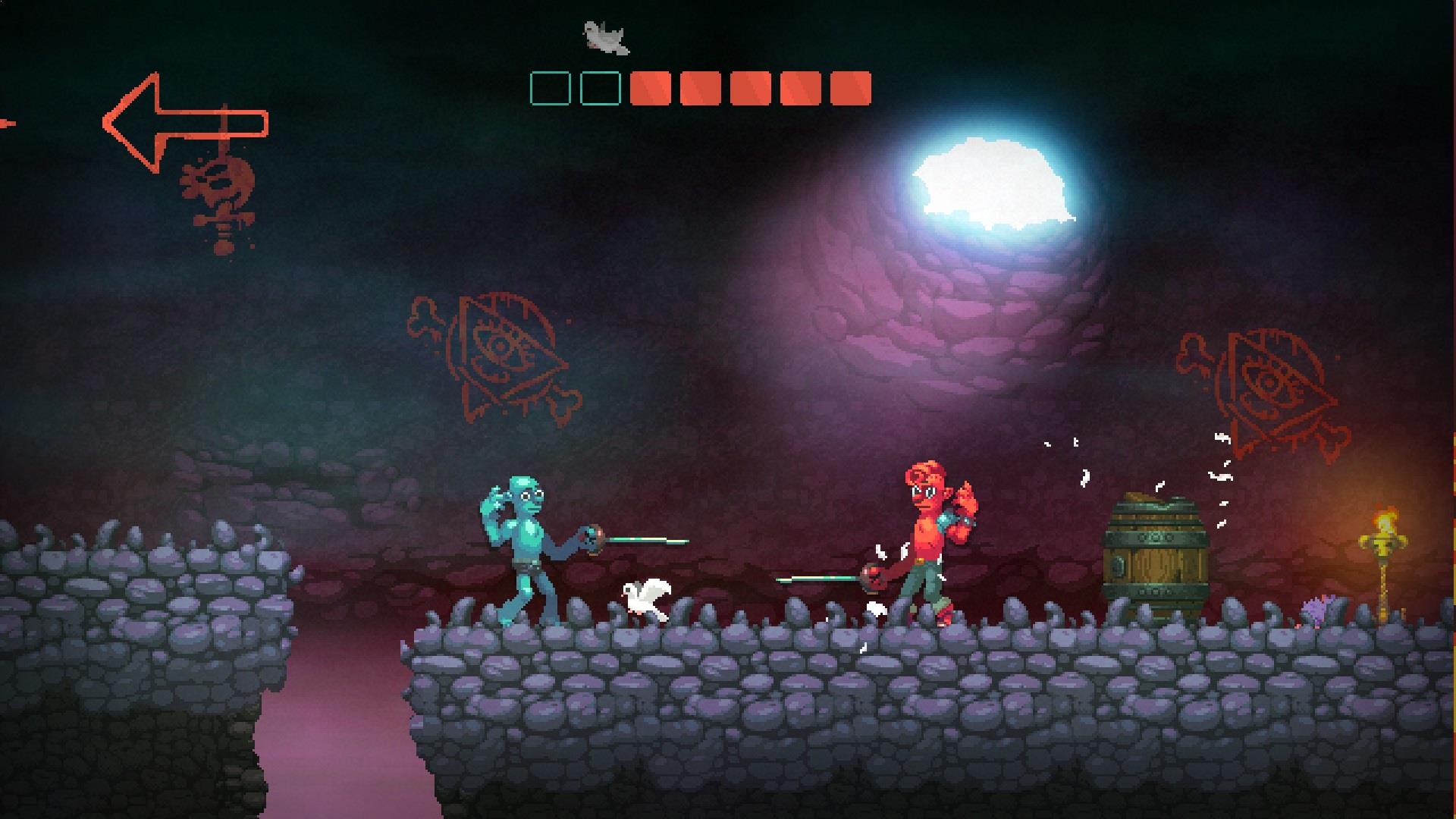 The problem with Nidhogg 2, as is the case with many small indie games, is the price. This is a very specific game, for very specific occasions and a specific brand of gamers. If you loved the first game, you’ll quickly fall for the second. It’s the same gameplay with revised graphics (well, this time around, with graphics), new levels and hours of competitive fun, but those, who don’t like to play with others will probably get irritated by the lack of content. Everything is better with a partner and Nidhogg 2 is no exception.

Draw your blade and shove it into your opponent. Nidhogg 2 is a fast-paced and exciting dueling game.

Every puzzle has an answer. |John Price, Call of Duty 4: Modern Warfare