G2A.COM  G2A News Reviews Shadow Warrior 2 review – Wang It Like You Mean it

Can Shadow Warrior 2 pull a stunt like the rebooted first installment did in 2013? With so many additions, it surely can.

Once, guns were the most important thing in a first person shooter. They were the sense of the game, its core, they gave it its meaning and its tempo. You knew that you’ve already reached the half of the game when you acquired half of the guns. It was that simple.

Then a new generation of shooter appeared. With its limits on the number of firearms you can carry, automatically restoring health and a desire to be serious. It was that last thing that ultimately shaped the first person shooter genre into what it is today, or at least to what it was a year ago. Now, with games like Doom and Shadow Warrior 2 appearing on the market, fans of not so serious shooters that just want you to blow things up finally have something to sink their teeth in.

So, Shadow Warrior 2 has lots of guns and they come in a variety of shapes and sizes. The standard arsenal is there if you like your pistols and your machine guns. Then there are the fun guns, like the sawed-off plasma shotgun Major Fletcher, the automatic nailgun named the Stapler or the Monsoon rocket launcher. And to top things up, there are the fun and crazy guns, like the King Skeletor LMG (covered in skulls), the Eternal Infinitor submachine gun, the Emperor’s Touch powerfist (straight from Warhammer 40,000) or the Destroyer of Realms rocket launcher. So yes, there’s plenty to choose from. 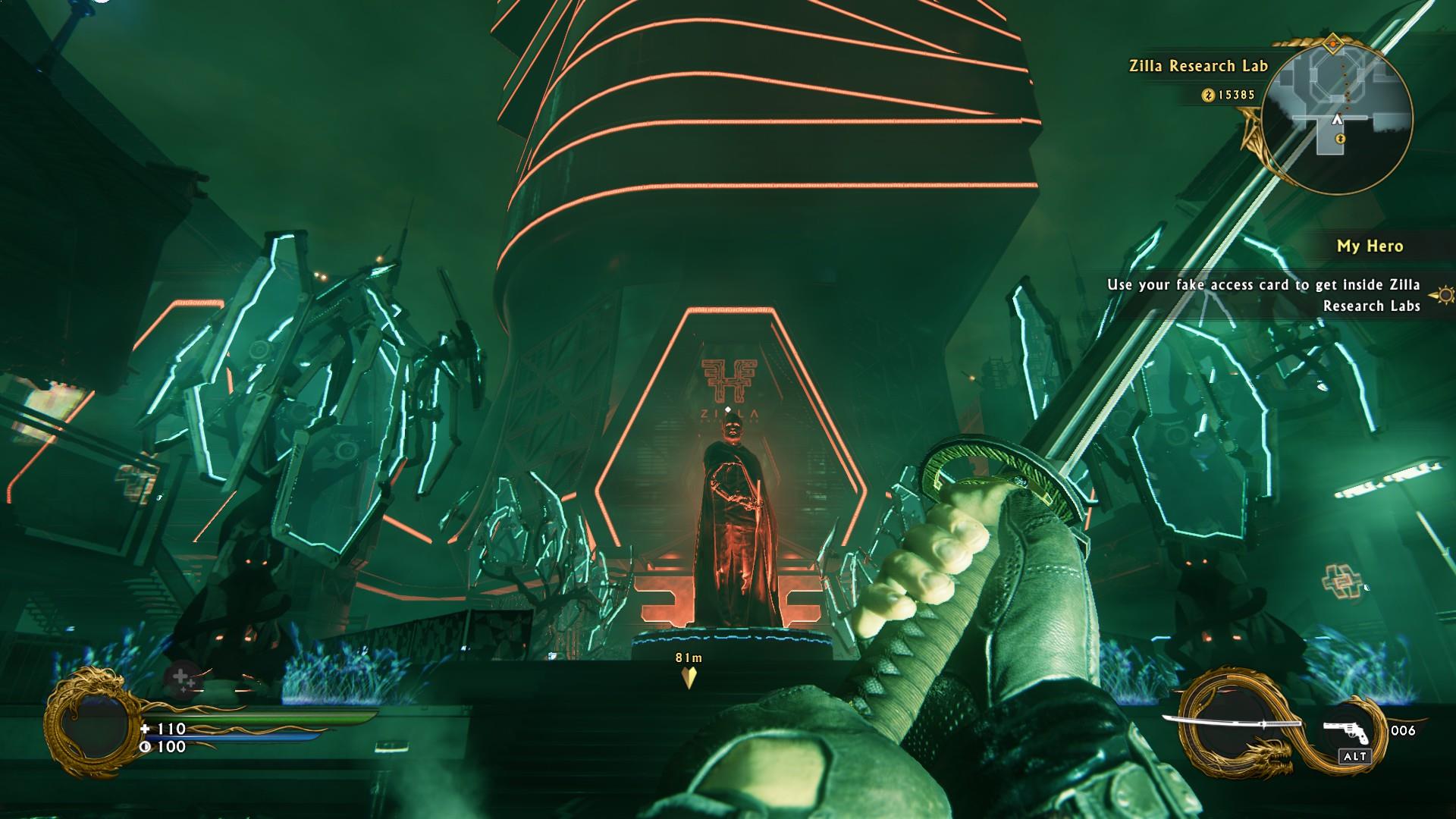 Just as in the case of the first rebooted Shadow Warrior, the story is there, but it’s there mainly as a reason to throw more enemies into your path and give you a new gun to dispose of them with. There’s a teenage girl’s soul ripped from her body and transferred into the protagonist’s head (to provide banter between characters), there are some ancient secrets, nefarious plagues, plotting demons and technological corporations involved (mainly to provide environment diversity).

But all of this, in the end, serves two purposes: to give you cannon fodder to explode and dismember. And provide Lo Wang with a chance to say something stupid. Which you’ll like, because everyone knows that what he says is stupid: his comrades know it, his enemies know, Lo Wang himself knows it and of course, you know it. Everyone’s in on the joke.

Video games, however, are not about the jokes but about the gameplay. Luckily, Shadow Warrior 2 provides a variety of distinct environments for you to play in with slightly randomly generated levels so you won’t get bored that easily. Those levels are quasi-open, so gone are the linear designs of yesteryear. 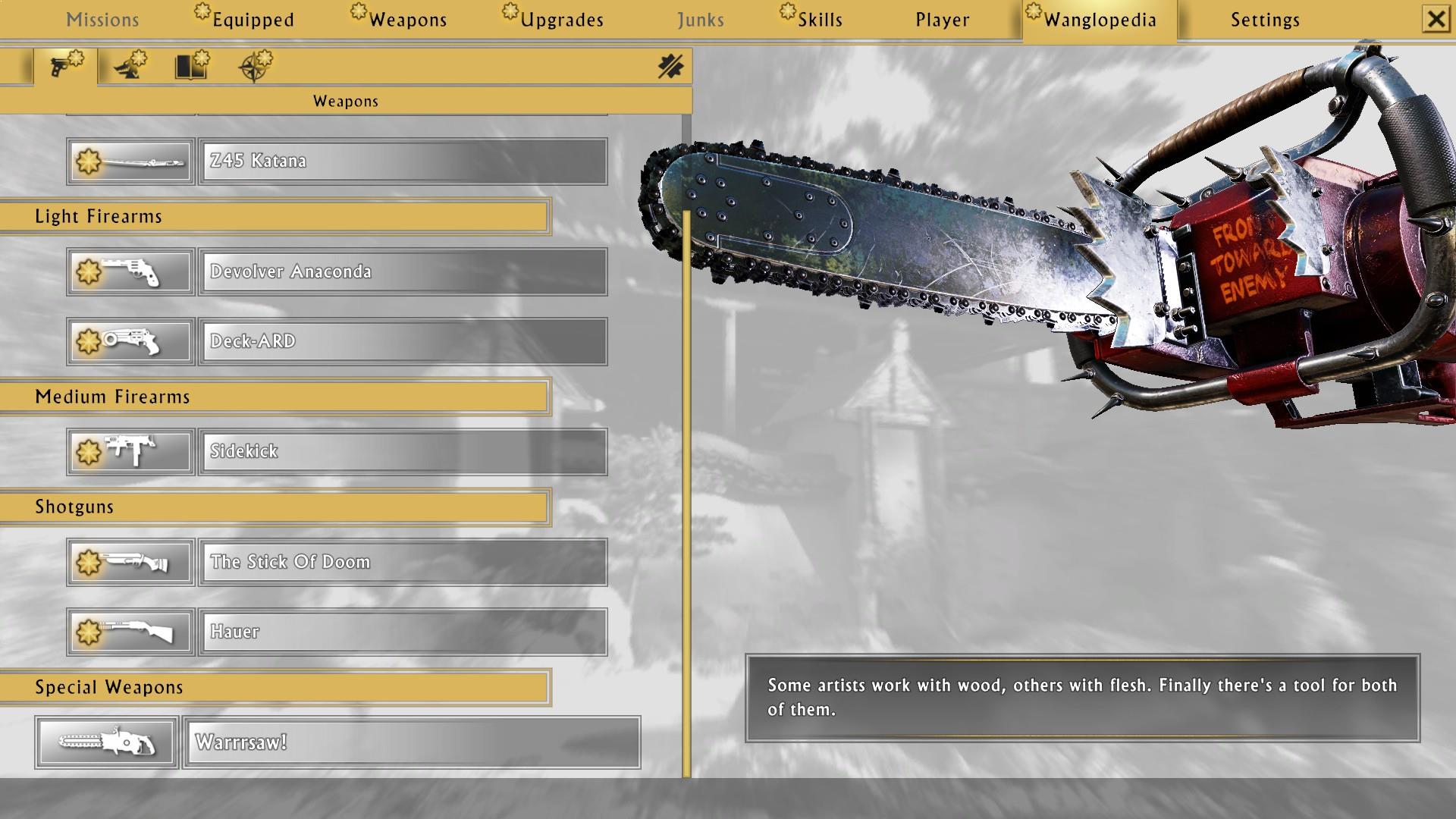 A Bundle of Wangs

On the surface Shadow Warrior 2 looks like a bundle of gameplay elements thrown onto a wall to see what sticks. And the good news is, most of it does.

So, there’s the shooting and gun collecting, which is pretty standard for first person shooters. Then there is the additional loot that monster mobs drop in the form of upgrades that, e.g. add elemental damage to your standard bullet damage. Then there are skills. Oh, and then there’s the combat. Shadow Warrior 2 is not your standard “just shoot it” game. There’s a double jump, dashing, strafing, running, kicking and melee fighting. So in the end Shadow Warrior 2 is fast, responsive and fun. It’s not just about the guns you bring to the fight, but also the skills. If you don’t like the more wacky guns of the later stages of the game and want to stick to your standard katana and pistol combo, you still stand a chance against tougher enemies as the game is skill-based as much as stats-based. Move and you won’t have any problems with surviving, especially so that the enemies are not the most intelligent lot in the world. In most cases backing up and firing is a viable strategy.

And to stir things up even more, there’s co-op, which warrants the comparison with the Borderlands series even further. In the case of Shadow Warrior 2, however, never during the single player campaign will you feel that you are missing out on something, as in the case of the Gearbox series. Borderlands is designed from the ground up with co-op in mind, whereas in Shadow Warrior 2 the mode is just an addition, an afterthought, just another way to add more fun, to play with your friends and to finally see the glorious gore extravaganza that is the Shadow Warrior’s 2 dismemberment system from the outside, not from the eyes of the one doing it. 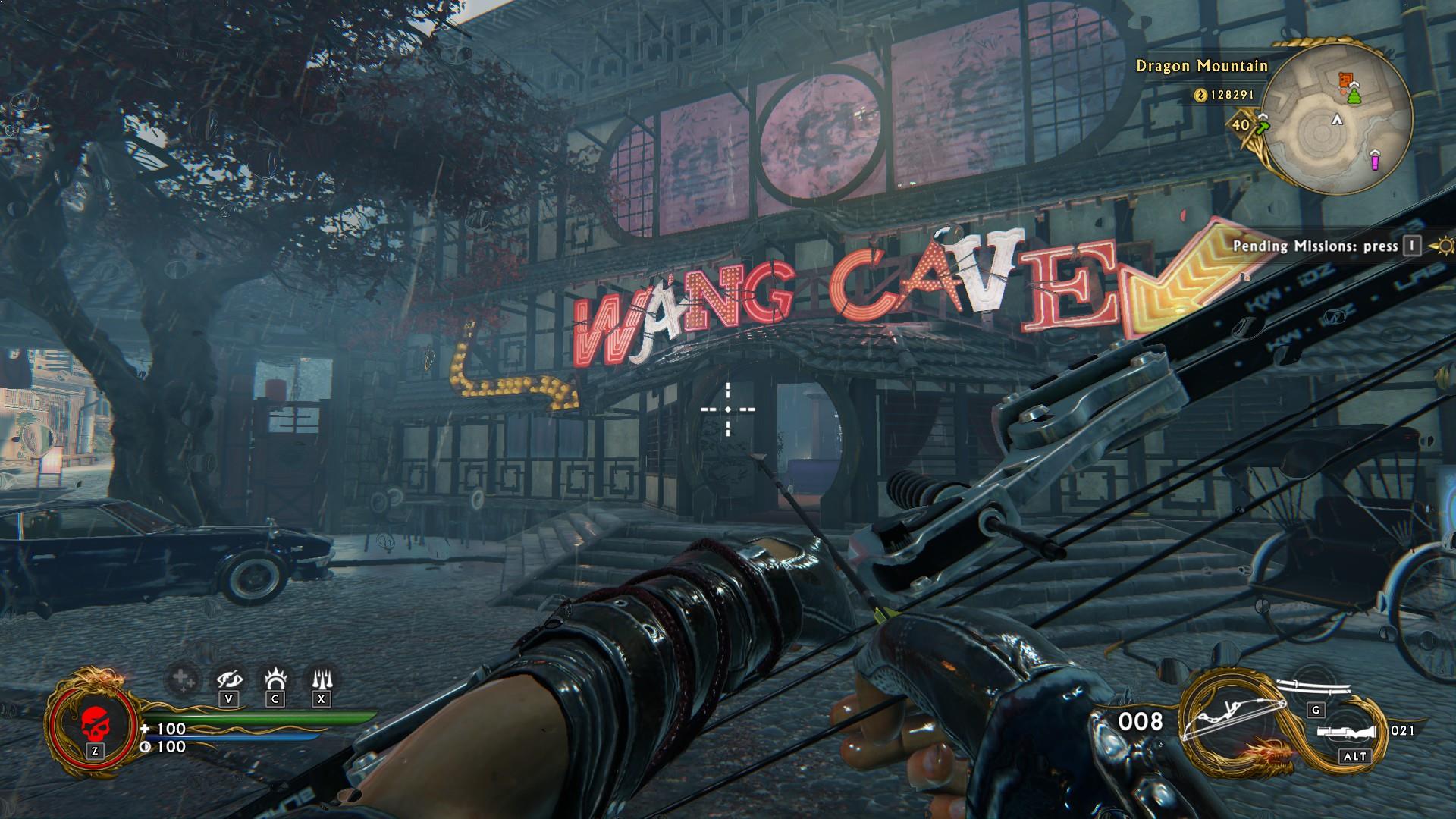 All in all, Shadow Warrior 2 is one of those games that you just can’t stop playing. It’s utterly enjoyable from start to finish, especially if you buy into the whole self-referencing humor right from the get go. The plethora of guns, the streams of gore and legions of exploding heads will surely provide you with fun memories, even if those will be the only thing you will remember the game for in a couple of years. There are plenty of serious games out there, or at least those which take themselves too seriously. Shadow Warrior 2 is a refreshingly not-serious shooter.