G2A.COM  G2A News Reviews The Signal From Tölva review – Wrath of the Machines

With a strong entry into the gaming world with their strange “tweedpunk” procedurally generated survival game, Sir, You Are Being Hunted, the small developer team of Big Robot follows up with The Signal From Tölva, a survival game set on a mysterious planet.

The Signal From Tölva starts with you arriving to the orbit of the titular planet. You are trying to find the source of the cryptic signal coming from the surface. To do that, the player takes control over one of many survey bots roaming Tölva and thus begins a gorgeous journey through the wastes and fields of an alien planet.

What is interesting about The Signal From Tölva is that it focuses on a couple of core elements and perfects them to achieve cohesion.

The game, basically, is about walking and shooting. As you are secretly controlling a survey bot with metal arms and legs, the walking mechanic feels a bit… clunky and heavy. And rightly so. You see, the developers created a game concept that successfully explains the limits of what one small studio can achieve. They didn’t have to focus on proper animation of humans or any living things for that matter, so that they could spend that time on polishing the game world. And what a world it is.

A Walk with a View

The first game you think about after grabbing hold of your first robot is the Borderlands series. The Signal From Tölva is heavily inspired by its cartoonish feels and graphics, but while the Gearbox series connected this with excessive violence and Mad Max-inspired tropes, The Signal From Tölva focuses on the otherness of the environment. Make no mistake, this land is a dump for all kinds of space trash, mysterious cosmic objects, crashed ships and all kinds of derelict mechanisms.

Walking through this world, finding proper way to reach a destination is fun in itself, especially when around every corner and over every hill there waits for us a glorious, mysterious view. How about the corpse of a huge, mechanical human-shaped being, its parts tossed around a peaceful plain? Or a crashed space ship covering most of the horizon, placed in the center of the map?

The Signal From Tölva is arguably inspired by the covers of old science-fiction books, with larger than life spaceships, alien worlds full of rocks and derelicts and funky, over the top bot designs. All of this is visible in the game and for the player to discover.

A Robot with a Gun

And now you think that The Signal From Tölva belongs to a genre that many gamers place on the border of what a video game should really be. Make no mistake, The Signal From Tölva is not a walking simulator as the shooting aspect of the game feels amazingly polished. Not only neutral survey robots roam the surface of Tölva. Enemy bot patrols and rogue units can appear out of nowhere to harass you and destroy your unit. This is why you can’t just stroll around like a happy, metal Frodo Baggins. At the first sight of the enemy you should hide, scan their numbers and plan your attack, if attack you must. It feels like the developers really liked the element of preparation in the Far Cry series, when you pick the order of taking out your enemies.

And when a battle starts, it’s surprisingly similar to Call of Duty in its feel. Various weapons in The Signal From Tölva include long-range rifles, pistols and energy shotguns, so you can pick your enemy’s poison and adapt it to your needs. The means of destruction just feel right, their kick, sounds and effects hitting that sweet spot of fun.

The neutral survey bots are not only for grabs when your unit is destroyed. Very quickly you take possession of a control module that allows you to order them around and soon you have a small mechanical army that will help you in need.

Stranger in a Strange Land

The game borrows heavily from a story-telling trend popularized in video games by the Dark Souls series. If it has a choice of telling you something or leaving it for you to discover, it will always do the latter. With the help of a scanner you can try to guess the purpose of gear on the surface, the origin of enemy bots or the aim of an allied robot party roaming the wasteland. Nothing is said out loud and all the information necessary for the understanding of the game world is out there, in logs, scan information and scarce messages from you “friends” in the orbit.

This means that the game is not plagued by that common issue in video games – over-exposition. Scripts often treat gamers like 2 year olds and explain many times, in great details, the points of the plot like it was all that mattered. The guys at Big Robot understand that the substance of the story is important, but without a proper mode of delivery, or style, even the most interesting story falls flat.

The fact that you have to actively seek information means that when you get to it, you will absorb it. It never gets in the way of all that great walking/shooting, but is always there, placed in base computers and scan info, if you’d like to learn more.

The game world is not procedurally generated, but hand crafted with an eye for details. I really like the mindset of the developers of The Signal From Tölva. They know the limits of indie development and do their best to use those constrains to their advantage. They turn limitations into lore-explained features. The Signal From Tölva takes a different approach than Sir, You Are Being Hunted did with its world and its openness and apparently, it succeeds. Highly recommended to those, who like to patiently appreciate world-building and gorgeous vistas. 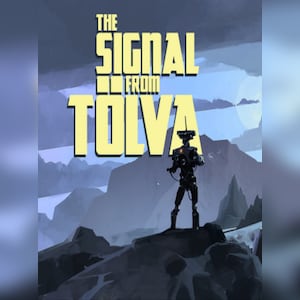