Nostalgia is one of the key forces that have fueled the gaming industry for the last decade, at least on the PC. Can Strafe, a love-letter to the first person shooter of yonder with Quake being the most apparent inspiration, rekindle old memories and stay for long on our hard drives?

Strafe is trying so much. It tried so much before the release with its tongue-in-cheek marketing. It tries so much after the launch with its fast gameplay, cheesy enemies, retro-graphics and well… strafing. Does it succeed? Well…

You are a someone, who is on a spaceship. You pick a gun, teleport to another ship called the Icarus, where swarms of enemies attack. Fight them. Die. Fight them again and watch their blood stain the walls. Welcome to Strafe, your throwback to the first person shooters of the 90s.

Strafe is… well, Strafe is definitely interesting if you belong to the generation of players who were introduced to video games by the likes of Quake. You remember those titles, right? No automatically reviving health, shotgunning ugly creatures to the face in dark corridors. Strafe is just that and really not anything more, but for most of the time it’s ok. Some games needs to innovate, others don’t and sometimes, like Strafe, they just want to throw you into a time machine and remind you what first person shooters looked like 20 years ago.

The flow of the old shooters is very much present in Strafe. You move, you strafe, you jump. Never stop, never wonder what your next step is, because standing in one place may be deadly. Health does not auto regenerate and using med packs may be too costly, so it’s better to always be on the move, either attacking enemies or backing down corridors while trying to hold off another wave of maniacs with blades for hands.

Strafe, however, is not very keen on explaining how it works in the case of things a bit more complex that shootin’ and strafin’. There are upgrades and powerups for you weapon, but until you find that out for yourself, you just won’t know that you should look for them. And this can become problematic because of the whole “constant dying and repeating level” thing.

The other problem is the guns. The id games of yonder were excellent because of their iconic weapon design. Sure, each of us had our favorites, but all of them were exceptional, maybe because we still were in the baby days of the genre. Strafe actually cannot offer anything even close to the original shotgun or rocket launcher in terms of design and experience. They feel like pop guns most of the time and while your enemies will lose their heads and have their blood sprayed all over the nearby walls, they lack the kick and the smack you should expect. This, in turn, is a result of the hyper-active, 90s-style movement schematics. Balancing the feel of a gun with super-quick movement (and strafing) is just so damn hard.

Fortunately the effects of using the guns are appropriately over the top. Enemies explode and spread their gore on the environment so that each level quickly becomes a set of red-smeared murder rooms. The opponents are varied, although they do tend to have just one tactic in mind. When they see you, they simply sprint towards trying to rush you with superior numbers. Even the one with distance attacks tend to fall for the simplest of traps of backing out and waiting behind the corner. It is, of course, all related to the shooters of the 90s, where attacking and then falling back, all guns blazing incessantly, was the best way to win. Until you hit your back on a melee attacker that run from the other end of the level, that is. This is the best way to start the game all over again.

Strafe has one advantage over the shooter of yonder and that is procedurally generated levels. I can’t really say how many times I’ve seen the first levels of Quake in the days of no cloud save storing, but the experience of replaying the same first hour or so each time I decided to finish the game this time, led to quick boredom. Strafe, being a rogue-like with rare spawn points, tries to solve this problem with procedurally generated rooms and it mostly succeeds, even if most of the halls are a bit alike after a few tries. Remember, this is a rogue-like so get used to the thought of replaying from scratch.

The upside to all of this is that Strafe can become a deeply engaging game of shooting and dodging without giving a second thought to the “whys” and “wheres” of the story of the world presented. The shooting and movement are solid enough to immerse you in waves of memories, bringing back the times when your mom and dad had no idea that you are trying to battle zombies with an axe in your room, desperately looking for ammo crates to reload your grenade launcher with the Nine Inch Nails soundtrack pounding in the background. Ah, good times.

Strafe is an engineered blast to the past, hitting all the right marks, nodding in all the right moments and maniacally greening to the player in every aspect of the gameplay. The problem lies, however, in its lack of its own thing. Nostalgia is a great base for expansion, but when it is the sole driving force behind the concept of the game, it quickly wears out. Strafe is fun, if a bit forced at times, but in small doses. 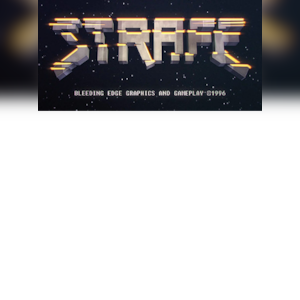