Well, isn’t this a match made in heaven? For years now fans of the Warhammer Fantasy Battle universe and the Total War series dreamt about a game that would connect both in one awesome bundle. And lo and behold, it is finally here.

This game has probably been the hardest entry to create in the Total War series and Creative Assembly knew that. After all, the map is divided not into countries, which differ from each other in minor aspects and a few units, but into territories occupied by completely different races. This is why one half of the game, the turn-based kingdom management on the world map, consists of two types of conquests.

The first one is battling your neighbors which are mostly of the same race as you are. This is especially visible in the case of the Empire campaign, which eases the players into the game, as by fighting similar armies at the beginning you learn the basics of managing your state, preparing the army and launching attacks. Once you deal with pesky rebellions and create a human alliance by sword or smooth words, it’s time to set your eyes on other territories. And this is when the real fun begins. Dwarfs versus Greenskins. The Empire vs the Vampire Counts. The Chaos versus… well, everybody else.

The base game will grant you the option to play as the Empire, Dwarfs, Greenskins, Vampire Counts or the almighty Chaos. Additional DLC allows you to choose the Wood Elves, Beastmen or Bretonnia. What is the most important aspect of the great campaign is the fact that each of these factions plays differently, with various goals and points of focus.

The Vampire Counts, for example really need to creep west into the Empire territory and remember about those Chaos bad boys that like to appear out of the blue in the north. The dwarfs are almost always focused on battling orcs, so in the beginning you don’t need to worry about them and their pesky boom sticks and axes. As an undead faction you have many non-standard means of spreading your reign in the world. Vampiric corruption is a great way to destabilize neighboring regions with undead rebellions, but on the other hand it gives your enemy a heads-up that you’re coming. And when you are preparing to wage war on the world of the living, you can quickly raise the dead to fight by your side, although fielding a big army is a costly endeavor. As with all the races in the Total War Warhammer roster, knowledge of your particular skills is key to victory.

The Greenskins, on the other hand, rarely think about the intricacies of managing their treasury as they can always raid another town, pillage it and fall back to their mountain camps. Their main concern at the start of the game is the morale of the units. Goblins fall apart really quickly, the same goes for basic orc units. If you are overwhelmed, don’t expect any heroic deeds. This doesn’t mean, however, that you should stay in one place and gather an army and then assault. Oh no. The key to playing the Greenskins in Total War Warhammer is constant harassment of other regions to build the fightiness of your tribe to launch a proper Waaagh!, that is an independent army that will help you in spreading mayhem.

Especially at the beginning of the campaign fighting the Greenskins, who can field large armies quickly, is a bit of an annoyance. They tend to irritate you with a raid or two and withdraw into mountain passes when threatened. If you decide to pursue, well, you’re leaving your territory up for grabs.

Selecting a faction, then, is not just the case of choosing the “horsemen” nation or the “archer” country. Now the race you select defines the goals, means and tactics. The Empire, for example, is your standard “for the Emperor” army consisting of melee and missile infantry, cavalry and artillery. That is, until you add mages and flying mounts. Or a mage on a flying mount, they’re the best. Add in a heroic character and you have a balanced force that can go on offence or withstand the attack of the enemy and then bite back.

The Dwarfs, on the other hand, are more defence-focused with strong, slowly moving units that like to get close and personal once their artillery delivers powerful blows to the attack plans of the enemy. The Greenskins strength lies in their numbers and harassment tactics. Everyone will find a faction that fits their battle needs.

The spectacle of battle

The real-time battles are the second major aspect of the Total War series and never have they been as spectacular as in Total War Warhammer. The addition of mages, spells, flying mounts, monsters and beasts creates a sight to behold with units being blown away by clubs, burned by magic fire or kicked by a giant’s feet. The battle sections may be a bit of a burden for slower PCs with hundreds of moving units, magic graphical effects and other fireworks, but believe me, they are worth the purchase of a new GPU.

And while many more traditional Games Workshop fans didn’t like what Creative Assembly did to some of their most beloved characters and races (especially in the case of Wood Elves invading other regions, when in truth all that they cared about was hugging their trees in peace), the truth is that the developers really had no choice. It was either change some stuff and create this glorious spectacle of blood and magic, or pass.

All in all this is indeed a game that successfully connects both IPs into something truly glorious. If you are into fantasy, battles, maps and WAAAAAGHS, you should not hesitate, hundreds of hours of gameplay await. And with the recently announced Total War: Warhammmer II, that will expand the base game two times, this might prove the most complete Total War package ever released. 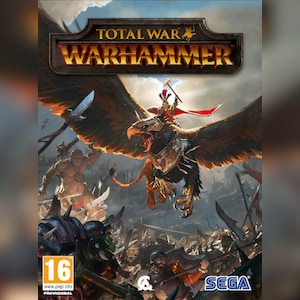